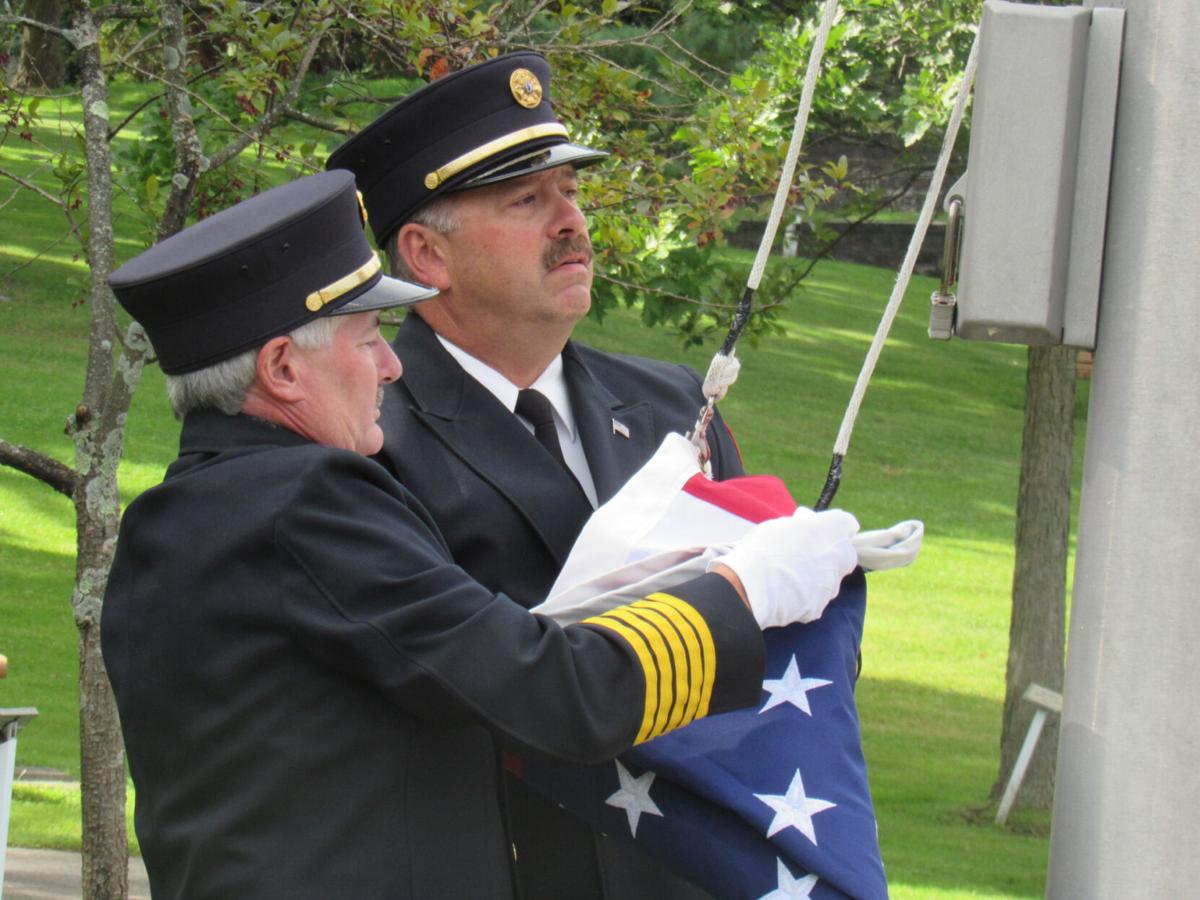 Billy Kearns and Tim Beaulieu, past chiefs of the Massena Volunteer Fire Department, lower the flag during a ceremony Saturday morning to remember the victims of Sept. 11, 2001. Bob Beckstead/Watertown Daily Times 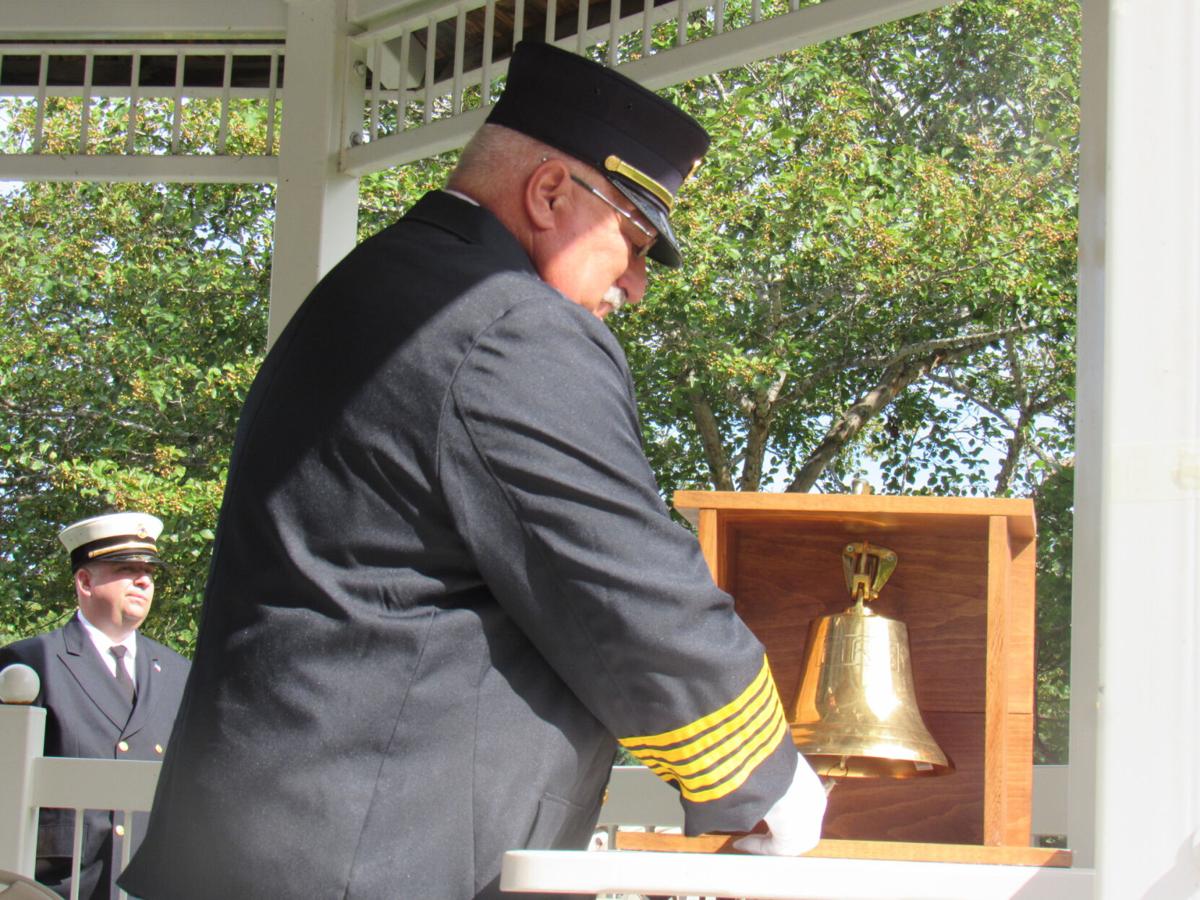 James Debien, who was acting chief on Sept. 11, 2001, rang a bell four times, each with five strikes and a short pause in between during Saturday’s 9/11 remembrance ceremony. Bob Beckstead/Watertown Daily Times 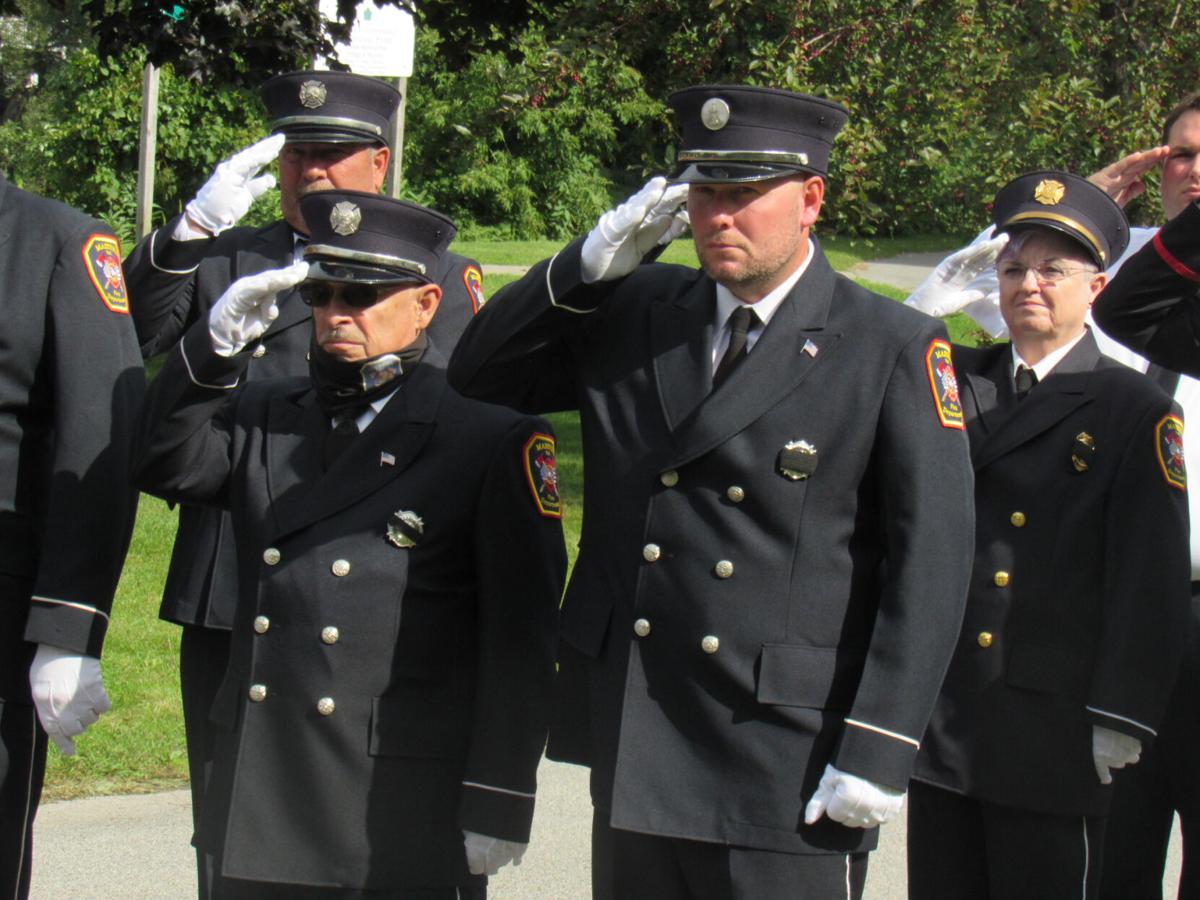 Members of the Massena Volunteer Fire Department salute as Taps is played during a 9/11 remembrance ceremony that was held Saturday morning in Veterans Memorial Park. Bob Beckstead/Watertown Daily Times 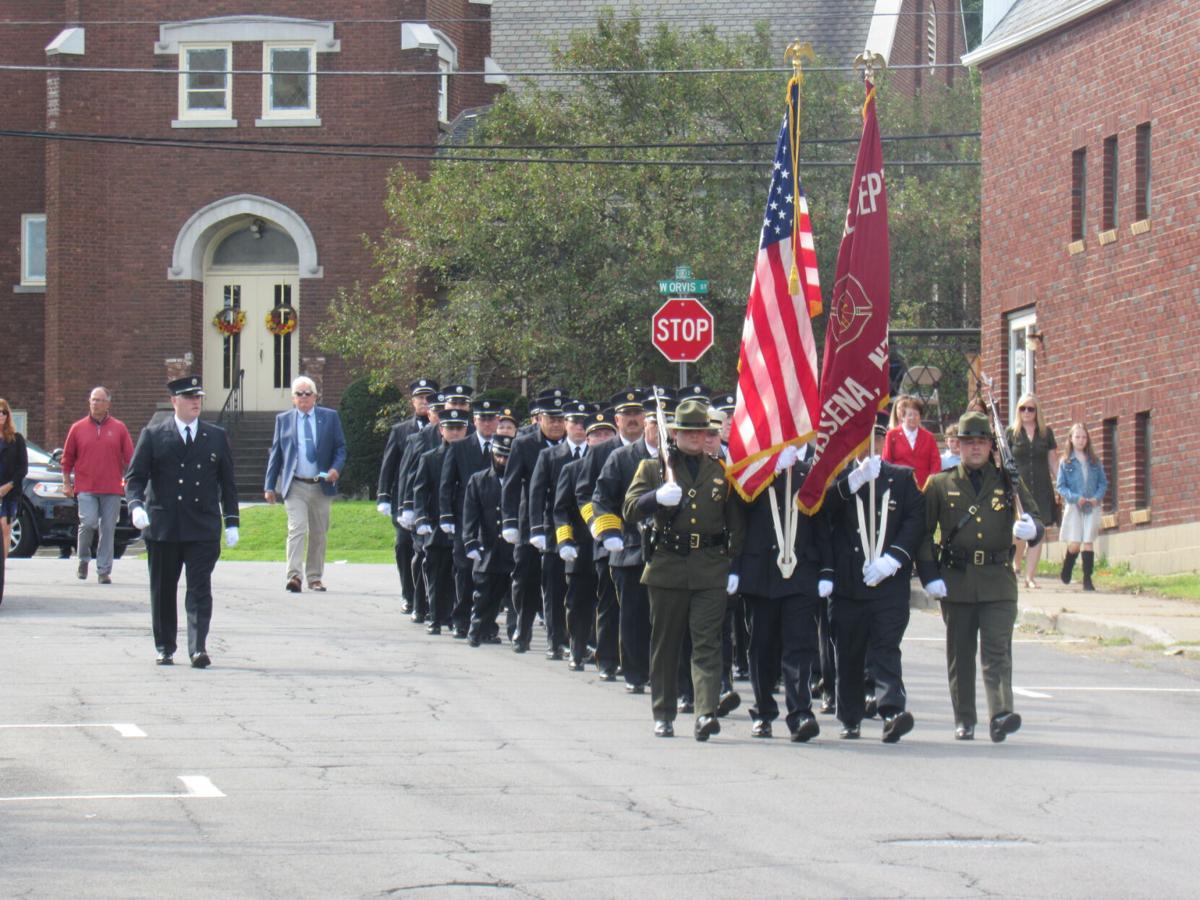 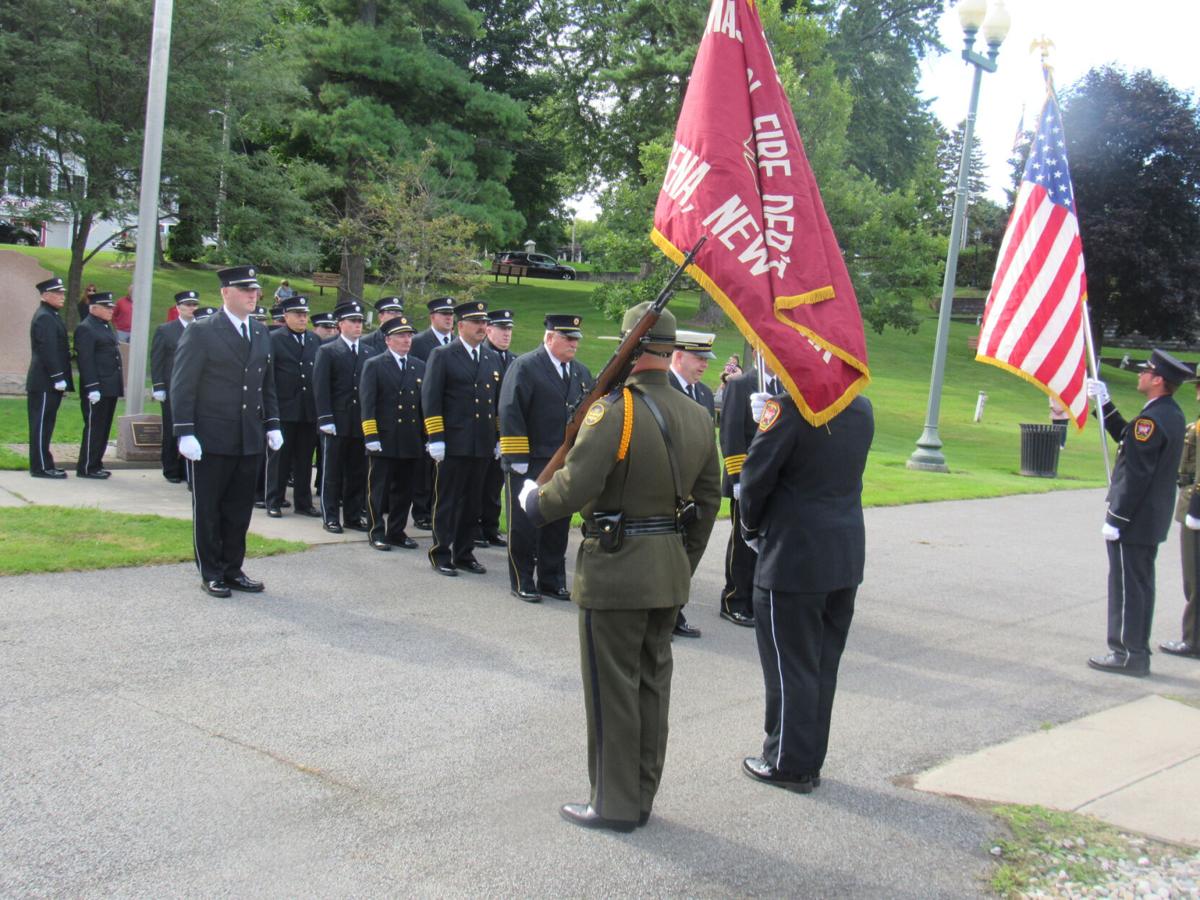 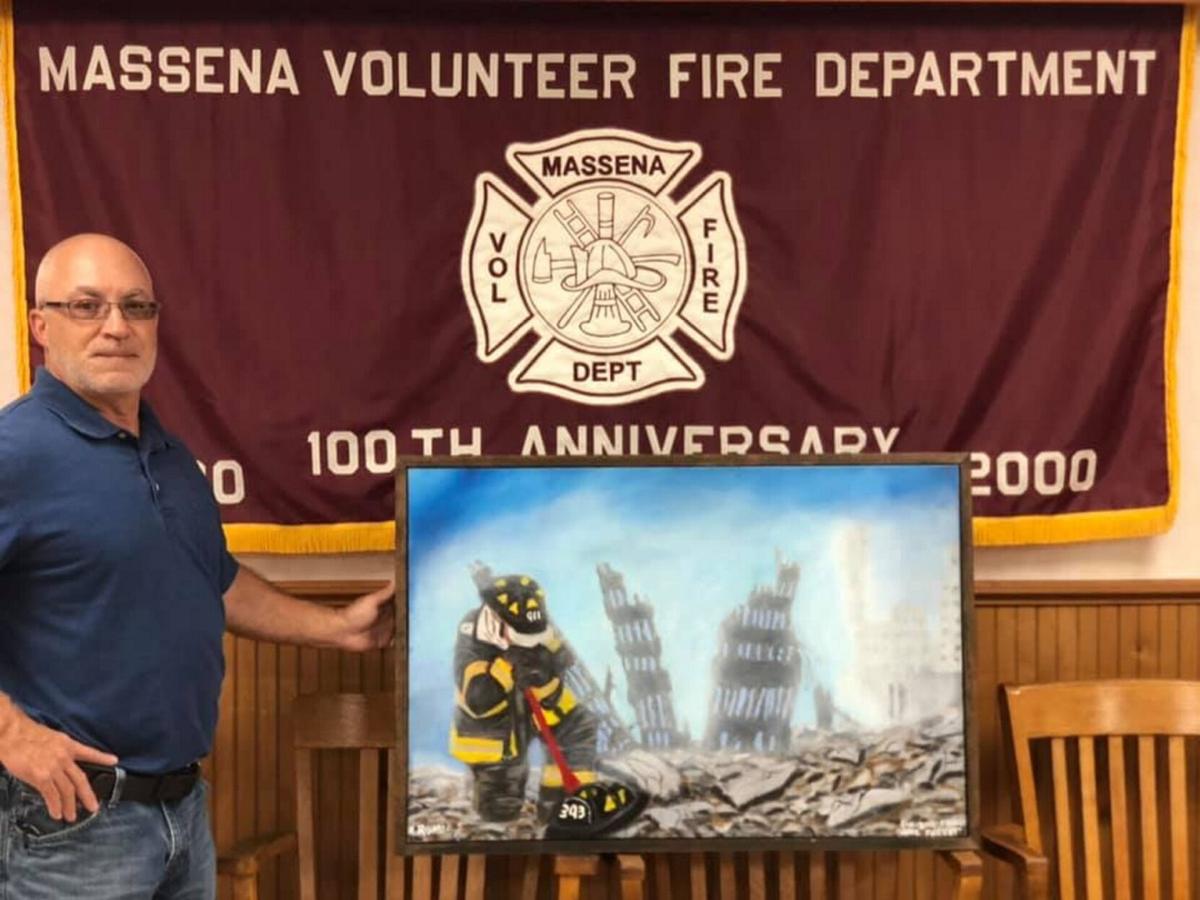 Billy Kearns and Tim Beaulieu, past chiefs of the Massena Volunteer Fire Department, lower the flag during a ceremony Saturday morning to remember the victims of Sept. 11, 2001. Bob Beckstead/Watertown Daily Times

James Debien, who was acting chief on Sept. 11, 2001, rang a bell four times, each with five strikes and a short pause in between during Saturday’s 9/11 remembrance ceremony. Bob Beckstead/Watertown Daily Times

Members of the Massena Volunteer Fire Department salute as Taps is played during a 9/11 remembrance ceremony that was held Saturday morning in Veterans Memorial Park. Bob Beckstead/Watertown Daily Times

MASSENA — It has been 20 years since the terrorist attacks of Sept. 11, 2001, but Massena firefighters still remember the horror of that day.

Members of the Massena Volunteer Fire Department gathered Saturday morning in Veterans Memorial Park to remember and honor those who lost their lives that day in separate attacks on the World Trade Center’s Twin Towers in New York City and the Pentagon in Washington, D.C., and in a plane crash in the Pennsylvania countryside.

“I want you to think about the events from 20 years ago and how they changed the world. I want you to take a moment of silence for the almost 3,000 people that lost their lives that day. I want you to remember the images of those first responders and the civilians from that day. And I want you to never forget,” Shawn Hartford told the crowd at the park.

Prior to the ceremony, the firefighters had assembled at Emmanuel Congregational United Church of Christ for a service by the Rev. Judith VanKennen, the department’s chaplain.

Each siren lasted approximately 57 seconds, totaling 343 seconds for the six events, one second for each New York City Fire Department firefighter who lost his or her life that day.

Mr. Hartford said he remembered where he was and what he was doing when he received news about the attacks. He was at Alcoa when one of the drivers called and told them to turn on the radio.

“At first we thought it had to be an accident, but after the second, third and fourth planes hit we knew it was not,” he said.

In the case of Flight 93, passengers were informed of that day’s events via cell phone and attempted to overpower the hijackers.

Mr. Hartford said the New York City Fire Department responded to the World Trade Center with 121 engine companies, 62 ladder companies and 27 fire officers and, for the first time in more than 30 years, all off-duty firefighters were called in.

The department also deployed its hazardous materials unit, mobile command center, field communications unit, all five rescue units, both of its high-rise units, six of its seven squad units and one of its two tactical support units.

“At 9:59 a.m. Tower Two collapsed, killing many civilians and first responders and destroyed the FDNY incident command post. In all the commotion, most responders inside Tower One did not know of the collapse or the order to evacuate. They continued to try to get victims out of harm’s way. At 10:29 a.m. Tower One collapsed,” Mr. Hartford said.

He said 75 firehouses lost firefighters that day, the New York City Fire Department lost its department chief, first deputy commissioner, one of its marshals, one of its chaplains and other administrative personnel.

“Three hundred forty-three of New York’s greatest lost their lives that day. Twenty-three New York police officers, 37 Port Authority officers, eight EMTs from private EMS companies and home patrolmen from the New York Border Patrol all lost their lies that day in what would become the single deadliest attack in human history,” he said. “May they all rest in peace and we will never forget.”

“For those of us who are old enough, we remember the personal pain and hardship of that day and, for most us, what we knew that day was true fear. We remember the disbelief of what was happening in front of us on TV screens; the concern for family, friends and strangers in and around Manhattan. We remember the worry caused by the unknown, and the fear as to what could come next,” Mr. O’Shaughnessy said.

He said that day’s events brought the nation together.

“Communities came to support one another, and the very fabric of our national spirit was strengthened,” he said.

Mr. O’Shaughnessy said one positive came out from the events that day, “that we ensured that our front line, emergency staff, including police, fire and rescue, have received education and preparedness training. These honored positions of service are sometimes difficult to fill because of the hard work and training they entail. We are very grateful for those who have persevered and worked hard to be capable to protect their communities.”

Mr. Ahlfeld said it was nearly impossible for anyone who was alive that day to forget where they were when it happened.

“Whether you were a student in school, at work, enjoying the outdoors or watching television, the instant that the words September 11 come up, all of us instantly flash back to that horrific day. We can remember every emotion, every thought for our family members’ safety and the sudden silence that enveloped our country. We were glued to the television, we were seeking details, we were united in our conviction to catch the animals that did this,” he said.

Mr. Ahlfeld recalled how everyone came together that day.

James Debien, who was acting chief at the time, rang a bell four times, each with five strikes and a short pause in between. Mr. Hartford said that, among other things, “striking the four fives” signified the death of a firefighter in the line of duty or some important official or person.

Past chiefs Billy Kearns and Tim Beaulieu lowered the flag as Taps echoed throughout the park.

Following the ceremony, past member Mike Romeo visited the station. He had taken a few different images from Sept. 11, 2001 and painted a portrait in honor of the lives that were list, and presented it to the department.