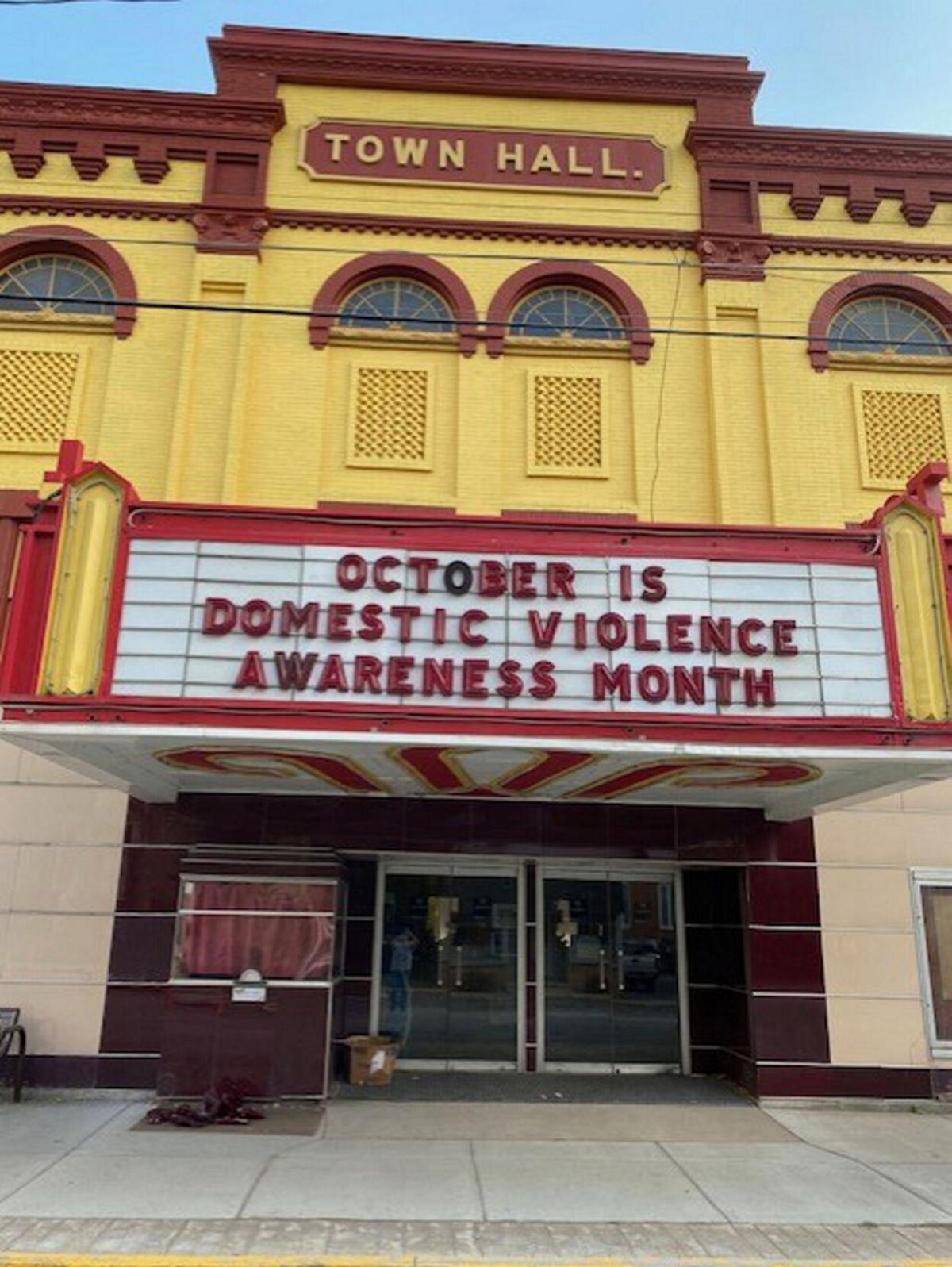 The owners of Lowville’s Town Hall Theater received a grant of $78,675 to cover some financial losses caused by the COVID-19 shutdown, which left movie theaters closed for over 15 months. Watertown Daily Times 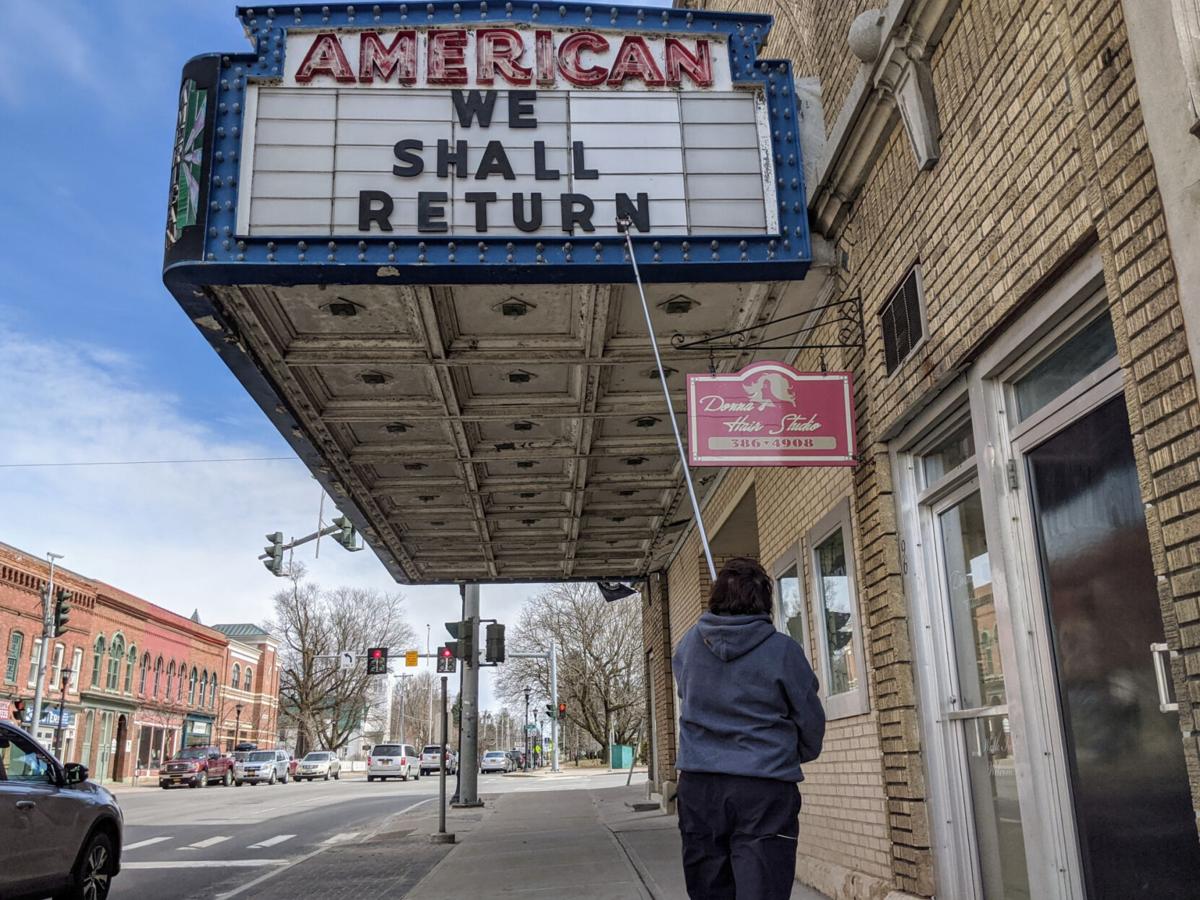 Laurie Poor adjusts the last letter she placed on the American Theater’s marquee in Canton on March 16. The theater, one of four owned by Potsdam-based J.S. Cinemas, was closed for over 15 months, and the company recently received a $1.09 million grant to cover some of the financial losses caused by that shutdown. Tom Graser/Watertown Daily Times

The owners of Lowville’s Town Hall Theater received a grant of $78,675 to cover some financial losses caused by the COVID-19 shutdown, which left movie theaters closed for over 15 months. Watertown Daily Times

Laurie Poor adjusts the last letter she placed on the American Theater’s marquee in Canton on March 16. The theater, one of four owned by Potsdam-based J.S. Cinemas, was closed for over 15 months, and the company recently received a $1.09 million grant to cover some of the financial losses caused by that shutdown. Tom Graser/Watertown Daily Times

North country venues and movie theaters that had to close for the COVID-19 pandemic have received a little help, thanks to a Small Business Association grant program.

The SBA has finished distributing the awards from the Shuttered Venue Operators Grant, directed toward any live performance venues or movie theaters that had to close their doors during the pandemic. In Jefferson, Lewis, St. Lawrence and Oswego counties, nine venues applied for and received a combined total of $2,678,417.

Most of the money was distributed by mid-August, according to recipients. According to the SBA, the program had over $16 billion available nationally, and each applicant was eligible to receive a grant of 45% of their gross earned revenue, up to a maximum of $10 million.

In Jefferson County, the Thousand Islands Performing Arts Fund in Clayton received $87,561, and Humble Farms, Inc., owners of the Dancing Dog Cafe and Bar in Alexandria Bay, received $26,899, the smallest amount of any north country venue.

The Disabled Persons Action Organization foundation, which has hosted a summer concert series in the city annually for over 40 years, received $275,251. Last year’s concert series was the first to be canceled wholly since the series began.

Tim Dermady, DPAO Foundation director, said the Shuttered Venue Operators grant was a “blessing” that allowed the concert series to go forward this year and helped save the foundation from having to radically restructure.

“Number one, it kept us in business,” Mr. Dermady said Wednesday. “The foundation was able to keep the entire staff on.”

Mr. Dermady said the grant covered the costs of payroll for 2020, when the foundation had no concert series income at all, and has covered payroll thus far in 2021 as well.

It also allowed the DPAO to host its annual concert series again, making the expenditures necessary to bring musical acts to Watertown amidst the uncertainty of a pandemic.

“It’s been an interesting summer,” he said. “We had the first show, Dustin Lynch, canceled, one of the band members was sick, so it helped cover the costs there.”

In Lewis County, only one organization applied for grant money — Lowville’s Town Hall Theater. The movie theater applied for and received $78,675.

Jeff Szot, owner of J.S. Cinemas, said the grant has ensured the survival of the local movie theater chain. Movie theaters were kept closed the longest out of any industry in the state, and Mr. Szot said he didn’t reopen his theaters until June, meaning they were closed and not generating revenue for over 15 months. At the same time, bills, taxes and other costs continued to accrue without pause.

“At a couple of locations, we had a massive amount of rent, so I don’t know where we would have come up with the money to recover from that,” Mr. Szot said.

He said he’s hopeful the movie theater industry will recover, but the situation has to be right for that to happen. Currently, he said customer numbers at the company’s theaters haven’t been great, partially because the movies being released right now are not very appealing to large audiences.

He said, as the outlook on the pandemic darkens and cases begin to rise in the region, he’s worried about the future.

“The grant runs through the end of the year, and it allows for payroll,” he said. “We’re covered to that point. Once that happens, the industry needs to be better recovered.”

Thanks to the Biden administration and congress real money has been put in the hands of real people. The Shuttered Venues program is just one example. All of those stimulus checks to individuals, all of the moneys to states which in turn distributed those moneys to municipalities including local towns and villages, and through state agencies, to many other groups that othersive would have gone out of business including the not for profit sector. For one, NYS has finally recoevered moenys from the federal governement somewhat commensurate with what NYS taxpayers pay to the feds in unfair rates compared to many other states. Thank you NYS elceted officials for pushing the virus recovery programs forward over the past year and a half. I'm speaking about the former governor, our 2 senators, and the state legilature.