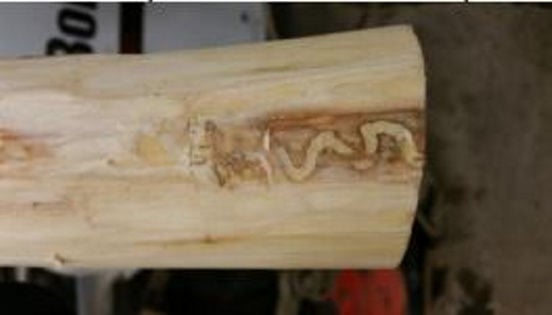 Evidence of ash borer can be seen in this tree examined by Northwest Tech students in Ogdensburg. Contributed photo 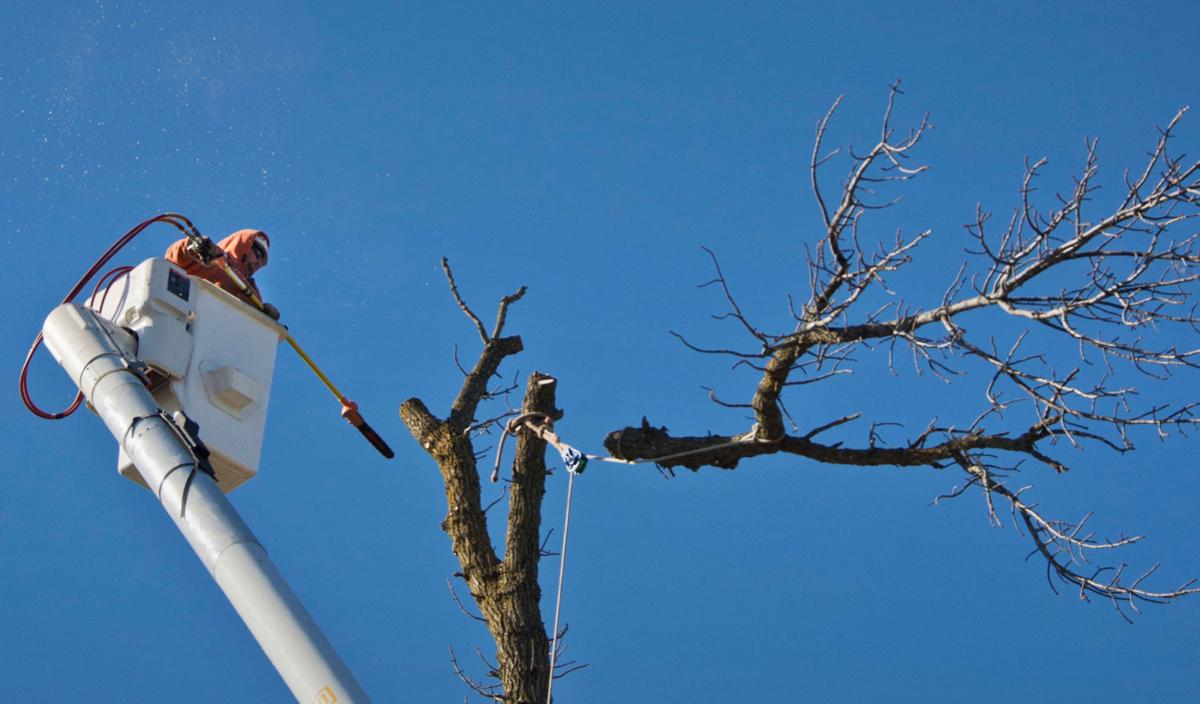 An Asplundh arborist takes down an ash tree on the corner of Green and Bigelow streets in Ogdensburg in 2017. File photo

Evidence of ash borer can be seen in this tree examined by Northwest Tech students in Ogdensburg. Contributed photo

An Asplundh arborist takes down an ash tree on the corner of Green and Bigelow streets in Ogdensburg in 2017. File photo

OGDENSBURG — When a class of students from Northwest Tech inspected some ash trees from the BOCES property in Ogdensburg it left no doubt that the emerald ash borer had arrived in the Maple City.

“They chopped some trees down and brought them back and peeled them,” Ogdensburg Director of Parks and Recreation Matthew Curatolo said.

“When they were doing the peeling of the bark, they found the telltale signs of EAB,” Mr. Curatolo said.

The City has been following a plan devised by the Tree Commission 2017 in preparation of the eventual arrival of the invasive species and has already removed about 90 percent of ash trees on public property in the city, according to Mr. Curatolo.

According to the Tree Commission the City had about 170 ash trees when the work to remove them began.

“National Grid helped us remove a number of them,” Mr. Curatolo said.

In the spring the New York State Department of Transportation took down 11 ash trees near the downtown mall parking lot.

In both cases the city’s Department of Public Works hauled away the downed trees.

Trees on private property are the responsibility of the property owners, Mr. Curatolo said.

While the arrival of the invasive bug has not been confirmed by the Department of Environmental Conservation, Mr. Curatolo said the City feels confident in the findings of the students.

“They spread really quickly,” he said.

The green, metallic-looking beetles devastate each stand of ash they find, wiping out nearly all of the trees they encounter.

Natives of Asia, the larvae of the invasive species feed under the bark of ash trees, blocking the flow of nutrients. Once infected with the beetle’s larvae a typical ash tree will die over a two-to four-year span, according to experts.

Once an ash tree is dead on the stump, they present a danger in municipal environments because they have a tendency to snap off and topple to the ground, according to St. Lawrence County forestry officials.

Ash trees at Groulx Park have been spared for now after being inoculated with a pesticide to try to save them from the bug.

“They are large adult ash trees still in good condition,” Mr. Curatolo said. “We did a little project to see if it work and how long it will work.