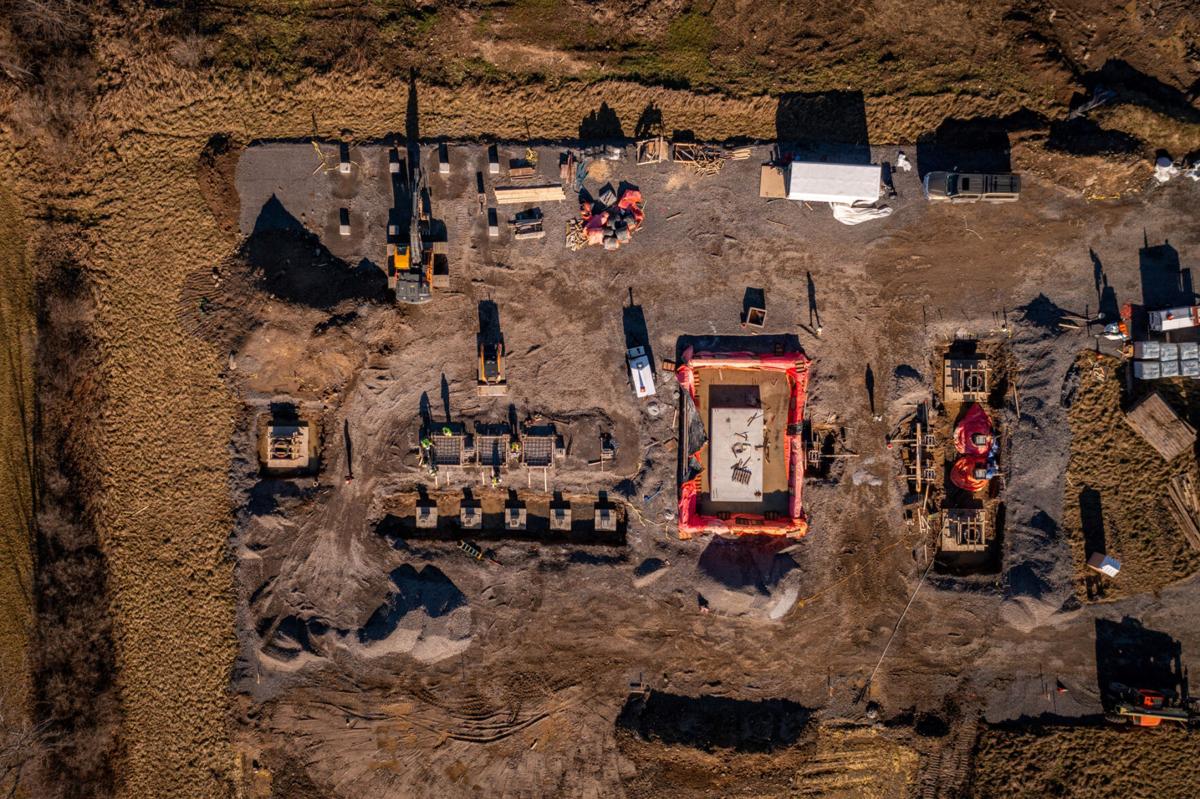 Construction began on the Number Three Wind Farm in the towns of Harrisburg and Lowville and the substation in the town of Lowville over the summer. Provided photo 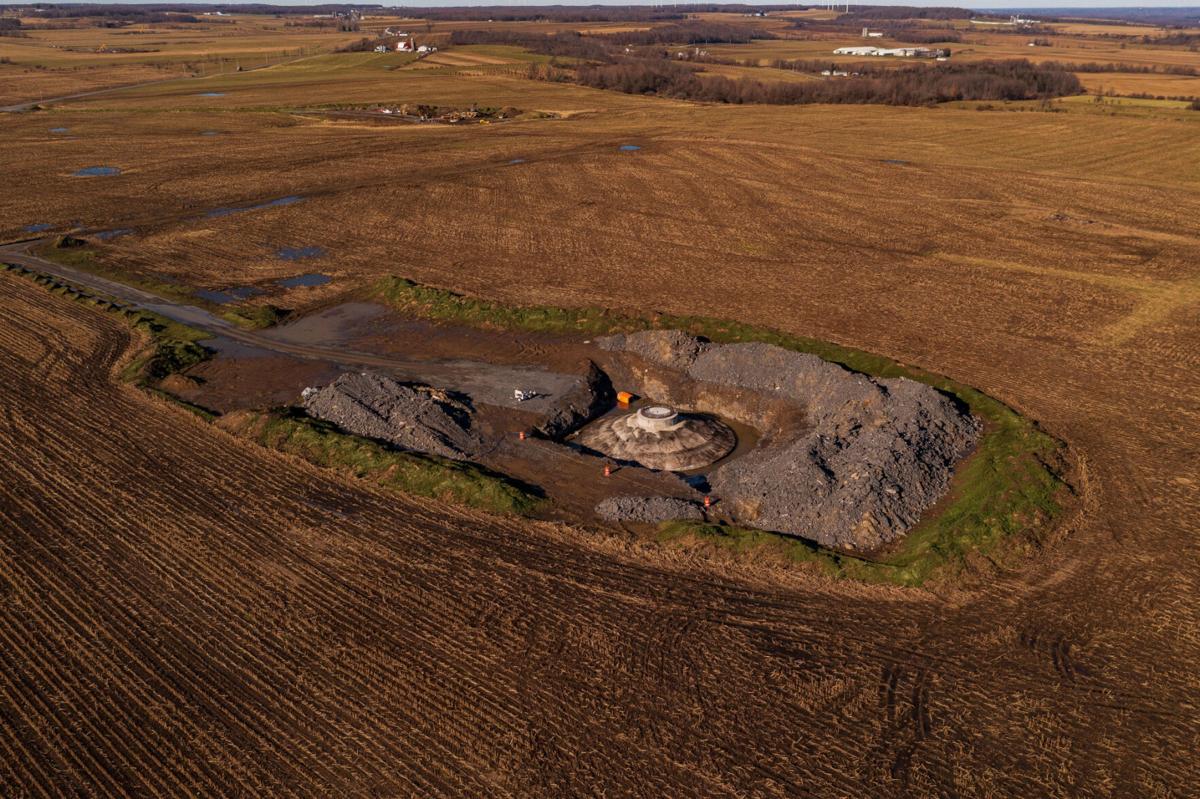 A bird’s eye view of a Number Three Wind Farm turbine foundation being constructed during the fall months in the town of Harrisburg. Provided photo 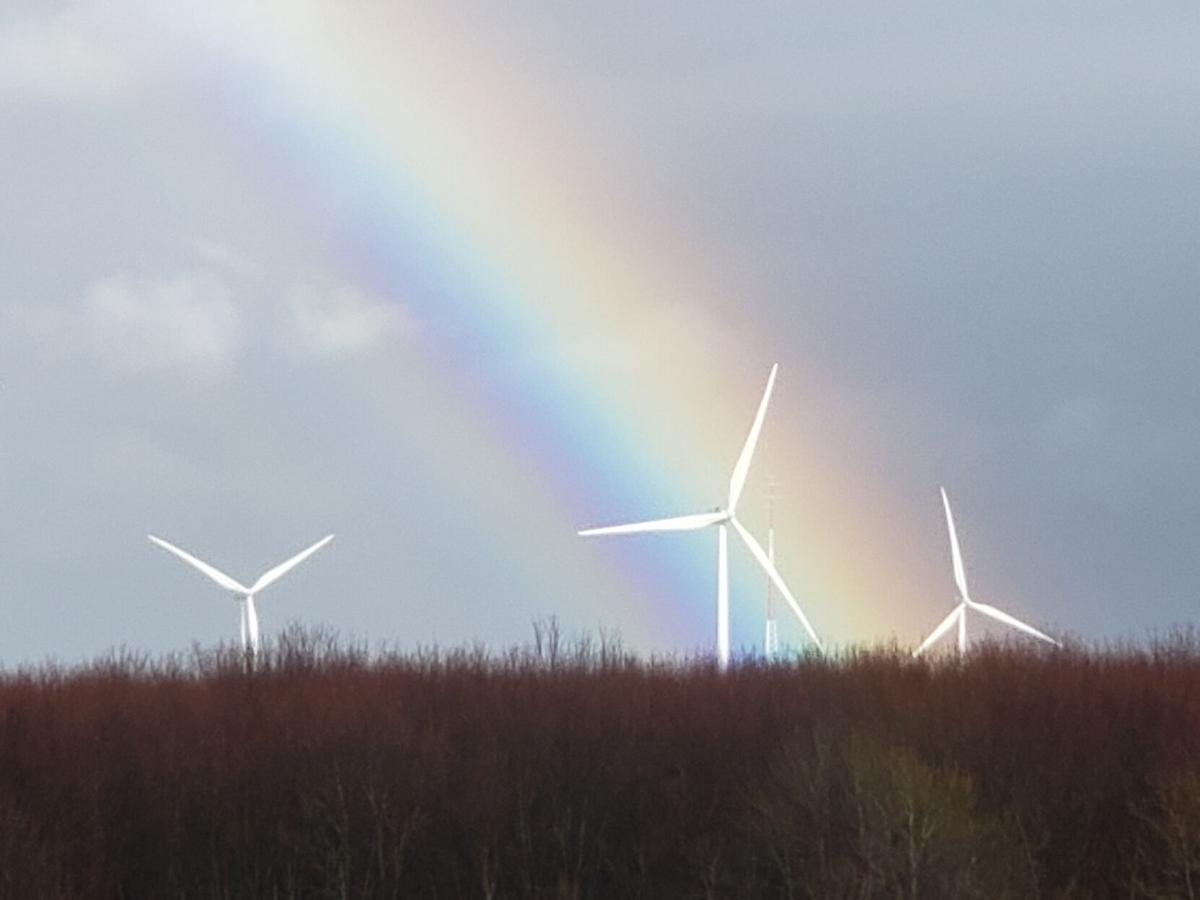 Turbines from the Copenhagen Wind Farm. The Number Three Wind Farm is being built nearby. Leslie Sheldon/Watertown Daily Times

Construction began on the Number Three Wind Farm in the towns of Harrisburg and Lowville and the substation in the town of Lowville over the summer. Provided photo

A bird’s eye view of a Number Three Wind Farm turbine foundation being constructed during the fall months in the town of Harrisburg. Provided photo

Turbines from the Copenhagen Wind Farm. The Number Three Wind Farm is being built nearby. Leslie Sheldon/Watertown Daily Times

LOWVILLE — With massive turbine bases in the ground and construction closed for the winter season, Invenergy’s Number Three Wind project will be the next large scale renewable energy effort in Lewis County to add power to the grid after its completion later this year after seven years of work.

The 105.8-megawatt project, which consists of 27 turbines in the town of Harrisburg and a point of interconnection switchyard in the town of Lowville on Route 812, is expected to create 275,000 megawatt-hours of electricity, sufficient to provide power for about 40,000 homes, according to the Chicago-based company.

Timing with these multi-faceted projects is everything, according to Number Three’s project manager Marguerite Wells.

Tree cutting for the project began in March, catching the end of the state’s window for doing so from mid-November to the end of March when bats are not roosting, and turbines had to be ordered to complete construction financing.

“There are schedules that the project has to keep. For example in this case, we know that the turbines are going to start getting delivered next May. We have no latitude in that schedule, that’s when the turbine manufacturer is going to ship them. So we know, backing up from there, that we have to have the foundations poured the year prior because foundations have to cure for 30 days and given the short construction window in the north country … we can’t expect to be pouring foundations in March,” Ms. Wells said. “So, we really had to get all of that work done in July and August, September, when it’s perfectly reasonable to do work and just have it ready and waiting for when the turbines show up the following year.”

Over the summer, the turbine and substation foundations were poured, gravel access roads were constructed and targeted electrical work was completed. By December, financing for project construction was in place.

“It took investors months and months of that (verification and vetting) process, called due diligence, to do the financing because that’s just how long it takes,” Ms. Wells said. “But there wasn’t really any question that we would get the money. We have a bunch of different finance parties that we work with on all of our deals and we work with the same ones every time. It’s more of a question of which ones like this project the best and want to do the deal.”

Although renewable energy projects have become more common in the north country, public concerns are still being raised about who the energy is for and whether renewable sources are any more “green” or helpful in combating climate change.

WHERE DOES THE POWER GO?

The concern that north country land is being exploited to create energy that is sent to New York City can be put to rest with one fact, according to Ms. Wells: Electrons follow the path of least resistance.

“(The energy) really does go into the local grid and then just spill out the extra (into the larger grid) because the local grid has to get supplied from somewhere, and just the way that electrons work, they follow the path of least resistance,” Ms. Wells said. “An electron that’s getting generated at Maple Ridge (Wind Farm) right now, it’s getting plugged into the grid (in the town of Watson) and the nearest light bulb that turns on is going to suck it back out of the grid.”

There is no line capable of grabbing power created in the north country to dump exclusively into the New York City grid, for example, but the more renewable energy fed into the grid, the less carbon-producing non-renewable energy needs to be produced, she said.

Even in the cases where wind projects have “sold” the power they produce to a specific corporation or state government, there’s no way to “send” the electrons created by wind or solar in the north country directly to somewhere else. That’s where energy credits come into play.

When government entities or corporations buy energy credits from a distant source, they “acknowledge those electrons will never really get (t)here but the grid is one big melting pot and so it doesn’t actually matter,” Ms. Wells said. But by paying for the renewable energy credits, those credits are removed from the green energy commodity market so they can’t be sold to anyone else.

Until relatively recently, wind turbine blades being taken out of commission, like other large fiberglass items — boats, for example — had to be buried because the resins in fiberglass made recycling impossible. Now, however, recycling is increasingly an option that will eventually become crucial in the north country, especially Lewis County, where there will be a total of 331 turbines with 993 massive fiberglass blades by the time all approved projects are built.

Ms. Wells had her first experience recycling a turbine blade last year using the nearest recycler she could find, in Knoxville, Tenn. She had a defunct blade from one of Invenergy’s other projects in New York state cut in half to be trucked to the facility.

“I would expect that the number of recycling facilities will expand in the country as projects start to get repowered and there are blades, there are enough supplies, to have it make sense to have a recycler closer,” she said.

Maple Ridge is one of the oldest wind farms in New York and remains the largest with 195 turbines.

“All of the turbines are less than 20 years old and the equipment quality has been just fine … The blades that are spinning are more or less the blades the (Maple Ridge owners) put on there,” she said, adding that within the next 10 years, the blades are likely to change when the owners may need to “repower” the system by putting up newer, more efficient turbines.

With a total of 585 turbine blades in the system, Ms. Wells said “that could be a big recycling opportunity for somebody.”

“That’s a big amount of material and enough trucking that it could be an incentive for somebody local to make that a business, too, especially with each blade being cut in half,” she said.

Generally, blades get ground into pellets by recycling companies and in turn are used as aggregate in cement, road surfacing material or in composite materials. Research is underway to make those pellets usable in the foundations of other turbines.

There is also a worldwide resale market for used turbines in good condition that delays the need for recycling or using energy to produce more turbines.

THE CARBON FOOTPRINT OF RENEWABLES

Calculating the full environmental impact of any good or service, including wind or solar energy plants, is common practice but complicated.

A “life cycle analysis” considers greenhouse gas emissions, energy and fuel use and water consumption for the manufacturing of equipment, project construction and how the equipment and materials are decommissioned, whether reused, buried or recycled, along the different links in the supply chain.

“Embodied energy” is the measurement of the total of all the energy required to produce a good or service, as if the energy is embodied in the thing it comes together to produce.

“The question becomes how far back on the food chain do you go? Do you not only look from iron mine to finished steel product? Do you look at the embodied energy of the machinery that pulls the steel out of the ground and the embodied energy of the steel mill itself, or do you say that (the mill) was already built anyway so only look at the steel in the machinery itself?” Ms. Wells said. “That’s kind of why estimates vary.”

A 2019 life cycle analysis “from cradle to grave” of a wind system slightly smaller than Number Three included 25,000 components — about 99.95% of the total “mass of materials” for the turbines and 99.99% for the entire wind farm, or system.

The analysis of the system — a 100-megawatt project with 20 Vestas V150 turbines — was commissioned by Vestas Wind Denmark and independently reviewed by Dr. Matthias Finkbeiner, the chair of sustainable engineering at the Technical University of Berlin.

The analysis found that the energy required to manufacture, operate, service and dispose of the wind system, its “life cycle,” will be offset by the clean energy it will produce under “low wind conditions” in 7.6 months of operation.

During the 20-year life of that energy plant, it will produce 31 times the energy it consumed over its life cycle.

Number Three was awarded the Certificate of Environmental Compatibility and Public Need approving the project through the state’s Article 10 process in November 2019.

So does my electric bill in Lewis County go down because of the wind farms? Or my school taxes?