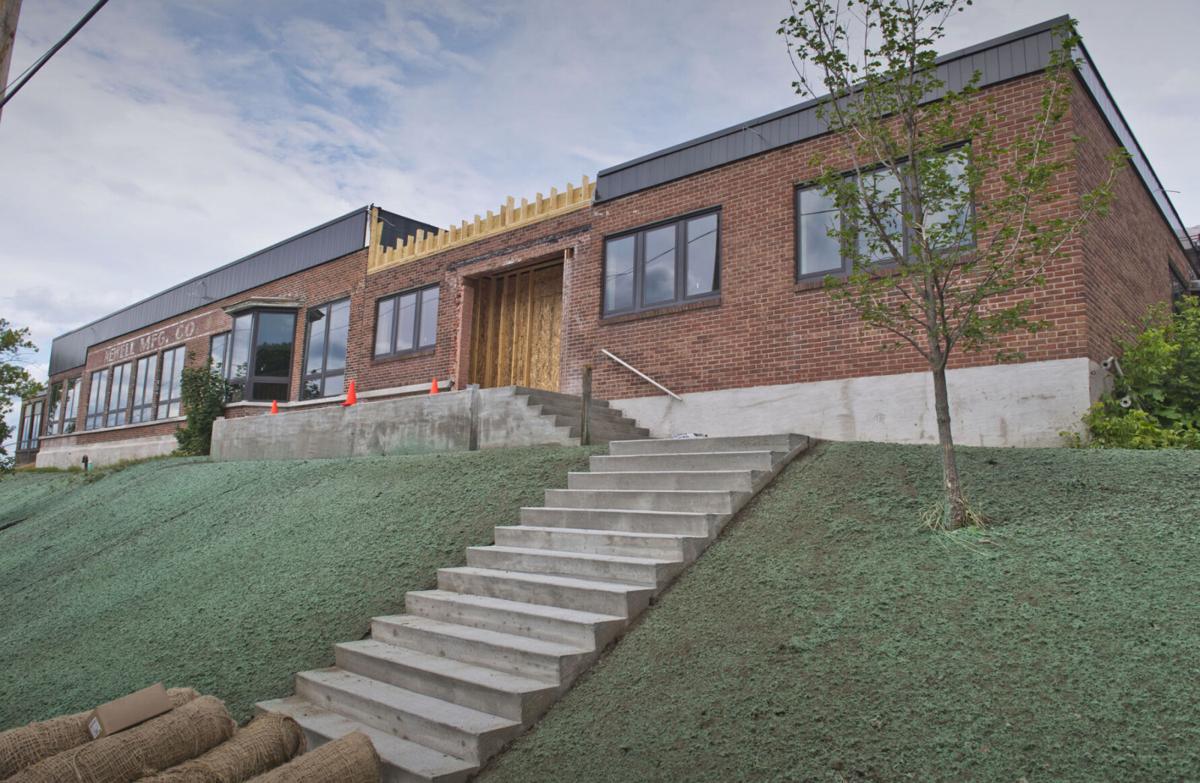 The outside of the former Newell building, 100 Paterson St., is receiving a facelift with more improvements and up grades to come. Christopher Lenney/The Journal 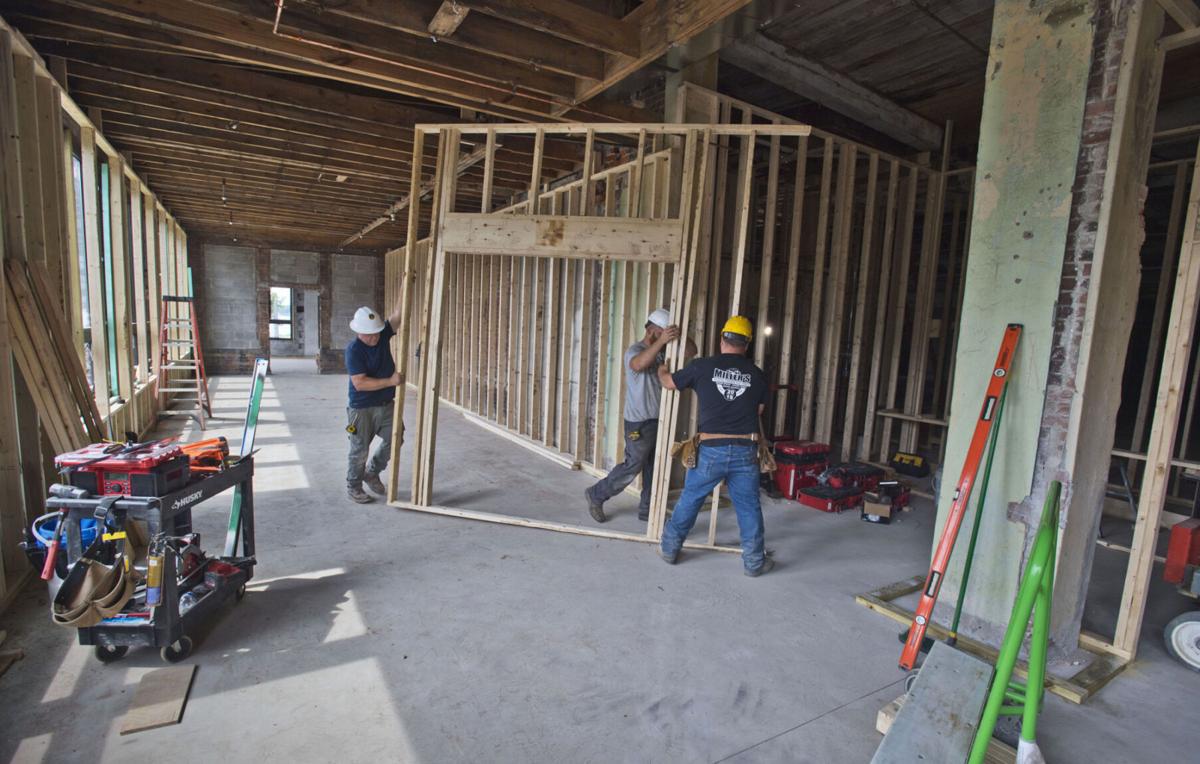 Workers from Doyle Builders install a section of stud wall frame at the former Newell building in Ogdensburg on July 1. Christopher Lenney/The Journal 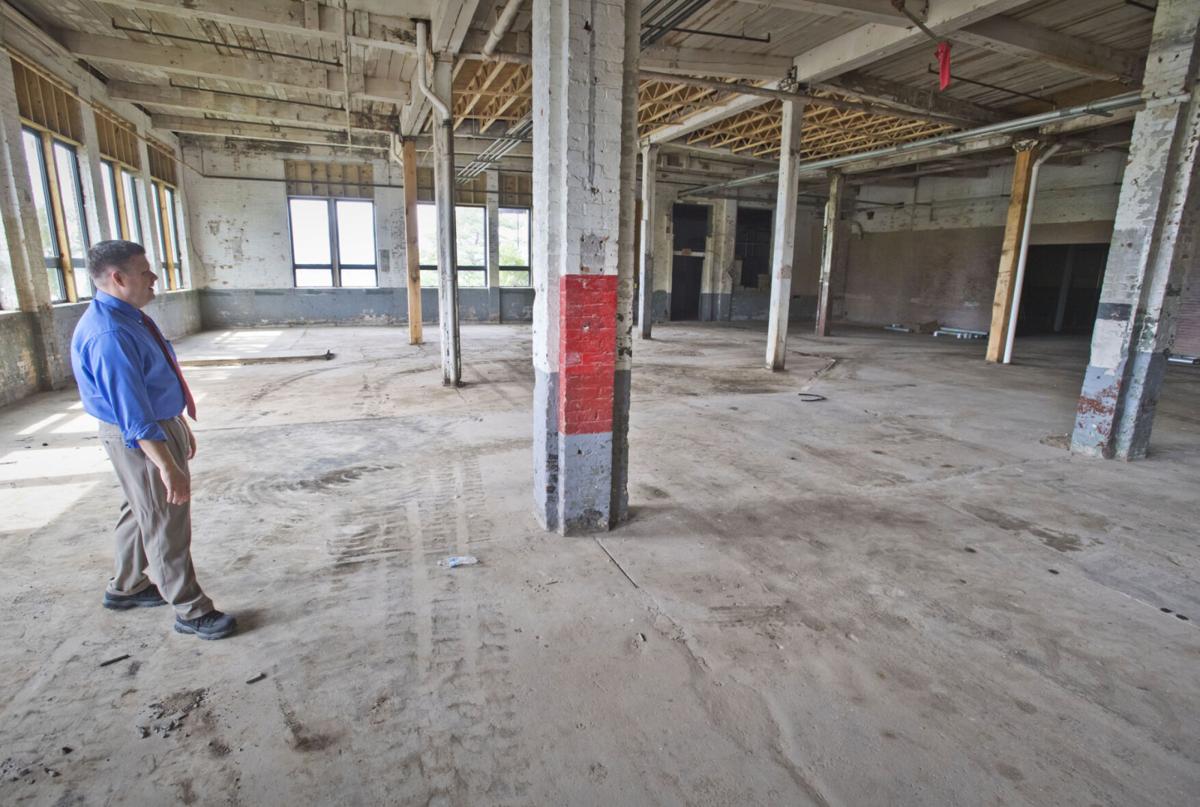 The outside of the former Newell building, 100 Paterson St., is receiving a facelift with more improvements and up grades to come. Christopher Lenney/The Journal

Workers from Doyle Builders install a section of stud wall frame at the former Newell building in Ogdensburg on July 1. Christopher Lenney/The Journal

OGDENSBURG — On the verge of deteriorating beyond repair, the former Newell manufacturing plant has been given new life as a rehabilitation project continues to unfold at this historic building.

The City of Ogdensburg, in partnership with the St. Lawrence County Industrial Development Agency, have completed a $1.6 million cleanup and exterior rehabilitation of the 70,000 square foot building, located at 100 Paterson St.

The Newell manufacturing plant opened in 1902 after being purchased by Ogdensburg businessman Edgar A. Newell. Prior to the manufacturing plant closing in June of 2003, the company made picture hangers, screw eyes and screw hooks and performed all of the packaging in-house.

At its peak, Newell Bulldog, also called Newell Hardware, had 350 employees at the city’s manufacturing plant following the purchase of company E.H. Tate out of Boston, Mass., in 1969.

Patrick Kelly, chief executive officer of the St. Lawrence County IDA, said working with the city allowed the building, which had fallen to the city through tax foreclosure, to be rehabbed instead of falling further into disrepair and risk being demolished.

“This project enables us to stop the deterioration of a signature building in heart of the city, while repositioning it as an asset for economic development,” said Kelly, “The building, sitting empty, deteriorating, was providing no economic value to anybody.” Kelly added that they knew it was going to take resources, funding and patience to achieve their goal of “full-time permanent employment, tenants.”

“The sooner we can get activity back in here, the better off everybody is,” Kelly said.

While under ownership of the city, the partnership with the IDA allowed the first phase of the project to be completed thanks to grant funding through a Restore NY grant and a Brownfield Restoration grant through National Grid.

Kelly said portions of the roof were replaced, asbestos was removed, new facade work completed, new windows were installed along the front of the building and the envelope of the building was sealed.

Earlier this year, the IDA purchased the property from the city for $1 and the IDA has moved to the second phase.

On a walk-through of the building with The Journal, Kelly said that all new electric systems and LED lighting have been installed and natural gas and water hook-ups are being reconnected. In the front of the building, along Paterson Street, crews from Doyle Builders, Ogdensburg, are busy creating 4,000 square feet of office space.

“They way they were designed and built will offer multiple potential configurations for future tenants,” said Kelly. When tenants do move in, they will be able to design the office space as they see fit, he added.

A central corridor will connect the office space to four new bathrooms and well as to open space in the main portion of the building for storage, break rooms or other uses.

This open space, called the “1912” space for when it was originally built, has 12,000 square feet for a variety of uses with original brick work that will be painted and coated, according to Kelly.

Walking back from the “1912” section is one of the newer add-ons to the building. The “1992” section is a portion of the building that can have someone move in tomorrow, according to Kelly.

“It’s 19,000 square feet of essential space that is ready to go,” said Kelly, “This is pretty much turnkey at this point.”

Kelly said that the second phase of the project is expected to be completed by fall, meaning that tenants would be then able to move in. In fact, Kelly said that he has already been contacted by interested parties.

“Essentially, once this phase of the project is complete, we will have a 70,000 square foot location for new business development or company expansion opportunities. Putting the property back into productive use fits with our goals of getting people working and redeveloping the tax base in the county,” said Kelly.

James E. Reagen, a member of the St. Lawrence County Legislature and a member of the IDA board said that redeveloping the building overlooking the Port of Ogdensburg’s waterfront is critically important to the IDA’s long-term strategy to help bring new businesses, new jobs and economic growth back to Ogdensburg.

“Saving this major industrial landmark will help us convince companies that Ogdensburg offers a great place where they can locate, grow and bring new employment opportunities to our community,” said Reagan, “I want to thank my fellow IDA board members and our talented economic development team for believing in the future of Ogdensburg and working tirelessly to bring about this important industrial rebirth in the heart of our community. I also want to thank City Planner Andrea Smith, IDA CEO Patrick Kelly and IDA staff member John Pinkerton for making this happen.”

“It is a unique opportunity to find a building both with so much history and so much potential. We are fortunate in that our partners and supporters in the project, the city, Empire State Development, the Development Authority of the North Country, National Grid, and the Northern Border Regional Commission, share our view,” said Kelly.