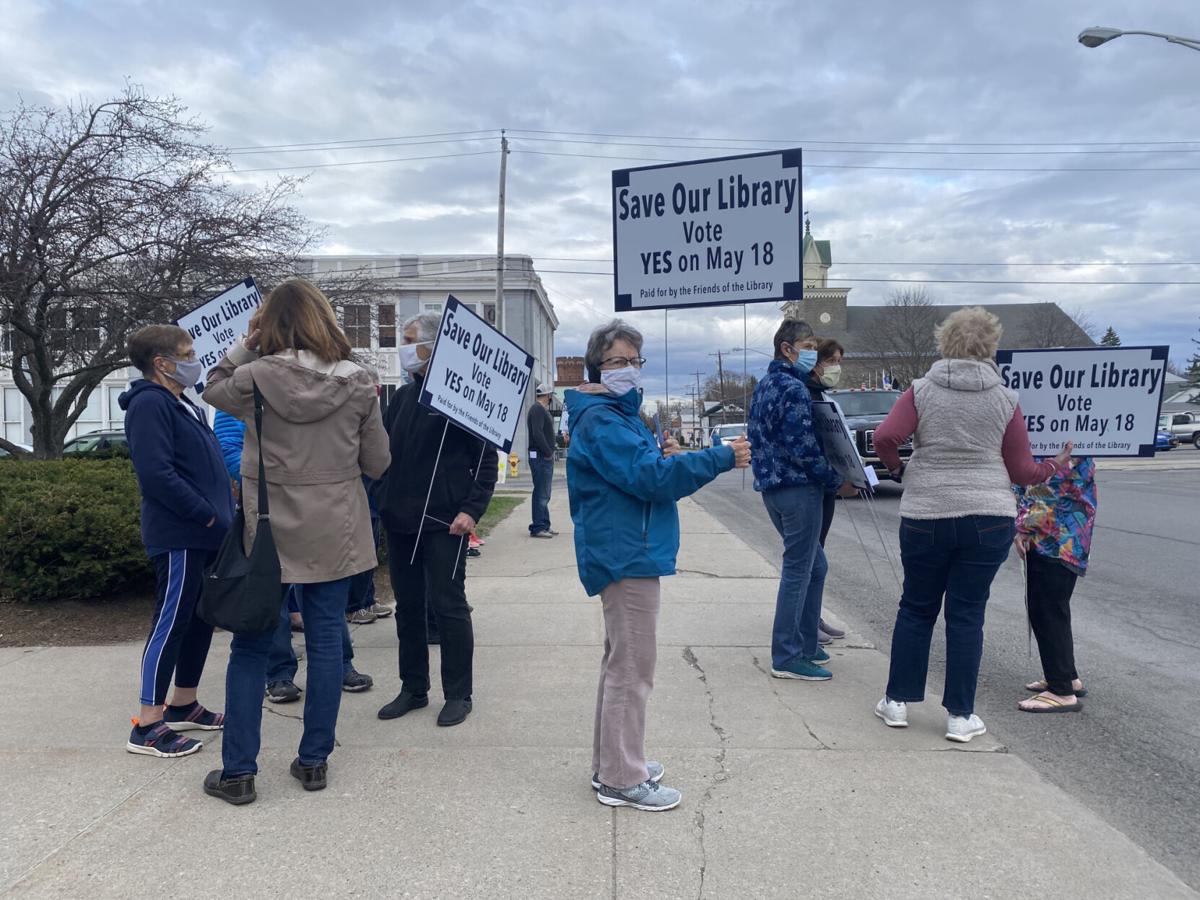 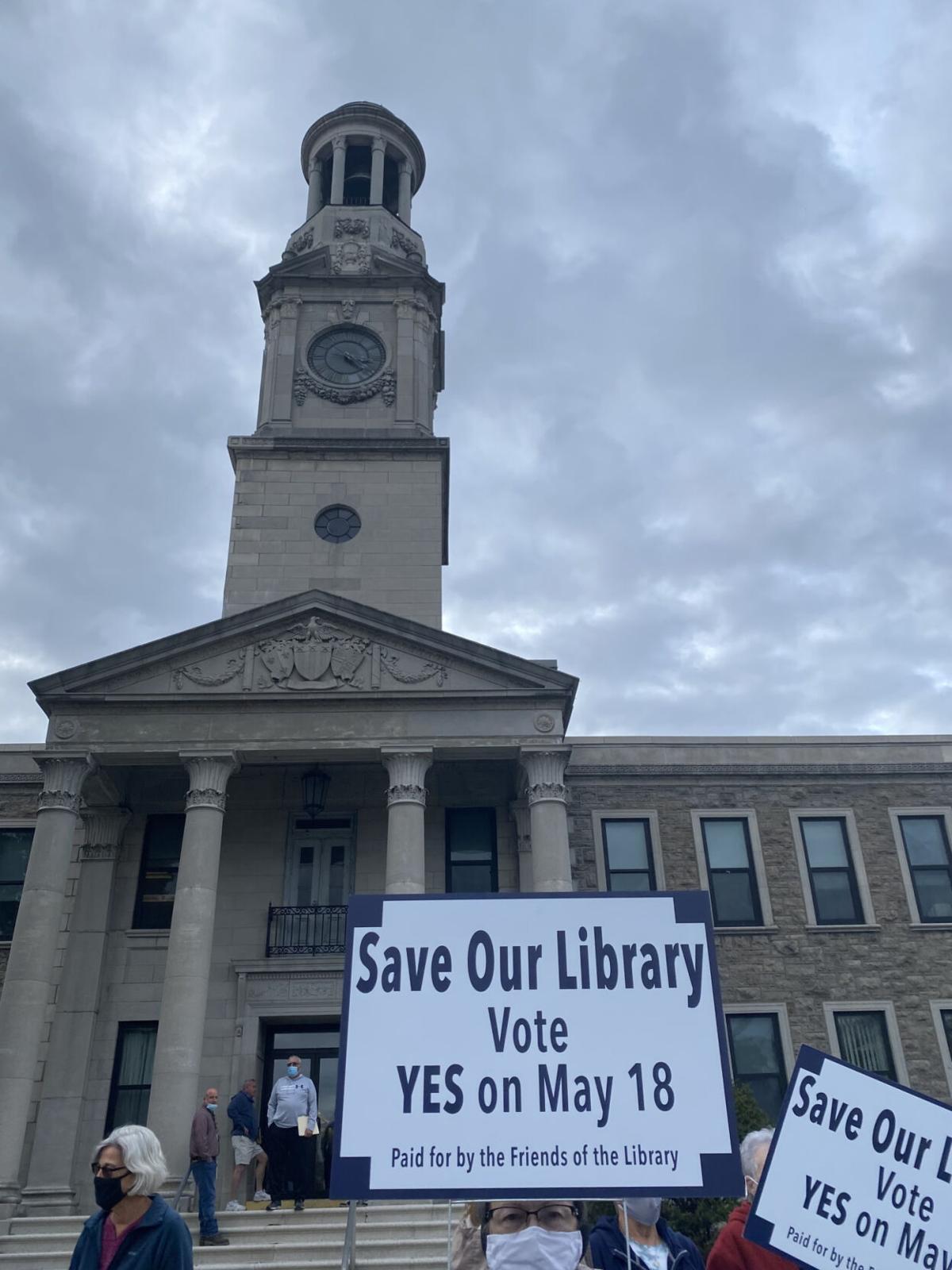 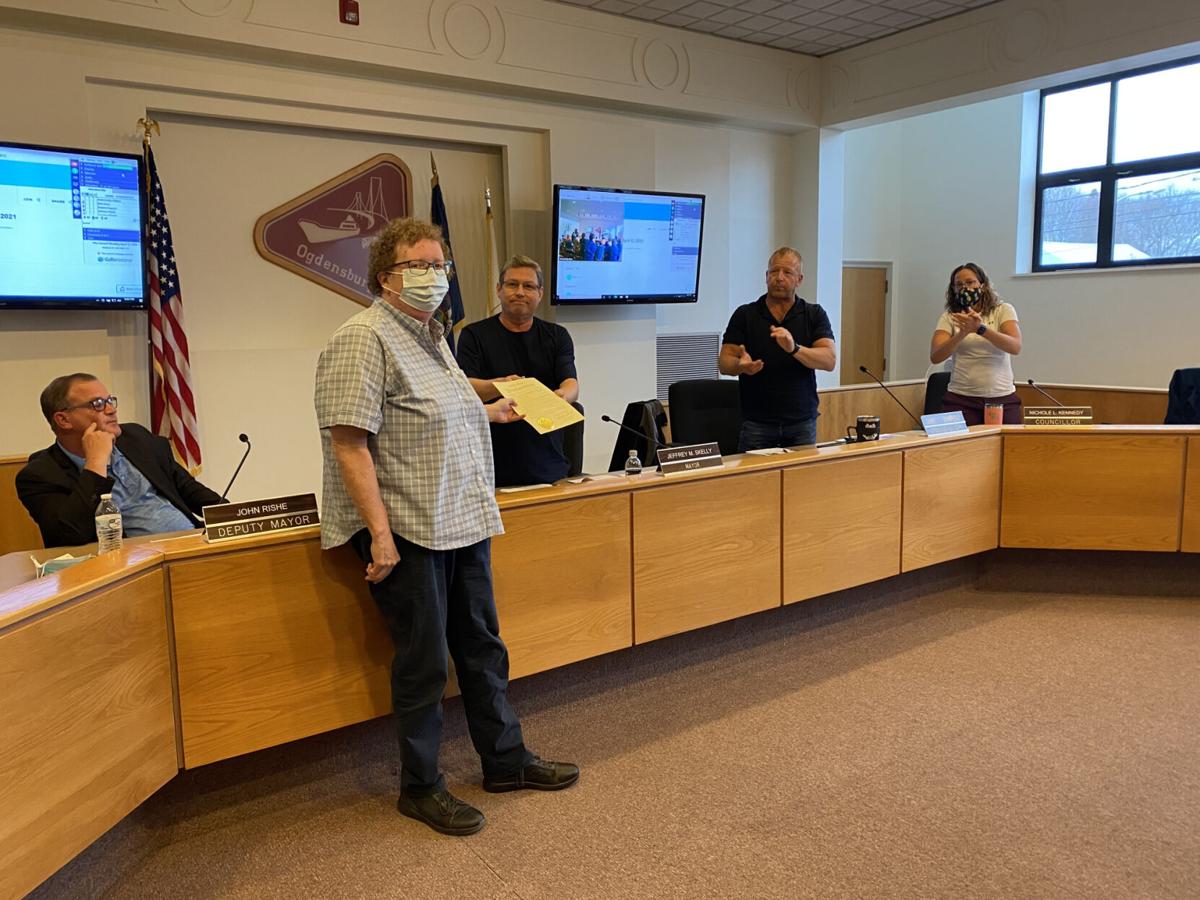 OGDENSBURG — Library users, taxpayers, constituents — one and the same — rallied outside City Hall on Monday night.

The group of about 30 people gathered ahead of City Council’s first of two April meetings, asking passing voters and motorists to support a May school district referendum to fund the Ogdensburg Public Library.

The library Board of Trustees is hoping for $225,000 in funding from property taxpayers in the district to boost the steady decline in city contributions over the last six years.

The phased decline was designed to increase self-sufficiency of both the library and the Frederic Remington Art Museum, eventually cutting the city contribution altogether, City Manager Stephen P. Jellie said. Councilor Michael B. Powers contended the plan was to increase the fund balance and start to slow down contributions, “not to completely phase out, unless necessary.”

Library Executive Director Penny J. Kerfien said the city relayed it would not be funding the library after this year. The city budget notes the 2021 allotment “phases out direct city support” for both the library and the Remington. For the last three years, taxpayers have covered roughly $125,000, and the increase of $225,000 would supplement the absence of city funding.

Signs reading “Save Our Library” were raised by the Friends of the Ogdensburg Public Library, a group of dues-paying community members who champion library programming and resources.

Standing outside with the Friends, Ms. Kerfien described the support as “wonderful.”

The Ogdensburg hub, like public libraries around the country, is a haven for books and audio materials, historical research, Wi-Fi and computer use.

Prior to the COVID-19 pandemic, community jigsaw puzzles were regularly assembled at the library by students, young children and older adults — complete strangers.

At the top of the meeting, Mayor Jeffrey M. Skelly read a resolution proclaiming April 4 to 10 — last week — as National Library Week.

“Libraries and librarians look beyond their traditional roles and provide transformative opportunities for education, employment, entrepreneurship, empowerment and engagement, as well (as) new services that connect closely with patrons’ needs,” the resolution reads in part.

Libraries, according to the mayor’s resolution, “are pioneers supporting democracy and effecting social change.” The resolution concludes with a call for the public to explore libraries: “Because of you and our library leaders, libraries transform.”

Following approval of the evening’s consent agenda and discussion of old business, Mr. Jellie proposed an appropriation of $15,000 to honor an Ogdensburg Command Performance request for additional funding this year. That $15,000, he said, would come from the unused funds previously designated for a city manager’s assistant, a position that remains unfilled.

Mr. Powers suggested that money be divided between the OCP and other entities receiving city funding this year, including the library.

Discussion then evolved into a back-and-forth involving Mr. Jellie, Mr. Skelly, councilors and members of the public, a now characteristic meeting segment since last year.

With already established regulations for collecting library taxes through school districts, the library board is set up to seek funding outside city government.

“And if they get their money, they get their money,” Mr. Jellie said. “If it doesn’t happen, I do think one of the things Council has to take into consideration, strongly, is that if the community does speak, and they don’t approve it, then you all represent the people here. If the people speak in one direction, how far in another direction do we go? I think the library has put themselves in a position to find out exactly what the community thinks.”

Mr. Skelly read from a 2020 library budget report, arguing the library’s full- and part-time staff, for wages budgeted, should have been managing the library more often.

For the personnel expenses, he said, “I believe that library should have been open days, evenings and weekends.”

Standing up from her seat in the gallery, Ms. Kerfien addressed Mr. Skelly, clarifying that the library’s full budget was not spent in 2020, and that a three-month pandemic shutdown halted library operations. Some library services resumed in a partial reopening for another three months, she said.

The mayor said his point was: “I just want to see better performance.”

Councilor Daniel E. Skamperle responded: “I think they do a fine job.”

The library has submitted three appointment recommendations to the city manager’s office to restore its full nine-member Board of Trustees. The issue was taken up under items for discussion, just before the second public comment period.

Mr. Jellie said after seeking legal advice, he determined library board appointments are absolutely the mayor’s appointments and confirmed by the City Council.

The protocol is outlined in state education law, which for city jurisdictions, states public library trustees “shall be appointed by the mayor and confirmed by the common council.”

The law also states a public library with a charter granted before April 30, 1921, should appoint trustees through the method outlined by the charter. The Ogdensburg library has historically recommended trustees, who have been approved by the sitting mayor.

In a library publication from 1974, compiled by library staff at the time, the long history of the city’s public library is detailed. The library — housed in different buildings, setting varied relationships with the city school district, offering updated services and adjusting its staffing — has existed in some capacity since 1830, or even as early as 1828, according to the history publication.

A state charter was approved in 1893, and trustees were appointed by Mayor Edgar A. Newell the year before. It’s unclear from the publication whether the charter specified a method of trustee appointment.

A few community members spoke during the second public comment period, asking the mayor to seriously consider the library board’s recommendations — all of whom are involved in the library’s work.

Mr. Skelly on Sunday afternoon posted to his Facebook page about the planned rally, describing it as a “hate rally.”

After greeting Ogdensburg in all capital letters, he wrote: “Cindy Layng and her hater group are now using the Ogdensburg Library as cover for yet another hate rally.”

The post continues with Mr. Skelly’s assumption that the City Council meeting would involve “heckling and rude conduct.”

Cyndi M. Layng, her first name misspelled by the mayor, has been vocal nearly every month of the last year, advocating for the city fire department, against workplace violence at City Hall and leading an effort to request a vote of confidence in the city manager.

A request for the “immediate termination” of Mr. Jellie, submitted in writing with 139 signatures to the city clerk’s office, was presented by Margaret A. Haggerty during public comment, though Mr. Skelly refused to allow a reading of the letter during the meeting.

As the rally quieted and councilors took their seats inside, Ms. Kerfien stood outside City Hall, looking at the demonstrators.

“This is real community spirit,” city resident Marsha E. Hough said, adding that library funding is an issue in municipalities everywhere. “We’re not unique in this. We’re just trying to save our little corner of the world.”

The library referendum, which is part of the school district election but separate from the district’s budget vote, is scheduled for May 18.

They still have libraries? I thought they went the way of bookstores. Come on people, you can put an entire library on an iPad. Quit wasting taxpayers money on outdated libraries.

So the Mayor wants better performance? I think that's what all City taxpayer's expect of the Mayor, Council and the Unqualified City Manager. But we all know that won't happen; so that's why we are moving to get the shameful majority and UCM out of power for their continued violations and unprofessionalism. Their actions and lies speak volumes about their character. Ogdensburg deserves better!