OGDENSBURG — The union that represents Ogdensburg’s police officers, and a police officer who was at City Hall on Monday night, dispute Mayor Jeffery M. Skelly’s account about his interactions with police officers this week.

A memo, signed by Jose L. Manjarrez, a lawyer with the United Public Service Employees Union, said that the union had no choice but to release “the facts as the participating Officers understand them.”

“Skelly pursued and confronted two Police Officers as they were on duty and moving about the City,” the memo reads. “In an aggressive and intimidating manner, Skelly asked both Officers if one of them had videotaped him leaving a nearby establishment.”

The memo pointed out that the City Charter prohibits direct dealing with personnel by council members and said that both officers felt a “reasonable level of fear” and both filed workplace violence complaints.

According to a police report, officers were called to City Hall at 7:13 p.m. Monday, shortly after a regular meeting of the Ogdensburg City Council was postponed by City Clerk Cathy Jock.

Mr. LaFlair is on the police report as being one of the responding officers.

Mr. Skelly said Wednesday that he was at City Hall after the meeting, which was held remotely, because he wanted to have Ms. Jock schedule a meeting for the next day. He said the police were already there when he arrived.

“I was the officer who was dispatched to city hall after receiving a complaint of an unknown disturbance,” Mr. LaFlair wrote in his Facebook post. “As I arrived on scene (ogdensburg city hall), I did see the mayors red truck as well as two other vehicles parked on caroline street. I used my key fob and entered the building from the caroline street entrance. I then could hear pounding on the main entrance door. I looked to my left and observed Jeffery “Mike” Skelly the mayor, at those main entrance doors (Ford Street side) he was pounding on the doors yelling ‘let me in!’”

Mr. LaFlair said he encountered three women in the building who were shaking and crying. One of the women, he said, was afraid to cross the hall because it would allow Mr. Skelly to see her.

“Those women then asked me to escort them home for their safety. I agreed and did just that,” he wrote.

Mr. Skelly said that he was approached by another police officer outside and then eventually Police Chief Andrew D. Kennedy.

According to the police report, four officers were at City Hall that night and the incident was over at 7:45 p.m.

“I do not fear repercussions from this post because it is the truth,” Mr. LaFlair wrote, adding that he was going to begin searching for work elsewhere.

Mr. LaFlair said he could not talk to a reporter about his post.

“I love my place of employment. Best group of guys and girls I have ever worked with!” he wrote. “I love OPD. But Councilor Fisher, Dillabough, Rishe and mayor Skelly have created a divided city where I feel threatened and no longer safe.”

Mr. LaFlair has been active on a Facebook page set up to support Ogdensburg First Responders.

Police officers said they arrived at City Hall to find Mr. Skelly arguing with Ms. Purdy who would not let him enter the building because workplace violence complaints had been filed against him.

“The timeline of the events should not be looked at in isolation but rather as a set of events that naturally place Skelly’s behavior in question,” the memo reads.

A copy of the memo was emailed to Mr. Skelly on Thursday afternoon with a request for comment. He had not replied as of the time of this report.

The memo can be read in full below: 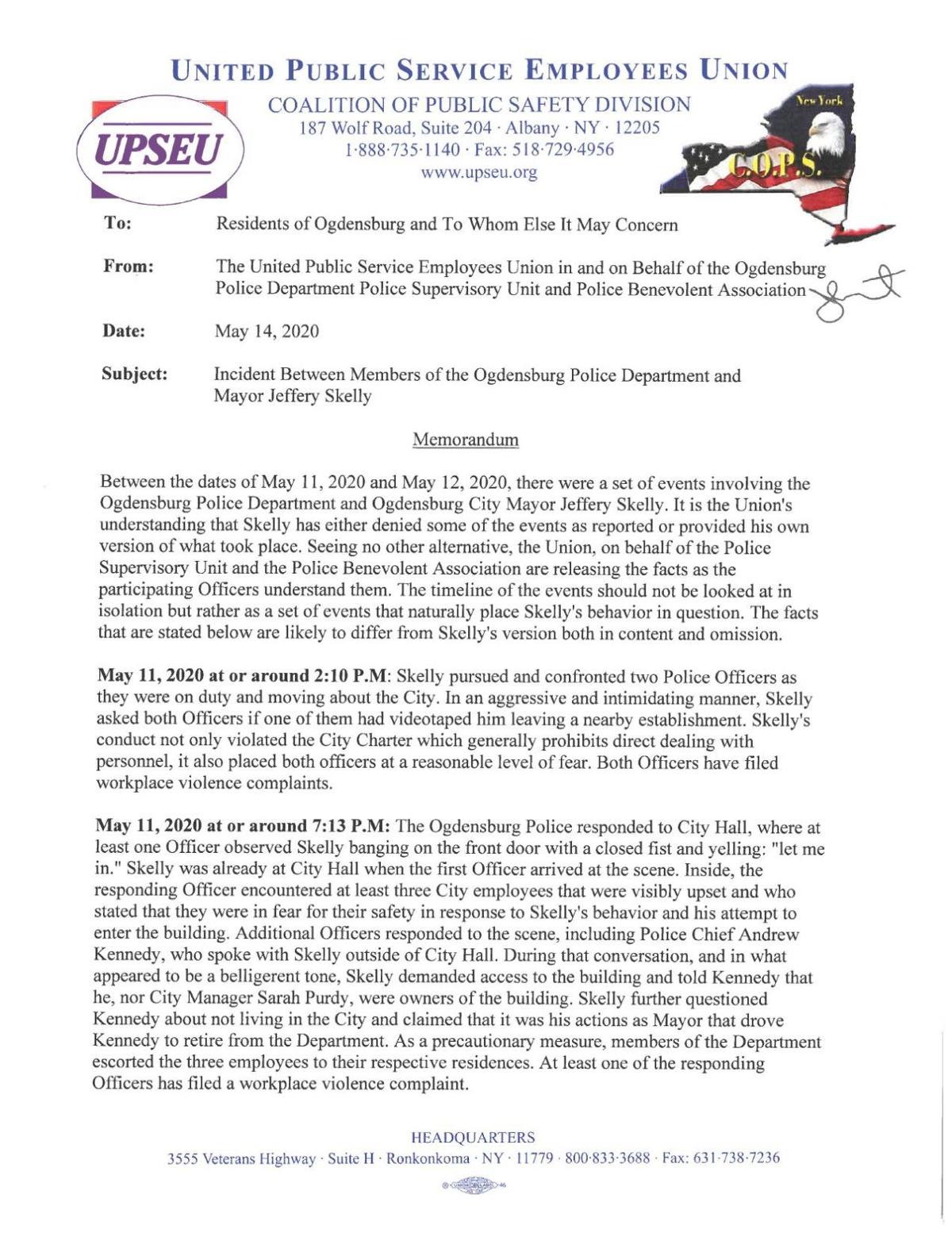 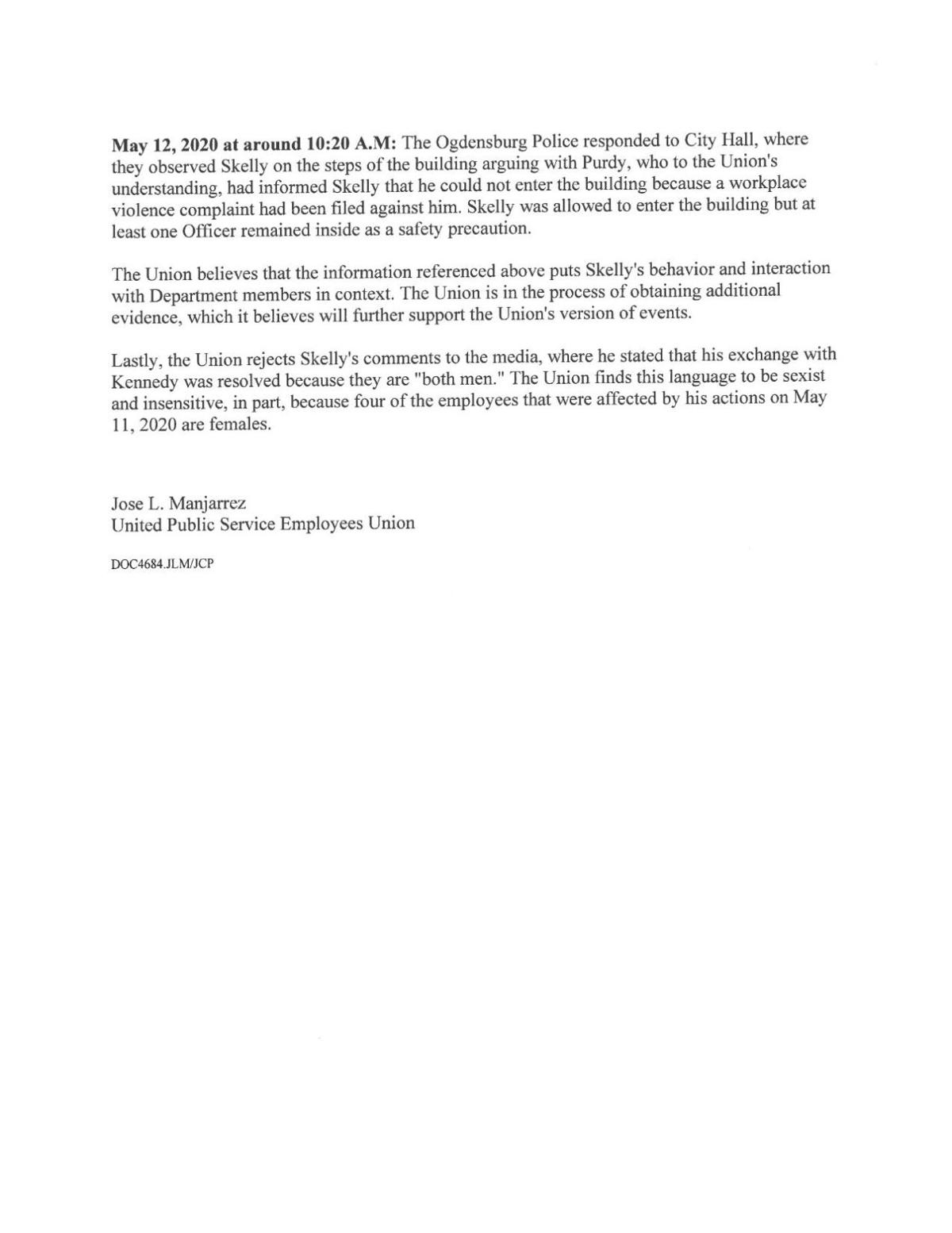 Same comment I've made numerous times.... "Nov 2019-The write-in candidate received 1,264 votes, a landslide victory over incumbent mayor, Republican Wayne Ashley, who was seeking his second four year term." Elections have consequences...and unlike the last national election, this was a landslide ... the people spoke, deal with it..

You still have to follow the law - landslide or not.

Where is he violating the law????It is all the servants who are stacking up against him the MAYOR!! Non elected people get like this? The SWAMP is exposed.

I have talked to numerous people who voted for the mayor and now see what is going on and wish that they had cast their vote in another direction. All people heard was 25% tax savings and didn't give any thought to what might happen to their city in order to obtain these out of reach goals. Elections have consequences, hopefully there is a city left when these completely incompetent people can be voted out. I have heard and seen zero support for the thing they have done and/or tried to do. People are upset

What in the world is going on there in Ogdensburg? Police officers posting what they are involved in on the job in Facebook? Really? Does anyone up there even have the faintest idea of just what is professional conduct and what is not?

These cops are civil servants. Who did the people elect? They want taxpayers monies spent wisely Not overtime in the thousands, Taxpayers sponges.

Ogdensburg is a snake pit for gang related meth labs. do you have any idea what goes into the legal executions of raids? My guess is you're clueless.

Out of control employees

Out of control mayor.

I'm wondering whether this "out of control" theme you have going on is just simple projection.

If my integrity was being attacked unjustly, rest assured I would defend myself in one form or another.

Shocking this cop can do this? The cops here are out of control.

Wait, are you saying this mayor is a lying snake in the grass? I am sure he will drop his lawsuit to save the city money as well. And pay his taxes. Maybe he could move his business into ogdensburg.

Yup you'll get all the relief you can handle as you meander thru the needle ridden streets amid all the burned out buildings. LOL

No jobs. Breeds poverty and drugs