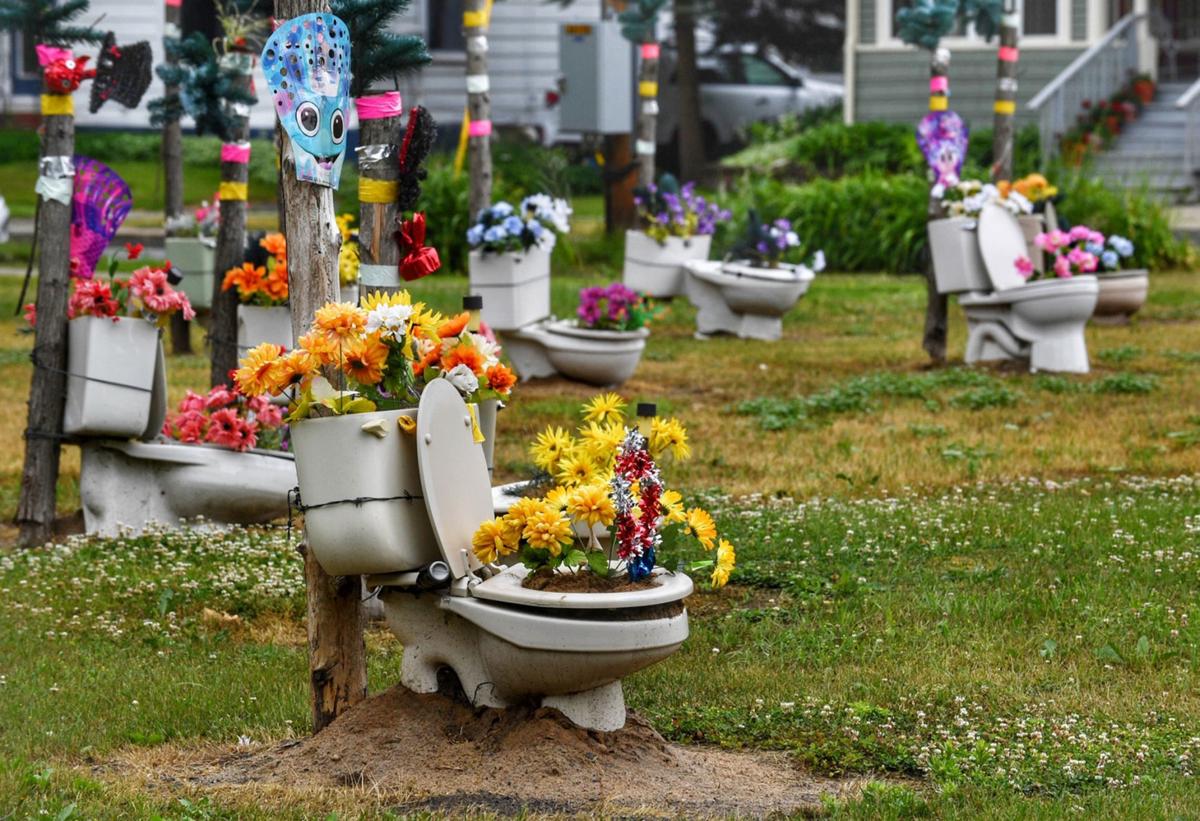 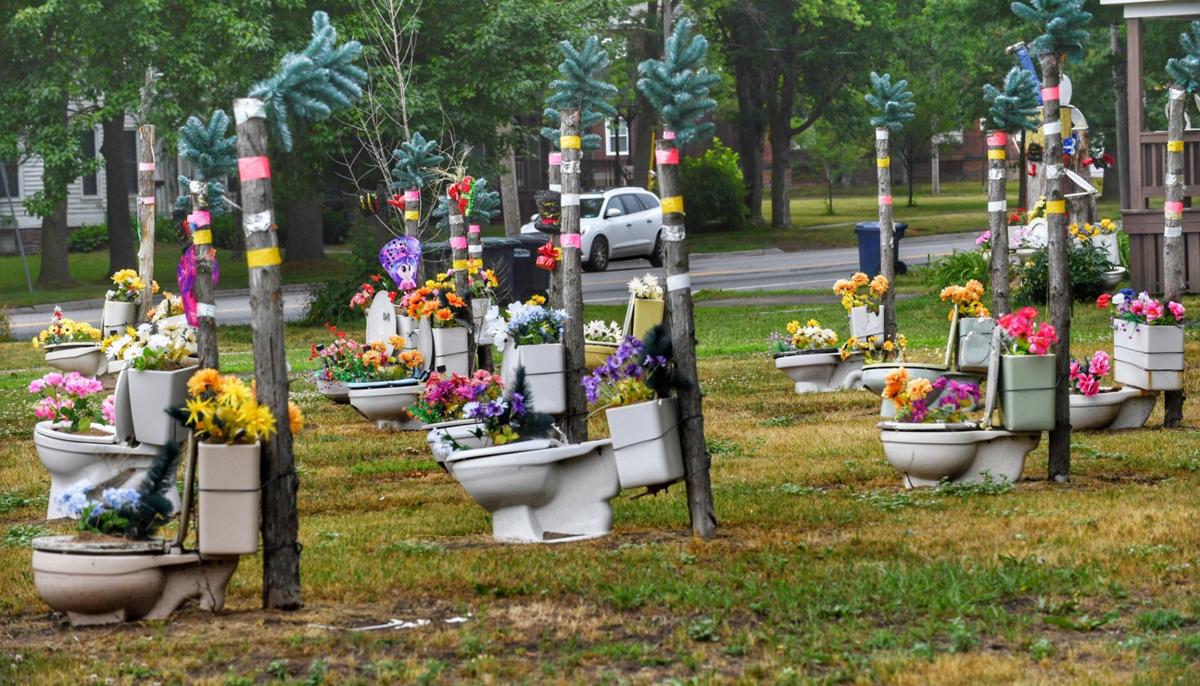 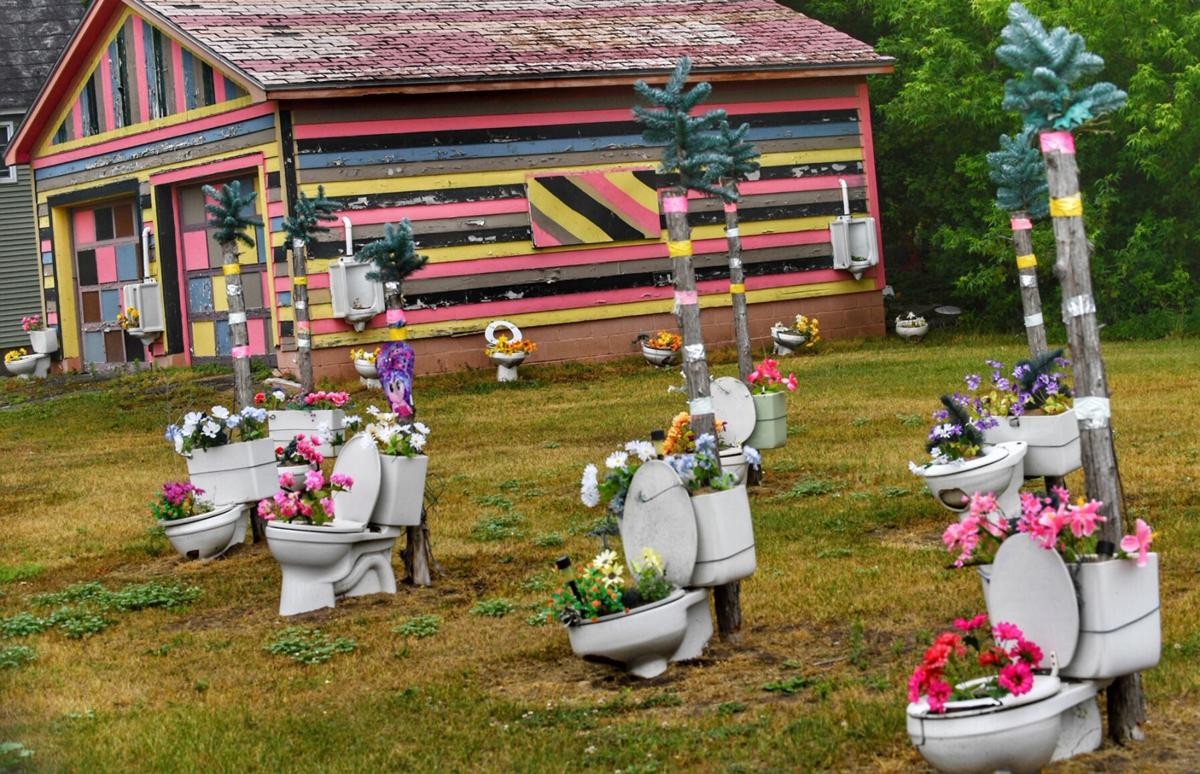 The toilet gardens on the properties of Frederick “Hank” Robar, Sr. are, once again the subject of legal action from the Potsdam Village Board of Trustees. Christopher Lenney/Watertown Daily Times 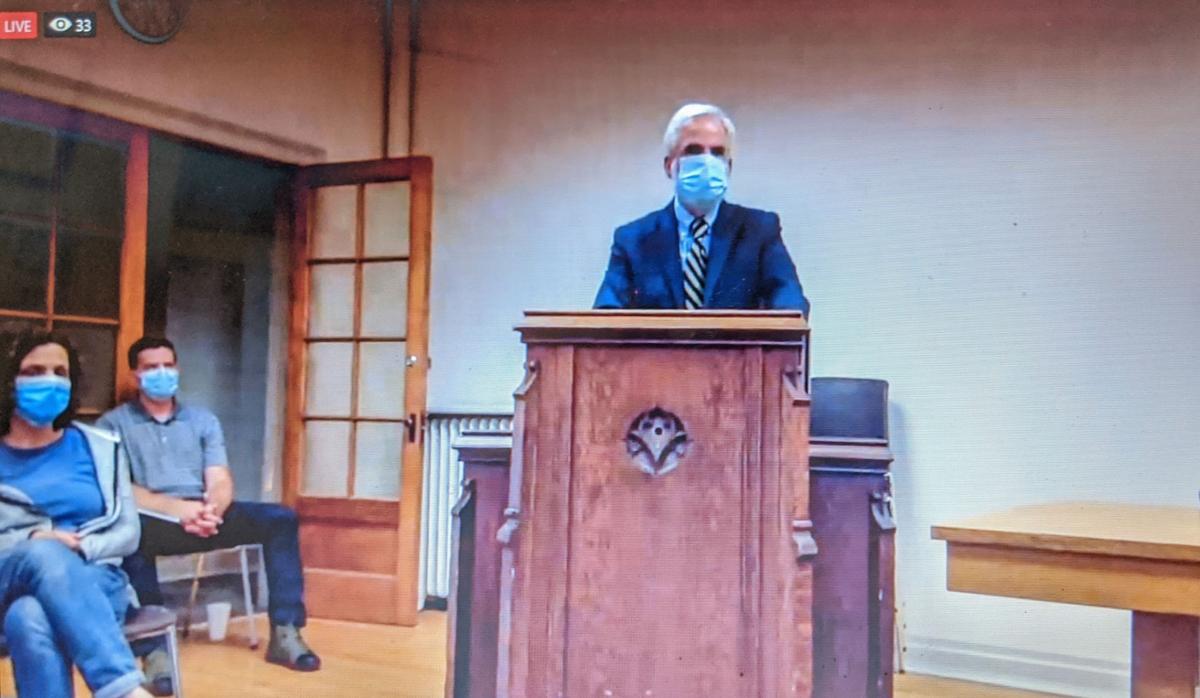 St.Lawrence Health System Chief Executive Officer David B. Acker speaks before the Potsdam Village Board of Trustees about the toilet gardens on the property of Fredrick “Hank” Robar Sr. on Monday afternoon. Facebook Live screen capture

The toilet gardens on the properties of Frederick “Hank” Robar, Sr. are, once again the subject of legal action from the Potsdam Village Board of Trustees. Christopher Lenney/Watertown Daily Times

St.Lawrence Health System Chief Executive Officer David B. Acker speaks before the Potsdam Village Board of Trustees about the toilet gardens on the property of Fredrick “Hank” Robar Sr. on Monday afternoon. Facebook Live screen capture

POTSDAM — Trustees in the village heard from the lawyer of Fredric “Hank” Robar Sr. and concerned residents about the infamous toilets gardens Mr. Robar has set up on his properties around the village.

The hearing was held at the request of Mr. Robar who had been issued notices to comply to the village’s junk storage law, passed in December of 2018.

The village has a long history of battling unsuccessfully with Mr. Robar over his toilets.

Mr. Robar popped onto the village’s radar in 2004 when he asked to get a zone change at his property on 82-84 Market St. so he could sell it to a buyer who would put in a Dunkin’ Donuts. When the village denied his request, he set up what is referred to now as a toilet garden. Since then, he and the village have butted heads twice inconclusively and unsuccessfully in the village court system.

In 2008, the village issued Mr. Robar an appearance ticket for a code violation. Mr. Robar argued that the toilet gardens are art and it’s his First Amendment right to have them. The case was dismissed because Code Enforcement Officer John F. Hill failed to bring documents to the court.

In 2010 the village tried again, but after the presiding judge resigned amid cocaine-use allegations, the case was dropped and the village decided not to pursue it.

The junk storage law, that has been enforceable since Dec. 6, 2018, says that the accumulation of junk, no matter the amount, that can be seen by people from public spaces is a violation.

She also said the law was written to include conditions that existed before its implementation.

Mr. Robar was served on June 8. On June 10, Mr. Robar requested the hearing, which is part of the ordinance.

“The following day, June 11, 2020, I observed Mr. Robar at two of his properties, fixing toilets and changing flowers that he has displayed in them,” Ms. Newby said.

Since then Ms. Newby has recorded an accumulation of more toilet on Mr. Robar’s property at 10 Pine St.

“At this time it is my recommendation that the Board of Trustees advise Mr. Robar his only option is to remove each and every toilet and bathroom fixture from these properties immediately,” she said.

Mr. Robar was represented by Mark Snider of the Snider and Smith Law firm of Massena.

“In this state and in this country we have some rules called grandfathering rules,” Mr. Snider said. “Those are more than just statutory, those are Constitutional. So, Mr. Robar is here tonight, not only because there’s an alleged violation of a statute going into effect but to protect his constitutional rights, and his statutory rights.”

Mr. Snider claimed that the law was created to punish Mr. Robar, after the fact.

“The statute itself may be fatally flawed as being vague,” Mr. Snider said. “We do our best when we draft these rules and statutes but they have to tell us in advance the conduct that is going to be forbidden — that we’re on notice of what is appropriate conduct and bad conduct before we are being punished. “

“Someone made up their mind that Mr. Robar was going to be punished for what he has done,” Mr. Snider said. “So we may be in the process of violating Mr. Robar’s right to protest, his freedom to speak freely, his freedom of expression, his idea of what is artistic whether it be your view or mine or anyone else’s.”

St. Lawrence Health System Chief Executive Officer David B. Acker said he spoke to the Board of Trustees as both a private resident of Postdam and as a representative of the hospital system.

The toilet gardens, he said, make it difficult to recruit young doctors who would want to stay and invest in the community.

The appearance of the village can be beneficial for everybody, he said.

“In my view, this is not simply about toilets; this is about a broader issue of: ‘Do we care enough about this place to enforce our codes so that we can uniformly allow those natural gifts we have of natural beauty and architectural beauty.’”

Also speaking out against the installations were a representative of Clarkson University and Sharon Williams, president of Temple Beth El, which is on Market Street across from one of the gardens.

Mayor Reinhold J. Tischler said the trustees would likely hold a special meeting in the middle of next week to issue a decision on the matter.

Mr Robar has the right Express himself in any manner , and as someone else pointed out what about the bathtub Mary shrines , allow them but not toilets? I love the fact that rather then allow a simple zoning change which would have benefited the entire area with a few jobs, taxes, and a service the village denied such and Mr Robars rebuttal is epic..the village will spin its wheels over this, spend countless time and money and still LOOSE . Mr Robar will have the last laugh ..as he should . And for that I commend him.

How did I not know about this?? Time to take my boys on a field trip to my alma mater LOLOLOL I BET THEY WISH they woulda said yes to Dunkin’ Donuts 🍩 now. I noticed bathtubs aren’t listed with the appliances that are considered junk. Would this be because bathtubs are used as shines for Mary so including them would target more than this guy in the law they allegedly made to address OTHER junk issues?

I LOVE ITTTT. As for the toilets hindering young drs from wanting to settle in Potsdam, for the record if I lived in Potsdam I would ONLY CHOOSE new drs based on what side of the toilets they are on and I’m ALL ABOUTTTTT THIS ARTISTIC PROTEST.

This made me extremely happy. They don’t call it “madstoP” fer nothing. Wes craven, elm st, and now this. Who WOULDN’T want to settle there? Besides: didn’t they finally agree to let Walmart infiltrate and set up a superstore? So they should already be accustomed to large toilet gardens.....

If these toilets can collect and hold water, doesn't that make it a health issue as far and breeding mosquitoes and such?

How does this relate to laws requiring us to upgrade our sidewalks?

And in a liberal sophisticated college town, real cosmopolitan....