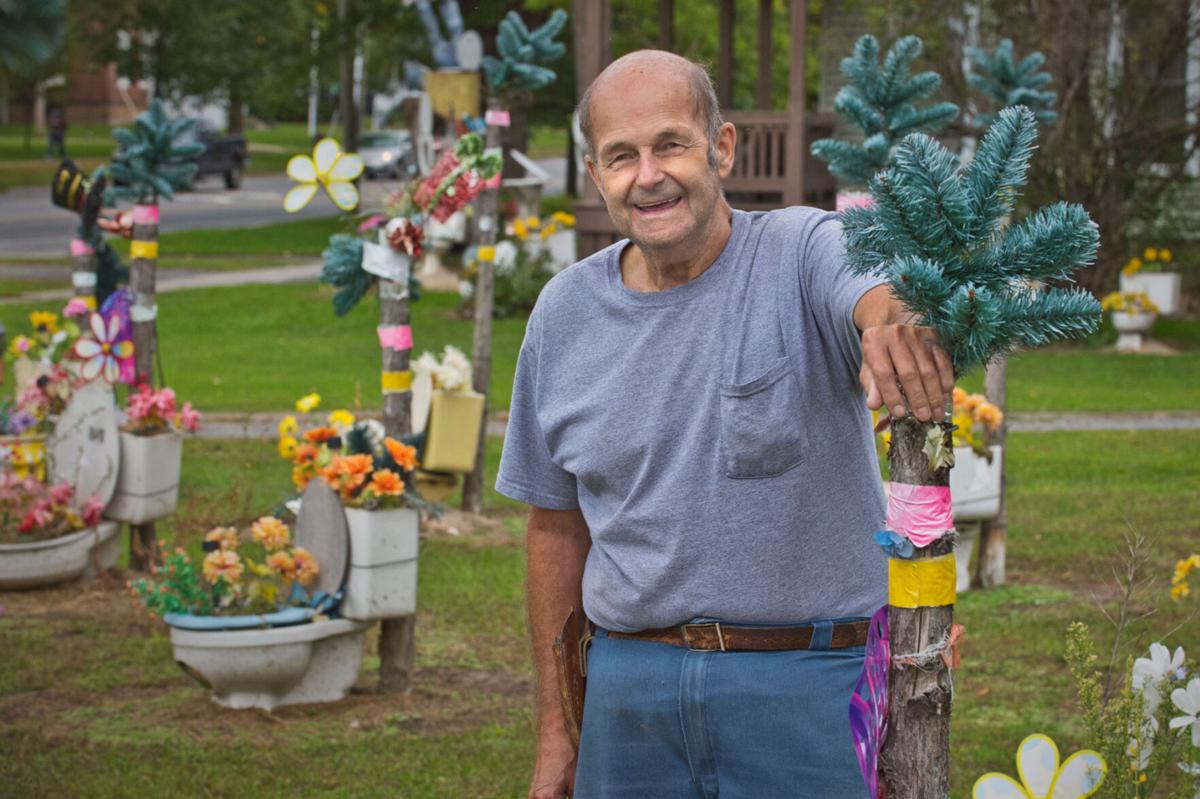 Frederick “Hank” Robar stands in one of his toilet gardens on the corner of Market and Pleasant streets in Potsdam last week. Christopher Lenney/Watertown Daily Times 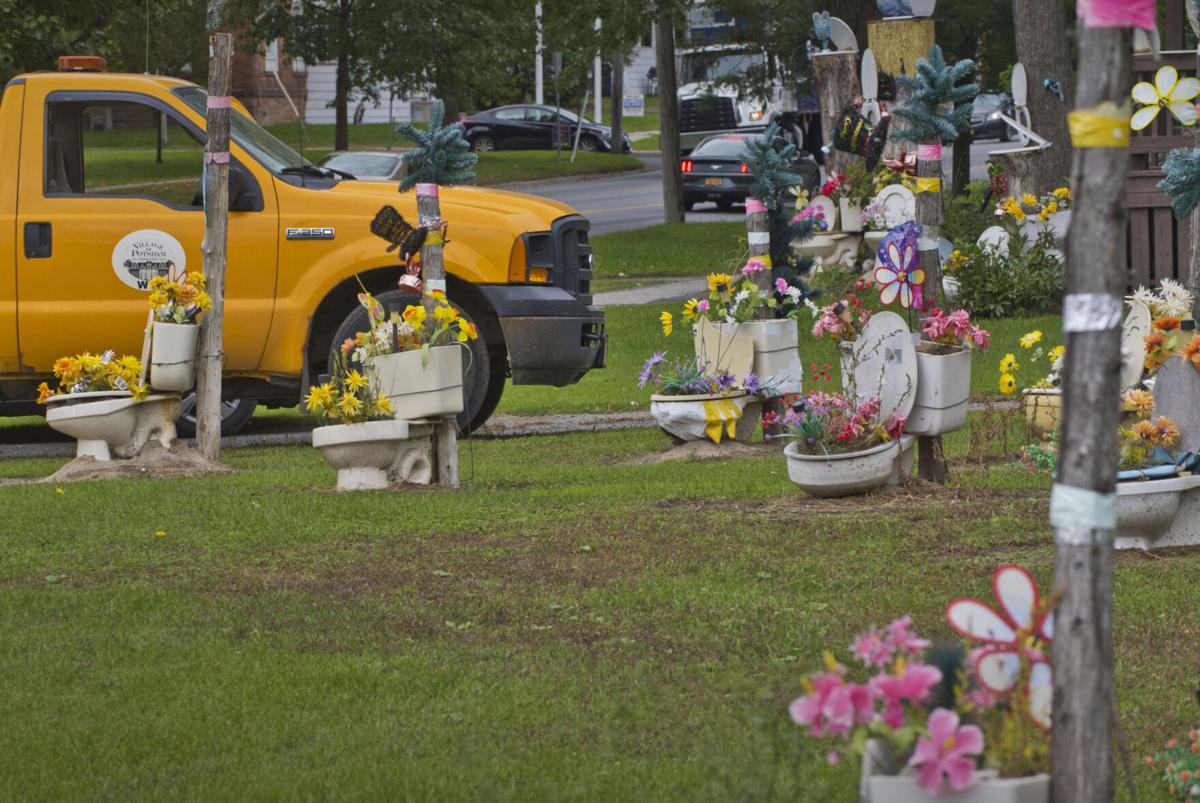 Frederick “Hank” Robar stands in one of his toilet gardens on the corner of Market and Pleasant streets in Potsdam last week. Christopher Lenney/Watertown Daily Times

POTSDAM — The toilet gardens will stay, at least for now, a judge ruled Monday.

A federal court has ordered that the village may not remove Frederick “Hank” Robar’s “toilet gardens” until his lawsuit is settled.

Senior U.S. District Court Judge Lawrence E. Kahn, Albany, granted Mr. Robar’s request for a preliminary injunction Monday, requiring the village to cease from removing any items, including his infamous “porcelain planters,” from all seven of his properties across the village.

The judge, in a 42-page decision, denied a request by Mr. Robar’s attorneys to officially declare that his porcelain gardens are not “junk,” as defined by village code.

“Mr. Robar is immensely relieved to know that his art is protected for the immediate future. The Court’s decision is thoughtful and comprehensive. As the Court conclusively found, Mr. Robar’s art is protected by the First Amendment and Mr. Robar is likely to succeed in this lawsuit,” Jon E. Crain, an attorney for Mr. Robar from Whiteman, Osterman and Hanna LLP, Albany,, said in a statement Monday.

Last month, Mr. Robar sued the village claiming officials, in ordering him to remove the toilet gardens, were violating his First Amendment and Fourteenth Amendment rights, as well as the Visual Artists Rights Act of 1990. He claims the toilet gardens are protected under his rights to free speech as a form of protest.

The Visual Artists Rights Act grants artists the rights to prevent intentional modification to their art and the destruction of their work of “recognized stature,” such as the toilet gardens.

In July, the village passed a resolution ordering Mr. Robar to remove all bathroom fixtures, including toilets, from his properties around the village before Sept. 1, though both parties agreed not to take action until the judge granted a formal order on the matter.

On Sept. 7, attorneys for the village moved to request that the court dismiss the lawsuit in its entirety, claiming the case lacks merit to go to trial. The court has preliminarily scheduled a hearing on that motion for Oct. 16.

In late 2018, the village passed a junk storage law, aimed at allowing the village to specifically address properties that are “unsightly.” The law specifically defined “bathroom fixtures,” including toilets. Earlier this year, the village code enforcement officer issued Mr. Robar several tickets. He eventually opted, as allowed under the junk storage law, for a public hearing over the matter. In July, the village Board of Trustees passed a resolution ordering he remove all the “bathroom fixtures” from his properties.

The matter is the latest in a years-long battle between Mr. Robar and the village, dating back to 2005. After being denied a zoning variance on one of his properties, Mr. Robar began displaying toilets as a form of protest. Several previous attempts at forcing Mr. Robar to remove his “toilet gardens” have been unsuccessful.

A large portion of Mr. Robar’s suit hinges on claims that the village’s adoption of a junk storage law was “selectively enforced” against his junk art and not others living in the village. The judge wrote that Mr. Robar’s only evidence of such is nothing more than his sworn statement that he isn’t “personally aware” of any such instances in which the junk storage law has been enforced against other residents who publicly display repurposed junk.

“Accordingly, based on the evidence Plaintiff has presented at this time, the Court finds that he has not met his burden to show that the law has been selectively enforced against him,” Judge Kahn wrote.

Mr. Robar also said the adoption of the junk storage law was motivated by the village’s ill feelings — or “animus,” as stated in the judge’s decision — toward the toilet gardens. The court found there are several facts to undermine this claim as nearly 15 years separate Mr. Robar’s initial creation of the gardens and the present enforcement.

The junk storage law classifies mobile homes and motor vehicles as “junk,” which, the court said, suggests the village Board of Trustees thought the law through and considered its application to others in the village besides Mr. Robar.

In his reply, Mr. Robar notes the gardens are not site-specific and they can be moved and installed in various locations — the gardens can accomplish their artistic message and political protest as long as they are publicly visible, Mr. Robar said.

Judge Kahn went on to further explain that Mr. Robar contradicted himself in his reply as he does not suggest the relocation of the gardens would necessarily “damage” them and agrees they can be relocated. The court found the relocation cannot in itself be considered destruction.

“The Court respectfully disagrees,” Judge Kahn wrote, “the porcelain gardens are toilets, albeit ones brimming with constitutionally protected expression.”