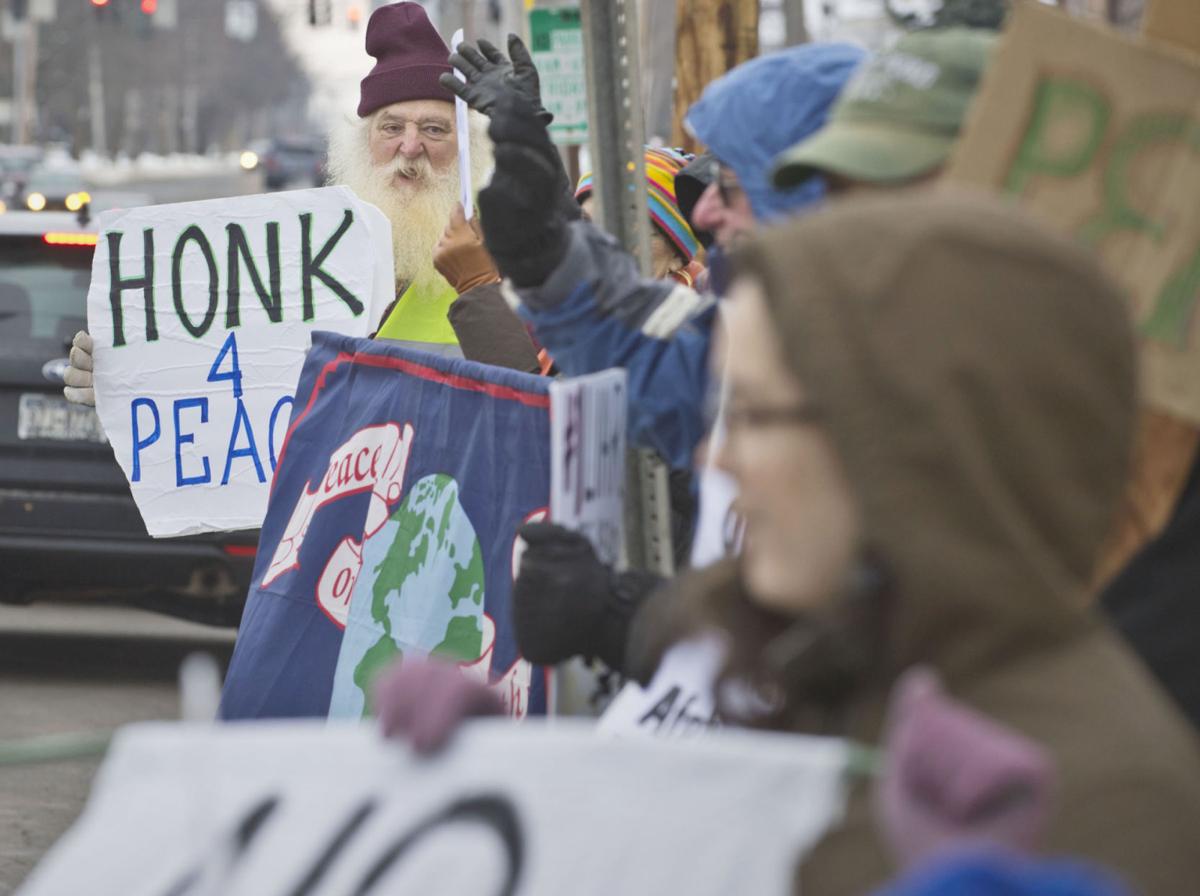 Standing on the curb in front of the Potsdam Post Office, Allen Lumley, back, and other demonstrators react Saturday as a passing motorist honks his horn, acknowledging their signs opposing war with Iran. Christopher Lenney/Watertown Daily Times 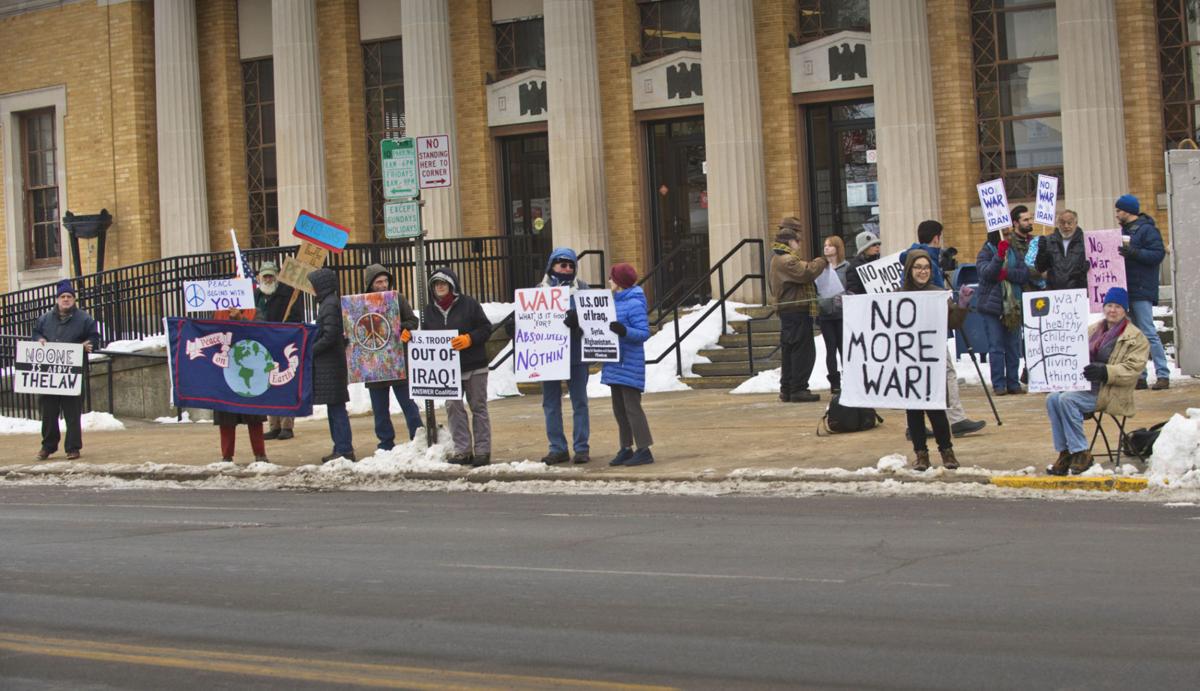 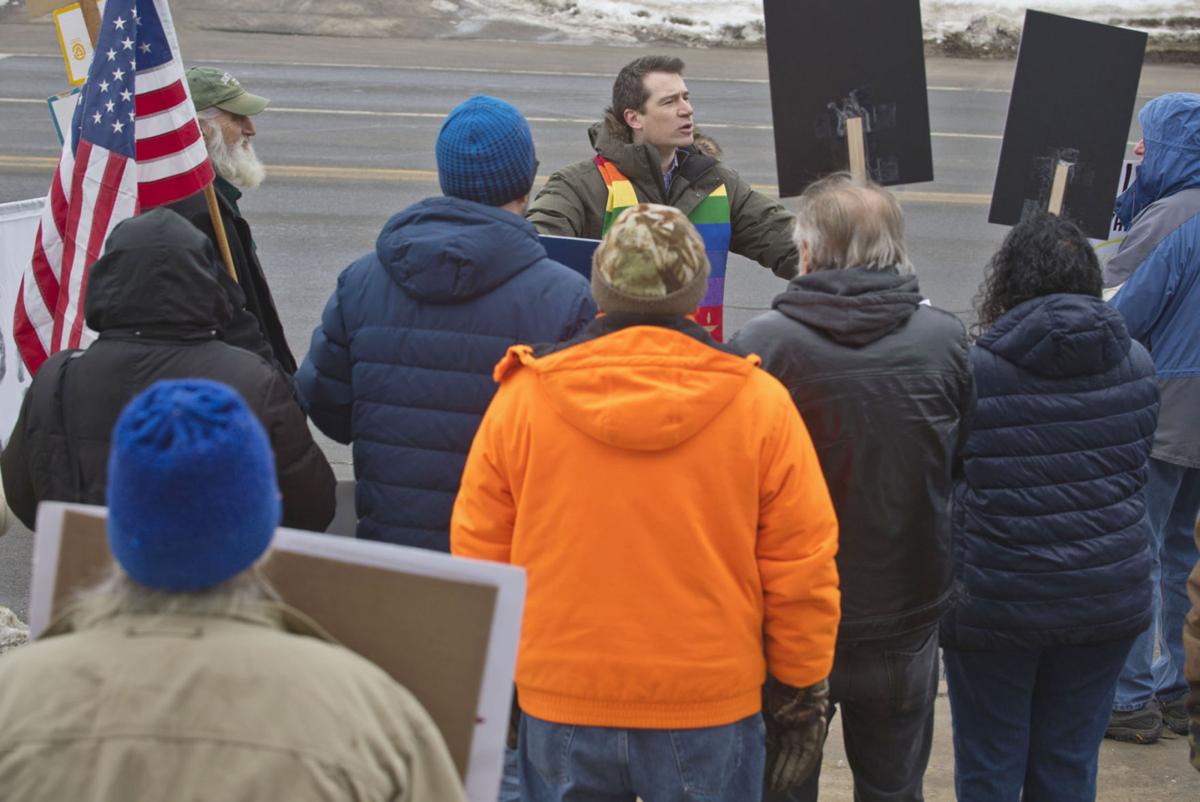 On the sidewalk in front of the Potsdam Post Office, The Rev. James Galasinski addresses demonstrators Saturday during a rally opposing any potential war with Iran. Christopher Lenney/Watertown Daily Times

Standing on the curb in front of the Potsdam Post Office, Allen Lumley, back, and other demonstrators react Saturday as a passing motorist honks his horn, acknowledging their signs opposing war with Iran. Christopher Lenney/Watertown Daily Times

On the sidewalk in front of the Potsdam Post Office, The Rev. James Galasinski addresses demonstrators Saturday during a rally opposing any potential war with Iran. Christopher Lenney/Watertown Daily Times

POTSDAM — Horns were honking, flags were waving and signs were calling for peace.

Despite the unpleasant weather conditions late Saturday morning, community members gathered in front of the U.S. Post Office to demonstrate their desire for peace in the Middle East and the hopes that there are no potential conflicts or war between Iran and the U.S.

It was an amalgamation of community members that lined the sidewalk, encouraging drivers to “honk for peace” through signage. Other signs were held by veterans with flags attached to them announcing veterans for peace.

The “No War with Iran — Day of Protest” was organized by Town Councilwoman Toni Kennedy, who emphasized that she was acting not as an elected official, but as an activist and member of the Act Now to Stop War and End Racism Coalition.

The protest was announced immediately following the Jan. 3 U.S. assassination of top Iranian military commander Maj. Gen. Qassem Soleimani, which resulted in escalating tensions between the two countries with threats of the start of a new war in the Middle East.

Ms. Kennedy and her group joined Howard William “Bill” Beebe and a group that is out in front of the Post Office on Elm Street every week demonstrating.

“We have a point of view, generally, but in principle people can come with any issue they are concerned about,” Mr. Beebe said. “I have a sign that says “No one is above the law,” you might infer what that references. Sometimes I hold a sign that says “there is no planet B” which is about the climate crisis and our opposition to any kind of war with Iran. But people come with their concerns and they hold any sign they want to.”

This Saturday, however, he said the turnout is predominantly to express opposition to a conflict with Iran.

What was important was that the event was non-partisan, Ms. Kennedy said.

“We want to say, as Americans, we oppose another catastrophic war in the Middle East,” she told the Times. “We feel like we should be leading with diplomacy instead of always intervening in the Middle East and sending our troops out in harm’s way. When escalations were rising with Iran, I organized this with the Answer Coalition, in order to say that we as Americans don’t want this.”

And although tensions have been calmed since the days of the Soleimani assassination, Ms. Kennedy said there are still concerns surrounding the anti-American protests in Iraq and that the withdrawal from the Iran nuclear deal has not helped relations between the two nations.

“So the Middle East is a very complicated place and our government, as a whole, should think about the consequence of their actions before they make decisions to intervene in other country’s elections or assassinate leaders from other countries, no matter if the leaders are bad people or not,“ she said. “We kind of have to balance the number of lives that are going to be lost if those actions lead us to war. So I think that we just need to try more diplomacy and less aggression when it comes to the Middle East because actions have consequences.”

About 15 minutes after the start of the 11 a.m. protest, demonstrators gathered around the Rev. James T. Galasinski of Canton Unitarian Universalist Church, who said the event should be more than promoting peace — it should be a way to remind people that we are all connected.

“And I think what is grounded in our sense and our purpose of peace is a sense of interconnection, a sense of interdependence. We are interconnected with each other, economically, biologically — we share the same DNA, basically — but I think there is not a lot that separates us from Iranians,“ he told the crowd of about two dozen. “It is because of this sense of innerconnection and network of mutuality that over the last few decades, since World War II, peace is winning.

But he said the worldwide rise of nationalism has caused him fear.

“And I would like to say one thing and remind you, we are not so much a nation as we are a species,” he said. “We can advance without moving and ... it is better to yield than to use aggression. We need to remind the world that we are interconnected in networks or mutuality, that we are not a nation, we are a species.”

Instead of killing a known terrorist maybe we should have given Iran $150 billion dollars like the previous administration did. Protest all you want, there was no war with Iran...

We must be willing to go to war with Iraq to help Trump get re-elected. Let's not put any spin on it, and lets cut the political correctness. Our soldiers are asked to give up their lives in war, Trump was not even willing to sell his businesses to serve his country fully. Remember Troops: Trump doesn;t like POW's, he publicly says American soldiers who are captured are not heroes.

“Soldiers” today are ‘all volunteer’ they know the risks when they sign up. It is the life they have chosen.

What a bunch of ice cream cups. No one wants war. The blame is beyond common sense. No worries if they killed your son or daughter no problem right!!!!!!!!