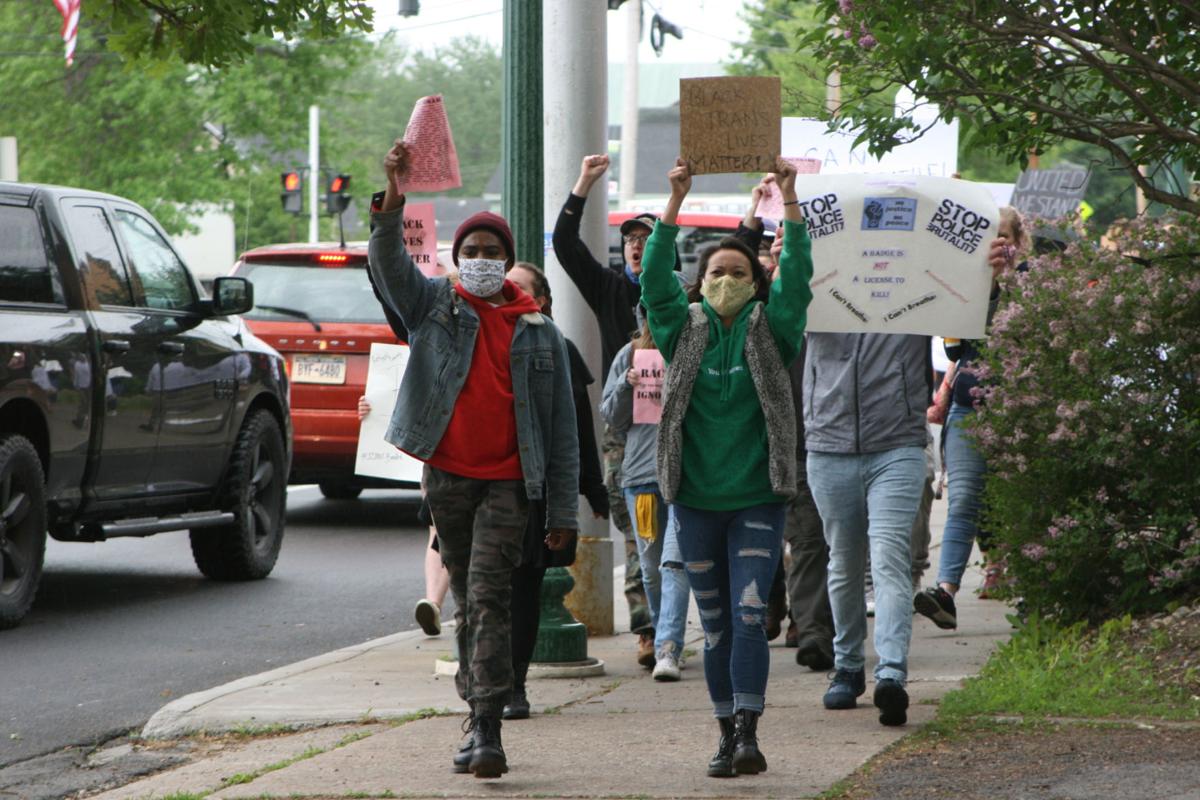 Massena protesters make their way to the Massena Town Hall to continue a peaceful protest that had started nearly a mile away at the intersection of East Orvis Street and Parker Avenue. Bob Beckstead/Watertown Daily Times 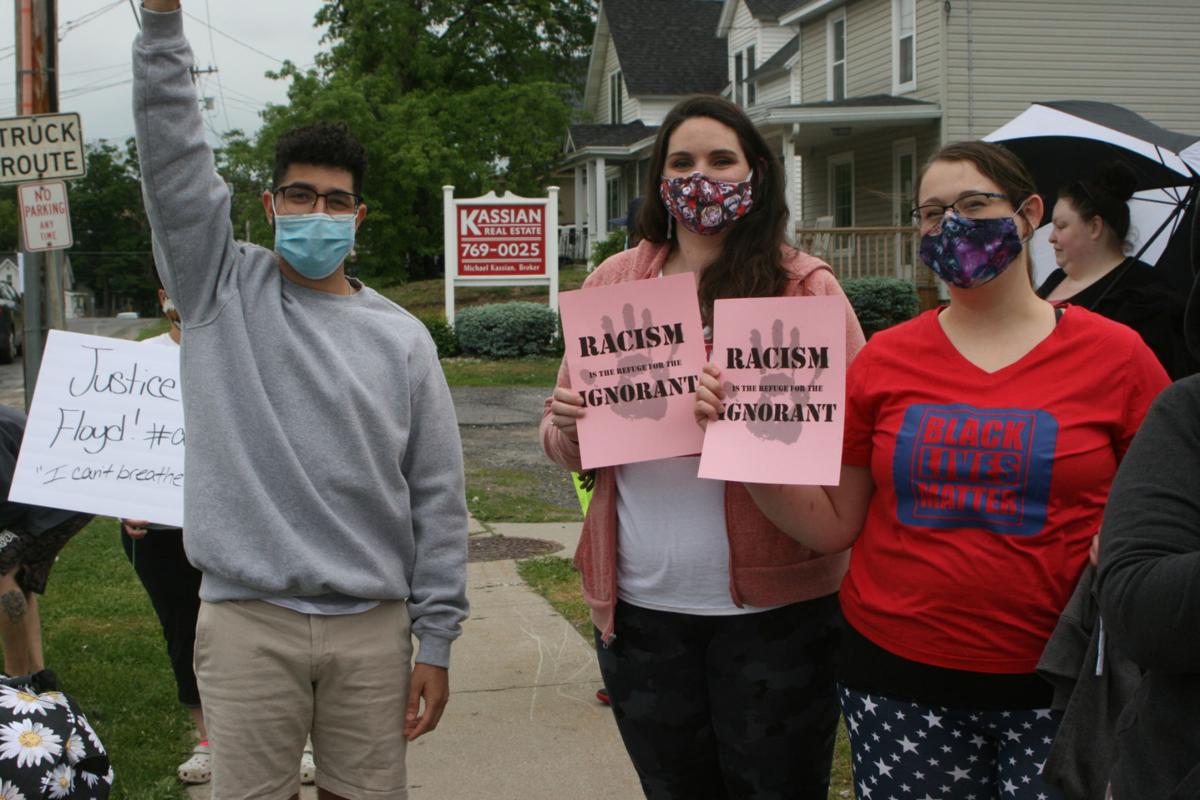 About 50 people were on hand for a peaceful protest Monday afternoon in Massena, starting at the intersection of East Orvis Street and Parker Avenue. Bob Beckstead/Watertown Daily Times 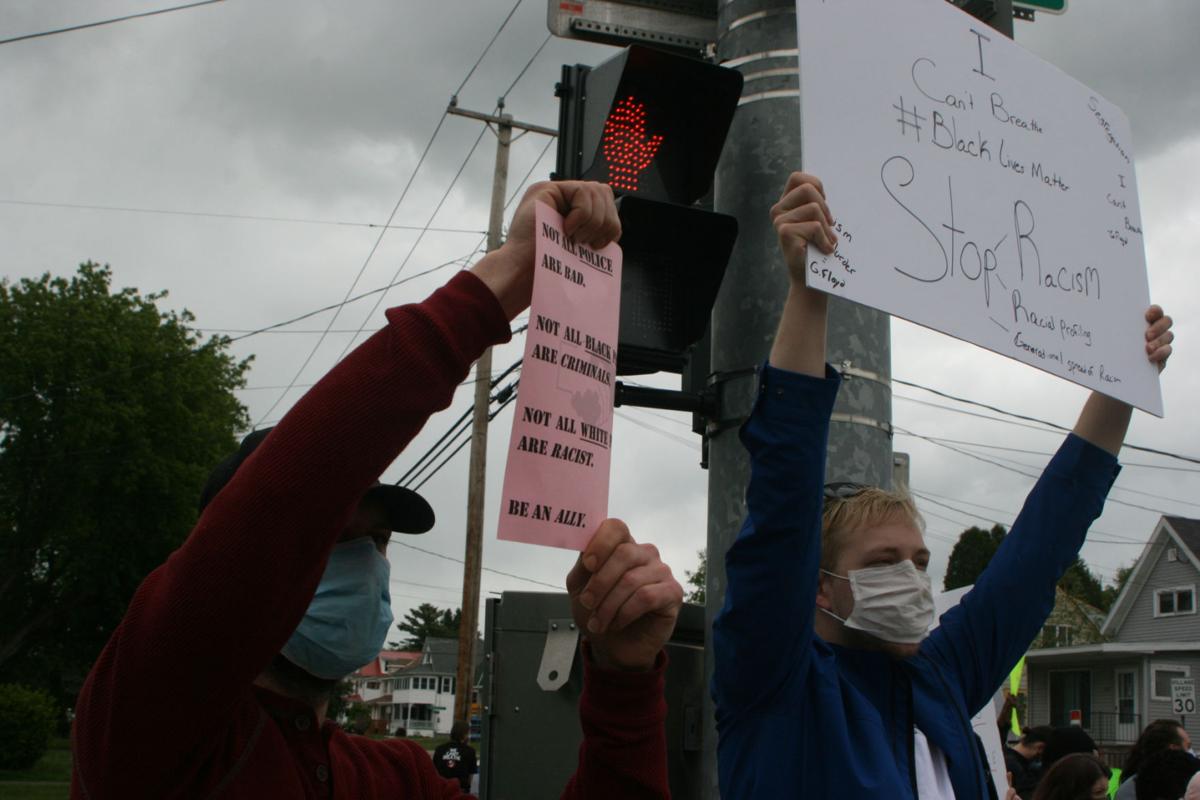 Massena protesters make their way to the Massena Town Hall to continue a peaceful protest that had started nearly a mile away at the intersection of East Orvis Street and Parker Avenue. Bob Beckstead/Watertown Daily Times

About 50 people were on hand for a peaceful protest Monday afternoon in Massena, starting at the intersection of East Orvis Street and Parker Avenue. Bob Beckstead/Watertown Daily Times

MASSENA — A cold rain couldn’t keep about 50 people from joining with other communities in staging a peaceful “Protest to Support Justice for George Floyd” on Monday.

The event was publicized by flyers around town and a listing under Facebook events. Organizer Adison Champion had advised participants that the protest would be peaceful to show support for George Floyd and members of the black community, and if they couldn’t abide by that, they weren’t welcome.

The Massena Police Department said in a social media posting that they were aware of the protest.

“The Massena Police Department is aware of a peaceful protest that will occur on June 1st from 12 p.m. until 12 a.m. The Chief of Police has been in contact with the organizer and he has been assured this will remain a peaceful protest,” they wrote. “The Massena Police Department does not support police brutality or condone racism. We support PEACEFUL protests.”

And it was, as the group protested in remembrance of Mr. Floyd, who was black. He died after Derek Chauvin, a white and now former Minneapolis police officer, knelt on his neck for eight minutes and 46 seconds, with two minutes and 53 seconds occurring after Mr. Floyd was unresponsive, according to a criminal complaint.

The group initially met at the intersection of Parker Avenue and East Orvis Street, where they held up signs and vocalized their feelings as vehicles honked their horns while driving by. Signs held by the protesters shared their feelings — Enough Is Enough; Black Lives Matter; Human Dignity Not White Supremacy; Racism is the Refuge for the Ignorant; Silence Fuels Injustice — Black Lives Matter.

Paige Davis said she was on hand to support the fact that the Black Lives Matter movement was important.

“Just knowing basic rights are not earned, but given,” she said.

“I have a lot of students who mean a lot to me. My sorority sisters experienced what I didn’t,” said Rebecca Jewell, who teaches at local colleges.

“I don’t want to die in a world like this. I want to do better. That’s why I’m showing up. Every person has to take a part. This is my duty and obligation to answer the call,” she said.

The group also walked the nearly one mile down East Orvis Street to the Massena Town Hall, where they continued their protest.

Cobb is wasting her time.

Meanwhile, Elise Stefanik, the darling of NNY360, continues to fully support the position and actions of the "mad emperor."

Trump has reached the 'mad emperor' stage, and it's terrifying to behold

Did you happen to see Tedra's tweet? I'm still waiting to see if her account was hacked or if she actually tweeted it herself. I hope it was hers.

It's on newzjunky bonafide Holmes. It won't let me post it cause there's a 'bad' word in it.

Thanks rockloper. I went to the twitter link for Tedra Cobb for Congress and it was there too (wasn't there when I looked earlier this am). It shows up as a "pinned tweet" (whatever that is). Maybe some commenter who has a twitter account can clear that up for me? Looks as if it is legit.

I don't have a problem with that sentiment -- seems like it sums it up well.

The "naughty" words detector on this site is pretty weird. You can't even link something that says na -zi -- even if it's from the Holocaust museum.

In her last campaign at one of the parades I was saying 'Truth to Power" and she told me she rather I didn't cause she wanted to keep the campaign clean. I told her her wish is my command but I didn't think anything was bad about it.[innocent] If that tweet came from her campaign for her that would be something. You already know my stance is I think we have to get in the mud with them. Republicans certainly don't have the moral high ground even if it gets a little muddy.

Hmm. I’ve been thinking about this and simply can’t come up with any reason that “Truth to Power” would come off as somehow not clean. Maybe she meant she wanted to keep it focused just between her opponent and herself?

I wasn’t offended by the language of the tweet and I’m pretty sure that most people wouldn’t be shocked – since it pretty much said colloquially what we can all see is true.

Stefanik telling outright lies about her opponent is much more egregious.