OGDENSBURG — The re-establishment of a city beach on Ogdensburg Bridge and Port Authority land has caught the attention and support of a north country senator.

In her letter to Mr. Lawrence dated Friday, Sen. Ritchie said she was recently contacted by city leadership, which requested she voice her support of the effort.

“As you know, countless City of Ogdensburg residents enjoyed the beach for many years,” the letter states. “I myself visited the beach as a child for swimming lessons. Today, during frequent walks on the trail, I walk by the beach and wonder — like many others do — why something that was enjoyed by so many sits unused, with no other family beach in the area.

“Because the land sits unused, I would respectfully like to request that the Ogdensburg Bridge and Port Authority Board of Directors work with the City to see whether it would be suitable to again reopen the beach,” the senator continued in her letter. “Doing so would provide families, individuals and visitors to our area with increased opportunities to enjoy the St. Lawrence River.”

Mr. Lawrence said Monday afternoon that he didn’t know about the letter Sen. Ritchie sent him as he hadn’t seen it yet.

City Council, during its March 24 meeting, passed a resolution setting a goal to open a city beach by July 1.

The resolution passed unanimously as councilors Michael B. Powers, Daniel E. Skamperle, John A. Rishe, William B. Dillabough, Steven M. Fisher and Mayor Jeffrey M. Skelly voted in favor of the goal. Councilor Nichole L. Kennedy was not in attendance that night.

The resolution states that the least expensive and quickest way to achieve the July 1 goal is to reopen the former city beach on the grounds of the Ogdensburg Bridge and Port Authority. The resolution also directed the city manager to begin negotiations on the lease of the land for the purpose of reopening the beach.

Costs associated with operating and maintaining the beach will be borne by the city or through a cooperative arrangement with OBPA, the resolution states.

Mr. Lawrence said OBPA wasn’t made aware of council’s desire to reopen the beach until the resolution was passed.

“We just found out about it through the council meeting,” Mr. Lawrence said Monday.

He said there had been some “general discussions” about it, but there hasn’t been time to present the idea to the entire OBPA Board of Directors.

Once the resolution was passed, the city requested a meeting with OBPA leadership, he said.

“Ogdensburg residents are truly lucky to live alongside the St. Lawrence River,” the senator’s letter states, “a beautiful natural resource that offers endless opportunities for outdoor recreation and scenic enjoyment. I believe we should all work together and do all we can to provide local residents, as well as visitors to our community, with increased chances to enjoy this gem of our region.”

Mayor Skelly said Monday he was “very happy” to learn of Sen. Ritchie’s support for the city beach.

Read the full letter below: 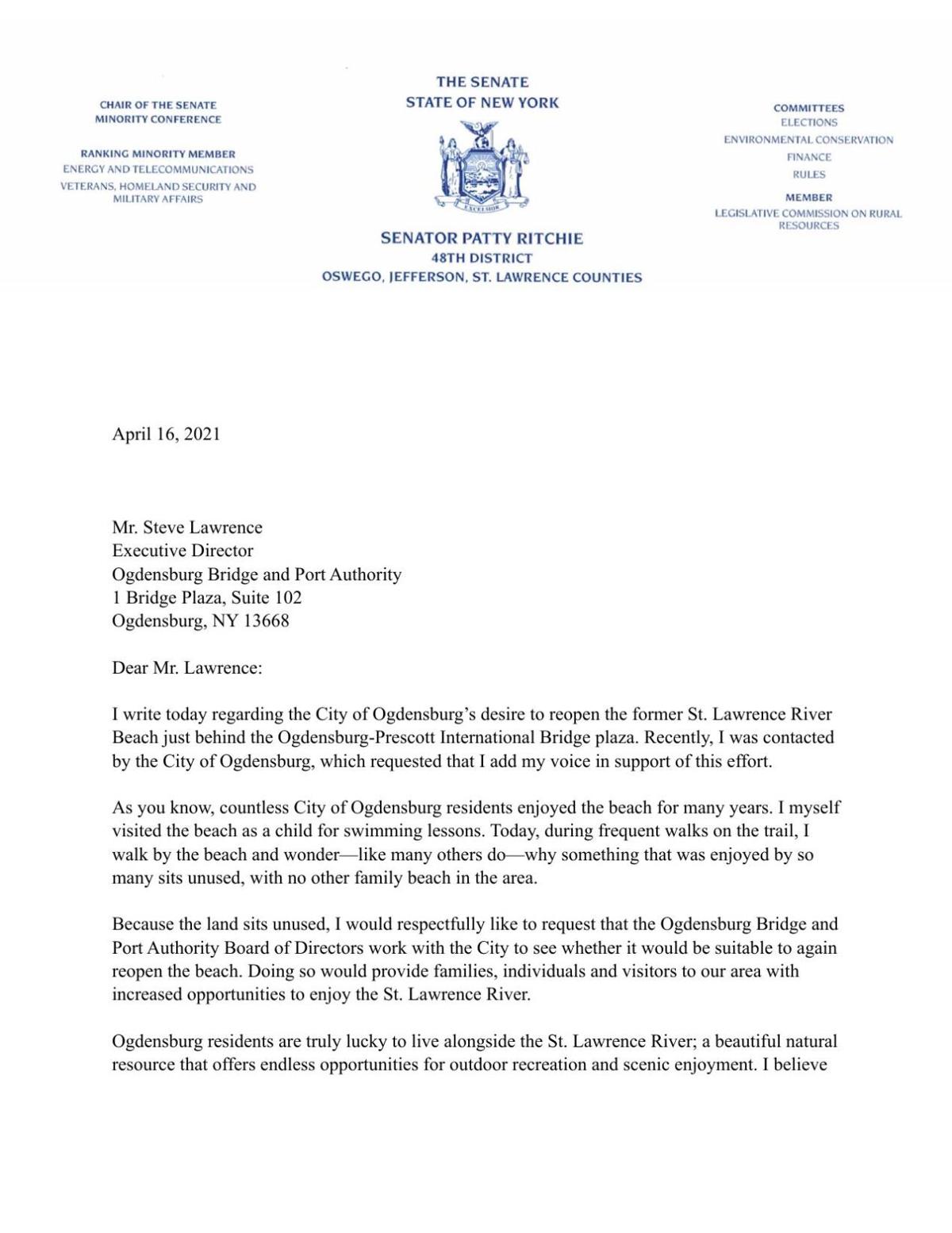 Make sense, after all Ritchie and Skelly are related. We all know the City won't be represented by a Recreation Director (position cut). Sure it would be great to have a beach. Hopefully Ritchie's "support" is better than just lip service like she did with her "support" of the Ogdensburg Fire Dept. Another thought: why doesn't the OBPA run the beach along with their new Daycare center? I mean if our property taxes can't go to many other things that were cut, why does our property taxes have to go to a beach? The OBPA can avoid the property tax burden.