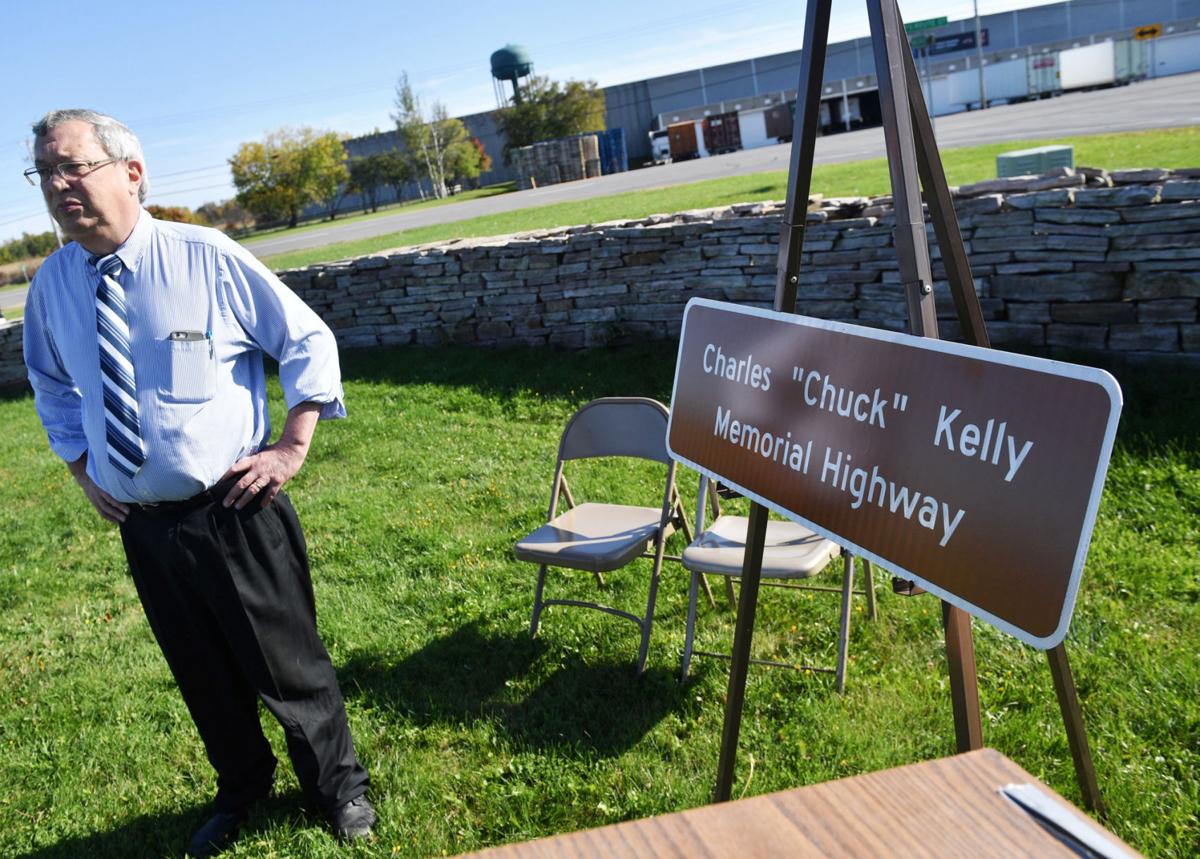 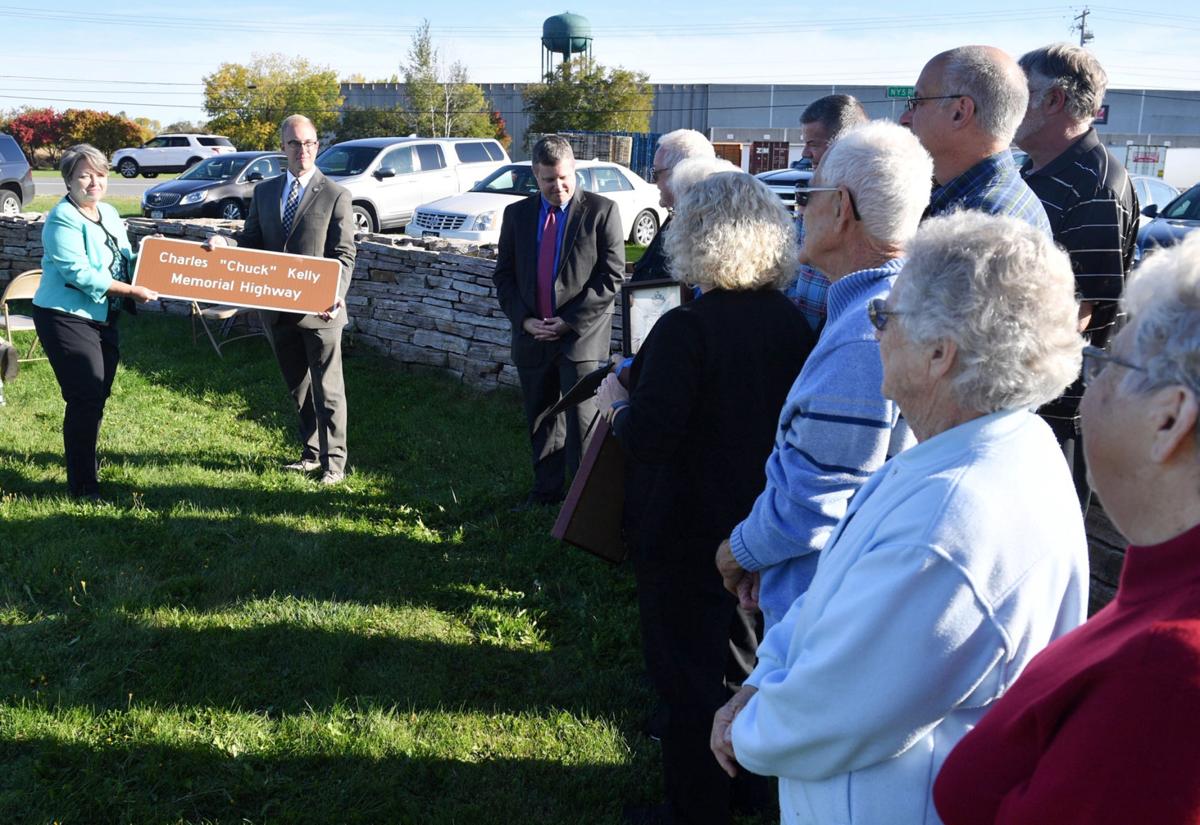 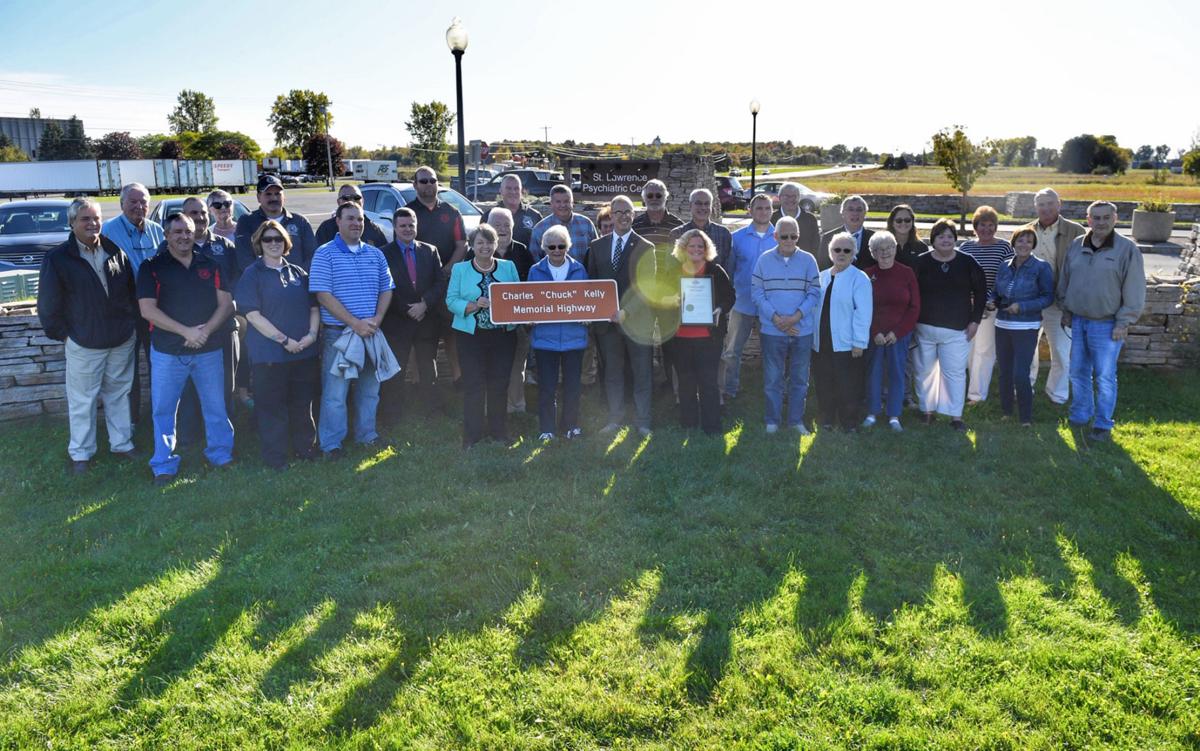 Members of Charles W. Kelly’s family, many of his friends and correctional officers met near Route 37 in Ogdensburg Tuesday to remember the late newspaperman and name a section of the road in his memory. Christopher Lenney/Watertown Daily Times.

Members of Charles W. Kelly’s family, many of his friends and correctional officers met near Route 37 in Ogdensburg Tuesday to remember the late newspaperman and name a section of the road in his memory. Christopher Lenney/Watertown Daily Times.

OGDENSBURG — In the shadow of his signature achievements, the Ogdensburg and Riverview correctional facilities and the St. Lawrence Psychiatric Center, the friends, family and admirers of Charles W. Kelly gathered Tuesday afternoon to unveil signs indicating a portion of Route 37 will be known as the Charles “Chuck” Kelly Memorial Highway.

The ceremony was only lightly promoted and still 50 people assembled on the edge of the highway near the entrance to the Psychiatric Center to honor and remember the long-time newspaper publisher and editor and champion of Northern New York.

“Chuck Kelly was a one-of-a-kind journalist who used his talents to inform the people he served and to strengthen his community,” State Sen. Patricia A. Ritchie, R-Heuvelton, said. “He was a great friend and true champion for the north country and its people. We miss Chuck every day, but by renaming this stretch of roadway in his honor we remember him and ensure the rich legacy he left behind will never be forgotten.”

“Chuck was there every single day fighting to make this a place to live, work and raise a family for generations to come,” Assemblyman Mark C. Walczyk, R-Watertown, said.

James E. Reagen, his long-time colleague and former managing editor of the Ogdensburg Journal and now county legislator, told a story about when he and Mr. Kelly were walking through Albany and were stopped by a limousine carrying former Gov. Mario Cuomo, who asked Mr. Kelly if he had heard that he had proposed Ogdensburg as one of the state’s first Opportunity Zones. Mr. Kelly replied that he wanted another prison, even though a new prison had just been built in Ogdensburg.

“And sure enough, Riverview Correctional Facility was built a couple of years later and Ogdensburg was one of the first communities in the state to be part of Governor Cuomo’s Opportunity Zone program,” Mr. Reagen said. “That’s the kind of influence Chuck had. There are few people in the north country that are ever going to achieve that level relationship with people like the governor.”

In the fight to save the psychiatric center, Mr. Nelson said Mr. Kelly’s assistance was indispensable.

“The governor opted to make the decision to turn the psych center into a Center of Excellence rather than close it because he did not want the wrath of Chuck Kelly and the wrath of the citizens of Ogdensburg and the north country coming down to Albany,” Mr. Nelson said.

“Chuck had a fearlessness that was truly remarkable,” he said. “When you think about how many of us are held back by how we’re going to look, how we sound, how we are going to come across, those limitations just weren’t part of his makeup.”

The signs marking the memorial highway are on the south side, near New York Avenue and on the north near the entrance to the St. Lawrence Psychiatric Center.

“Anytime people come into or leave Ogdensburg, they will be reminded of Chuck’s great legacy,” John B. Johnson, publisher and CEO of the Watertown Daily Times, said. “He provided a true path for the community.”