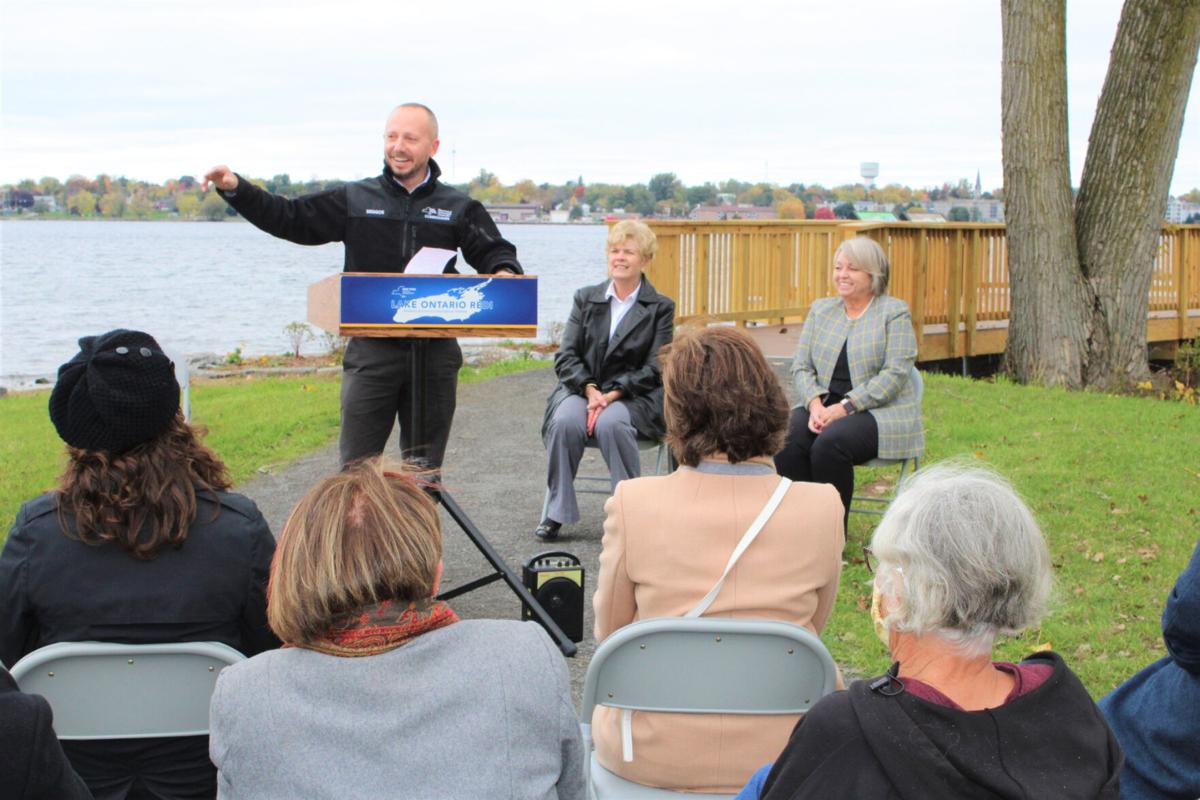 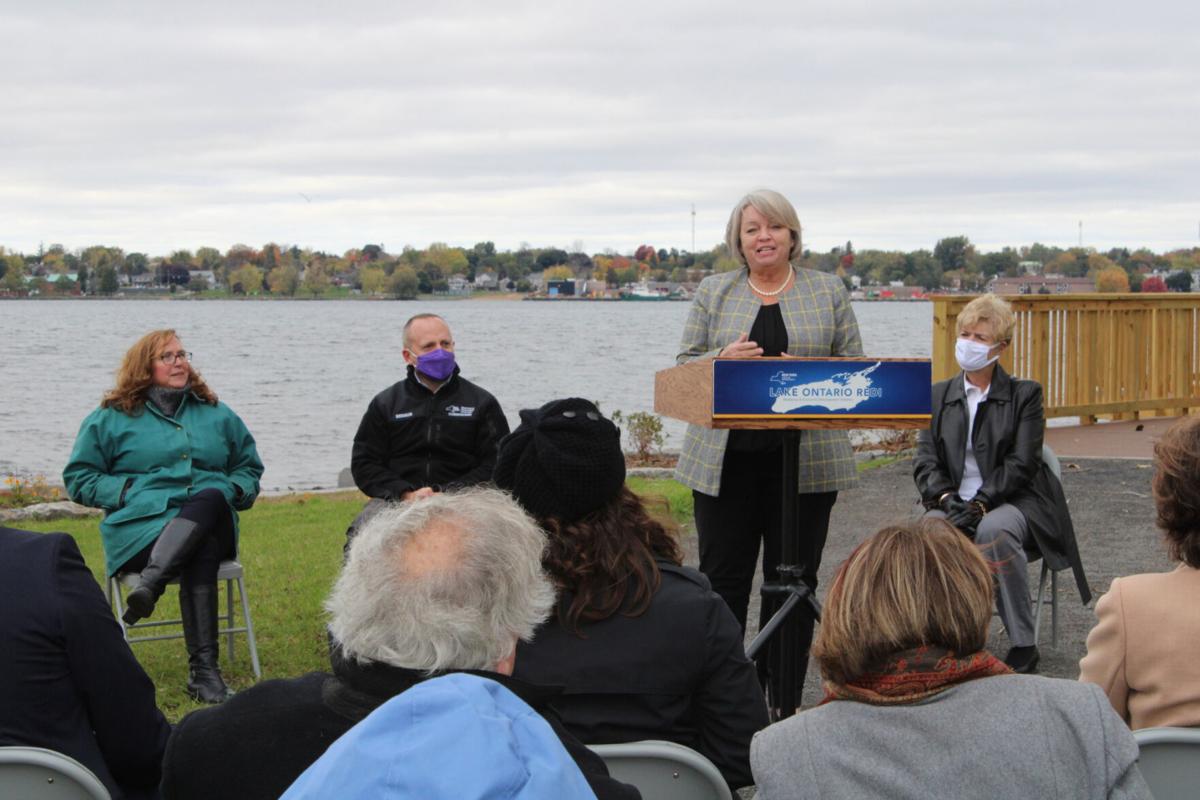 Sen. Patricia A. Ritchie speaks at a ribbon-cutting of a $1.3 million project in Ogdensburg that stabilized shorelines on the St. Lawrence and Oswegatchie rivers at Lighthouse Point thanks to funding from the Lake Ontario Resiliency and Economic Development Initiative (REDI). Matt Curatolo/Watertown Daily Times 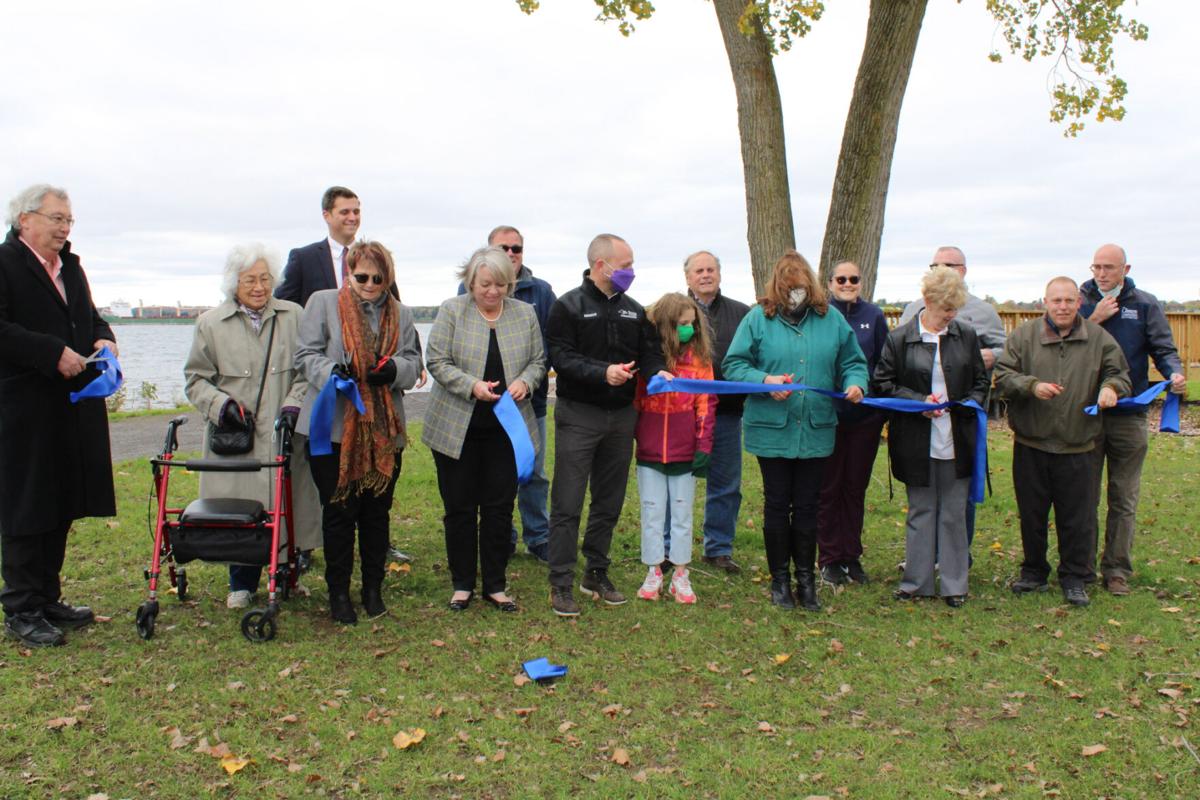 State officials and members of the Fort de la Presentation Association participate in a ribbon-cutting announcing the completion of a $1.3 million shoreline stabilization project at Lighthouse Point in Ogdensburg. Matt Curatolo/Watertown Daily Times

Sen. Patricia A. Ritchie speaks at a ribbon-cutting of a $1.3 million project in Ogdensburg that stabilized shorelines on the St. Lawrence and Oswegatchie rivers at Lighthouse Point thanks to funding from the Lake Ontario Resiliency and Economic Development Initiative (REDI). Matt Curatolo/Watertown Daily Times

State officials and members of the Fort de la Presentation Association participate in a ribbon-cutting announcing the completion of a $1.3 million shoreline stabilization project at Lighthouse Point in Ogdensburg. Matt Curatolo/Watertown Daily Times

OGDENSBURG — A project to stabilize the shorelines of the St. Lawrence and Oswegatchie rivers at Ogdensburg’s Van Rensselaer Point, shorelines that were devastated by flooding in 2019, is now complete.

At a news conference and ribbon-cutting Friday afternoon, the Fort de la Presentation Association unveiled the completion of the project at Van Rensselaer Point, commonly referred to as Lighthouse Point, funded by a $1.2 million grant from the Lake Ontario Resiliency and Economic Development Initiative (REDI).

Since the creation of the state’s REDI program in the spring of 2019, 134 REDI funded local and regional projects are underway, including 85 projects in the design phase, 21 projects in the construction phase and 28 projects have been completed.

“With the support of Governor Hochul, and the partnership with New York State, the Fort Association was able to take the needed measures to stabilize the St. Lawrence and Oswegatchie river shorelines and repair and enhance the Abbe Picquet Trail. Through the Resiliency and Economic Development Initiative, we are now able to ensure that Fort de La Presentation remains accessible to the community, and tourists, as well as protected the National Register of Historic Places for future generations,” said Barbara O’Keefe, fort association president, before a small group congregated along the St. Lawrence River near a new boardwalk.

She credited the REDI “team,” with support from the state Office of Parks, Recreation and Historic Preservation (OPRHP), the state Department of Environmental Conservation (DEC) and the Dormitory Authority of the State of New York (DASNY) as well as Mother Nature in enabling them to complete the project ahead of schedule.

“Lastly I would like to thank Mother Nature. You may have caused the problem, with high water and flooding, but the low water level this year helped us complete the shoreline stabilization and Abbe Picquet Trail enhancements ahead of schedule with a much enhanced and beautiful site for all to enjoy,” said Ms. O’Keefe.

DEC Commissioner Basil Seggos, who said that he spends a lot of time on the St. Lawrence River, is well aware and personally witnessed the affects of the flooding in 2017 and then again in 2019. The REDI program, according to Seggos, was able to get much needed funding to the communities along the river and Lake Ontario to prevent major damage any high water levels in the future.

“This is a great day. We get to cut the ribbon on a really important project for the city and for the river itself and all of its people. This 1.3 million dollar project along the waterfront and Fort de la Presentation,” said Mr. Seggos, “So of course we are standing on land right now that was flooding during 2019 and 2017 as well and because of our enhancements now we are confident that this property will be protected.”

Peyton Taylor, director of the Thousand Islands State Park Region of OPRHP, described what the project entailed. Pointing to the St. Lawrence River shoreline behind her, Ms. Taylor said that large limestone rocks were installed to help build up the shoreline above flood level. Top soil was back filled and native vegetation was planted to help improve the habitat as well.

A new boardwalk was installed that will allow people to view the river comfortably and the walking trail was elevated to prevent any pooling of water as well.

On the Oswegatchie side, Ms. Taylor said that an innovative practice was instituted where rip-rap was installed along with native tree species to help stabilize the area and a “creative solution” of taking a dead tree with a large root system and placing them perpendicular to the shoreline and pile large rocks on it.

“But what that does now you have these root systems that protrude out into the water and they’re fantastic for creating aquatic habitat, they’re fantastic for slowing down erosion and just general resiliency for the shoreline. Those three strategies that were employed on this one site make this not only the first one to be done, but a fantastic model for any other community along the river that might want to explore what their options can be in protecting their shoreline,” said Ms. Taylor.

Sen. Patricia A. Ritchie, R-Heuvelton, who often walks on the trail often with her mother, said that she witnessed the damage the flooding did to the area and has witnessed the project’s progression.

“To have this fixed and look the way it is I think shows sometimes all levels of government can work together, many times we see the opposite,” Mrs. Ritchie said.

In a press release, Gov. Kathleen C. Hochul stated, “Like so many communities along the shores of Lake Ontario and the St. Lawrence River, the city of Ogdensburg is no stranger to devastating flooding and that’s why New York State’s REDI effort is leading the way with historic investments to help communities build back better, smarter, and more resilient. The Fort de la Presentation project in the city of Ogdensburg will help mitigate flooding and combat erosion, helping to maintain this historic gem for future generations while enhancing local wildlife habitat.”

The project was completed by T.J. Fiacco Construction, Norwood and Chazen Companies, Troy, was the engineering firm.