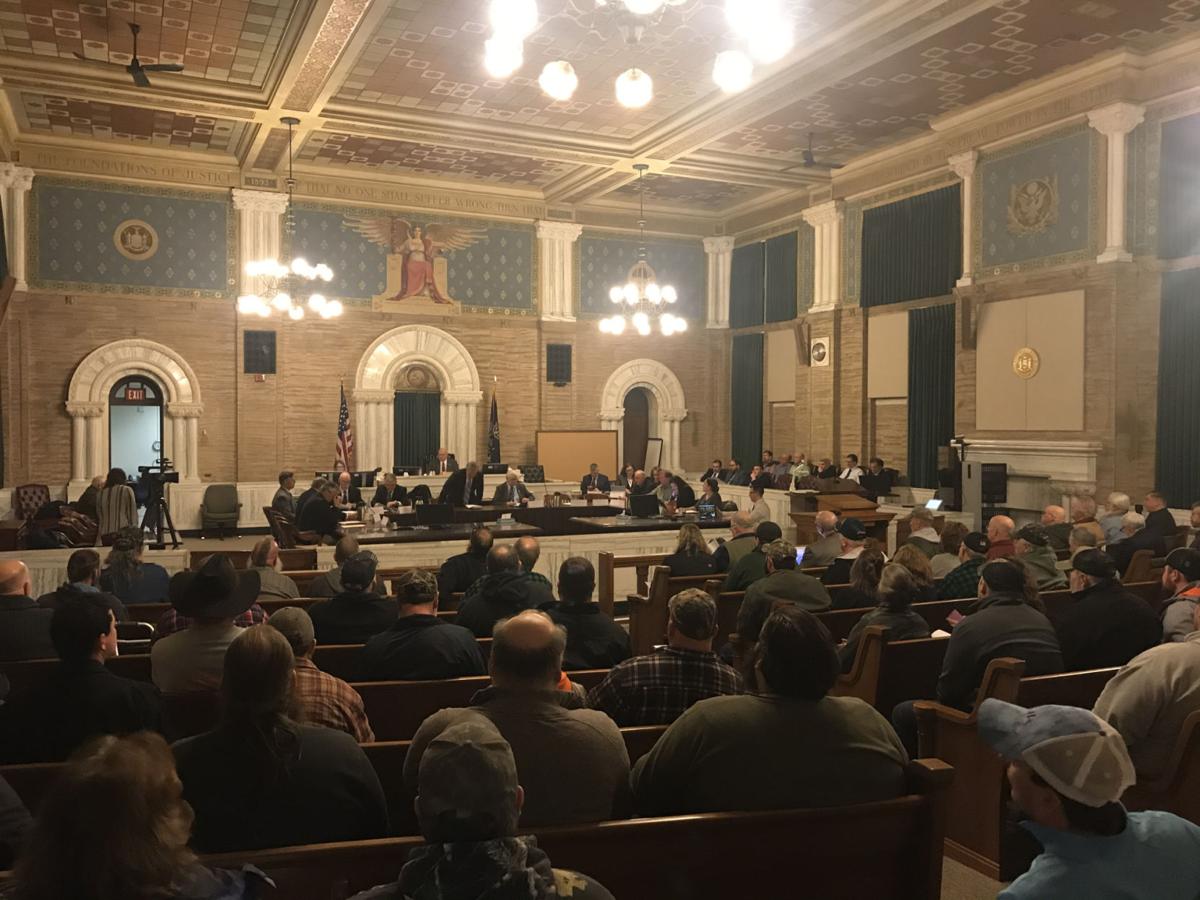 Demands that the St. Lawrence County Board of Legislators create a resolution declaring the county t a Second Amendment sanctuary Monday night, drew about 70 members of the public. W.T. Eckert/Watertown Daily Times 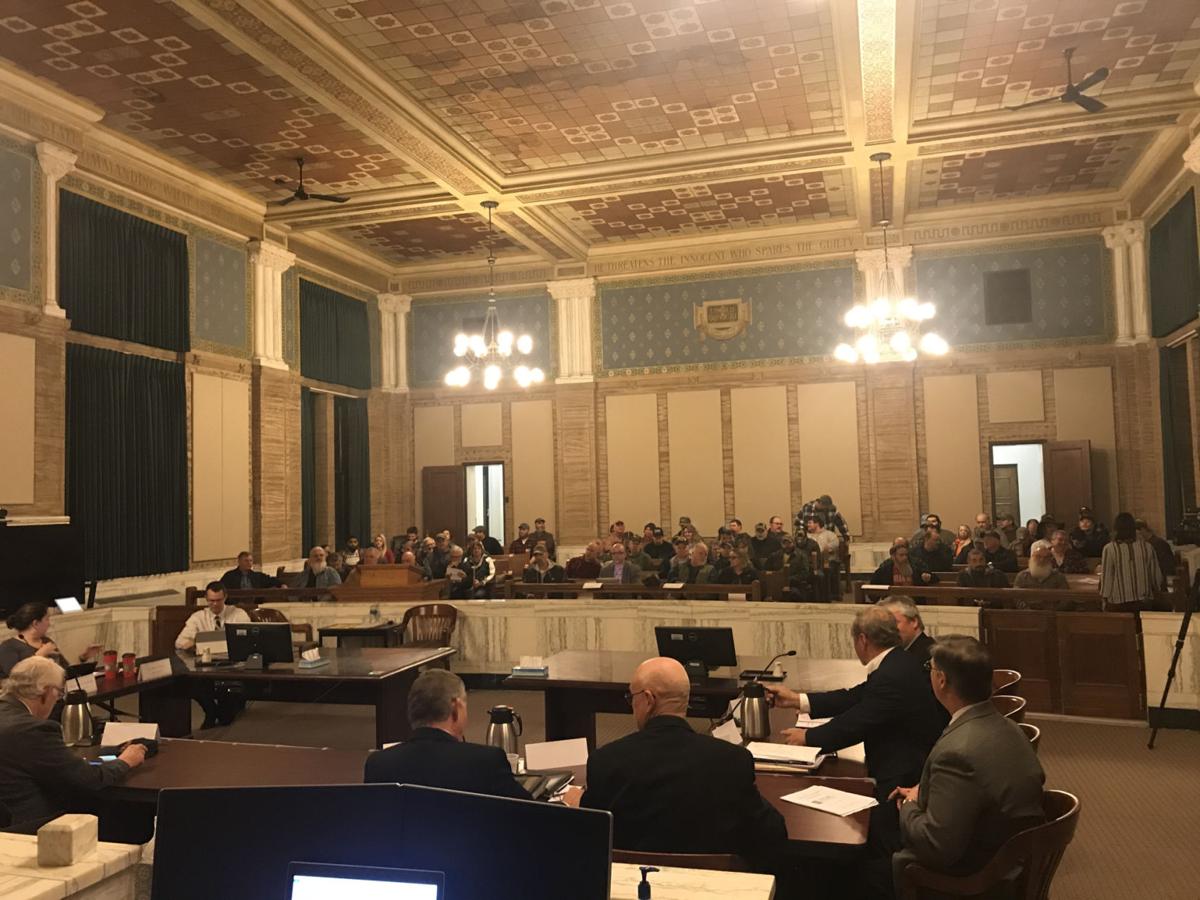 Demands that the St. Lawrence County Board of Legislators create a resolution declaring a Second Amendment sanctuary Monday night, drew about 70 members of the public. W.T. Eckert/Watertown Daily Times 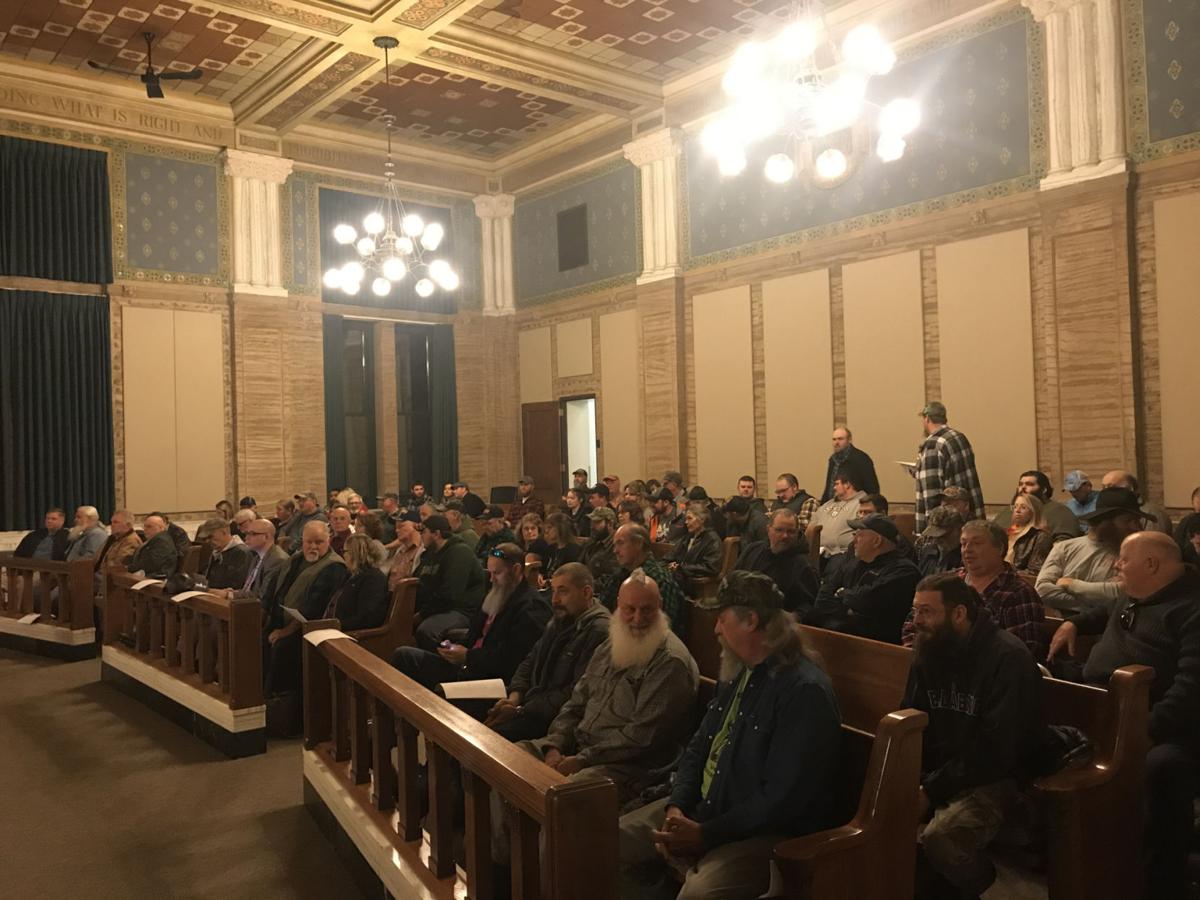 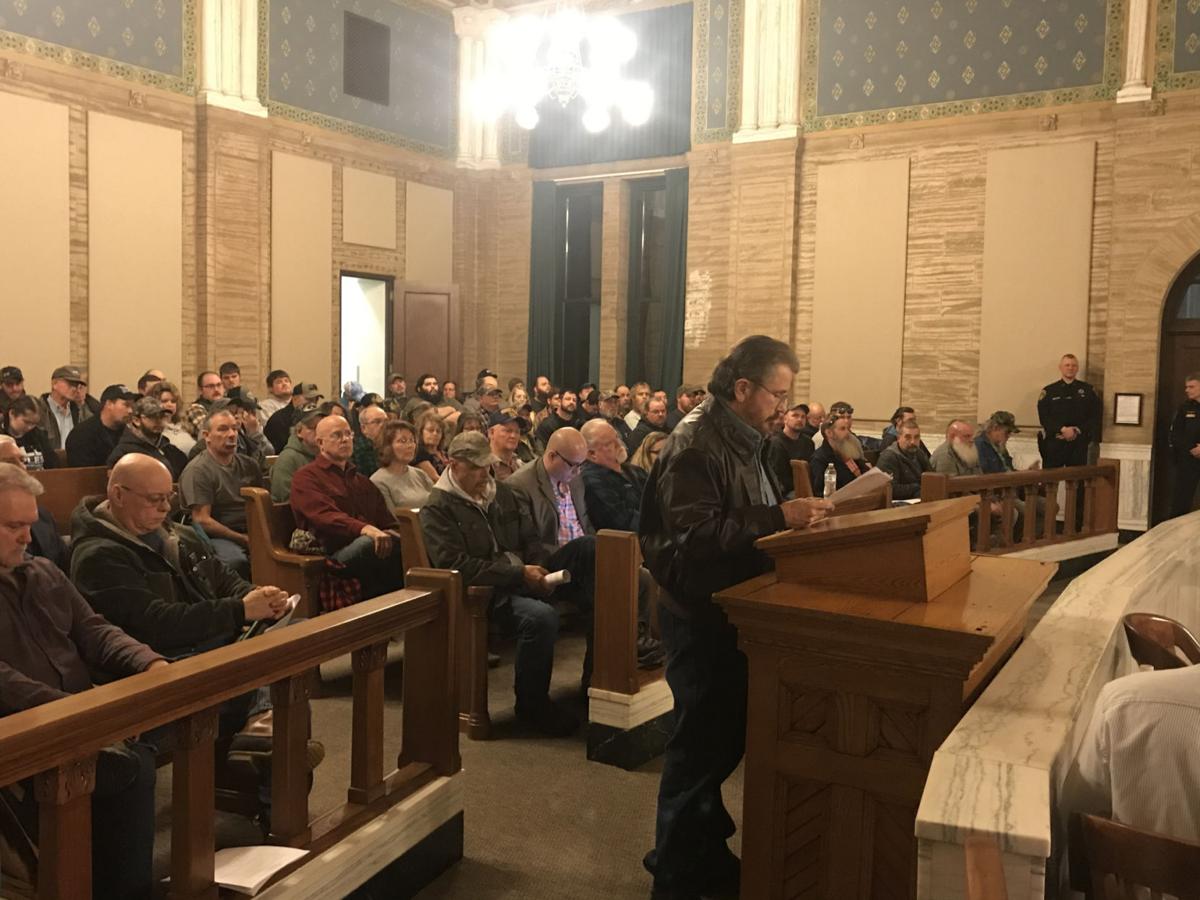 Demands that the St. Lawrence County Board of Legislators create a resolution declaring the county t a Second Amendment sanctuary Monday night, drew about 70 members of the public. W.T. Eckert/Watertown Daily Times

Demands that the St. Lawrence County Board of Legislators create a resolution declaring a Second Amendment sanctuary Monday night, drew about 70 members of the public. W.T. Eckert/Watertown Daily Times

CANTON — Demands that the St. Lawrence County Board of Legislators create a resolution declaring the county a Second Amendment sanctuary Monday night, drew about 70 members of the public, all in support.

Lawmakers had to move the meeting from the county Legislative Chambers to the St. Lawrence County Supreme Courtroom due to the numbers.

Among the crowd, 14 people signed up to address the board, many addressing their concerns that their Second Amendment rights were being infringed upon by the state, many citing the New York Secure Ammunition and Firearms Enforcement Act of 2013, or SAFE Act.

Wyatt Cole, Colton, spoke on behalf of the what he said was the newly formed St. Lawrence County and Town Second Amendment Sanctuary Facebook group, which was inspired by the Oneida County and Towns 2A Sanctuary private Facebook group which has 11,146 members along with events leading up to and following the pro-gun rights rally in Richmond, Va.

Mr. Cole said there were over 130 counties that have become Second Amendment Counties across the nation.

“If we continue to stand idly by while our constitutional rights are being infringed, it will allow these political machines to have domestic domain over the commonwealth of America,” Mr. Cole said. “It will lead to powerful and ambitious politicians to only work for their own profit and personal gain without the unity of the people for their common interests.”

He said while New Hampshire and Vermont have some of the loosest gun control laws in the country, they also have little gun violence.

“I also believe we all agree on something different than what the New York SAFE Act dictates for us here in St. Lawrence County and the north country in its entirety,” he said.

The Second Amendment Sanctuary County movement has also taken hold in Lewis County with the Jan. 4 creation of a Facebook page called “Lewis County and Towns 2A Sanctuary,” which has gained over 2,100 members.

Will Gray addressed the lawmakers, reminding them that the residents of the county relied on them to be their voices and to stand for them in areas where their constituents could not.

“These new laws and regulations are coming from downstate politicians who have no interest in rural St. Lawrence County,” Mr. Gray said. “Their only concern is New York City and the places surrounding them. Should those laws really count for us up here? We’re a different kind of people then they are.

“I would ask you, our local elected officials, to stand with you constituents and help us to create a sanctuary county for the good people that chose to give you our voice,” he said.

Dave Ellis stood before the board and recapped portions of American history and the drafting of the Constitution and said the Second Amendment had been infringed upon in recent years, “by some elected officials of the Empire State, chief among those being the emperor, Andrew M. Cuomo.”

“Why a certain sector of elected officials, whose job is to serve the public, are hellbent on trampling individual rights, boggles the minds of clear thinking folks,” Mr. Ellis said. “I believe it has to do with power and control. The battle over gun control is not really about guns, it is about control.”

He received a standing ovation when he asked that the county adopt the resolution that not only made the county a Second Amendment sanctuary, but one that affirmed the legislature’s commitment to upholding and protecting all of the Constitution, “so that all residents and visitors will know that the right of we the people take precedent over any and all attempts to disarm us.”

Following the nearly hour-long public comment period, Legislative Chairman Joseph R. Lightfoot., R-Ogdensburg, told the crowd that many of legislators have the same feeling about protecting their Second Amendment rights, but that “there is little we can do to fight the army of people that stand against us in Albany.”

“(T)his board has been very active in trying to protect the gun rights of the citizens of not only St. Lawrence County but of the state of New York,” he said, telling the crowd of what he called was unfamiliar faces, would know if they showed up to legislative meetings. “We have used our voices, time and time again to speak to the problems of pistol licenses and the restrictions upon them in St. Lawrence County. We even enacted a local law that was literally completely disregarded.”

Mr. Lightfoot told the crowd that they had the board’s ear, that they had been heard and that, while they board would not be acting on their request that night, the lawmakers would do the very best they can to represent and their views.

He said it may not be what the attendees want to see in the form of a sanctuary county, but it would be an attempt to convince Albany that, the state is going down the wrong road with gun regulations and the restrictions.

Sheriff Brooks J. Bigwarfe, during the new business portion of the meeting, after a majority of the crowd had dispersed, said he has his opinions on the gun restrictions created by the state and supports the Second Amendment, but he still has to follow the law.

He said members of the State Sheriff’s Association is not in support of the Second Amendment Sanctuary County movement for several reason, including the SAFE Act being a law that has to be enforced.

“Whether you like it or not, whether you agree with that opinion or not, it is the law, plain and simple,” he said. “Sheriffs, as law enforcement officials, can’t pick and choose what laws they want to enforce.”

Moreover, he said the Sheriffs Association raised the questions of “What was the need for the sudden movement?” and “Has there been a rash of SAFE Act arrests in recent months?”

“I can tell you, as a sheriff since the SAFE Act, no, there have been no arrests due to the safe act, none,” he said. “Not a one.”

About time Jefferson County gets on board!

At least St. Lawrence County has a Sheriff who understands what his job is compared to the fool in Lewis County. Sanctuary County = no state aid! LOL

Not sure if I agree with your comment about the sheriff. After reading the article and the sheriffs comments apparently, he hasn't heard of 'symbolic law' or 'prosecutorial discretion'... Truthfully, all laws are not enforced. He knows it.

The sheriffs job is to enforce the laws - period. 10% of the population is FAR from a majority don't ya think?

Yup rockloper...this pretty much says it all.. “Whether you like it or not, whether you agree with that opinion or not, it is the law, plain and simple,” he said. “Sheriffs, as law enforcement officials, can’t pick and choose what laws they want to enforce.” A bunch of guys getting together and thinking THEY get to interpret the Constitution, and the rest of us, including law enforcement and the courts have to abide by it... Crazy...