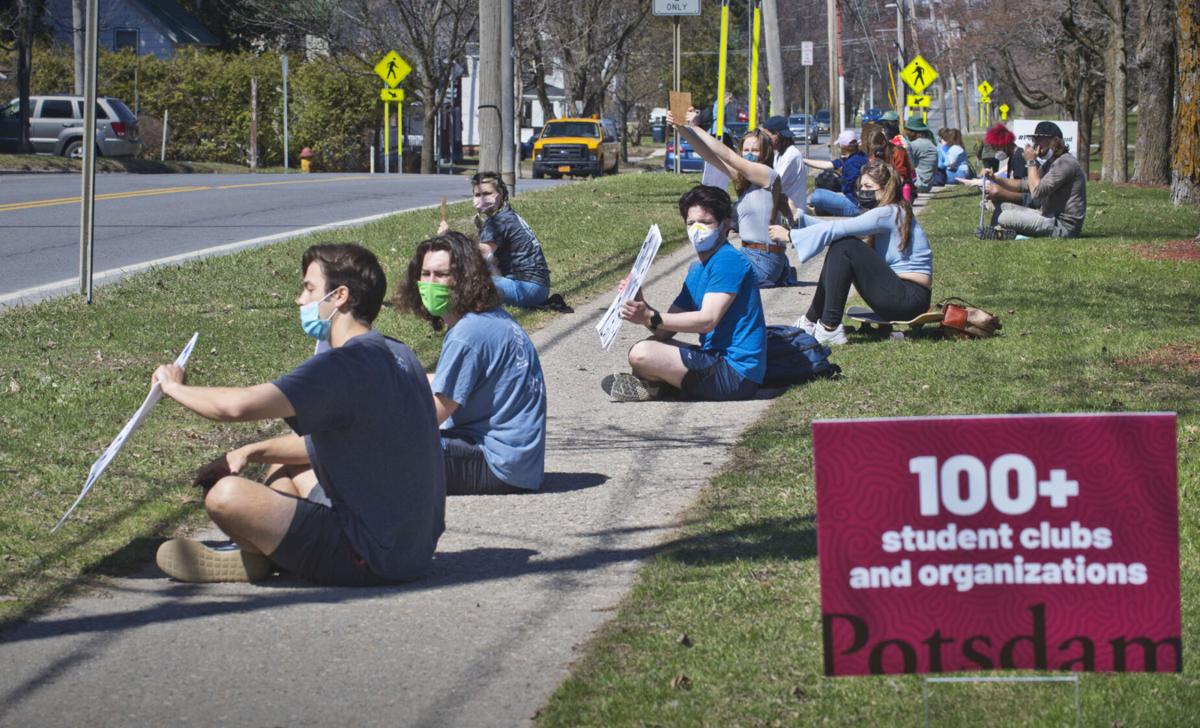 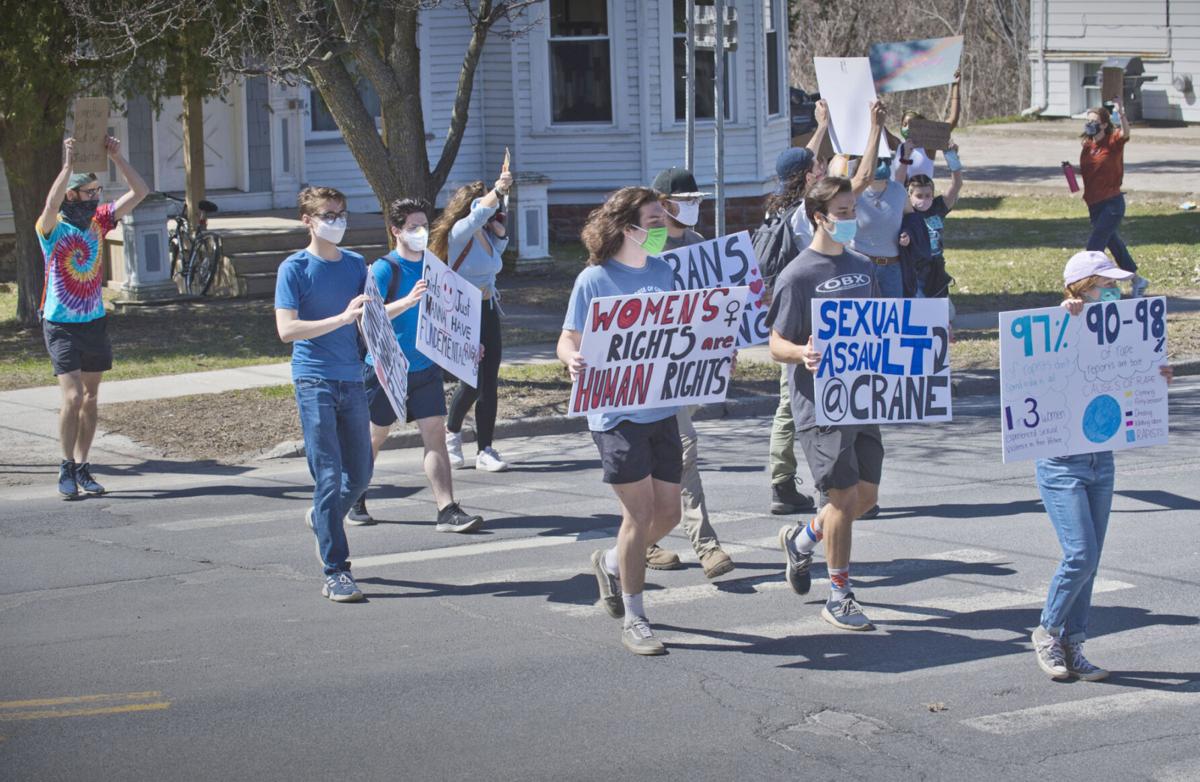 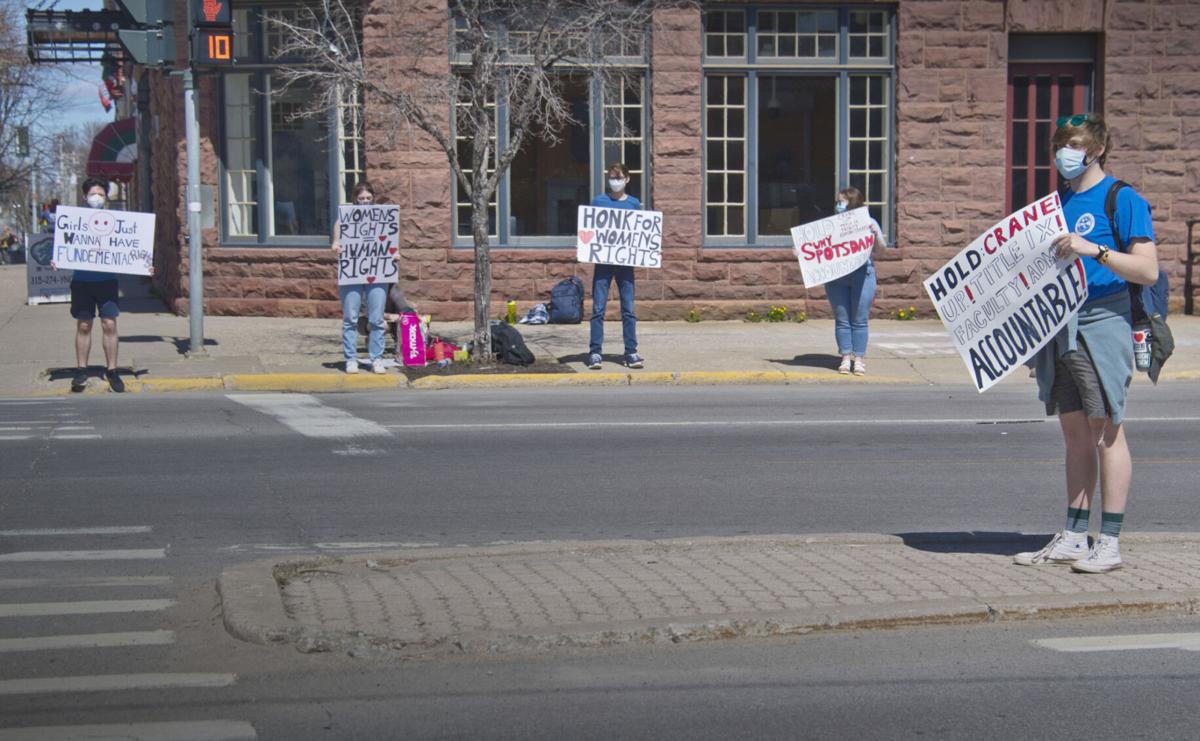 Demonstrators gather at the intersection of Main and Market streets in Potsdam on Wednesday afternoon. Christopher Lenney/Watertown Daily Times 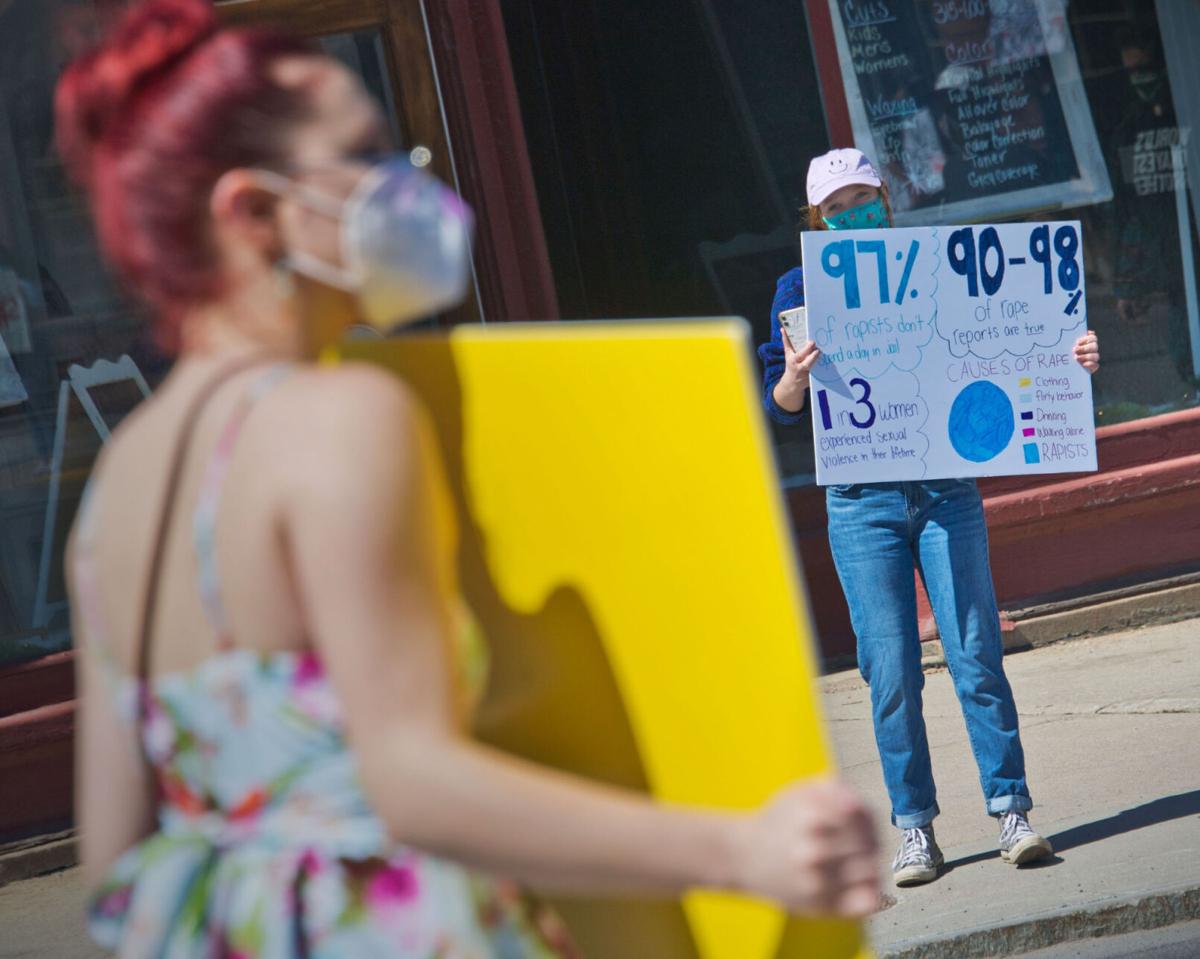 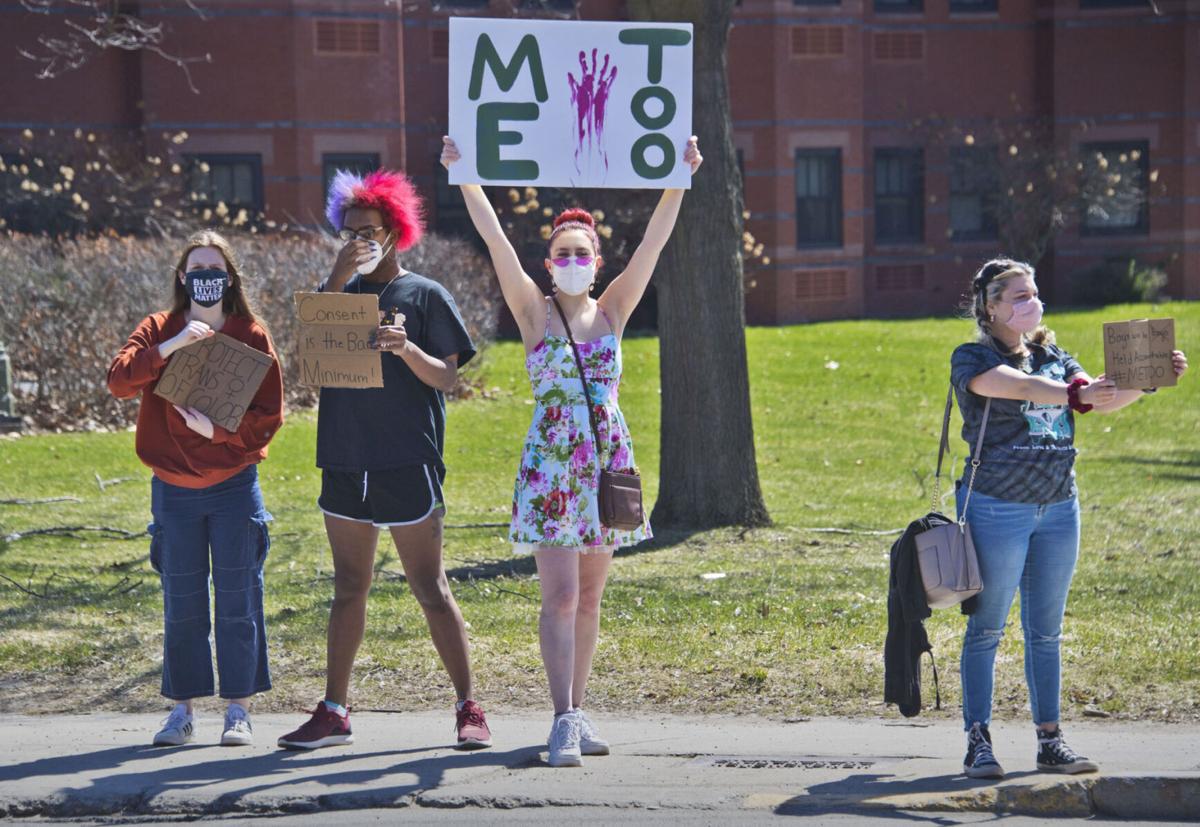 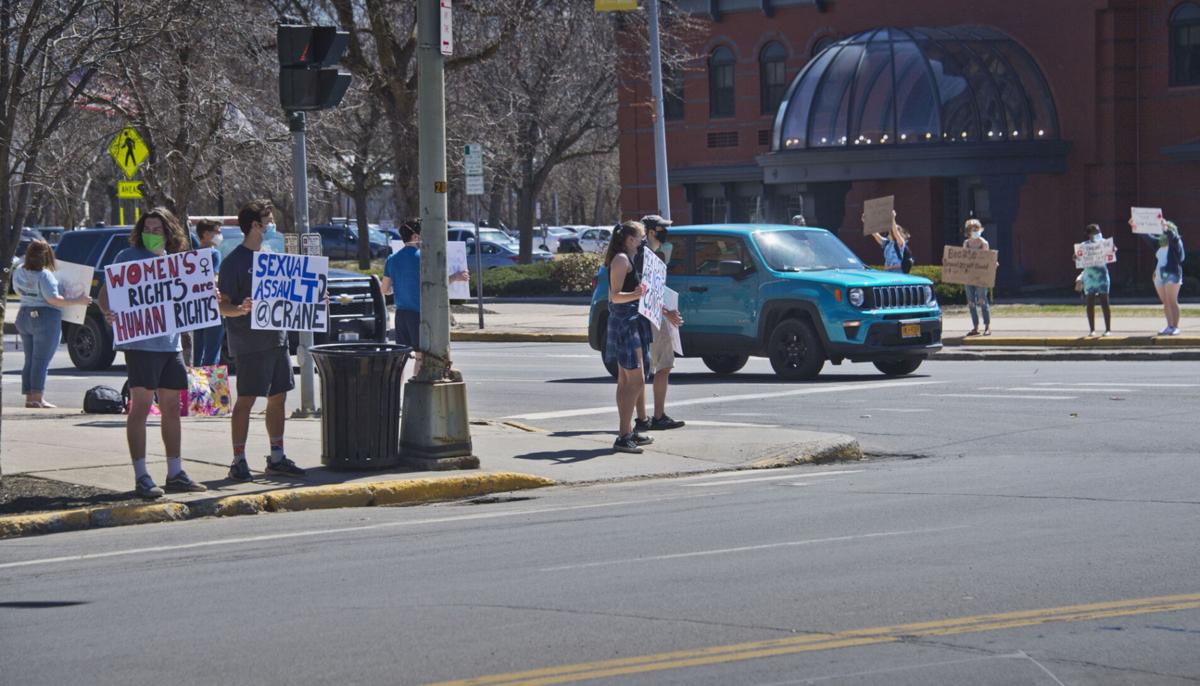 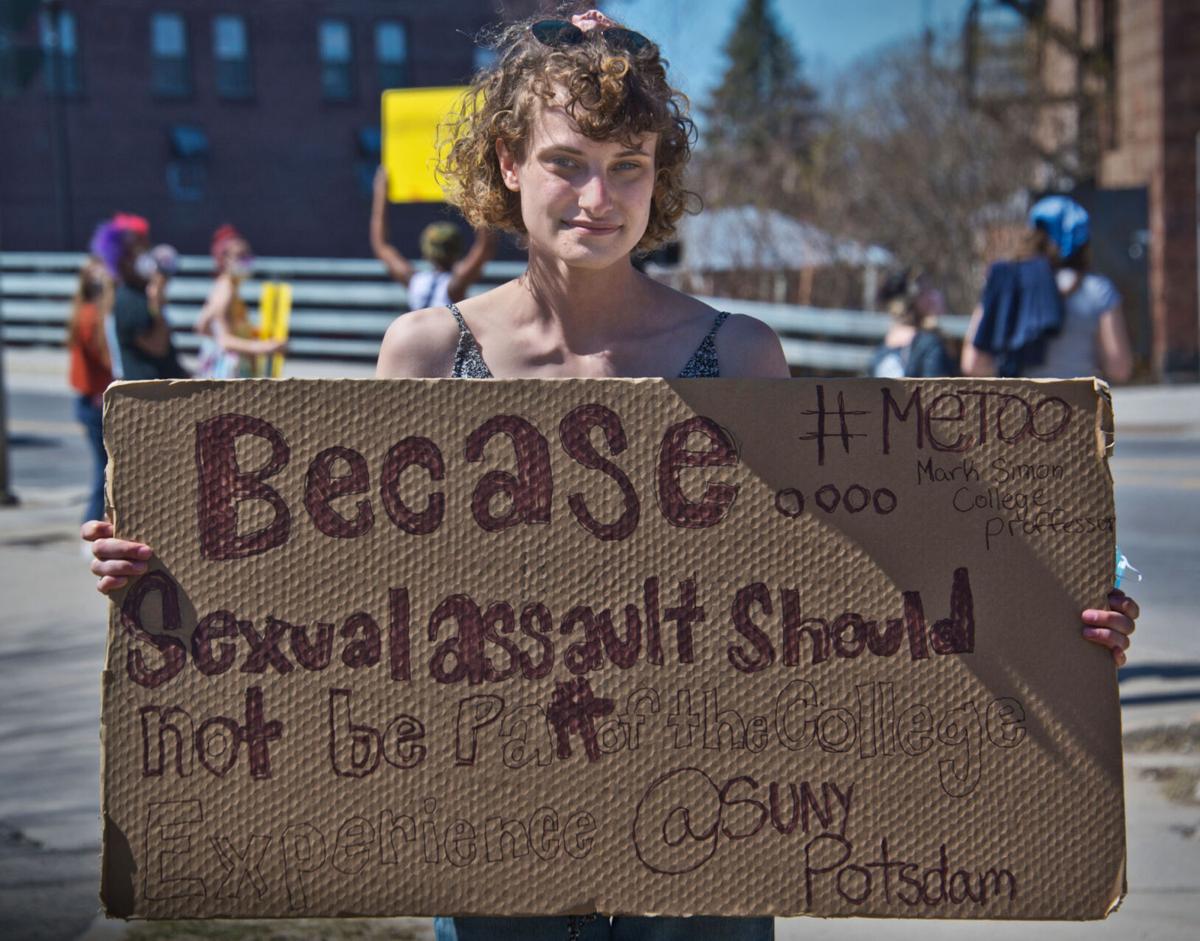 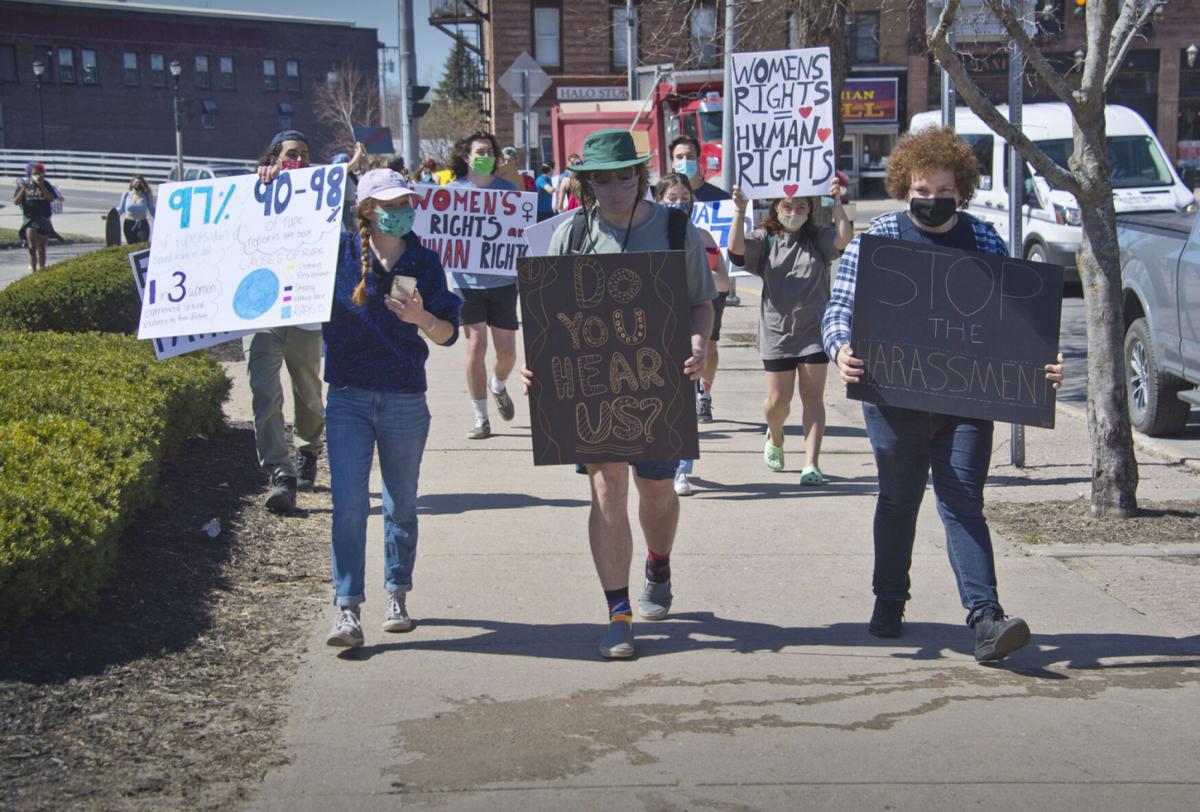 POTSDAM — Cries for justice resonated from the corner of Market and Main streets Wednesday, the bells of village churches tolling noon.

Heading east on Market, then marching toward SUNY Potsdam’s Satterlee Hall, about 30 people rallied against sexual assault. Allegations against SUNY Potsdam faculty members surfaced over the weekend on social media platforms — both Facebook and Instagram — and concerns about the university’s Title IX procedure drew students downtown.

Title IX is a provision of U.S. civil rights law and the Education Amendments of 1972. It prohibits sex-based exclusion or discrimination in any education setting that receives federal financial support.

SUNY Potsdam, like all other federally funded higher education institutions and K-12 schools in the country, is required to have established grievance procedures related to sex-based exclusion and discrimination.

Title IX, and its associated procedural elements, were last updated in 2020, with the updated provision taking effect in August.

Participants said they felt unheard, unseen and unsupported by the university. Sexual assault survivors and their supporters want their concerns to be heeded.

“When we’re out here, everyone who drives by is forced to look at us, and is forced to think about situations like this,” sophomore Jaiden Widdall said, standing at the intersection adjacent to Ives Park and the Raquette River.

Due to COVID-19 precautions, local activist Cassidy Kearney-Danboise hosted the protest in place of a planned larger sit-in. Students joined him, ending the afternoon in silence on the sidewalk along Pierrepont Avenue at the edge of campus. A virtual forum was simultaneously held.

With music education major Elira Mavraj, Jaiden has been organizing with students, faculty and administrators this week. They are seeking a path for acknowledgement, support and procedural change — ultimately, justice.

“I understand there may be things going on behind the scenes, but there’s not enough done that students can actually see and feel,” Elira said Wednesday morning. “A lot of us are tired and fed up.”

From meetings earlier this week and Wednesday’s virtual forum, she added, some preliminary goals have been developed. They include: increasing counseling center staff and capacity, establishing prevention activities focused on perpetrators, not survivors; circulating shorter and more frequent anonymous surveys; and expecting faculty to acknowledge campus sexual assault.

In a statement posted to the university’s website Wednesday afternoon, President Kristin G. Esterberg pledged to launch “an immediate and thorough investigation of all past reported incidents of sexual harassment and assault.”

“This investigation is needed to ensure that every incident reported to the campus was thoroughly reviewed, investigated and if warranted, referred to local law enforcement authorities for further action,” she wrote.

In the coming days and weeks, additional forums are expected to be held.

Two first-year students stood together outside the Clarkson Inn with protest signs in hand and masks on, “disgusted” their school, a place of growth and safety, would house such shame.

“That would be a start — for people to acknowledge what’s happening,” Jamiah Nash said. “You can’t change anything if you don’t admit it’s happening.”

Pray we never have to go to war(WW3) because the country is filled with cupcakes!!