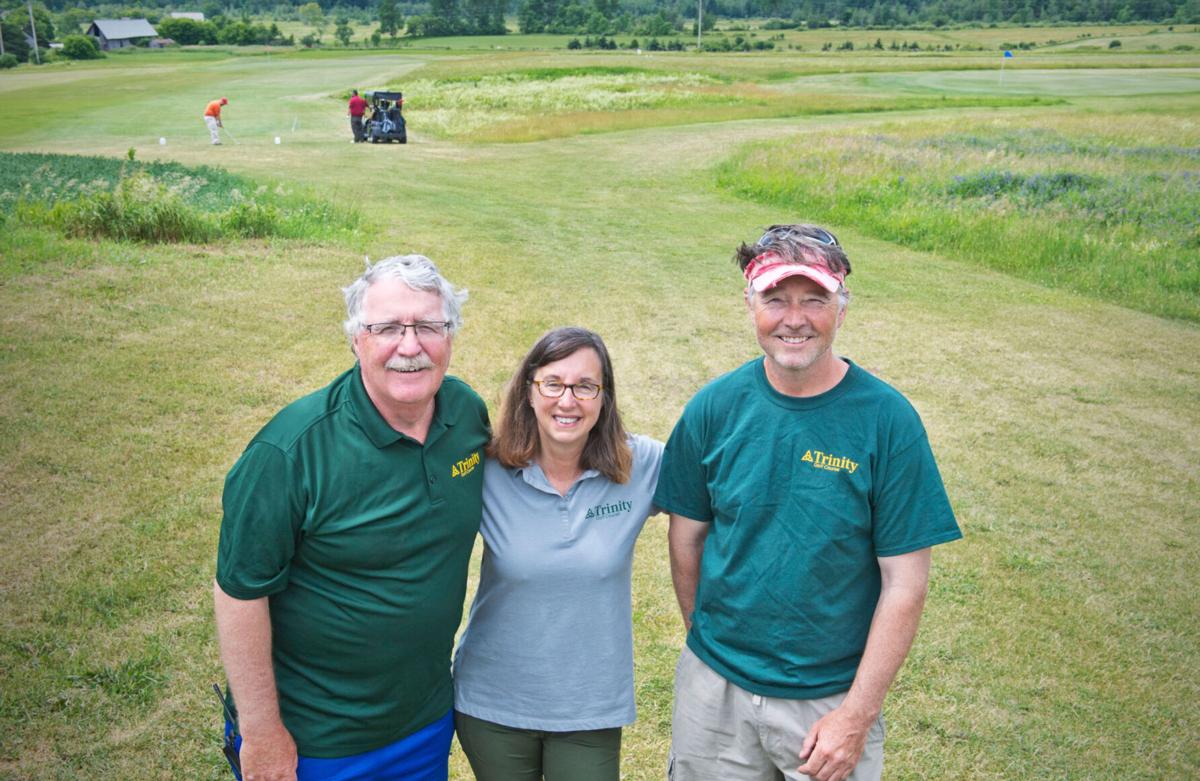 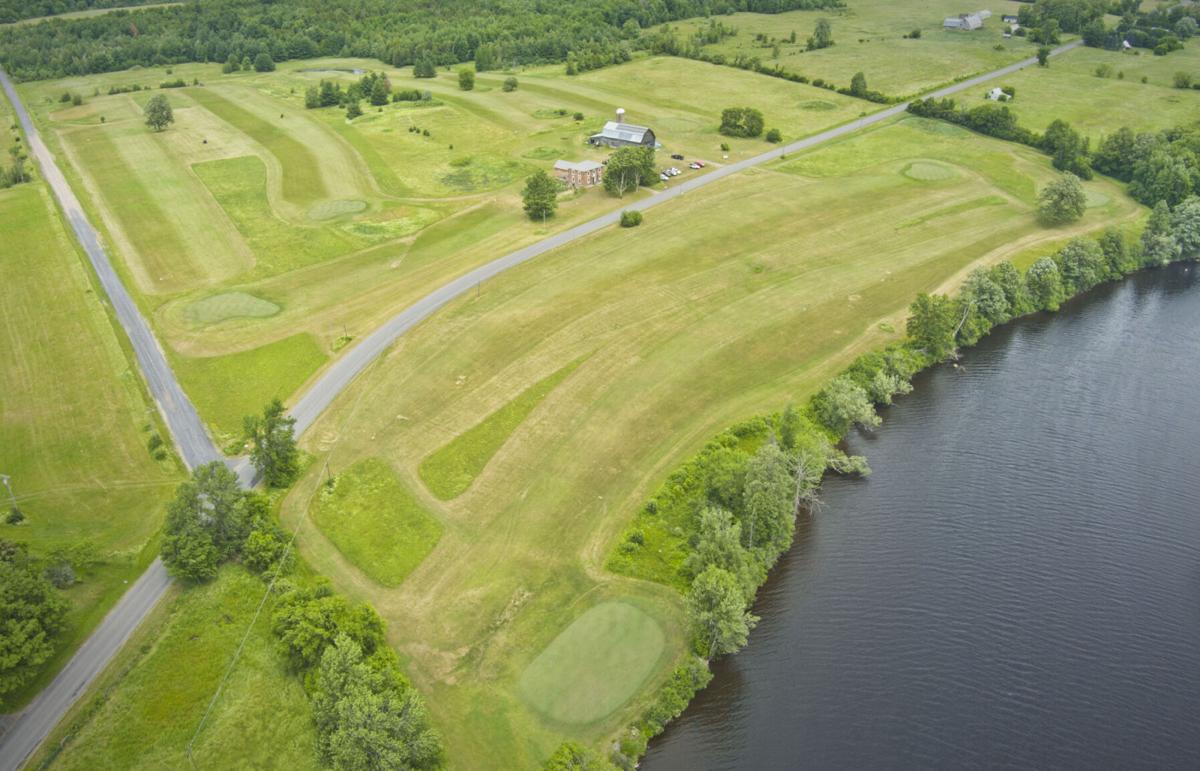 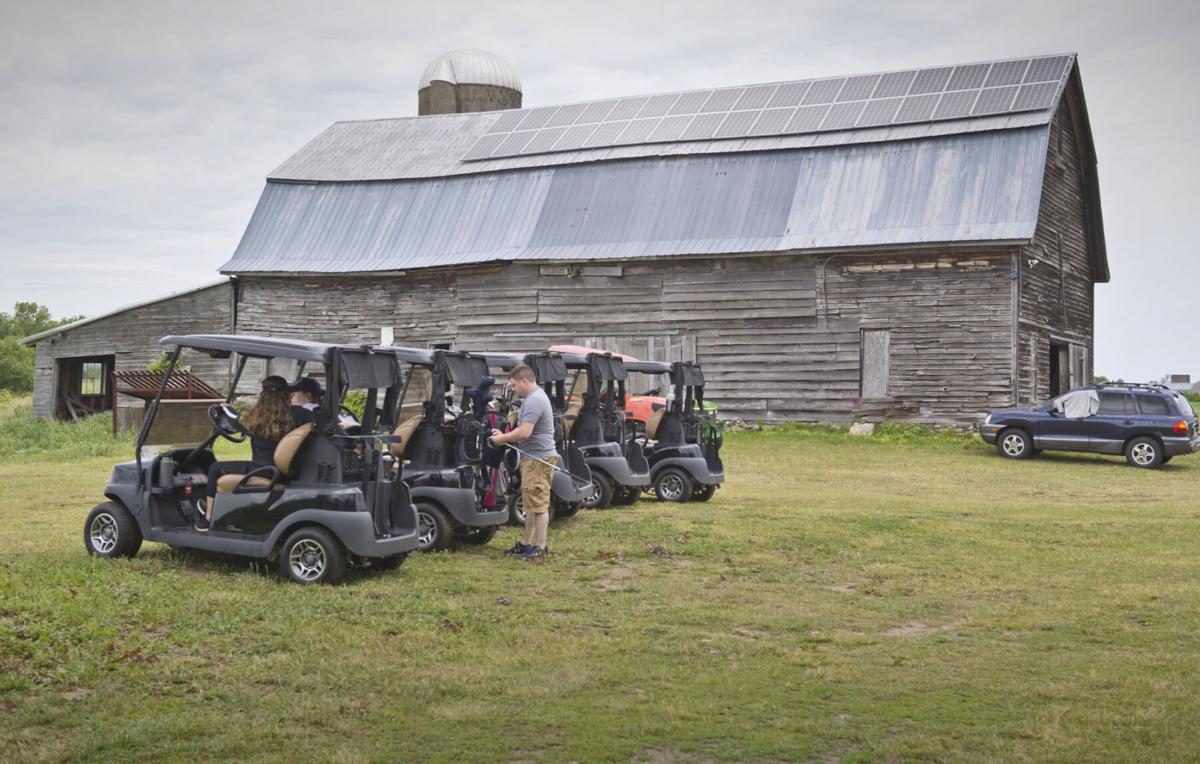 Golfers load their clubs onto electric carts before heading out for a round at Trinity Golf Course in Norfolk. Christopher Lenney/Watertown Daily Times 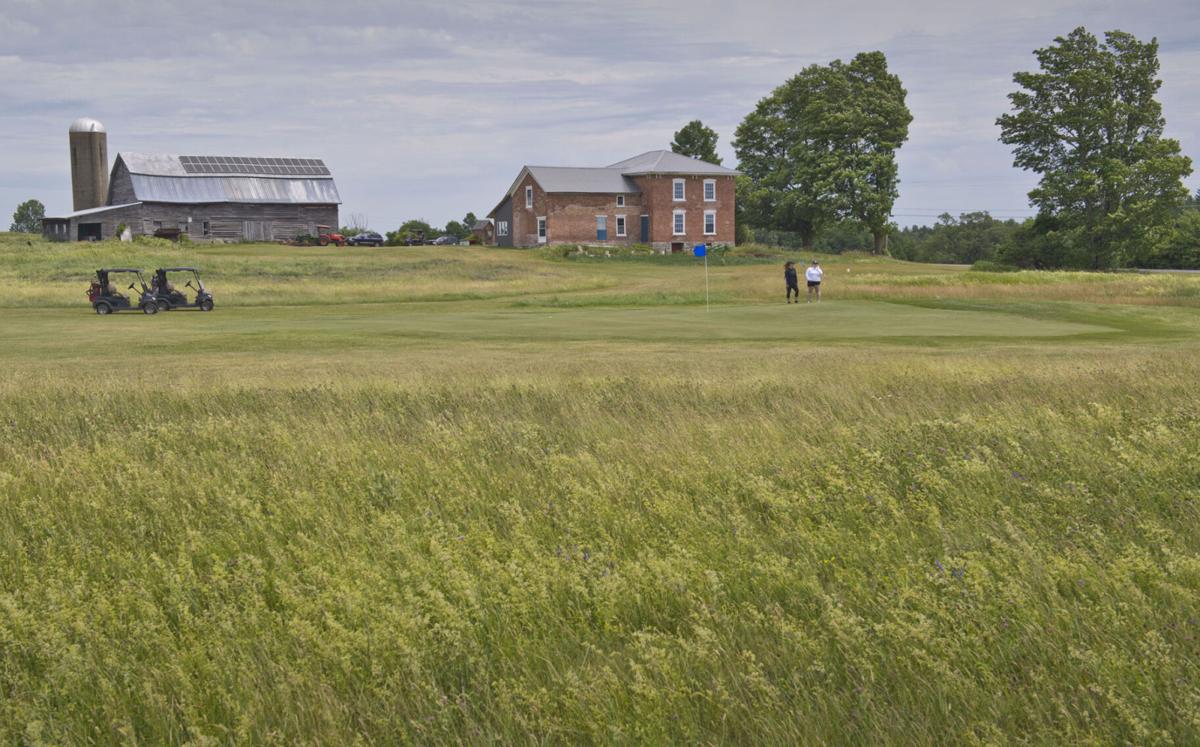 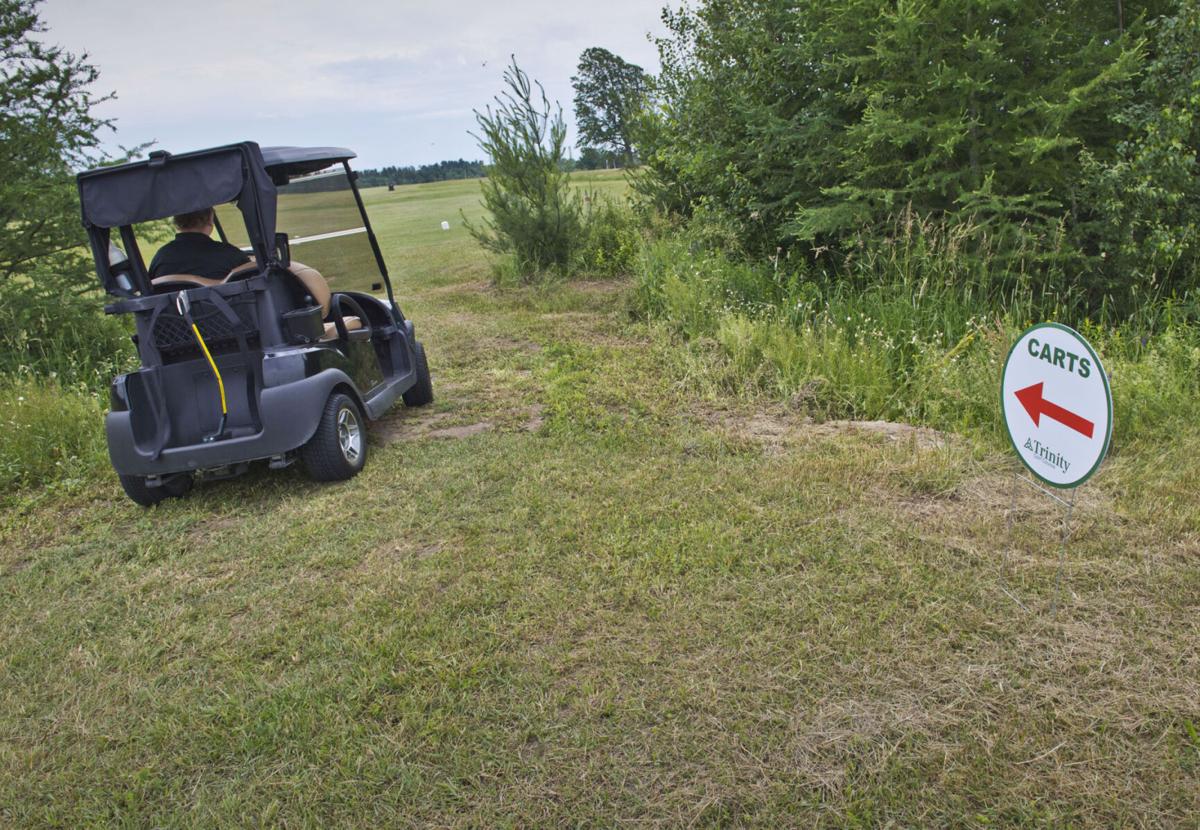 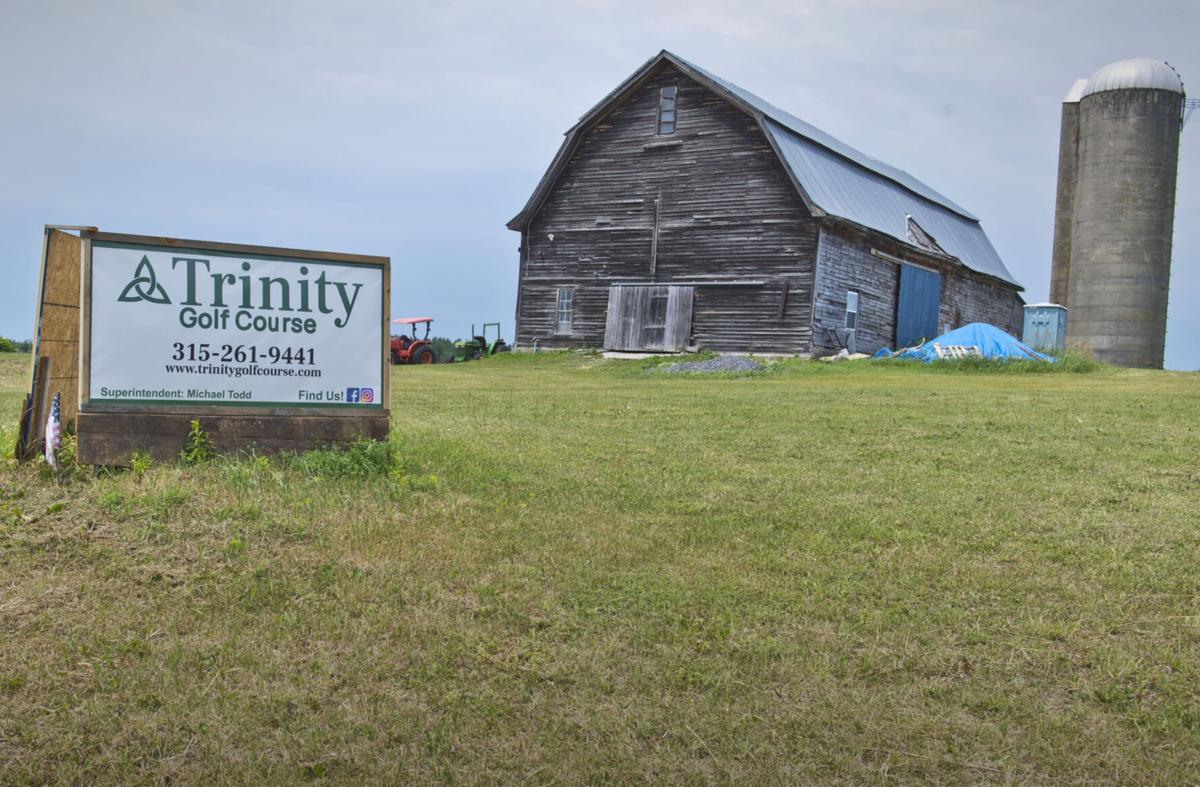 Golfers load their clubs onto electric carts before heading out for a round at Trinity Golf Course in Norfolk. Christopher Lenney/Watertown Daily Times

NORFOLK — As River Road travels out from the village, it climbs a hill and makes a dogleg right. There, above the Raquette River, carved out of an old dairy farm, is the north country’s newest golf course.

Trinity Golf Course opened quietly on May 28. The only hiccup in the opening weekend was the unseasonably cold weather.

“It was freezing,” said Cathy E. Hayes, one of three family members who brought the course to life. “It was a small but faithful crowd.”

The course is built on the old McQuaid dairy, a farm that still boasts a large barn and a farmhouse built in 1865.

Mrs. Hayes, her husband Patrick J. Hayes and Mr. Hayes’s nephew, G. Michael Todd, have been scheming to build the course for more than 20 years.

Mr. and Mrs. Hayes are retired school teachers who met at SUNY Potsdam and taught in Johnson City for many years.

Mr. Todd is a Norwood native who got a degree in golf course operations at SUNY Delhi, and has an impressive resume as a course superintendent, most recently at Liverpool Country Club and Potsdam Country Club.

Mr. Todd, the course architect, when designing the course, tried to work with the existing shape of the land.

“We moved a lot of dirt, but we intentionally and unintentionally tried to make it look like we didn’t move a lot,” he said.

Hole 8, which stretches along the Raquette River, is the best-looking hole on the course in Mr. Hayes’s estimation.

From the back tees, the course is a little more than 2,600 yards. The course is a par 34, with one par five, four par fours and three par threes. There are two tees on each hole, with plans for a third.

The course is advertised as a links style course, which Mr. Todd explained means it is wide open. There are two large oak trees that come into play on the nine-hole course, but otherwise the hazards are mainly swaths of high grass, the rolling terrain and the wind.

“The tricky part here is the wind. When there is no wind it’s kind of nice and enjoyable,” Mr. Todd said. “When the wind is blowing it’s a lot more difficult.”

The course has been gradually getting more play, Mr. Hayes said, particularly since some electric golf carts were delivered.

Word has spread mainly through word of mouth and social media.

Several years have been put into the construction of the course, and this year’s opening was contingent on the greens being able to stay healthy through the changing weather.

With the focus being on course construction, the rest of the operation is a little makeshift. Mrs. Hayes greets golfers on the porch of the farmhouse and runs credit cards on her cell phone. The pro shop for now is a banquet table on the porch.

There are plans to renovate the farmhouse to accommodate a pro shop and hopes of adding a driving range and practice green.

For now though, it is mainly about the golf.

The simplicity is intentional and part of the course’s name. Trinity, Mrs. Hayes said, refers not just to the three people making the course happen but to the three elements needed to play — a ball, a club and the land.

While the course doesn’t have any tournaments or leagues playing, the owners are open to discuss those possibilities with golfers.

Visit trinitygolfcourse.com for information on bookings and tee times. The course is open seven days per week.