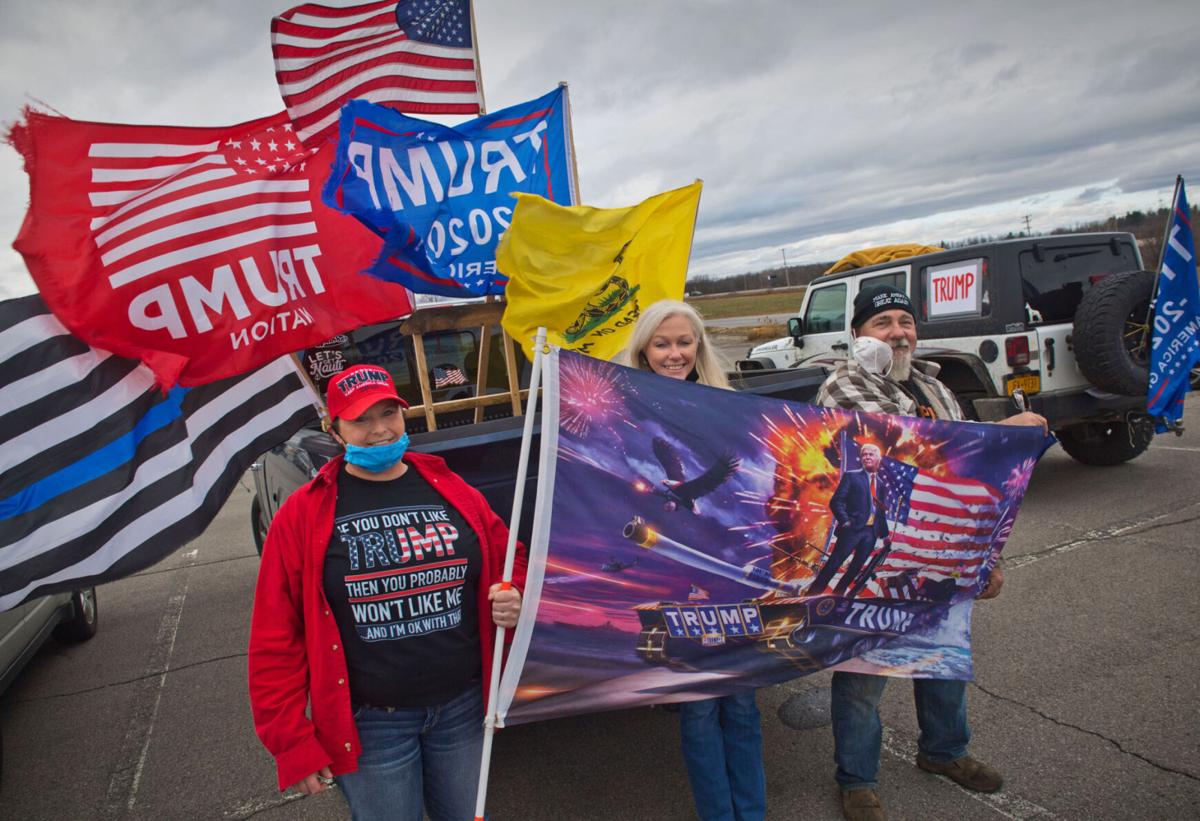 From left, Diane Russell, Karie Doelger and Bob Giordano pose with Trump flags before leaving St. Lawrence Centre in Massena for a round-trip parade of support for the president that went to Ogdensburg, Morristown, Gouverneur, Canton and Potsdam. Christopher Lenney/Watertown Daily Times 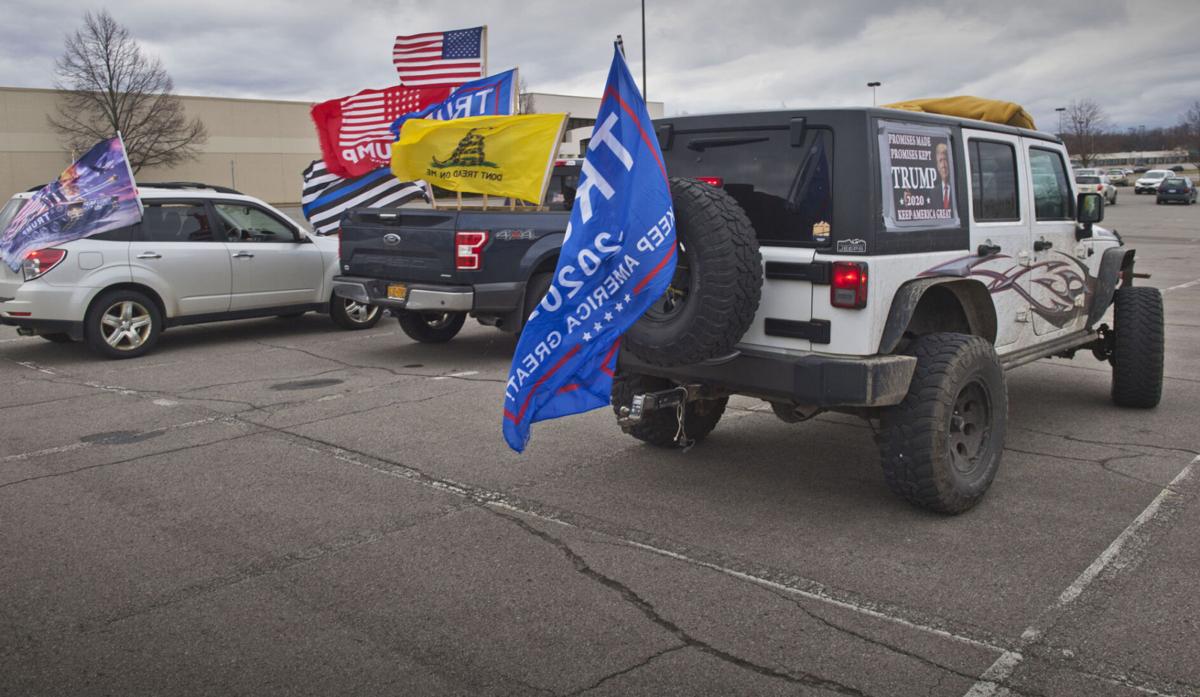 From left, Diane Russell, Karie Doelger and Bob Giordano pose with Trump flags before leaving St. Lawrence Centre in Massena for a round-trip parade of support for the president that went to Ogdensburg, Morristown, Gouverneur, Canton and Potsdam. Christopher Lenney/Watertown Daily Times

MASSENA — A convoy of vehicles with flags billowing in the wind and posters showing their support for President Donald J. Trump traveled throughout St. Lawrence County on Saturday.

The North Country Americans 4 Trump and Law & Order Vehicle Parade left from the St. Lawrence Centre mall in Massena, traveling to Ogdensburg, Morristown, Gouverneur, Canton, Potsdam and back to Massena. Participants didn’t need to start at the mall, and they didn’t need to travel the entire route.

“They can start out any time along the route,” said organizer Karie Doelger, who said she was committed to traveling the entire loop around the county.

She said she used Google Maps to create a timeline of their anticipated arrival in each town and village, allowing “the Trump Train” to pick up more participants along the way.

She said the event was meant as a peaceful showing of support for President Trump, who is challenging the results of this year’s election against Joe Biden.

“We do have a Constitution for things like this,” she said.

It was also an opportunity for individuals to safely get together while adhering to restrictions imposed by COVID-19.

“I had people asking me about wanting to do it. People know how much I love and support President Trump, America and the Constitution. We need to stand up for America and what’s right. We just need to stand up for the Constitution. It’s what our country is founded on,” she said. “This parade is meant to bring people together in a safe and peaceful way. This is meant to be a pleasant afternoon drive to celebrate America, President Trump and our heroes.”

She created an event for Facebook’s event page and welcomed anyone who wanted to participate. Participants were asked to decorate their vehicles in a show of support for the president, America, law enforcement officers, first responders and members of the military.

“We did it Sunday before the election,” she said.

She said that event drew between 20 and 40 participants.

“It shows we still support our country,” Ms. Doelger said.

Good for them and no burning, looting, assaulting, etc. Anyone with functioning grey matter knows that this election was a fraud! The question remains, are people going to just throw their hands in the air and say oh well or is this the line in the sand that patriots are drawing and saying no more it’s time to take a stand for freedom and liberty! Stay tuned it going to be ‘Biblical’ on Friday!

imagine being so far down the rabbit hole that you think there was fraud in the election. trump has been getting laughed out of court at every turn.

you're right that the caravaners deserve praise for keeping it peaceful, quite different from the million maga marchers in dc last weekend.

Keep ignoring replies to your fraud claims asking for evidence Holmes....keep ignoring 30+ court cases tossed by judges in various states...keep ignoring demanded hand counts that match election results.. Even ignore fellow GOPer's.. Christie "Quite frankly, the conduct of the president's legal team has been a national embarrassment," [Fox News host] Tucker Carlson even concluded the other night — that if you're unwilling to come forward and present the evidence, it must mean the evidence doesn't exist." You obviously know something the rest of the world doesn't .... yet wont share it...as Tucker says "the evidence doesn't exist"... Support Trump parade and their right to peaceful demonstration...

In two years when the Republicans take the house they can begin impeachment proceedings. Up until that time they must resist all efforts by whatever means necessary the administration's goal to fundamentally change America. The new Democrat concept "Unity" against that change is critical to our existence as prosperous and free people. Without prosperity there is no freedom. The Republican controlled Senate must begin investigations & hearings. That along with Intelligence and DOJ investigations into the president's connection to China & Ukraine. The IRS must also investigate potential money laundering and tax evasion. There is so much to do in the next four years. This battle ends, the war continues.

impeachment for what? there have already been investigations, led by republicans, into claims against biden and he came out completely clean. here you see the illiberal republican base salivating over the prospect of abusing investigatory powers for partisan ends. trump was impeached over genuine misconduct he did on the job (and for which he should have been convicted).

Hey..there're a LOT of Trump flags....MAGA hats..banners.... a chance to use them before they're packed up or sent to a landfill, or yard sale... maybe hang til 2024... AND don't think the chaos with no evidence created by this election isn't going to repeat itself ...

Just wondering what you’re going to do with your Taxin Tedra yard sign?