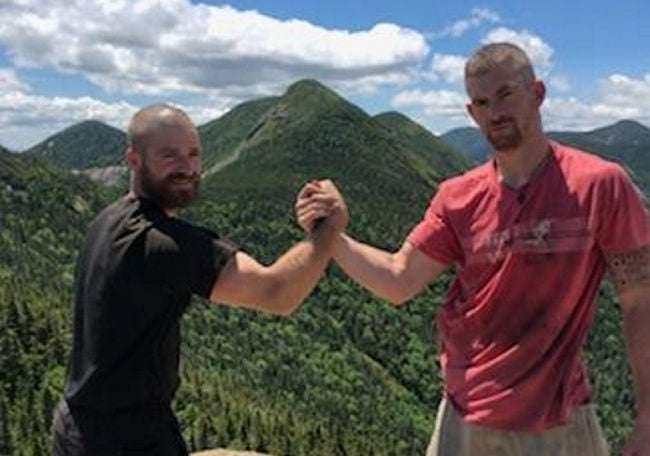 MIKE KING/CONTRIBUTED Michael R. Jock, left, and Lukas B. Wear clasp hands on the top of Armstrong Mountain with Gothics rising in the background. The pair recently set the record for the fastest unsupported through-hike of the 46 High Peaks of the Adirondack Mountains. They completed the trek in 6 days, 23 hours, and 45 minutes. 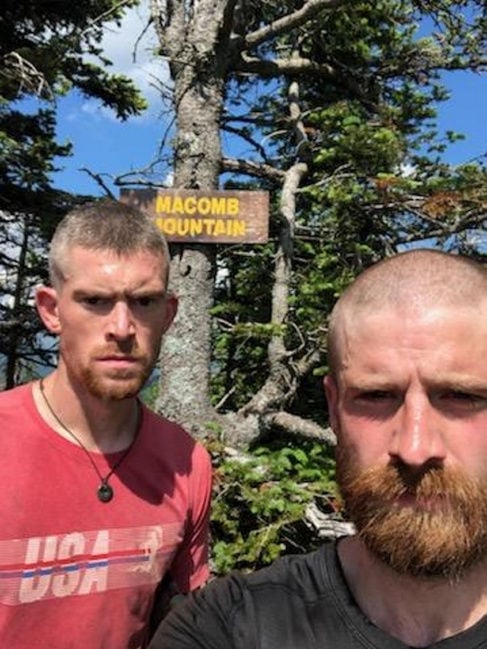 CONTRIBUTEDLukas B. Wear, left, and Michael R. Jock on the top of McComb Mountain during their record breaking through-hike. Despite their grim look, Mr. Jock said morale was good during the attempt. 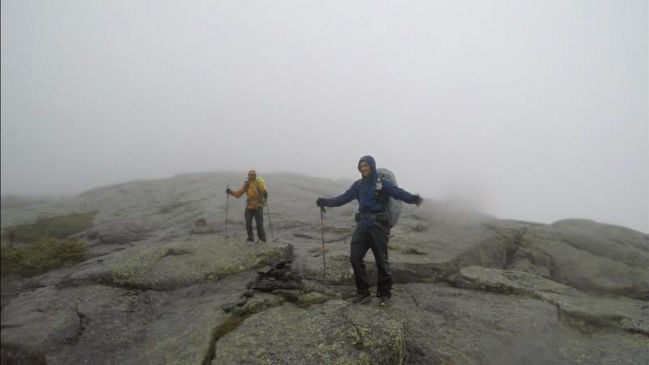 CONTRIBUTEDMichael R. Jock and Lukas B. Wear battled extreme heat, biting insects and torrential rain in their successful attempt to beat the record for the fastest unsupported through-hike of the 46 High Peaks of the Adirondack Mountains.

MIKE KING/CONTRIBUTED Michael R. Jock, left, and Lukas B. Wear clasp hands on the top of Armstrong Mountain with Gothics rising in the background. The pair recently set the record for the fastest unsupported through-hike of the 46 High Peaks of the Adirondack Mountains. They completed the trek in 6 days, 23 hours, and 45 minutes.

CONTRIBUTEDLukas B. Wear, left, and Michael R. Jock on the top of McComb Mountain during their record breaking through-hike. Despite their grim look, Mr. Jock said morale was good during the attempt.

CONTRIBUTEDMichael R. Jock and Lukas B. Wear battled extreme heat, biting insects and torrential rain in their successful attempt to beat the record for the fastest unsupported through-hike of the 46 High Peaks of the Adirondack Mountains.

PLATTSBURGH — There is a new standard for climbing the 46 High Peaks of the Adirondacks.

Two SUNY Cortland graduates, Michael R. Jock, 30, and Lukas B. Wear, 28, who are roommates and independent personal trainers in Manhattan, have completed the fastest known unsupported through-hike of the 46 High Peaks of the Adirondacks.

On July 4, the pair summited their 46th peak, Mount Esther, on the northern shoulder of Whiteface, 6 days, 23 hours and 45 minutes after starting their trek at the trail head to Seward Mountain in southern Franklin County.

The previous fastest known time was 7 days, 14 hours and 15 minutes.

On their last day of hiking, they climbed six peaks, covered 44.18 miles and were moving for 23 hours and 30 minutes.

Mr. Jock got the idea to attempt the through-hike record two years ago while talking with a friend after an outdoors outing near his parents’ home in Altona.

Mr. Jock is familiar with endurance sports. He had just completed the Marathon De Sables, a series of back-to-back marathon-length races across the Sahara Desert in Morocco.

“This sounds like something pretty similar,” he said. “Going out for several days and cranking out big distances. I was super down. I had this big void and needed to find the next thing.”

To qualify as an unsupported attempt, hikers have to carry all their food and equipment. They can receive no outside help. They have to walk every step of the way — there are no car rides between trailheads. While they can leave their bags at the bottom of mountains as they climb, they have to finish on the last peak with all their gear with them. They used filters to drink from local water sources.

This was the team’s third attempt at the record.

On the first two attempts there were four hikers. Injuries, a kidney stone and bear encounters spoiled those two tries in the summer of 2018.

Their record time is listed on fastestknowntime.com, which tracks fastest attempts on hiking trails. The website requires an incredible amount of detail to verify an attempt. They sent photos from the top of every mountain, data from their Garmin satellite watch and a detailed account of each day.

Mr. King was on the first two attempts last year and this year was working on a documentary about the hike.

Mr. Wear grew up in Westchester County and figures he had climbed about 20 High Peaks before they started to consider the through-hike.

“I had a good general sense of where a lot of things were and I took over the duties of navigation and trying to pick out the best route for us,” he said.

Both said they learned a lot by failing on the first two attempts.

“There were four of us,” Mr. Wear said. “We went with the same route but our bags, however, were significantly heavier.”

They were unprepared, Mr. Jock said.

“We did an after-action report,” Mr. Jock said. “There were a lot of issues that were unforeseen and we had to make adjustments and tweaks.”

One of the adjustments was to change their diet. On the first two attempts they brought food to heat up at night before going to bed.

“The preparation time was killing us,” Mr. Jock said. “You just want to get to camp, get to sleep and get off your legs and rest so you can get up and recover.”

This time, it was granola for breakfast and dinner.

“A combination of chews and bars for moving fuel,” Mr. Jock said. “And then at night we looked forward to so much, to coming back to one beef stick and a candy bar which got us through the day. We talked about it all day.”

Mr. Jock said he consumed about 24,000 calories of food over the six days. His Garmin watch said he burned 40,000 calories.

Each lost about 15 pounds during the hike and Mr. Jock suspects he has a stress fracture on his left tibia. Mr. Wear’s arms were covered in scratches due to his heedless style of moving through the woods.

And, they both were covered in bug bites.

Of the 212 miles, they ran for maybe 30 miles, Mr. Wear said. They had planned on running more on the last day, but Mr. Jock’s injury made that impossible.

On top of setting the record, the pair raised $7,000 for the Dubin Breast Center at Mount Sinai Hospital in New York.

The toughest part of the trek may have been the night of day three when they had to descend Algonquin, the second highest mountain in the Adirondacks in a torrential rain storm, then walk in a constant downpour for about 15 hours the next day.

“We had a couple good cries,” Mr. Jock said with a laugh. “Every day had its ups and downs, but for the most part it was good. Morale on the whole was good overall.”

They trained intensely for the five months leading up to the event.

“We had one week where we had two 50-mile races,” Mr. Jock said. “We had a 10-hour endurance run and then six days later a 50-miler in Utah. And then we filled that with long runs and long cross training sessions.”

After a certain point all the training was done while carrying weight, to get used to carrying backpacks.

With all the preparation and training it still came down to a bit of luck.

“A big fear of ours,” Mr. Jock said, “was all the things we can’t control. A lot of stars have to align. Things have to go right. We talked about how scary it was that it could take one misstep out of the hundreds of thousands of steps we took and it could end the trip.”

While they recover and start exploring ideas for their next challenge they plan to spend sometime enjoying the mountains they conquered.

“We are super excited just to get back to the Adirondacks and just hang out,” Mr. Wear said.

“I can’t wait to come up here with a bag full of good food and luxurious equipment and go get one mountain and enjoy the mountains the way we started,” Mr. Jock said.

Michael Jock is the nephew of writer Tom Graser.