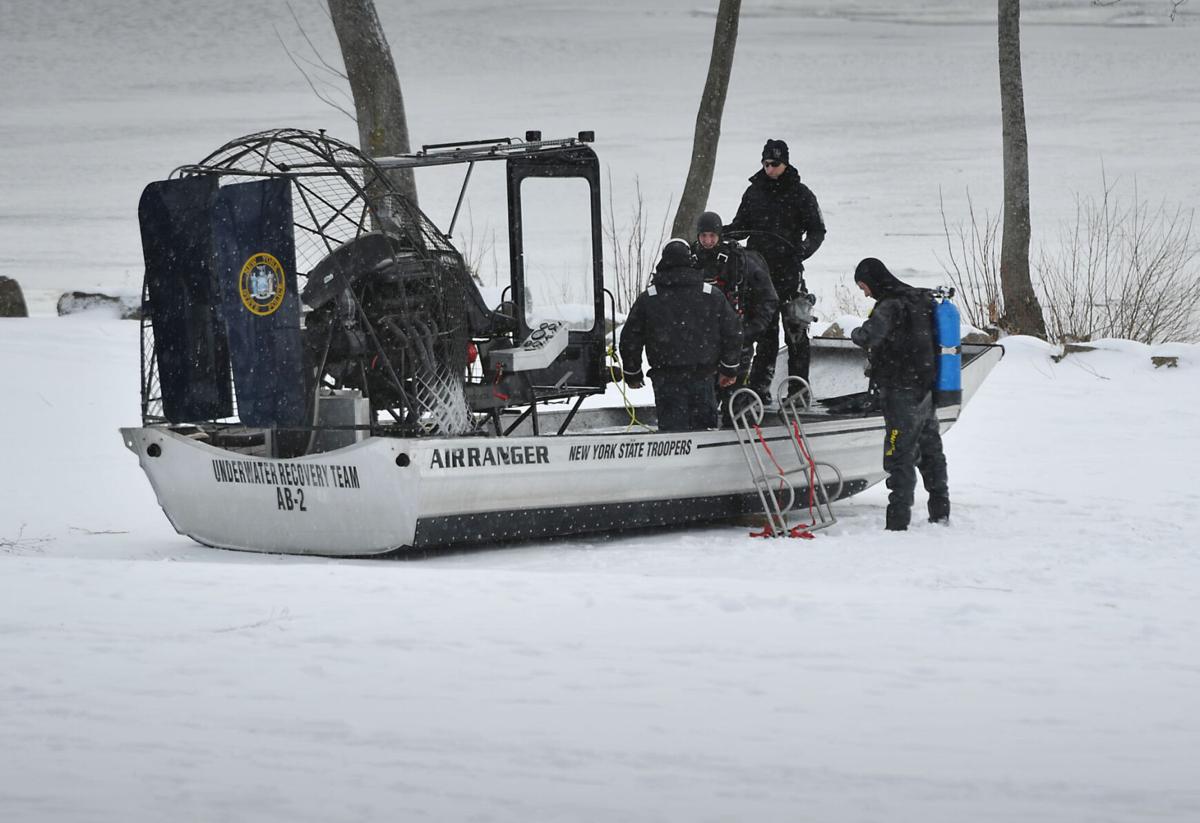 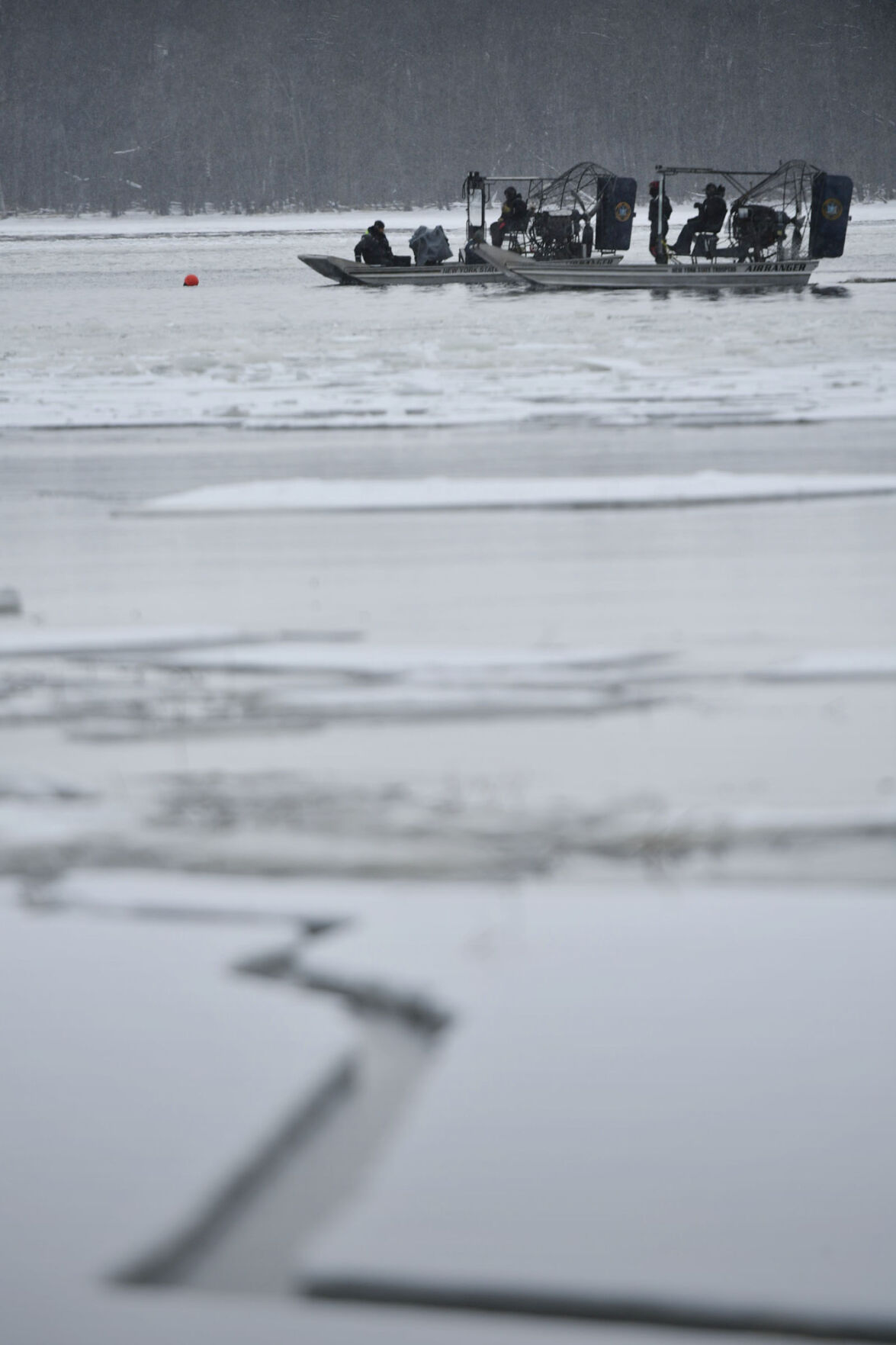 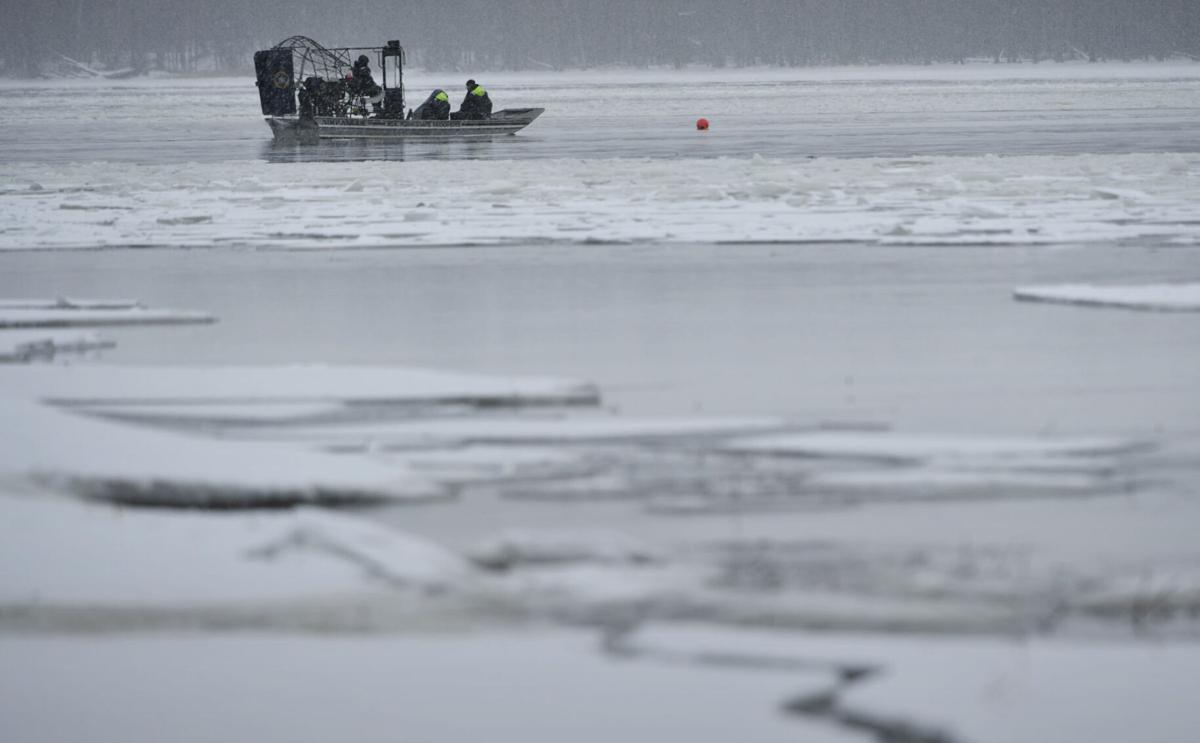 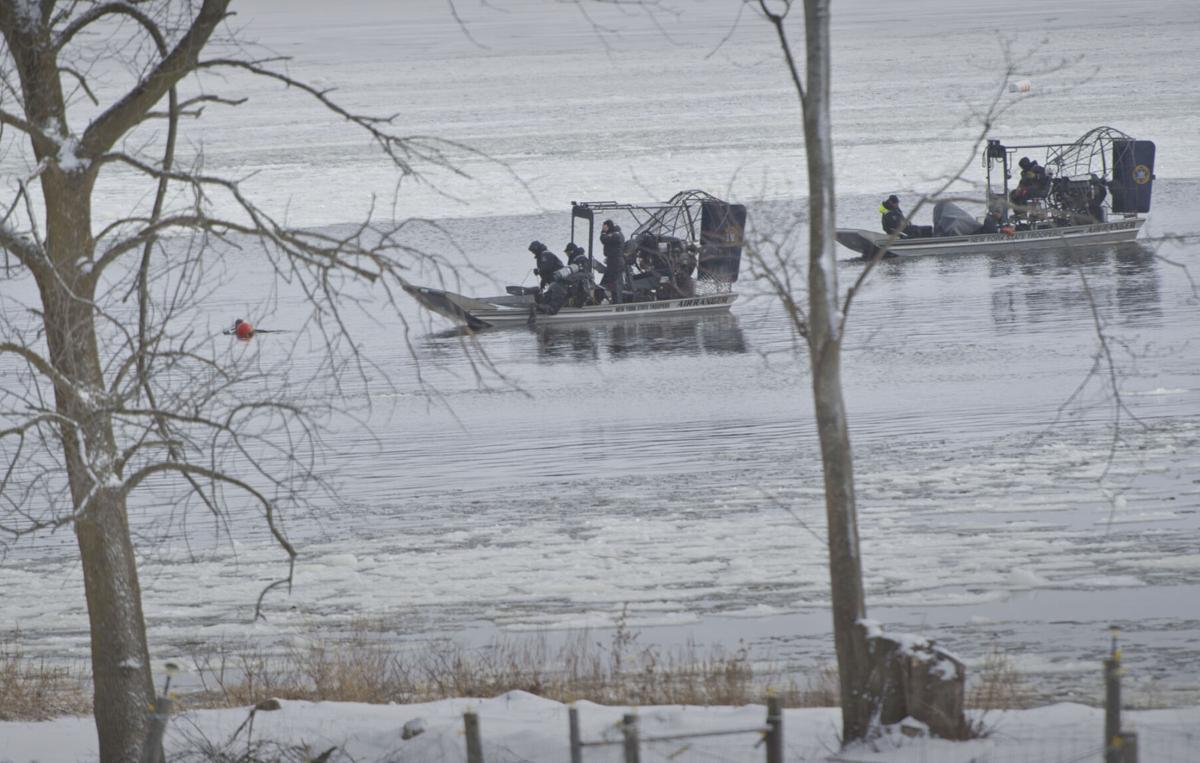 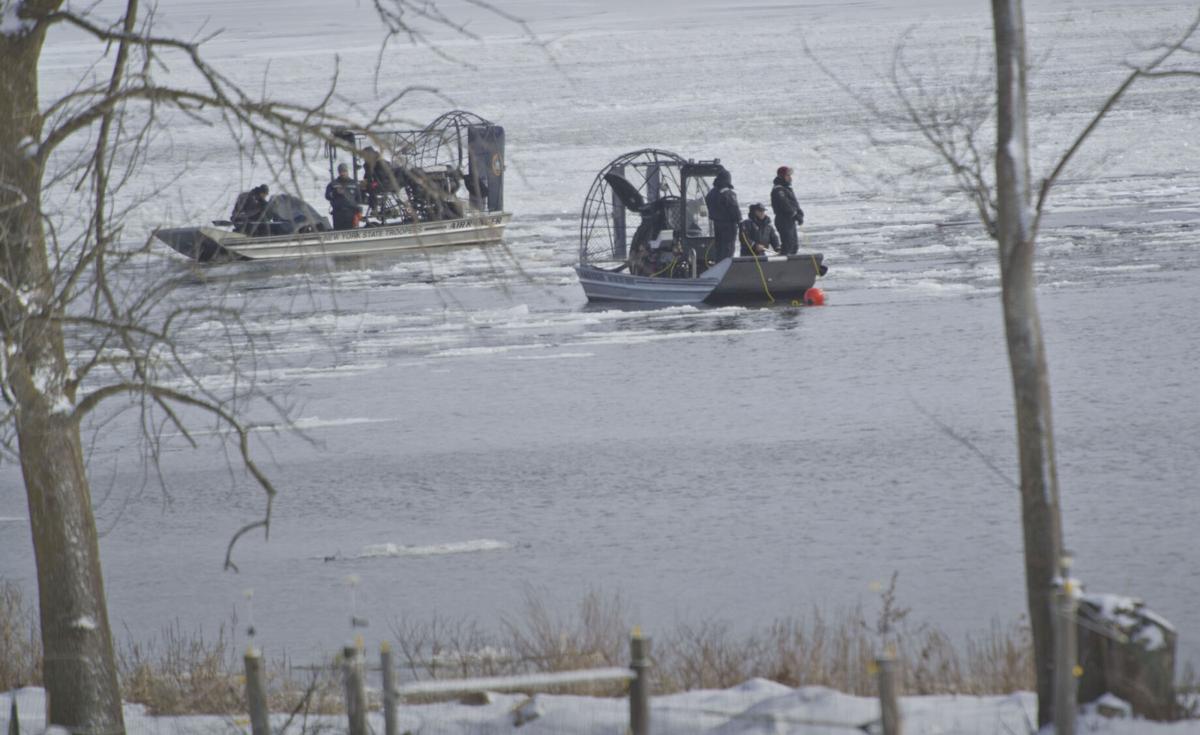 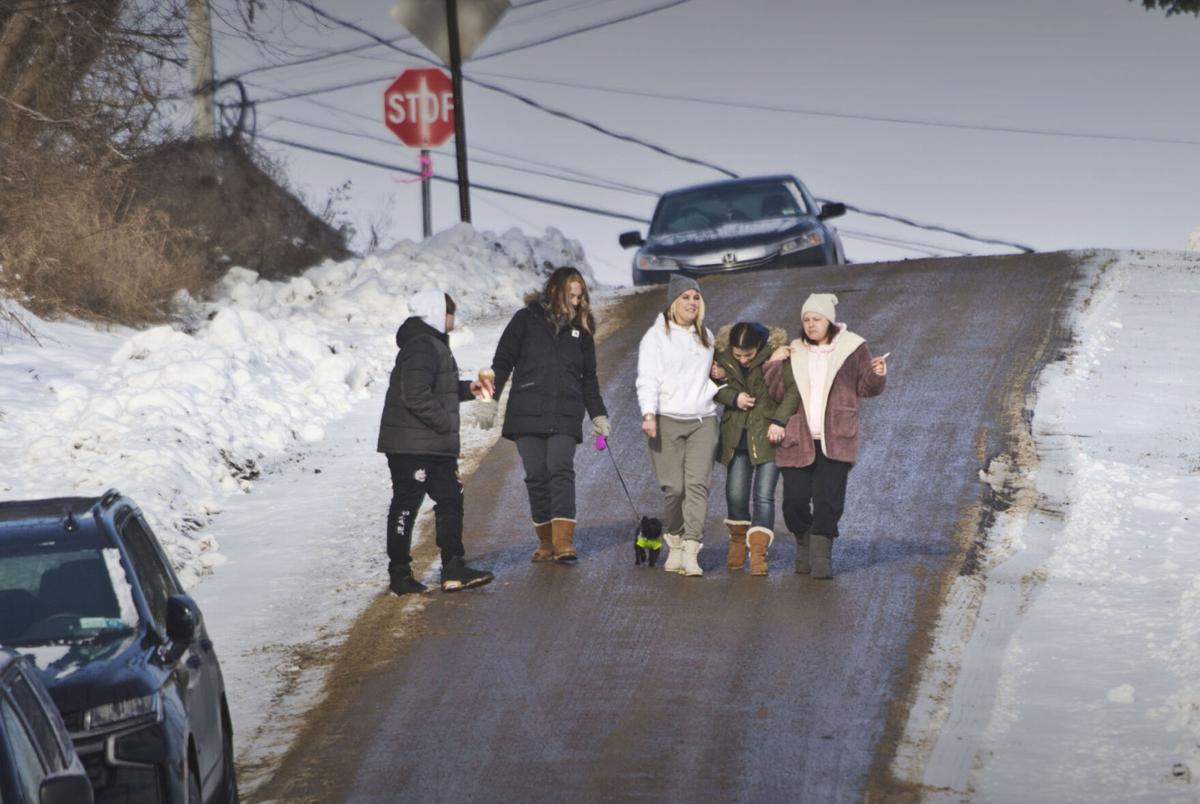 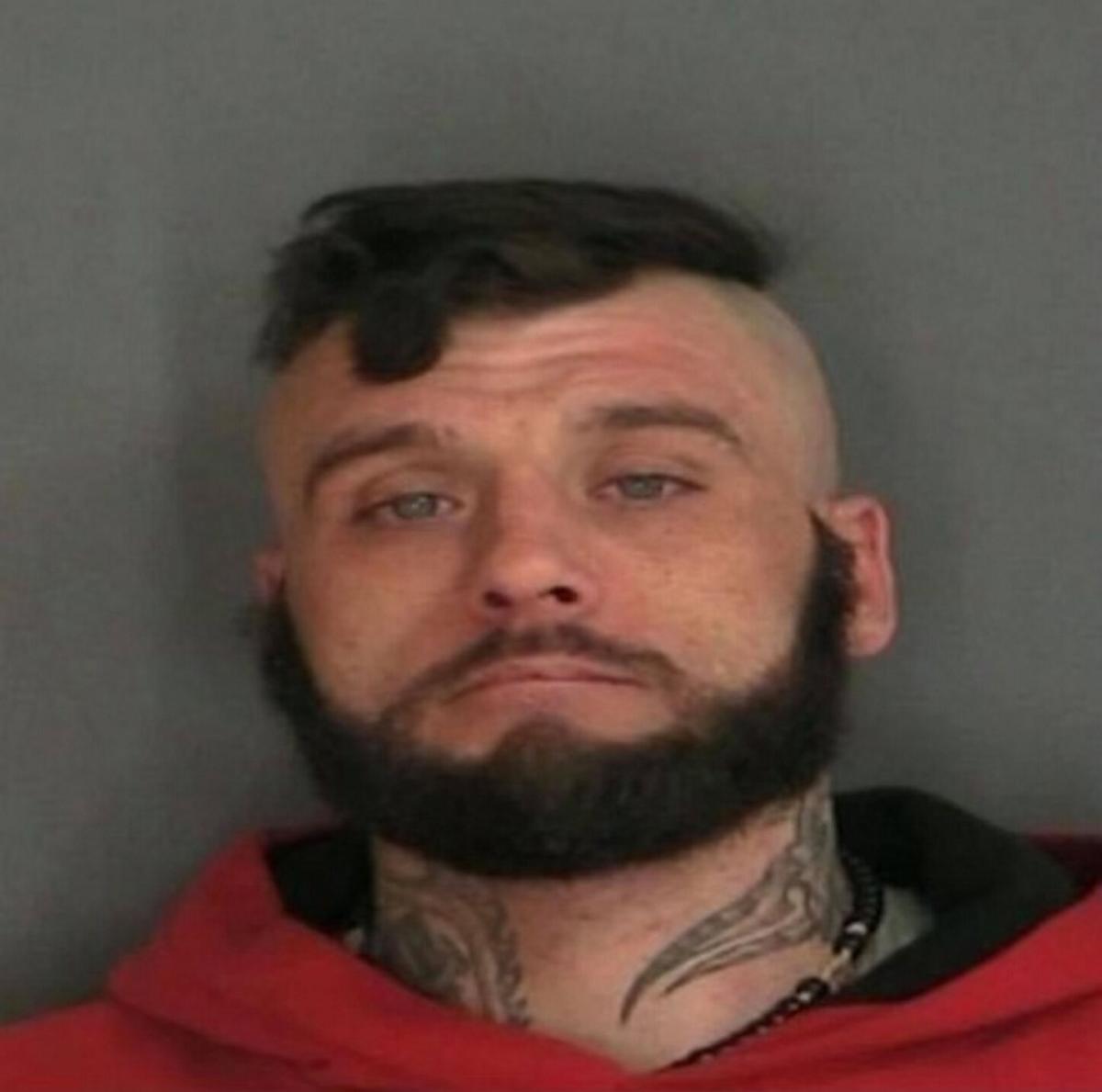 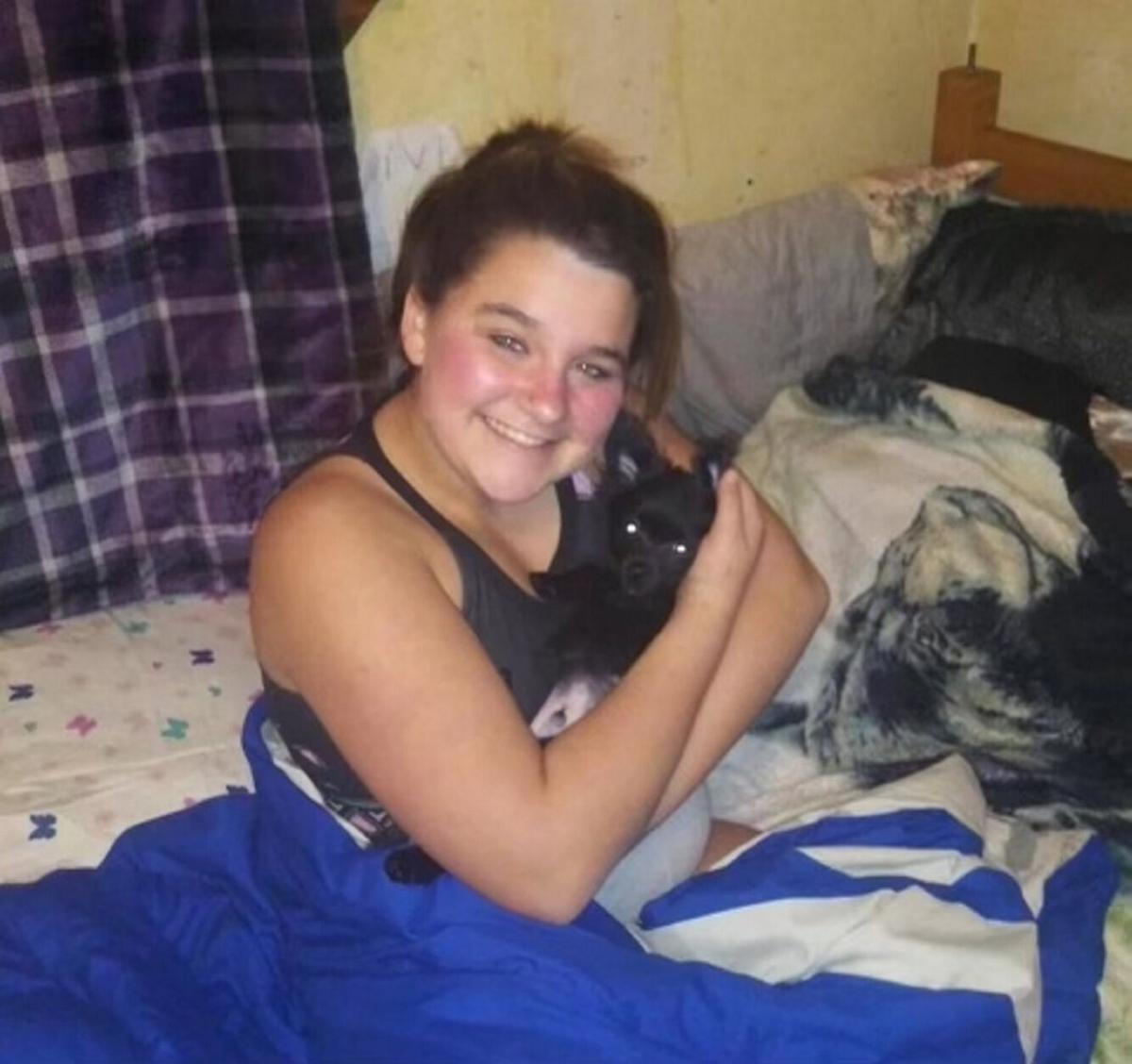 MORRISTOWN — Three days into the search for a missing father and daughter in Black Lake, the multi-agency recovery team has suspended efforts until icy conditions subside.

The body of Larissa Redmond, 13, was recovered from the water Tuesday afternoon, and the search continued Wednesday for her father David R. Redmond Jr., 37, and the snowmobile the pair is believed to have been using when they were last seen Friday night.

The recovery team continued to break up ice and deploy divers off Stone Church Road into Wednesday afternoon, but at about 4:30 p.m., Mr. O’Brien announced the team had “suspended the recovery until conditions improve.” Persisting below-freezing temperatures and ice build up have hindered access to the water.

The search for Mr. Redmond will continue, he said, “when it can be done safely.”

Black Lake’s usual murk, with several feet of weedy growth from the lake floor, is exacerbated by freezing temperatures and sheets of ice extending from the shoreline. The water’s depth in the search area, Mr. O’Brien said, is about 6 to 8 feet deep.

The Ogdensburg-area pair was reported missing Sunday following a Friday night snowmobiling trip. They were last seen in the city area at about 11:30 p.m. Friday, according to the sheriff’s office.

Foul play is not suspected, the undersheriff confirmed Wednesday morning.

The recovery team settled on a search area along the northwestern side of the lake because snowmobile tracks were found leading from the road to the lake’s icy surface, according to the sheriff’s office. Responders inferred the pair — on one snowmobile — may have attempted to ride onto the lake’s surface and fell through.

The sheriff’s office is coordinating with state, tribal and local partners, including fire and rescue squads from Heuvelton, Morristown, Parishville and Brier Hill, on scene this week at an incident command center set up on the lake’s shore between Stone Church and Lost Village roads.

After locating two helmets and identifying snowmobile tracks Monday afternoon, a few hundred yards northeast of the command center, divers searched the near freezing water for about 45 minutes before sunset. By mid-morning Tuesday, four air boats — with flat bottoms and fans for propulsion — worked through ice and actively falling snow.

The search was again paused for the night Tuesday, and resumed Wednesday morning with air boats using sonar technology to scan the water. When something is in the path of the sonar’s acoustic signal, an echo is returned and a buoy placed. Divers can then focus on buoyed spots to limit their time in the water.

Though Mr. Redmond has not been found, two online fundraisers are accepting donations to help the Redmond family cover funeral expenses for Mr. and Miss Redmond, who is affectionately called “Sassy” by family.

Titled “Redmond Funeral Fund” on GoFundMe, more than $2,905 had been raised by 58 people as of the time of this report. On Facebook, a fundraising page called “Larissa ‘Sassy’ Redmond” has generated $5,610 from 156 donors.