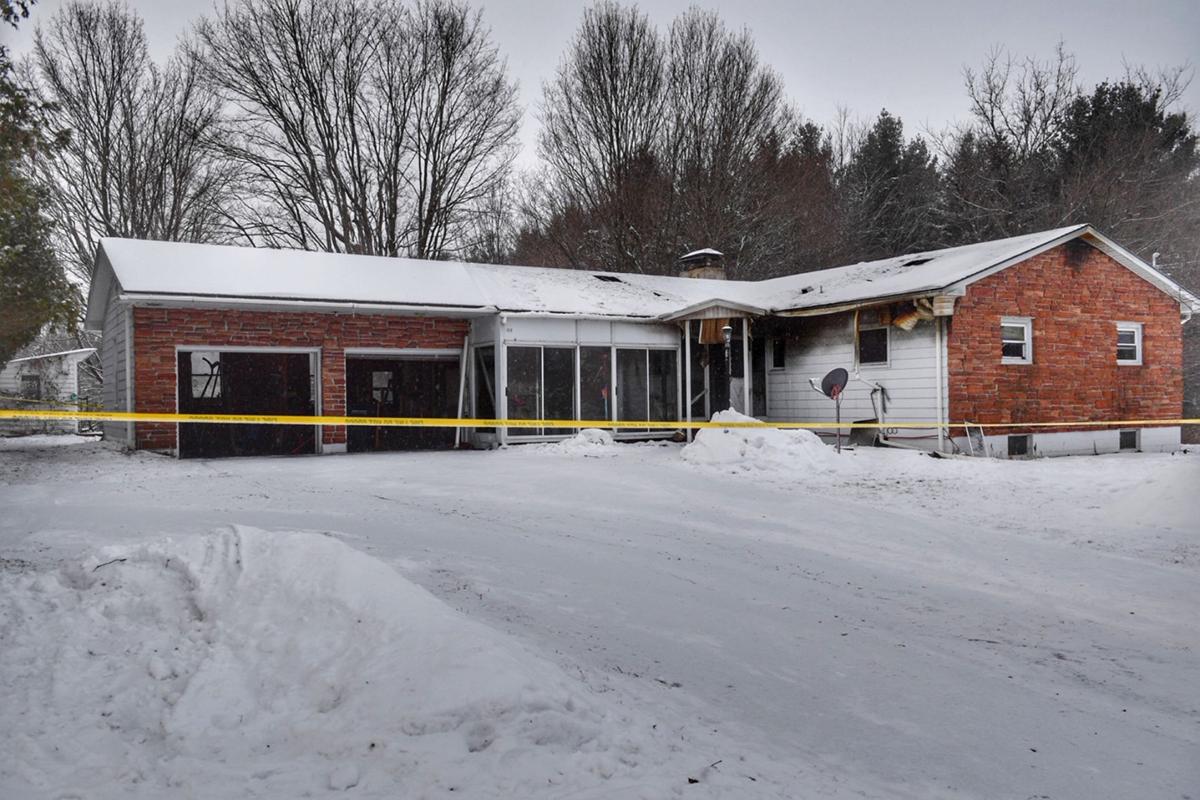 West Stockholm Fire Department Chief Robert White died at the scene of this fire apparently due to heart disease. The fire has been determined to be accidental. Christopher Lenney/Watertown Daily Times 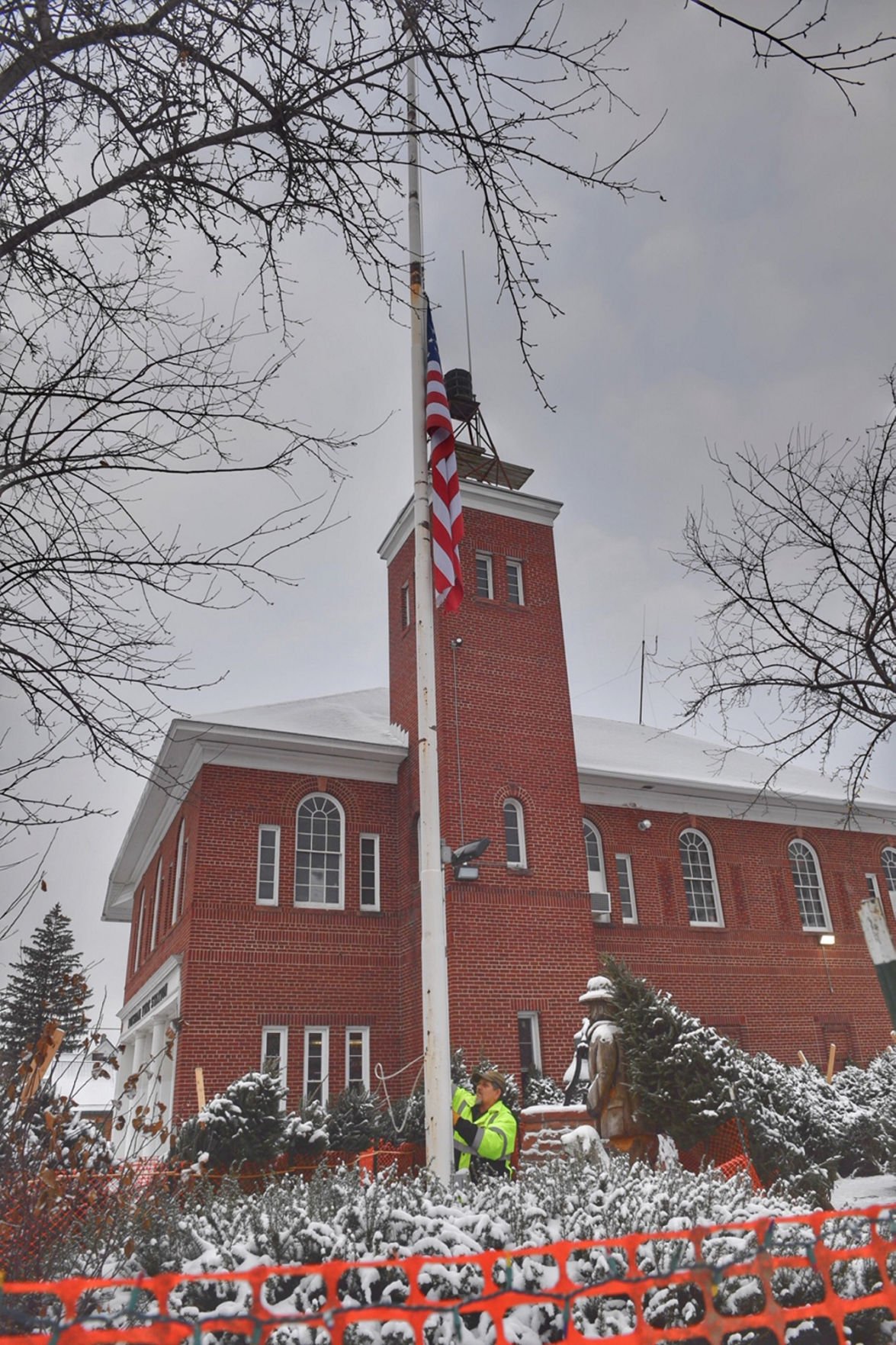 Chief Tim Jerome lowers the flag in front of the Potsdam Fire Station to half staff in honor of “his fallen brother,” Chief Robert White of the West Stockholm Fire Department. Mr. White died while at the scene of a fire Thursday. Christopher Lenney/Watertown Daily Times

West Stockholm Fire Department Chief Robert White died at the scene of this fire apparently due to heart disease. The fire has been determined to be accidental. Christopher Lenney/Watertown Daily Times

Chief Tim Jerome lowers the flag in front of the Potsdam Fire Station to half staff in honor of “his fallen brother,” Chief Robert White of the West Stockholm Fire Department. Mr. White died while at the scene of a fire Thursday. Christopher Lenney/Watertown Daily Times

POTSDAM — Robert White, fire chief of the West Stockholm Fire Department, died after responding to the scene of a fire in Potsdam on Thursday.

Shortly before 7 p.m., it appears Mr. White, 65, noticed a fire igniting at a house a few doors down from where he lives on Route 11B in the town of Potsdam. Though details are few, when Mr. White responded to the scene, a medical emergency occurred and he was transported to Canton-Potsdam Hospital. June Wood, a coroner for St. Lawrence County, said she was called to the hospital after a doctor pronounced Mr. White dead at 7:45 p.m. She said she started her investigation and would assist in the autopsy.

Potsdam Fire Chief Tim Jerome said there were heavy flames coming out of the rear of the structure when his department arrived. Crews set up a water supply and began spraying and ventilating the building, he said. It took firefighters around 15 minutes to knock it down.

Though Mr. Jerome did not want to discuss the nature of his counterpart’s death, he said Mr. White had been fire chief in West Stockholm for as long as he can remember.

After crews worked hot spots and continued ventilating, they turned the scene over to the sheriff’s department and state police for an investigation.

Matt Tuper, first assistant at the West Stockholm Fire Department, said their department will not comment on how Mr. White died until an autopsy is performed.

“We are doing what we can to assist the family with anything they need,” Mr. Tuper said Friday morning. “And we’re making sure we properly honor him as a person and a father figure to all of us firemen.”

St. Lawrence County Legislator Nance A. Arquiett, who knew Mr. White from their time working together at Reynolds in Massena, told the Times Friday morning that Mr. White lived and breathed community service.

“He is so involved in the community and in fire and rescue and always a smiling face,” Mrs. Arquiett said. “He is just one of those people who is connected to everybody.”

She said firefighters who she knew from around the area had reached out to her following Mr. White’s death, praising his training services and how he was the top trainer when it came to fire safety and rescue,

“They left knowing everything that they needed to know to safely rescue and escape and it is one of those things that while this is obviously a tragic time, his family will feel a little consolation knowing just how well respected he was in this area,” she said. “Not just respected, he was an asset. This is considered one of the largest losses in our fire community.”

Emergency personnel agencies across the region joined Mrs. Arquiett in expressing condolences to the friends and family of Mr. White.

Mr. White was not only the fire chief, but also served as District Deputy Fire Coordinator Car 7.

“Chief White gave 200 percent not only when responding to scenes, but also when training new firefighters, making sure that they had the knowledge and preparedness they needed to do their job safely and effectively,” Mrs. Arquiett posted on Facebook. “It was Chief White’s priority to keep the community safe while making sure his crew returned home to their families. Being part of Fire and Rescue is a huge commitment of both time and love. Thank you to Chief White’s family for sharing him with us.”

“We greatly appreciate the years of dedicated service to the county and mourn this tremendous loss,” the St. Lawrence County Sheriff’s Office posted on its Facebook page.

“The loss to the fire service is immeasurable,” Canton fire posted. “Chief White was dedicated to his family, community, and his fellow firefighters. Our thoughts are with his family at this very difficult time.”

The investigations branch of the New York State Fire Protection Specialists PEF Div 179 was on the scene of the fire Thursday night.

“Our hearts go out to the members and family of the West Stockholm Fire Company and Fire Chief Robert White,” the division posted.

Friends may call at the Garner Funeral Service on Tuesday, from 2 to 6 p.m. A memorial service will be held on Wednesday at 11 a.m. at Hosmer Hall on the campus of SUNY Potsdam.