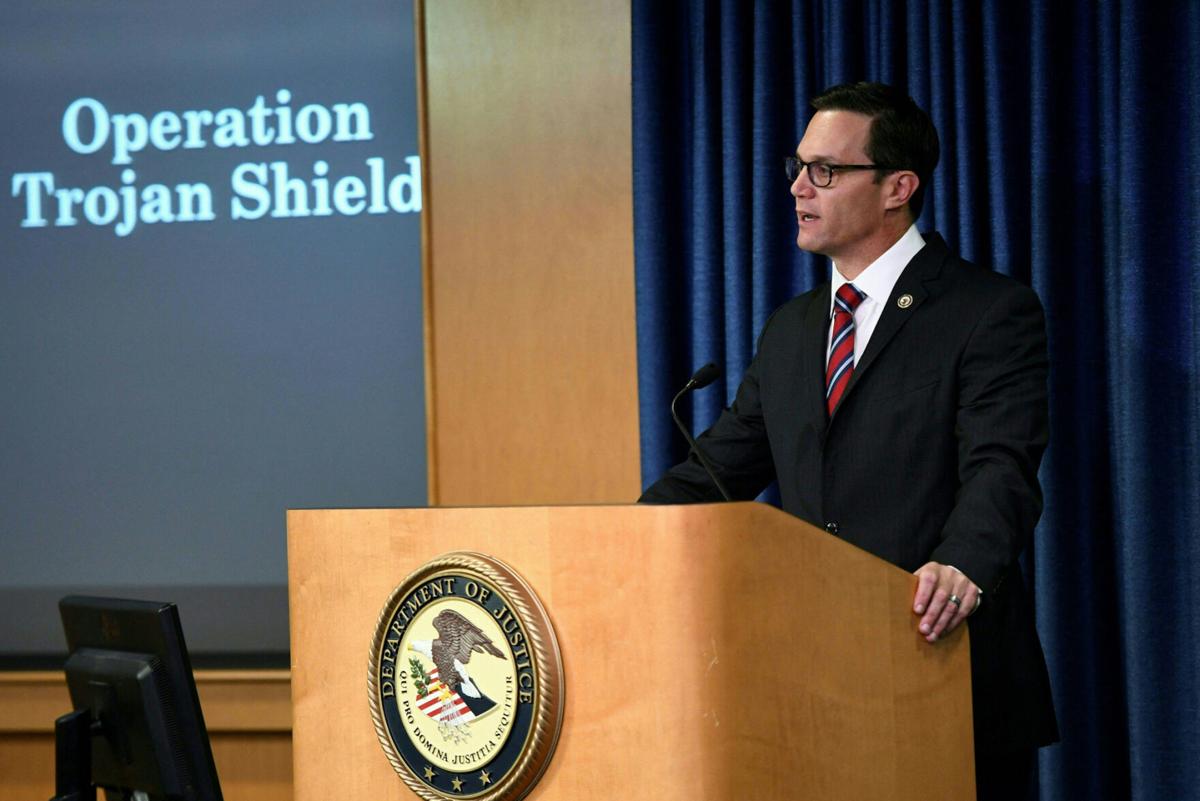 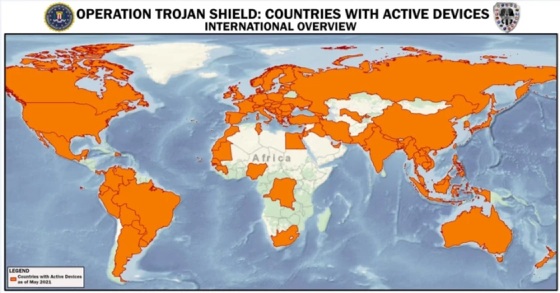 SAN DIEGO — The full extent of an unprecedented FBI effort to beat the criminal underworld at its own encrypted-communications game became clearer Tuesday following a two-day takedown, with some 800 arrests worldwide and San Diego racketeering indictments against 17 high-level targets, according to federal authorities.

The agents secretly read each message that poured in — 27 million in all. They read about shipments of cocaine stamped with Batman logos, cocaine hidden in tuna cans headed to Belgium, cocaine sent in French diplomatic pouches and cocaine in refrigerated fish destined for Spain, according to a search warrant unsealed this week.

There was talk of planned murders, evidence of corrupt law enforcement officers and a rare behind-the-scenes glimpse of crime bosses conducting their own profitable side deals, officials said.

The messages that were secretly being funneled to investigators over an 18-month period were brazenly unfiltered in detail and breadth, recording the every movement of some 300 organized crime groups operating in more than 100 countries, San Diego FBI Special Agent in Charge Suzanne Turner said at a news conference Tuesday morning.

Intelligence was then turned over to the appropriate authorities in cooperating countries. Several drug shipments were intercepted, and murders likely thwarted as a result, she said.

The takedown of the operation was announced the previous day by partner agencies in Australia, New Zealand and Europe, where the vast majority of users — from biker gangs to Italian mafia cells — were targeted for arrest on various criminal charges. About 500 people were arrested within the past couple days, adding to the 300 earlier arrests that had been made throughout the course of the investigation.

No one was arrested in the United States. However, 17 foreign nationals have been indicted on U.S. racketeering charges for their alleged roles of aiding and enriching criminal organizations by either administering or distributing the ANOM cellphones.

Eight defendants were arrested in other countries and nine remain fugitives. They will eventually be extradited to San Diego.

The case stemmed from a series of related investigations based in San Diego, starting with the undercover infiltration of Owen Hanson’s international sports-betting and drug-trafficking organization.

Hanson’s organization depended on encrypted communications hosted by Phantom Secure, a Canada-based company. When a joint effort by the FBI, Canada and Australia took down that service, it created a void for Phantom Secure’s 10,000 customers.

Exactly how the FBI took the investigation to the next level is detailed in a search warrant affidavit unsealed late Monday.

During the investigation, agents were able to recruit a confidential source who had previously distributed phones for Phantom Secure and was developing the next-generation encryption device, according to the search warrant. The phone was stripped of all other capabilities and connectivity and used only to send messages to others on the same platform.

The source — who has a previous drug-importation conviction and was facing charges in connection with the Phantom Secure case — agreed to offer his new phone to agents for the massive sting, as well as distribute the product to contacts within criminal organizations, the warrant says. He was paid $120,000 by the FBI for his services and another $59,500 in travel and living expenses.

But the device needed major tweaks.

The Australian Federal Police helped build a master key into the existing encryption system so that each message could be secretly decrypted and stored by law enforcement as it was transmitted.

A geofence was put up around the United States so messages could not be collected from ANOM devices located in the United States, according to the search warrant — a safeguard apparently meant to protect the constitutional rights of U.S. citizens. The Fourth Amendment prohibits the government from indiscriminately eavesdropping on the electronic communications of U.S. citizens without a probable-cause search warrant.

Instead, the operation was designed to collect information from foreigners using the devices abroad, per an “international cooperation agreement,” according to the U.S. attorney’s office.

Assistant U.S. Attorney David Leshner declined to discuss the specifics of the U.S. and foreign legal authorities used for the operation Tuesday.

“It was a lawful operation, and our foreign partners complied with their own legal requirements,” he said.

ANOM started off with a small-batch test run in Australia in October 2018, using three former Phantom Secure distributors to get the phones into the hands of criminal groups. Australia’s initial judicial order for the intercepts did not allow sharing with foreign partners, and the FBI was only made aware of the general nature of the messages.

But the experiment worked and was green-lighted for expansion.

The FBI didn’t begin collecting and reading messages until October 2019, when an unidentified cooperating country obtained legal permission to route the messages through an iBot server. The country then regularly sent the latest batches messages to the FBI to read and analyze. Any messages that appeared to come from within the U.S. were reviewed by the Australian Federal Police only for threats to life, according to the warrant.

The subsequent takedown of another encrypted platform, Encrochat, by European authorities in 2020 pushed more customers through word-of-mouth to ANOM.

Demand for ANOM boosted again after the San Diego FBI and partner countries dismantled yet another encrypted platform, Sky Global, in March. The Canadian-based CEO is being prosecuted in San Diego.

Over time, the FBI covertly built a distribution network of trusted experts in encryption security who marketed ANOM as “designed by criminals, for criminals,” helping build up the appearance of legitimacy, prosecutors said. That network is now facing charges in San Diego.

Three men — Joseph Hakan Ayik of Turkey, Domenico Catanariti of Australia, and Maximilian Rivkin, a Swedish citizen living in Turkey — are accused of working as administrators for ANOM. They were given control over customer service functions by initiating new accounts, setting up access for distributors and wiping devices clean when the device was believed to have been compromised by law enforcement, according to the indictment.

Ayik is a well-known figure in Australia — dubbed the “Facebook gangster” by media — who openly flashed his illicit wealth before fleeing the country following a heroin-trafficking investigation, according to news reports. He and Rivkin were still at large, while Catanariti is in custody.

Fourteen others — from across Europe, Columbia, Thailand and elsewhere — are charged as distributors.

The countries with the most users were identified as Germany, the Netherlands, Spain, Australia and Serbia.