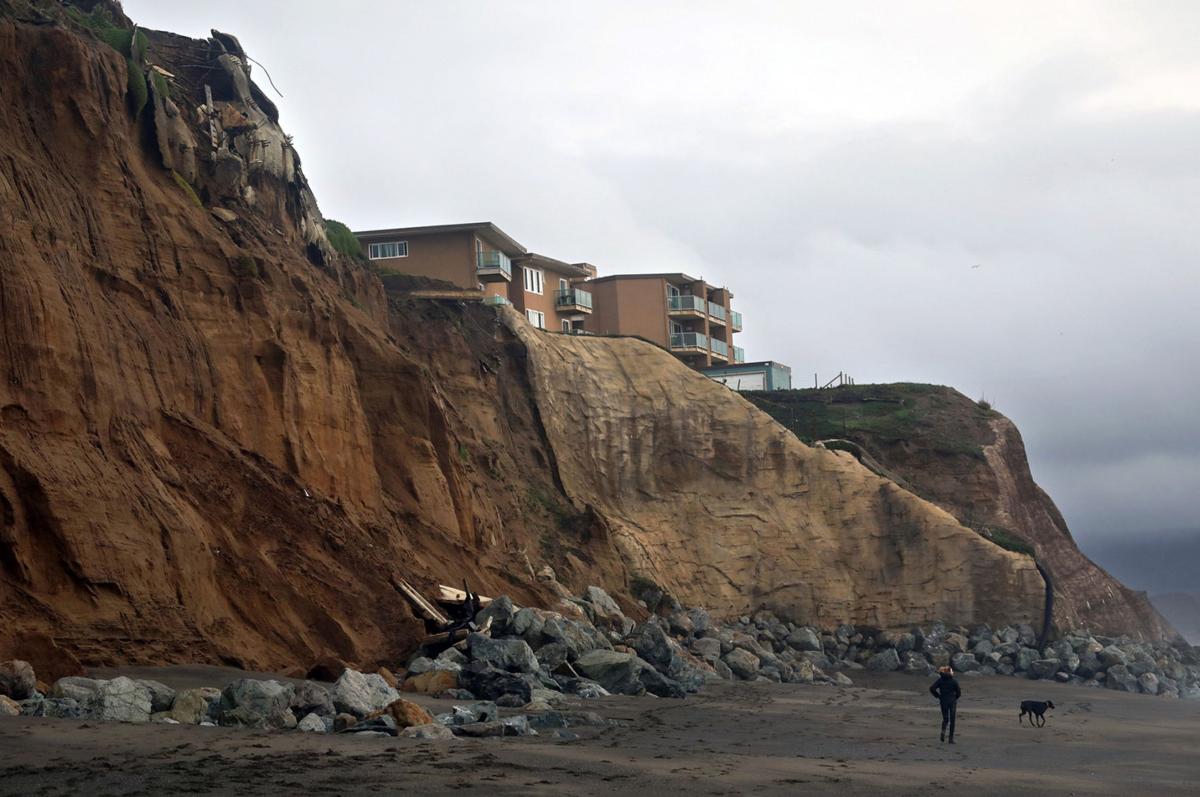 On Pacifica Esplanade Dog Beach, the remains of an apartment building that fell off of the cliffs can be seen, along with another one still standing on January 21, 2019, in Pacifica, Calif. Carolyn Cole/Los Angeles Times/TNS 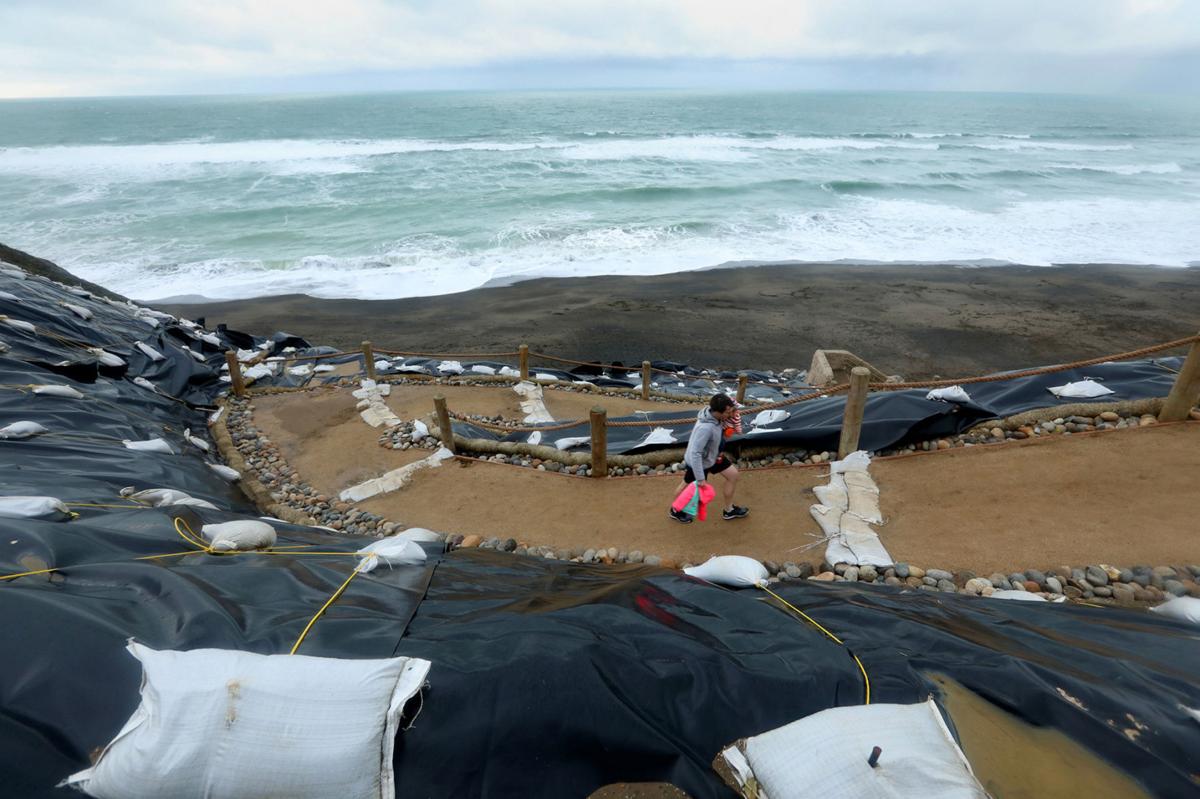 Plastic tarps, sandbags, and ropes are positioned to help prevent erosion of the cliffs in the town of Pacifica, Calif., on January 20, 2019. Carolyn Cole/Los Angeles Times/TNS 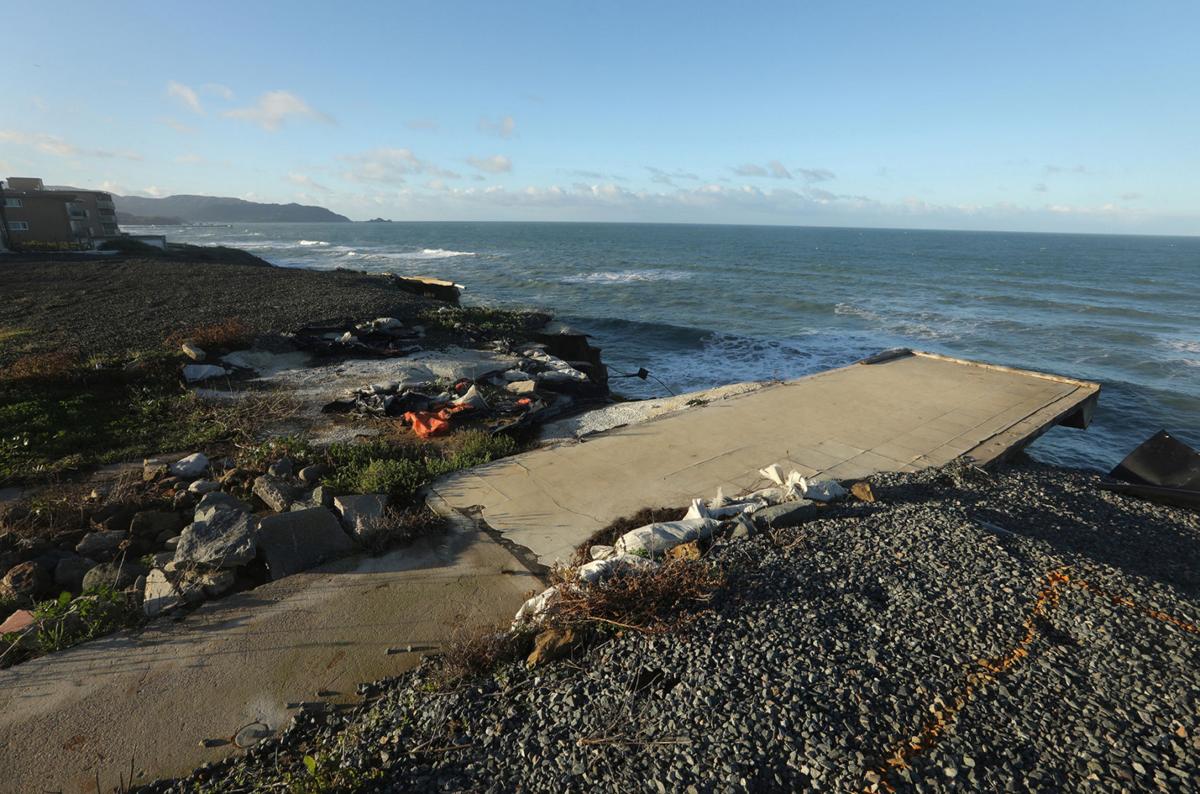 The walkway to an apartment building that fell off the cliff on Esplanade Avenue in Pacifica, Calif., on January 21, 2019. (Carolyn Cole/Los Angeles Times/TNS) 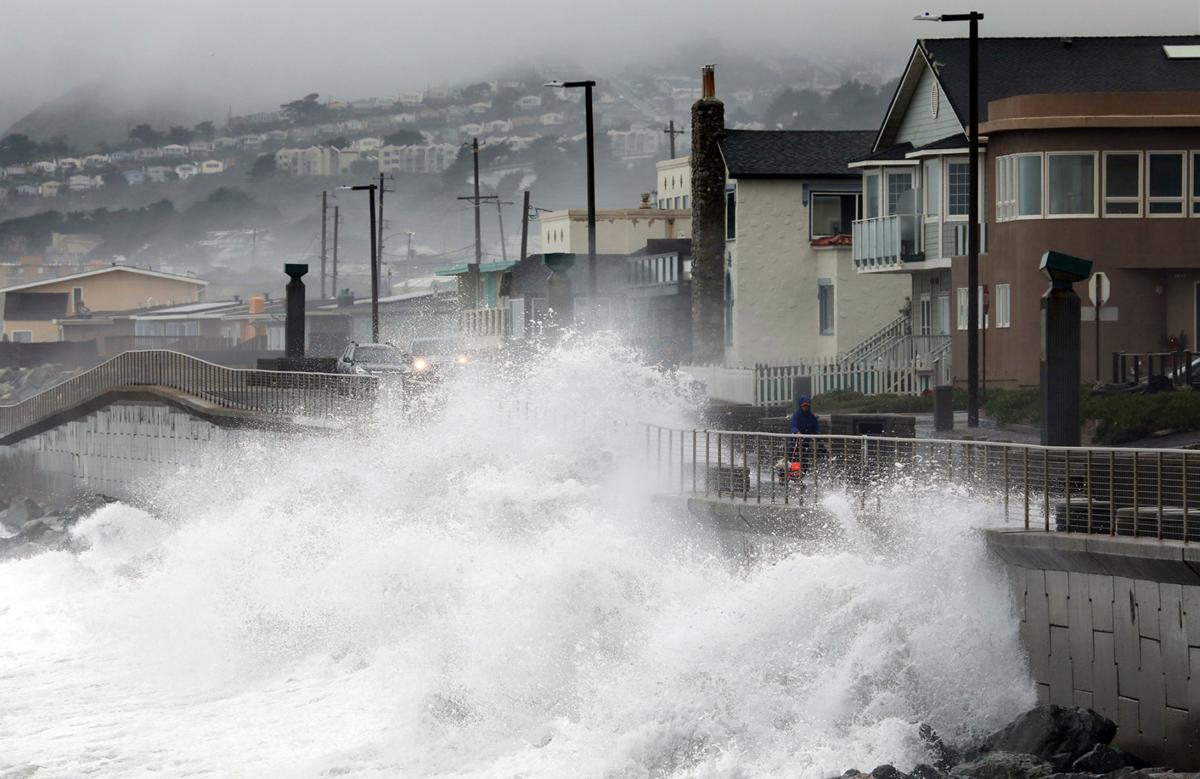 Water splashes onto Beach Boulevard in Pacifica, Calif., on January 20, 2019, on the day of a king tide. The town, just south of San Francisco, is ground zero for the issue of coastal erosion. Carolyn Cole/Los Angeles Times/TNS

On Pacifica Esplanade Dog Beach, the remains of an apartment building that fell off of the cliffs can be seen, along with another one still standing on January 21, 2019, in Pacifica, Calif. Carolyn Cole/Los Angeles Times/TNS

Plastic tarps, sandbags, and ropes are positioned to help prevent erosion of the cliffs in the town of Pacifica, Calif., on January 20, 2019. Carolyn Cole/Los Angeles Times/TNS

The walkway to an apartment building that fell off the cliff on Esplanade Avenue in Pacifica, Calif., on January 21, 2019. (Carolyn Cole/Los Angeles Times/TNS)

Water splashes onto Beach Boulevard in Pacifica, Calif., on January 20, 2019, on the day of a king tide. The town, just south of San Francisco, is ground zero for the issue of coastal erosion. Carolyn Cole/Los Angeles Times/TNS

LOS ANGELES — The California coast grew and prospered during a remarkable moment in history when the sea was at its tamest.

But the mighty Pacific, unbeknownst to all, was nearing its final years of a calm but unusual cycle that had lulled dreaming settlers into a false sense of endless summer.

While other regions grappled with destructive waves and rising seas, the West Coast for decades was spared by a rare confluence of favorable winds and cooler water. This “sea level rise suppression,” as scientists call it, went largely undetected. Blinded from the consequences of a warming planet, Californians kept building right to the water’s edge.

But lines in the sand are meant to shift. In the last 100 years, the sea rose fewer than 9 inches in California. By the end of this century, the surge could be greater than 9 feet.

The coastline is eroding with every tide and storm, but everything built before we knew better — Pacific Coast Highway, multimillion-dollar homes in Malibu, the rail line to San Diego — is fixed in place with nowhere to go.

But the world is getting hotter, the great ice sheets still melting, the rising ocean a slow-moving disaster that has already swept past California’s front door. Seaside cliffs are crumbling in Pacifica, bringing down entire buildings. Balboa Island, barely above sea level, is spending $1.8 million to raise the wall that separates it from the ocean.

There are only so many ways to play against the rising sea. Seawalls are one option, but they come with a hidden cost — forcing the sand before them to wash away. For every new seawall protecting a home or a road, a beach for the people is sacrificed.

Then there’s what scientists and economists and number-crunching consultants call “managed retreat”: Move back, relocate, essentially cede the land to nature. These words alone have roiled the few cities bold enough to utter them. Mayors have been ousted, planning documents rewritten, campaigns waged over the very thought of turning prime real estate back into dunes and beaches.

Retreat is as un-American as it gets, neighborhood groups declared. To win, California must defend.

But at what cost? Should California become one long wall of concrete against the ocean? Will there still be sandy beaches or surf breaks to cherish in the future, oceanfront homes left to dream about? More than $150 billion in property could be at risk of flooding by 2100 — the economic damage far more devastating than the state’s worst earthquakes and wildfires. Salt marshes, home to shorebirds and endangered species, face extinction. In Southern California alone, two-thirds of beaches could vanish.

The state has both no time and too much time to act, spiraling into paralyzing battles over the why, who, when and how. It’s not too late for Californians to lead the way and plan ahead for sea level rise, experts say, if only there is the will to accept the bigger picture.

Returning after mudslides and wildfire. Rebuilding in flood zones. The human urge to outmatch nature is age-old. We scoff at the fabled frog that boiled to death in a pot of slowly warming water — but refuse to confront the reality of the sea as it pushes deeper into our cities.

We’ve all played by the shore and built castles in the sand, but seem to forget what happens next: The ocean always wins.

On the bluffs and shores of Pacifica, a postcard stretch of coastal hamlets just south of San Francisco, residents fear that planning for sea level rise means condemning their own community to extinction.

Here, what other cities in California are only beginning to worry about in the abstract is already a much-lived reality. Powerful waves crest over the main pier and threaten roads with names such as Beach Boulevard and Shoreview Avenue. Blasts of sand batter walls and homes. Windows shatter. Cliffs collapse. Residents bear witness to entire chunks of hillside crumbling into the surf below.

In one part of town, the ocean chewed away more than 90 feet of bluff in less than a decade.

Years of drought followed by heavy storms in 2016 forced more than a dozen bluff-top residences to be tagged as unsafe. Three apartment buildings — suddenly dangling off the edge — could not be saved and were demolished.

Responding to just this most recent El Nino season has cost Pacifica $16 million — no small change for a town whose $36 million operating budget relies mostly on property taxes. Officials are still seeking funds to cover damage from 2016 and remain mired in an eminent domain battle over two of the buildings.

Pacifica has become this story of unplanned, forced retreat, experts say, and the public got stuck with the bill.

“‘Managed retreat’ is code word for give up — on our homes and the town itself,” said Mark Stechbart, who worries that Pacifica, and in turn his own home’s value, will be dismissed by future developers, insurers and buyers. “This is not just some intellectual exercise. These are real people and a real town at stake.”

A few winding turns past Bodega Bay, about an hour north of San Francisco, relentless waves pound against a stretch of coastline whose fate has been paralyzed by political inaction.

Once referred to as Malibu North, Gleason Beach now feels more like the edge of the world — a window into the future if California does not change course. Nine homes perch on crumbling cliffs that drop 30 some feet onto a beach that appears only during low tide. A pile of seawalls, smashed into pieces, clutters the shore.

Rebar and bits of concrete poke out here and there — a graveyard of more than 10 other homes that once also faced the sea. Highway 1, hanging inches from the edge, had to shut one traffic lane this year.

“Behold your highway tax dollars falling into the ocean,” locals say. But efforts to move 0.6 miles of this critical road about 400 feet inland have taken more than a decade. Residents, environmentalists, and state, county and transportation officials are still arguing over the details.

Mary Cook remembers moving into a seaside cottage from the 1930s. Photos back then showed the house with a 20-foot yard. Stairs led down to the beach.

Her husband, an architect, made a few additions to their home as the bluff continued to erode about a foot a year. They put up a seawall. But then in the winter of 1997, one big storm took out the entire cliffside. Officials came in and declared an emergency.

When Cook opened her sliding door, “there was nothing,” she said. “You looked straight down into the ocean.”

Life for her neighbors eventually carried on. The storm ebbed from memory. The sun reemerged. The Cooks, however, were tired of buying time.

They jacked their home up from its foundation, called in a truck and moved to higher ground.