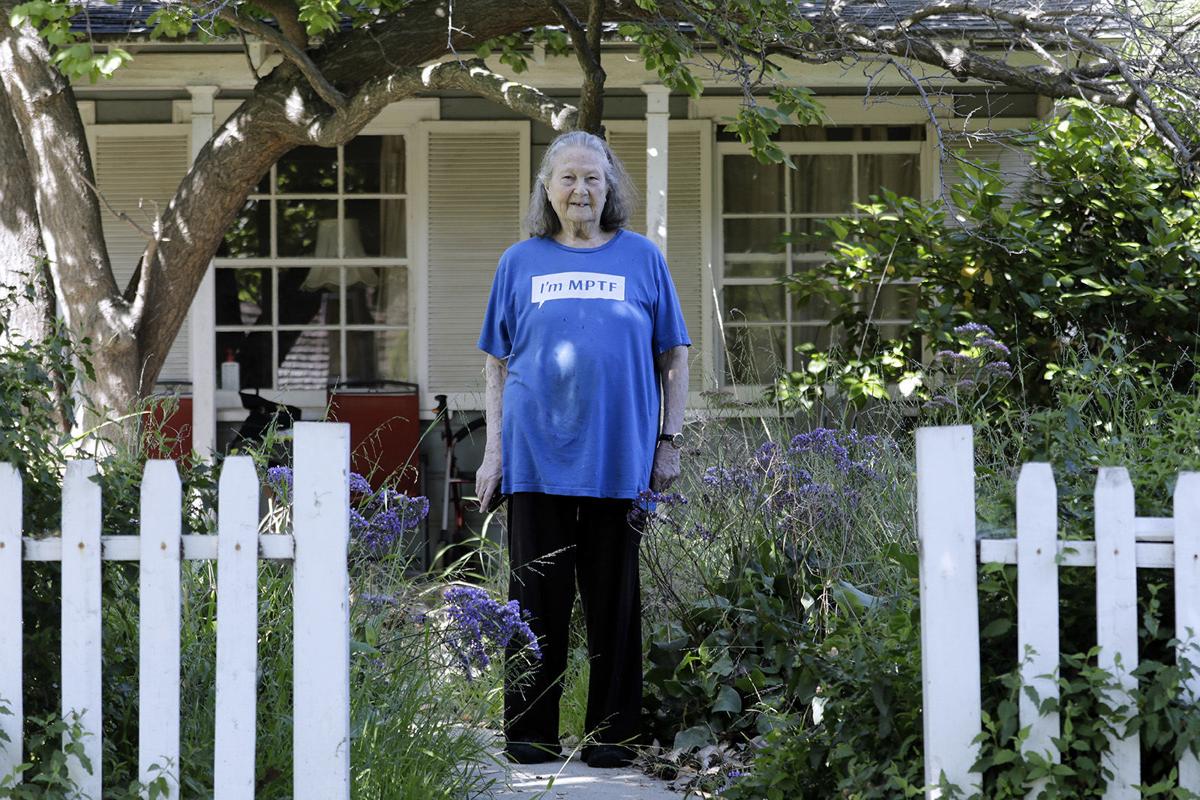 Carol Liston, 89, says her Studio City neighbors look out for her, even doing her grocery shopping. The coronavirus pandemic has brought ageism to the forefront implying that their lives are not as valuable as reviving the economy. Myung J. Chun/Los Angeles Times/TNS 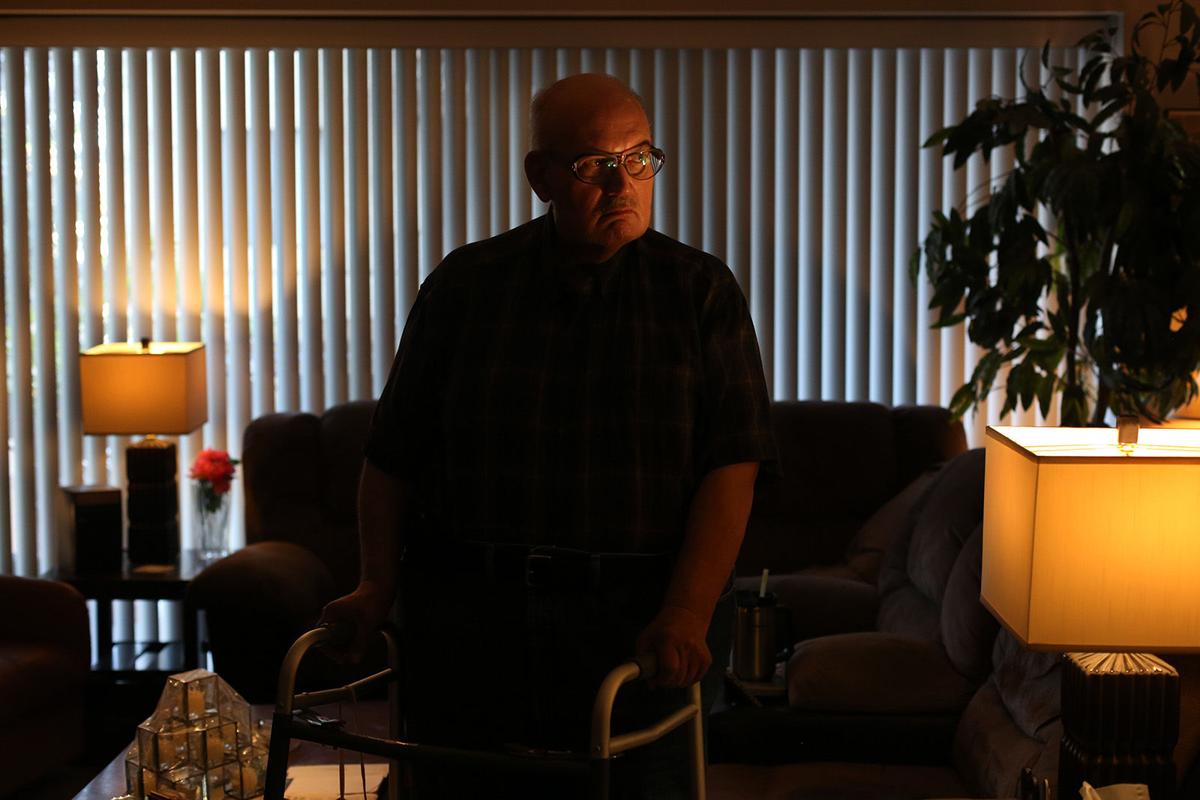 Gregory Kuhl, 69, in an apartment where he has lived for 40 years in Hollywood on April 27 in Los Angeles, Calif. He uses a wheelchair outside his home and inside is able to get around short distances on his feet and with a walker. Dania Maxwell/Los Angeles Times/TNS 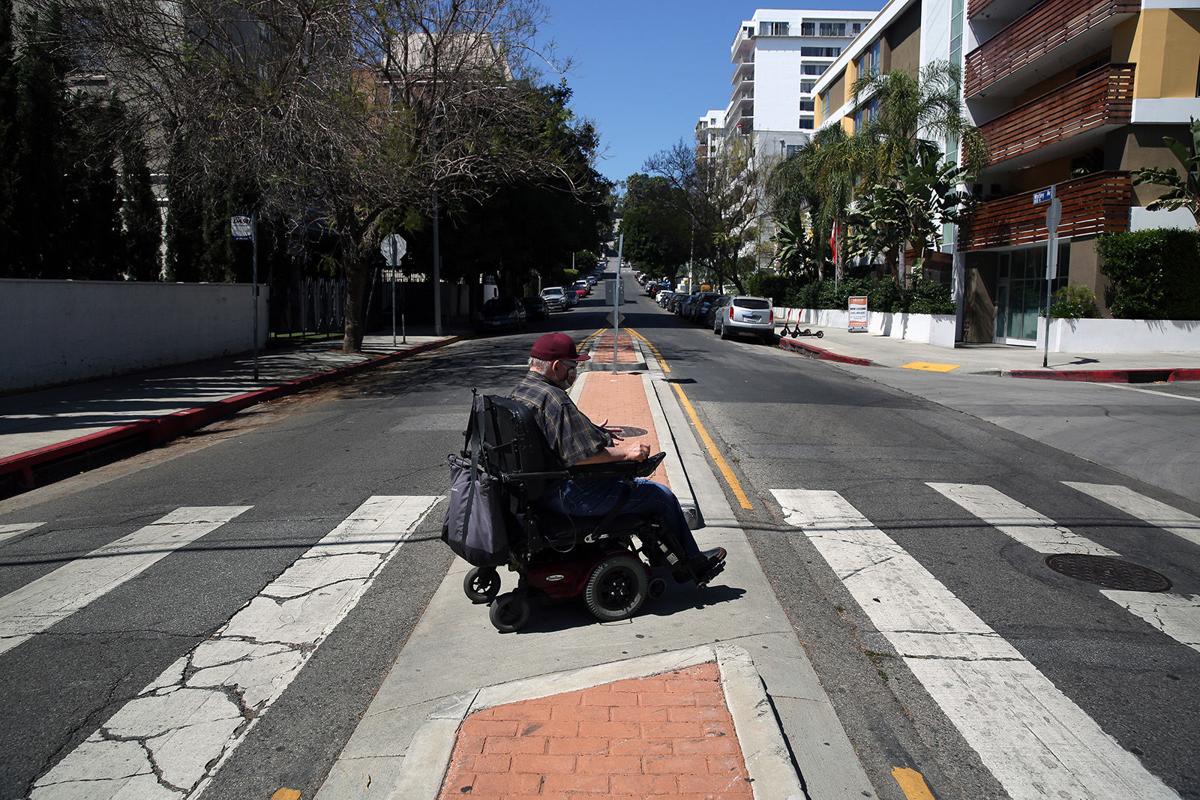 Gregory Kuhl, 69, returns to his street after shopping at Sprouts in Hollywood on April 28 in Los Angeles. Sometimes there are major cracks in the pavement, cars in peoples driveways or leveling issues that make navigating his route difficult. Dania Maxwell/Los Angeles Times/TNS 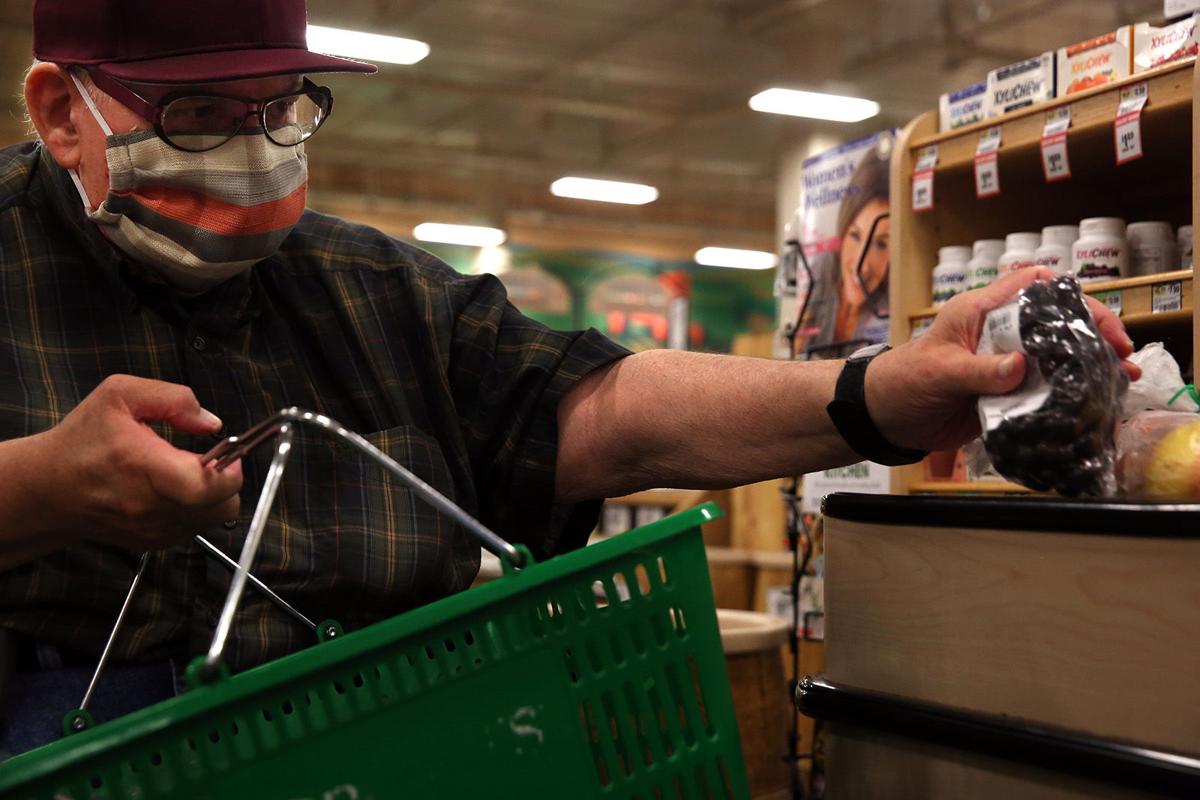 Gregory Kuhl, 69, shops at Sprouts in Hollywood on April 28 in Los Angeles. Not being able to use his own bag is a challenge as it allows him to carry what he needs. Dania Maxwell/Los Angeles Times/TNS

Carol Liston, 89, says her Studio City neighbors look out for her, even doing her grocery shopping. The coronavirus pandemic has brought ageism to the forefront implying that their lives are not as valuable as reviving the economy. Myung J. Chun/Los Angeles Times/TNS

Gregory Kuhl, 69, in an apartment where he has lived for 40 years in Hollywood on April 27 in Los Angeles, Calif. He uses a wheelchair outside his home and inside is able to get around short distances on his feet and with a walker. Dania Maxwell/Los Angeles Times/TNS

Gregory Kuhl, 69, returns to his street after shopping at Sprouts in Hollywood on April 28 in Los Angeles. Sometimes there are major cracks in the pavement, cars in peoples driveways or leveling issues that make navigating his route difficult. Dania Maxwell/Los Angeles Times/TNS

Gregory Kuhl, 69, shops at Sprouts in Hollywood on April 28 in Los Angeles. Not being able to use his own bag is a challenge as it allows him to carry what he needs. Dania Maxwell/Los Angeles Times/TNS

LOS ANGELES — On the good days, Bonnie Reed believes that, for the first time in a long time, just about everyone is united in a common cause: to protect society’s most vulnerable citizens against the coronavirus.

On the bad days, the Sherman Oaks senior is stunned by the carelessness she sees around her. She sees it in the unmasked young people who saunter toward her and her husband, Alton, with little regard for social distancing. She sees it in the decisions of some governors to reopen economies despite dire warnings from public health officials.

Reed, who did not want to reveal her age, tries to not take it personally. But on those bad days, it can feel as though such actions send a clear message about how little some people care about the well-being of older adults, who make up roughly 80% of those who die from COVID-19 complications.

“Am I the only one feeling like they’re ready to throw us out?” she asks herself.

As the debate rages over when or how to resume public life, older adults like Reed have increasingly borne witness to behavior and rhetoric that implies that their lives are not as valuable as reviving the economy.

Ageism has been quietly pervasive in American culture for decades, according to those who work with and study the health of seniors. But they fear that this particular form of discrimination has become magnified during the pandemic as those who have lost income and stability look for someone to blame.

“The stigma (against elders) is growing,” said Dilip Jeste, a geriatric psychiatrist at the University of California, San Diego Center for Healthy Aging. “Anytime you mention the virus and risk, immediately people think of older adults. They think of the people more likely to be hospitalized, to take up beds in the ICU.”

This rejection of prolonged sacrifices made by all for the sake of the old has been voiced from the highest ranks of government.

Patrick, who turned 70 in March, said no one had asked him if he was willing to risk his survival in order to save the American economy for future generations. But, he added, “If that’s the exchange, I’m all in.”

Nationwide anti-lockdown protests show that many have taken that idea to heart. One woman among the dozens who rallied outside Tennessee’s state capitol on April 20 held a sign that read “Sacrifice the weak, reopen (Tennessee).”

Koshin Paley Ellison, co-founder of The New York Zen Center for Contemplative Care, said a photo of the sign was circulated among the community of older adults he leads in spiritual practice.

“What does that do to those who are feeling weak?” Paley Ellison said. “It terrifies them.”

But no one from the group was surprised. On a Facebook chat, they talked about how a subtler disdain for older people has been a running thread in American culture. They are well aware of the prevailing belief that beauty and productivity — the primary measures of worth in the U.S. — are the domains of the young.

But this prejudice has become acute during the pandemic, they agreed. “It’s open season for discrimination against older, vulnerable people,” one person commented.

Eight prominent psychologists from across the globe were so concerned about mounting ageism that in mid-April they wrote an academic paper on the issue for the Gerontological Society of America.

“What we are seeing in public discourse is an increasing portrayal of those over the age of 70 as being all alike with regard to being helpless, frail, and unable to contribute to society,” they said.

The negative health effects of ageism are well-documented. When seniors face age-based discrimination and internalize harmful stereotypes, they are more likely to experience stress and depression and are at higher risk for chronic illnesses.

A 2018 study from researchers at Yale University found that ageism could lead to $63 billion in additional annual health care costs in the U.S.

Jeste, the geriatric psychiatrist at UC San Diego, worries that an increase in ageism could lead to weaker immune systems among the elderly.

“It could put them at higher risk of developing COVID complications,” Jeste said. “We are perpetuating that.”

Gregory Kuhl, a 69-year-old Hollywood resident, said he experienced age bias well before the coronavirus’s siege. Kuhl has severe spinal stenosis, a condition that compresses the nerves in his spinal cord and makes walking painful. He has often felt invisible in public; many people assume he isn’t capable or worthy of conversation, he said, because he is older and uses a wheelchair.

That sensation of invisibility has reached a fever pitch during the pandemic. Going to the grocery store has been especially frustrating, Kuhl said.

Though he receives most of his food through the Meals on Wheels program, Kuhl buys dairy and produce at a Sprouts market near his apartment. Recently, a cashier pushed Kuhl’s groceries to the edge of the checkout counter, indicating that he would need to bag his own groceries to prevent viral spread.

He placed the fruit and nuts in a bag on his lap, but it was too heavy to lift. Usually, the cashier would have hung the bag on the back of his wheelchair. A security guard eventually noticed Kuhl struggling and helped him out.

Kuhl felt similarly disregarded when he learned that most coronavirus testing in Los Angeles occurs at drive-up mobile sites. “Where do seniors who no longer drive go to get tested?” he wondered.

“Somebody somewhere needs to be thinking about the consequences (of the shutdown) for older people,” Kuhl said in an interview.

In these unprecedented times, unfavorable perceptions of older adults can be a matter of life and death, according to advocates for seniors and people with disabilities.

California Gov. Gavin Newsom was roundly criticized recently after his administration advised hospitals to prioritize younger people with greater life expectancy for care during the coronavirus outbreak. Those guidelines were swiftly retracted. They were not, however, without precedent.

When doctors are forced to make gut-wrenching decisions around who will receive scarce medical resources such as ventilators, two factors are typically considered: the likelihood that a person’s life will be saved, and the estimated years of life left, said David Magnus, director of the Stanford Center for Biomedical Ethics.

“If you’ve got strong evidence that someone will die in a year, that’s a pretty good reason for saying that person should be a lower priority for scarce ventilators,” Magnus said.

The bioethicist noted that in an “era of plenty,” health care systems often spend large amounts of money keeping people alive for weeks or months; a quarter of Medicare spending occurs in the last year of life.

The institutional concept of older people being worth less than younger people predates the pandemic. Cass Sunstein, a legal scholar who worked for the Obama administration, once proposed focusing government policies on saving years of life rather than individual lives.

The Environmental Protection Agency used a similar calculus during the George W. Bush administration when it was weighing the benefits of power-plant emission regulations. The agency determined that people over 70 were worth just 67% of the lives of younger people.

Jeste insists that this way of thinking is short-sighted. Assigning a value to seniors based on their economic output ignores the many other ways people contribute to society, he said. They travel and volunteer. They are mentors with decades of hard-earned wisdom. They take care of grandchildren and older family members.

It’s important for older people to question negative stereotypes and resist them if possible, said Becca Levy, a professor of epidemiology at the Yale School of Public Health who has been researching attitudes on aging since the 1990s.

“We’ve found that those who value and affirm their own meaningful contributions to society can avoid internalizing those stereotypes,” she said. On the flip side, Levy’s research shows that older adults with negative attitudes about aging may live 7.5 years less than those with positive attitudes.

Bonnie Reed knows her worth. The retired schoolteacher and her 74-year-old husband, Alton, volunteer for political campaigns and the Red Cross, and they’ve been trained by the Community Emergency Response Team (CERT) program to spring into action if an earthquake or fire happens in their community. She checks in on neighbors and makes sure her older cousin’s refrigerator is fully stocked.

“We try to help where we can,” Reed said.

Scott Kaiser, an L.A. geriatrician, stressed the interdependence of all age groups.

“The notion that creeps up from time to time, this pitting of generations against each other, is toxic and misguided,” he said.

Kaiser founded the Daily Call Sheet program, which connects volunteers who work in the entertainment industry with older members of the Motion Picture and Television Fund through weekly phone calls. Interest in the program, both by volunteers and participants, has swelled in recent weeks.

Fostering contact between the old and the young can help offset inter-generational tensions, Levy said.

Kuhl offered his own suggestion for combating ageism: reminding young people that they too will grow old — if they’re lucky.

“If you don’t think older people have value, what you’re really saying is that you’re not going to have value,” he said. “Is that what you really want?”