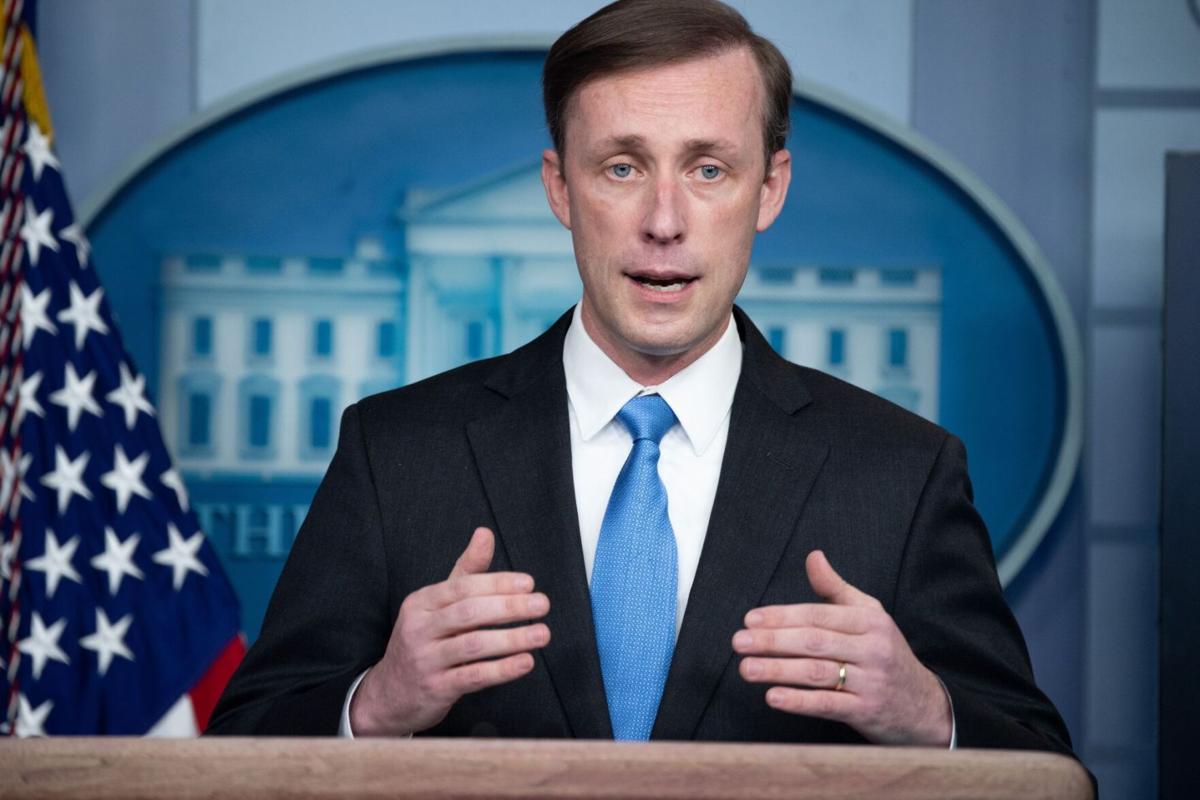 U.S. National Security Adviser Jake Sullivan speaks during a news briefing on Feb. 4, 2021, in the Brady Briefing Room of the White House. Sullivan said Thursday that the Biden administration is ready for any scenario in the Russia-Ukraine standoff. Saul Loeb/AFP via Getty Images/TNS 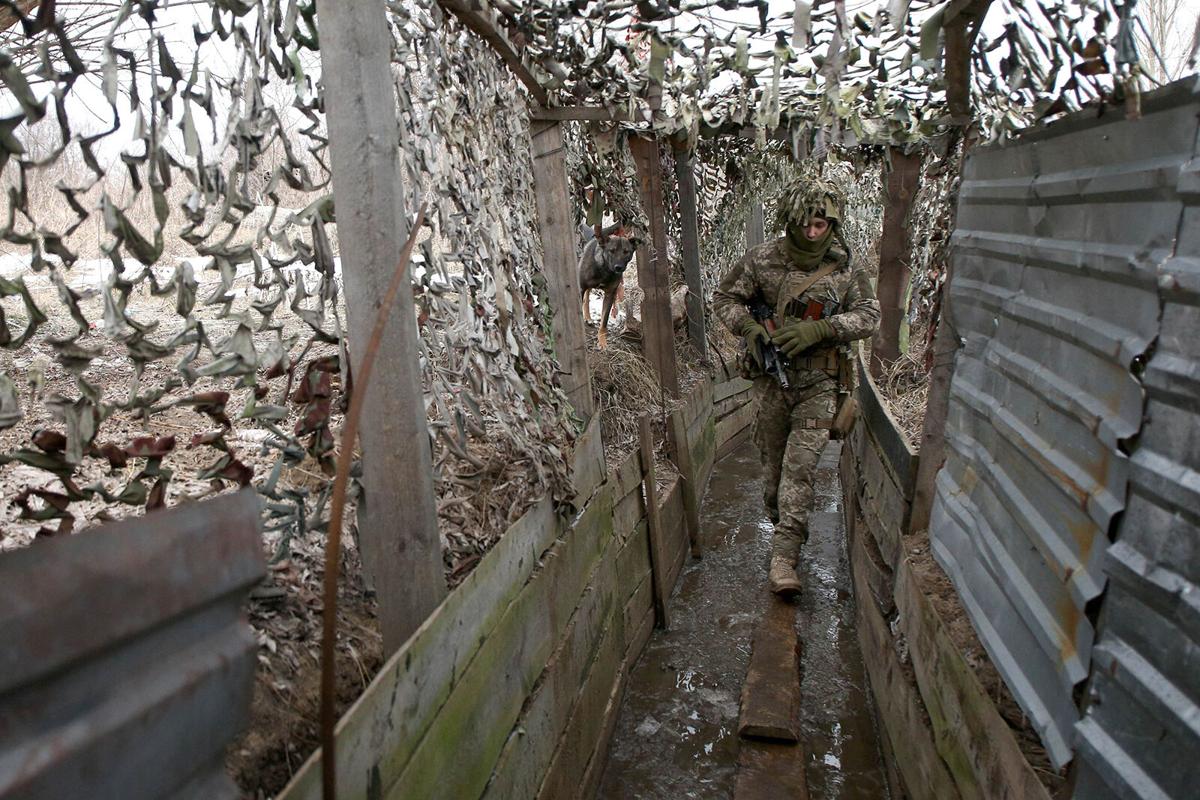 A Ukrainian Military Forces serviceman walks in a trench on the frontline with Russia-backed separatists near to Avdiivka, Donetsk, southeastern Ukraine, on Jan. 9. Anatolii Stepanov/AFP via Getty Images/TNS

U.S. National Security Adviser Jake Sullivan speaks during a news briefing on Feb. 4, 2021, in the Brady Briefing Room of the White House. Sullivan said Thursday that the Biden administration is ready for any scenario in the Russia-Ukraine standoff. Saul Loeb/AFP via Getty Images/TNS

A Ukrainian Military Forces serviceman walks in a trench on the frontline with Russia-backed separatists near to Avdiivka, Donetsk, southeastern Ukraine, on Jan. 9. Anatolii Stepanov/AFP via Getty Images/TNS

The Biden administration believes Russian actors are preparing potential sabotage operations against Russian forces and fabricating Ukrainian provocations in social media to justify an intervention and sow divisions in Ukraine, according to a U.S. official who asked not to be identified.

The Biden administration warned Russian actors are preparing potential sabotage operations against their own forces and fabricating provocations in social media to justify an invasion into Ukraine if diplomacy fails.

As part of the plan, President Vladimir Putin’s government has prepositioned operatives trained in urban warfare and in using explosives, possibly to carry out acts of sabotage against Russia’s proxy forces in or near Ukraine, administration officials said Friday.

“We do have information that indicates that Russia is already working actively to create a pretext for a potential invasion, for a move on Ukraine,” Pentagon spokesman John Kirby told reporters. “In fact, we have information that they have prepositioned a group of operatives to conduct a false flag operation.”

White House Press Secretary Jen Psaki said a Russian invasion, if it occurred, “could begin between mid-January and mid-February.”

Russia’s plan would probably be set in motion if diplomacy with the U.S., NATO and key European nations fail to achieve Moscow’s goals, according to an assessment shared by a U.S. official who asked not to be identified.

Russia has repeatedly denied it intends to invade its neighbor, and U.S. officials didn’t provide more details of the intelligence they said is behind their assessment. Kremlin spokesman Dmitry Peskov said Western media talk of Russia supposedly preparing provocations is unfounded, Tass reported.

Kirby said “there is a fidelity here to the information that we have that we believe is very credible.”

The assertion follows a cyber attack that downed a wide range of Ukrainian government websites on Friday. Seventy government agencies were hit, including the Foreign and Agriculture Ministries, according to Viktor Zhora, the deputy head of the state agency in charge of special communication and information protection.

“There was no leak of important data. The content of the websites was not damaged,” Zhora said. “We are collecting digital evidence and analyzing data to understand the full chain of this attack.”

President Joe Biden was briefed on Friday’s attack, but the U.S. didn’t immediately pin the blame on any group or nation, and administration officials said the affected websites appear to be coming back online.

Ukraine’s top security official, Oleksiy Danilov, told Sky News that he was 99.9% sure Russia was behind the attack. Countries in the European Union, with which Ukraine has sought to deepen ties, condemned the hacks, with Poland and Sweden also pointing the finger at Russia.

“The cyber attack reported by the Ukrainian side is part of the typical activities of the secret services of the Russian Federation,” said Stanislaw Zaryn, spokesman for Poland’s secret service chief. He said the message appeared to be an effort to fuel tensions between Poland and Ukraine.

Swedish Foreign Minister Ann Linde said earlier in the day: “We have to be very firm in our messages to Russia — that if there are attacks against Ukraine, we will be very harsh and very strong and robust in our response.”

In previous incursions in Ukraine’s Crimea region and in Georgia, Russia was accused of ramping up disinformation campaigns and staging “false flag” events to justify its interventions. Russia has rejected those charges.

With more than 100,000 Russian troops on Ukraine’s border, U.S. officials began warning in recent days that Moscow could try to create a “false flag” event to justify an incursion.

“No one should be surprised if Russia spreads disinformation about commitments that have not been made, or if Moscow goes even further and instigates something as a pretext for further destabilizing activity,” State Department spokesman Ned Price said Wednesday.

The Biden administration has discussed an array of possible actions by Moscow it believes should trigger retaliation, according to people familiar with discussions that have taken place this week. Aside from sending troops into Ukraine, it could include an effort to engineer a coup against Ukrainian president Volodymyr Zelenskiy or other acts to destabilize his government.

At briefings following three rounds of discussions with Russia this week, officials including Deputy Secretary of State Wendy Sherman said Russia has little to fear militarily from its western neighbor. But the U.S. and its allies have warned of a “massive” economic response against Russia should it undertake an attack on Ukraine.

Also potentially at risk in a Russian attack: almost 200 Florida National Guard troops who are in Ukraine as part of a regular rotation of U.S. forces and serve as trainers, Kirby said. The Pentagon spokesman said that, despite the warning about Moscow’s plans, the administration believes there is still space for diplomacy to resolve the crisis.

Talks in Europe this week failed to shed light on Moscow’s intentions, and no date has bee set for discussions to resume. While Putin has denied he plans to invade Ukraine he is demanding security guarantees from NATO that the military alliance says it cannot deliver.

U.S. National Security Advisor Jake Sullivan conceded on Thursday that the U.S. and Europe may not be in full agreement on which sanctions should come into force if Putin attacks Ukraine, but said he is confident that both sides agree there would be “severe economic consequences” for Moscow.