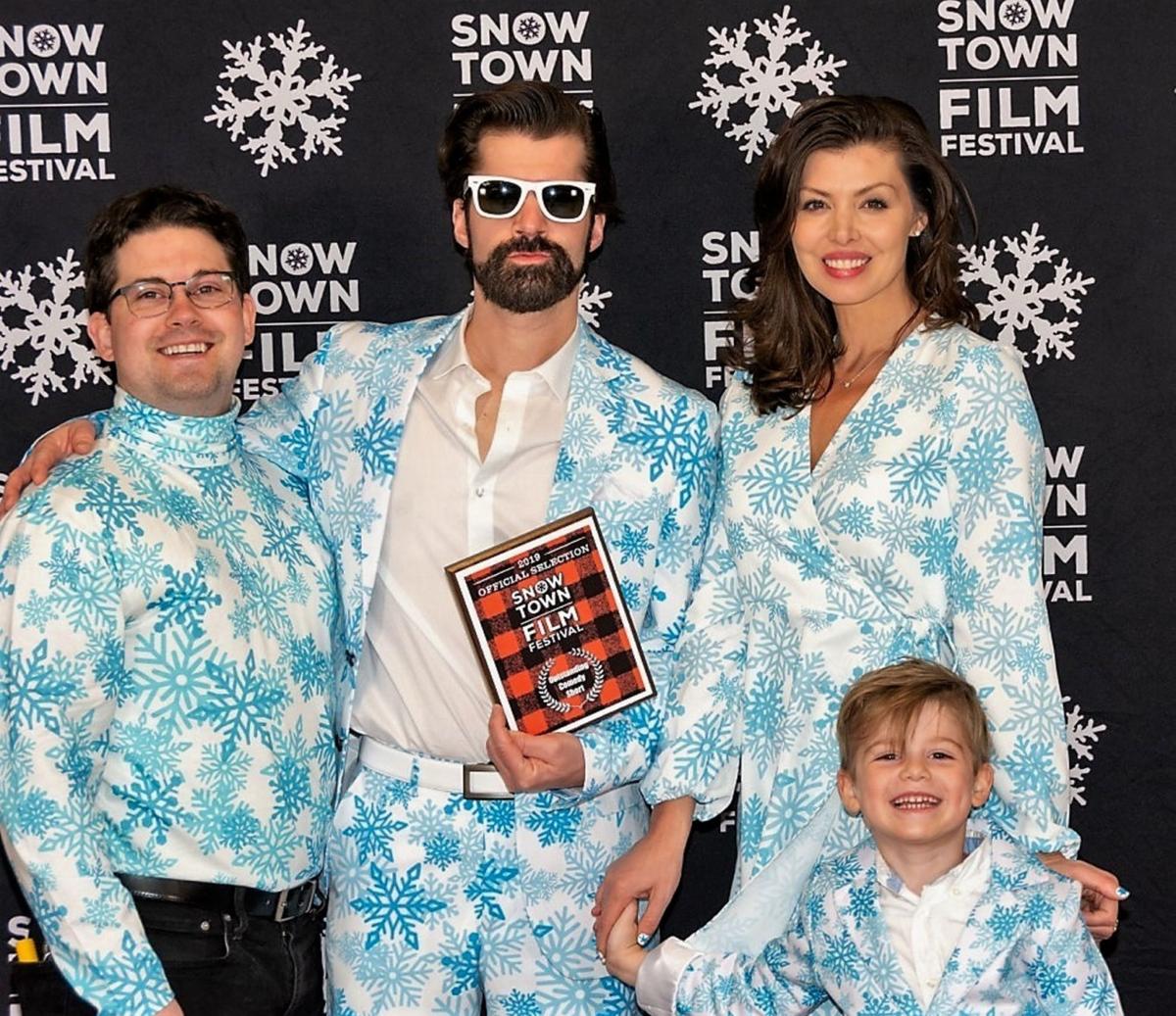 New York City filmmakers, from left, Zack Kron, Loring Murtha and actress Laura Petersen are looking forward to returning to the Snowtown Film Festival. They will show some of the short films at 6:30 p.m. Saturday. That will be followed by a panel discussion by the three. Last year they made special suits to honor the festival and here, are shown at the festival reception. With them is Mylo Bonsignore, son of Ms. Petersen, who plays the child of Linda and Gary characters in “Oh, Boy...” Courtesy of Loring Murtha 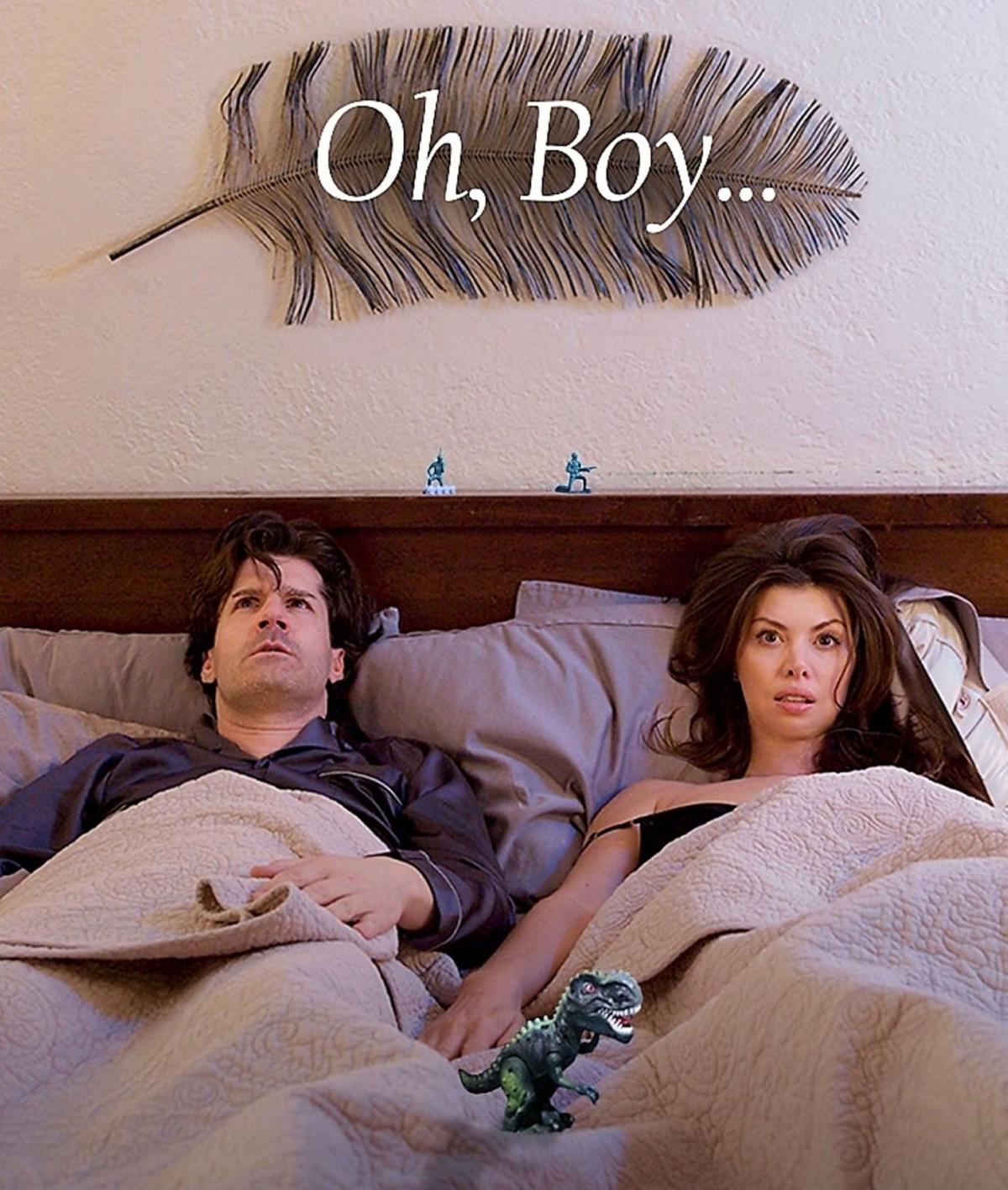 “Oh, Boy...”, a sequel to the short film “My Hero” previously shown at the Snow Town Film Festival, will be shown at this year’s festival. Martini Boy Films 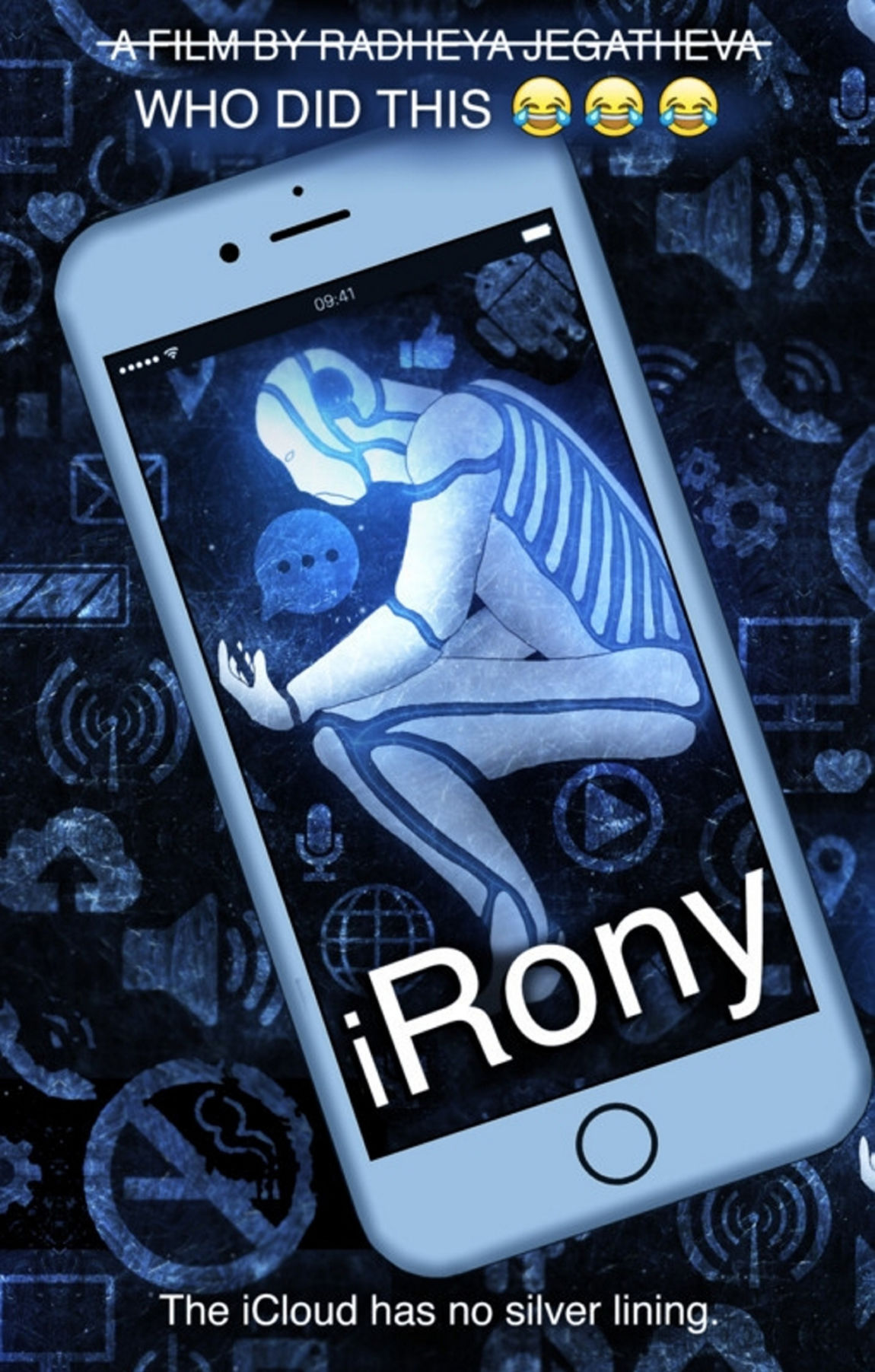 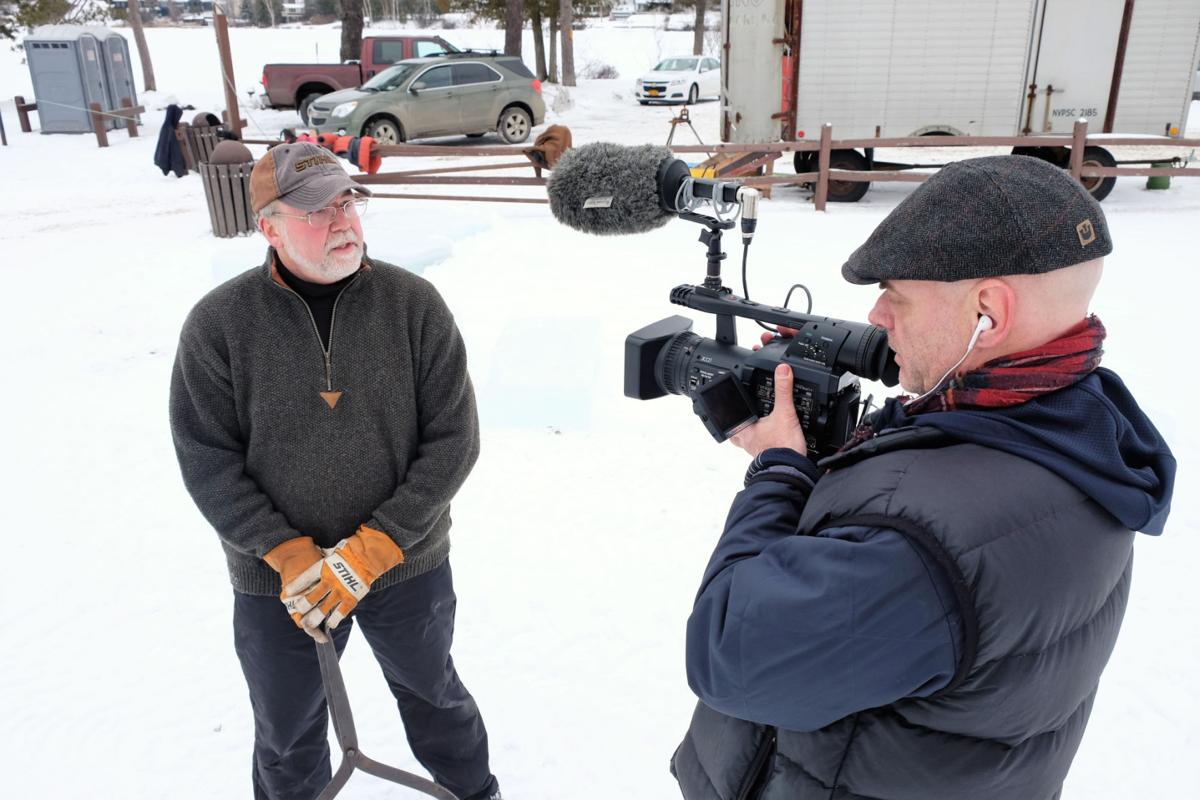 New York City filmmakers, from left, Zack Kron, Loring Murtha and actress Laura Petersen are looking forward to returning to the Snowtown Film Festival. They will show some of the short films at 6:30 p.m. Saturday. That will be followed by a panel discussion by the three. Last year they made special suits to honor the festival and here, are shown at the festival reception. With them is Mylo Bonsignore, son of Ms. Petersen, who plays the child of Linda and Gary characters in “Oh, Boy...” Courtesy of Loring Murtha

“Oh, Boy...”, a sequel to the short film “My Hero” previously shown at the Snow Town Film Festival, will be shown at this year’s festival. Martini Boy Films

WATERTOWN — A pair of New York City filmmakers who made a scene for themselves last year at the Snowtown Film Festival by wearing their original white suits featuring blue snowflakes at its opening reception will return for this year’s festival.

The suits reflected the sense of fun and verve that filmmaker, writer and actor Loring Murtha his partner and actress Laura Petersen and their filmmaking partner Zack Kron have discovered at the festival.

“It’s just a beautiful town and the people who run it are amazing,” Mr. Murtha said in a phone interview from Silvercup Studios, Long Island City, while on break on the set of the Fox crime drama “Prodigal Son,” on which he has a minor role. Mr. Murtha was also Joaquin Phoenix’s stand-in for the entire run of the filming of the smash hit “Joker,” released last year.

At 7 p.m. Friday, the 1980 mystery/psychological horror film “The Shining” will kick off the festival’s films.

More than 600 entries were submitted to this year’s festival, Mr. Hunt said.

Mr. Murtha, of the Bronx, said he discovered the Snowtown Film festival through word of mouth three years ago.

“I just sort of randomly found it and submitted to it,” Mr. Murtha said. “We were lucky enough to get in that first time we submitted and then we sort of fell in love with the festival up there. It’s just a beautiful town and the people who run it are amazing. They really make you feel welcome.”

Mr. Murtha and Ms. Petersen, of Martini Boy Films, will be on a festival panel on Saturday following a 6:30 p.m. screening of three short films they created. The filmmakers are assisted in their projects by Zack Kron, who does the filmmaking and editing. Mr. Kron, who operates By the Glass Pictures, also plans to be on the panel.

In 2018, the team’s “My Hero” short film was screened at the festival. The synopsis: “Todd and Patricia clash after an embarrassing evening out. Belief systems are challenged when the night brings an unexpected guest.” Last year, the short film “Fry Day, I’m in Love,” directed by Mr. Murtha, was accepted for the festival. The film written by Mr. Murtha and Ms. Petersen, won the outstanding comedy short prize. The “modern fairy tale” is about a down-on-her-luck single mom who finds herself on a quest for a real-life Prince Charming.

This year, Mr. Murtha and Ms. Petersen will have their film “Oh, Boy...” screened at the festival. The short film is a sequel to “My Hero.”

In “Oh, Boy...” Todd and Patricia return to reconsider some basic life choices after a few days of babysitting for some friends during a family emergency.

A third film in the Todd and Patricia series has wrapped up and awaits editing. The second film introduces new characters.

“We’re slowly trying to build a universe around the Todd and Patricia characters who are the leads in the films,” Mr. Murtha said. “They’re all fun escapism.”

Mr. Murtha was looking forward to this year’s festival and said he, Ms. Petersen and Mr. Kron hoped to bring a new fun element to it like they did last year with their showy suits.

“We do try to add a little bit of flair,” he said. “I’m not sure what we’re doing this year. We’ll do something.”

He encourages other filmmakers to submit entries to the festival, and to show up if accepted.

“I’ve been to quite a bit of film festivals,” Mr. Murtha said. “Snowtown is truly special. This is one we really look forward to. The quality of films are so great and they run it so well.”

Another New York City-based filmmaker who had his movie accepted to the festival will make the trek north to take part in it. Mark C. Burns, who was born in Watertown and who also has roots in the Adirondacks, will have his film, “Ice Palace, A Love Letter” shown at 2:30 p.m. Saturday. The 80-minute film will be followed by a Q&A session with the filmmaker. The film was produced by Yvette Tomlinson.

“Ice Palace, A Love Letter,” was shot in 2016 in Saranac Lake, where each year, an ice palace is constructed for the village’s Winter Carnival. Mr. Burns’s premiered in October at the Lake Placid Film Festival.

“When you watch the film, I think you’ll understand what Winter Carnival means to Saranac Lake and that area,” Mr. Burns said in a phone interview. “The beauty of what revealed itself to me was just how important the celebration is to that community for many different reasons, not at least of which is that winters are like eight months long up there. It really helps them break the cabin fever and turn the corner from the dead of winter to the mud season.”

One of the story lines of the documentary is that of prisoners from Moriah Shock Incarceration Correctional Facility who have been part of the ice palace construction tradition since 1963.

The ice palace tradition began in 1898, one year after the village’s first winter carnival. In the early years, ice contractors who harvested ice from Lake Flower built the palace. In the 1960s, volunteers took over the task.

Mr. Burns and his wife have often visited Winter Carnival and have taken part in its events. His great-grandparents and grandparents lived in Bloomingdale, Essex County, about 7 miles from Saranac Lake.

“My wife turned to me one day and said, ‘You should make a film about this. It’s so wild. I don’t think people know about it,’” Mr. Burns said.

“I’m always working on other peoples’ productions and this was a great chance to come out with my own story,” Mr. Burns said.

The 2016 weather, when his film was shot, added its own intriguing plot line.

“It was incredible because it was so wild,” Mr. Burns said. “The temperature shot up. It was almost 60 degrees, with driving wind and rain for three days. It was one of the hardest builds on record. They almost had to knock it down and start over.”

Mr. Burns is the son of Peter and JoAnn Burns. Lt. Peter Burns was Watertown zone commander of the state police. When Mark was 6, his family moved from Watertown to East Lansing Mich. There, his father received a master’s degree in criminal justice from Michigan State University and his mother began work as an administrator in the Lansing School District.

“Going to the Snowtown Film festival is a treat for me because I haven’t been back to Watertown for a little while,” Mr. Burns said. “I grew up there. I got my first library card at the Watertown library and I’ll never forget those lions out front there. They scared the hell out of me.”

Mr. Burns said his parents, who were sweethearts at Immaculate Heart Academy in Watertown, also plan to attend the festival, driving up from their home in Atlanta.

“I might have them up for the panel discussion afterwards because they have some memories of winter carnival,” he said.

WATERTOWN — At last year’s Snowtown Film Festival, a pair of filmmakers won the “outstanding animated short” category with a far-our concept i…