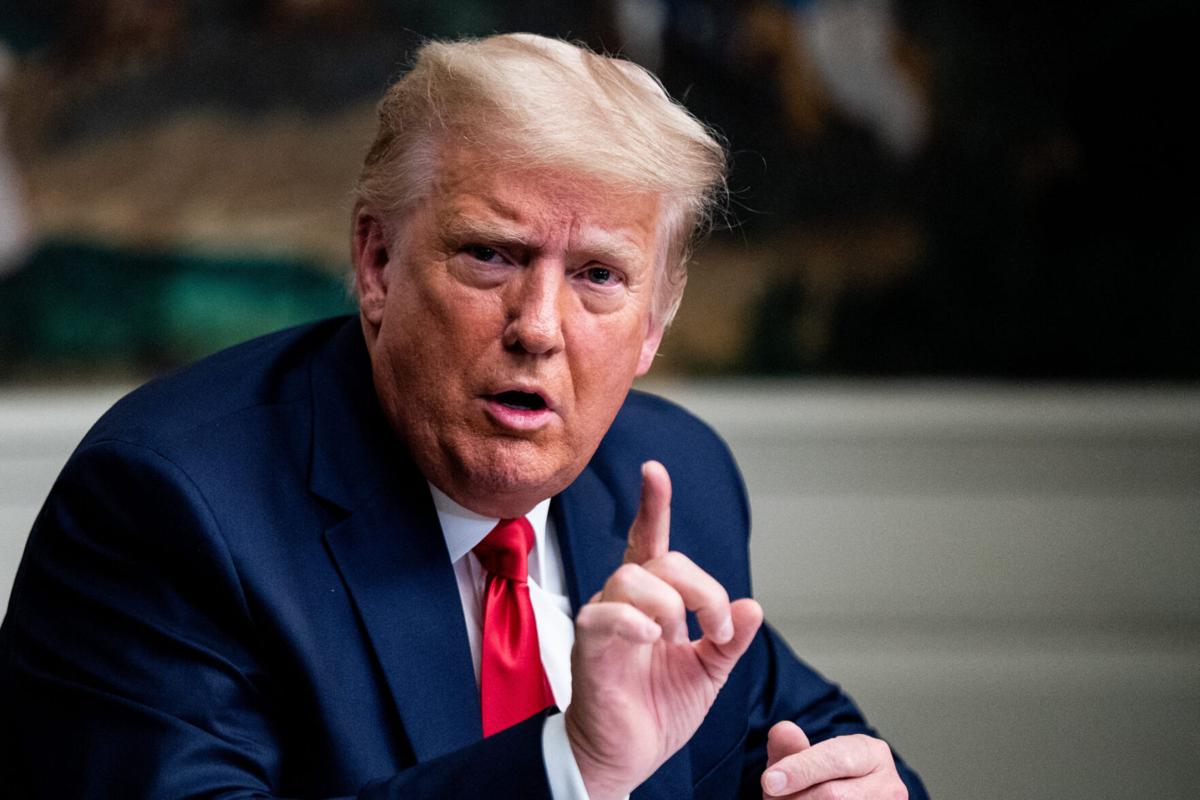 Then-President Donald Trump speaks in the Diplomatic Room of the White House on Nov. 26, 2020. (Erin Schaff/Pool/ABACAPRESS.COM/TNS) 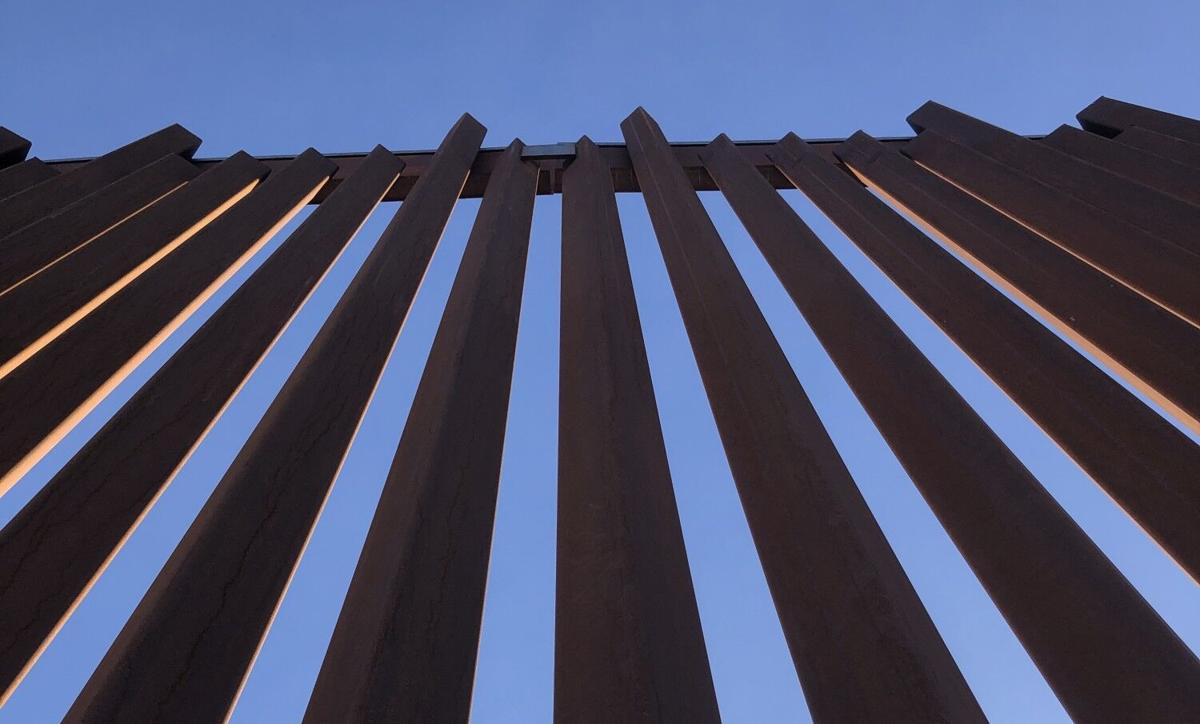 A new section of border wall constructed in a remote expanse of desert outside Yuma, Ariz., under the Trump administration. Molly O’Toole/Los Angeles Times/TNS

Then-President Donald Trump speaks in the Diplomatic Room of the White House on Nov. 26, 2020. (Erin Schaff/Pool/ABACAPRESS.COM/TNS)

A new section of border wall constructed in a remote expanse of desert outside Yuma, Ariz., under the Trump administration. Molly O’Toole/Los Angeles Times/TNS

When he was running for president in 2016, Donald Trump said he was going to build a 1,000-mile concrete wall, maybe 30 feet high, on the southern border, and that Mexico would pay for it. The idea, meant to halt gobs of illegal immigration, was outlandish, empty-headed and abandoned.

Instead, Trump admired his success in almost completing 450 miles of a wall that wasn’t much of a wall and 200 miles shorter in length than a wall finished in the Obama years. The wall’s potency is doubted, but Trump did in fact fix things to the point that it took the election of President Joe Biden to institute a fresh, inhumane, dangerous border crisis.

To start with, Biden made a move not as foolish as Trump’s dream of a wall, but close. He called for a bill legalizing America’s 11 million (maybe 22 million) illegal immigrants and offering them a path to citizenship. Despite complicating details, this is an invitation for excruciating numbers to come running, and that’s not just me talking, but a student of the subject at the Heritage Foundation.

Biden also tried to put a 100-day stop on Immigration and Customs Enforcement agents initiating the deportation of criminally involved illegal immigrants. A federal judge, caring about law and public safety, said no, and so the Biden team toned it down a bit, saying ICE could act in cases of murder, rape and recent crossings, but not much else.

Significantly, Biden ended Trump’s deal to keep those claiming to be refugees on the Mexican side of the border until judges were available. What he did as an alternative was restart catch and release, a policy setting thousands free with no judicial ruling. That meant they could maybe disappear for good after first invading small Texas cities in no way prepared to deal with them.

Put it all together with other goofs and guess what you get? Just this: a migrant surge that could be a 20-year high with 100,000 last month pouring in, many of them children coming by themselves.

These young ones, some wearing Joe Biden T-shirts, are being placed in detention centers in which, for a period, no reporters were allowed, and surely no photos. It’s nevertheless known that resources to take care of them are insufficient, and a recent Associated Press report said 10% of immigrant children in a West Texas camp were infected with COVID-19. Border guards have had to quit guarding the border to lend a hand and themselves risk infection.

To get to the border, these victims of supposed compassion mainly trek through the desert, women and girls often raped along the way. For phenomenal prices, gangsters often serve as guides, some of them toting drugs that will kill vast numbers of Americans and some of them human traffickers.

It’s often assumed that people worried about undocumented immigrants are against immigration generally. I am absolutely for legal immigration, though with more emphasis on skills our country badly needs and less on relatives. We should also take refugees judicially validated in their home countries; no one crosses the border without a passport. I am for citizenship possibilities for hard-working, long-term illegal immigrants once our borders are adequately protected and we’ve put an end to those illegally overstaying their visas.

Trump, by the way, never got Mexico to pay for any wall, but he did get them to invest large sums of money in meticulously guarding their own southern border to prevent marches northward along with harboring refugees. We need the same kind of cooperation from progressives. They must understand the danger of opening the gates to everyone who wants to come here — some 750 million people according to Gallup polls — and get it that good intentions should be accompanied by realism.

Jay Ambrose is an op-ed columnist for Tribune News Service. Readers may email him at speaktojay@aol.com.

I will give some definitions again and add in a question to guide the conversation.

Given the true definitions, not the fake news ones:

disposed to preserve existing conditions, institutions, etc., or to restore traditional ones, and to limit change

favorable to or in accord with concepts of maximum individual freedom possible, especially as guaranteed by law and secured by governmental protection of civil liberties

What are some examples where conservatives in the United States or the world worked toward increased freedom for those without it?

To speak against illegal immigration is racist. Everything is you know. To be concerned about little girls getting raped on the trek is foolish. Their mothers gave them an anti pregnancy drug so it's ok with them. To worry about drugs coming in is nonsense. It will allow the drug prices to go down so more poor people can afford them. Yes compassion and humane policies are working out well. Thank God we got rid of Trump and his racist policies.

just prior to donald trump leaving office there were more apprehensions at the southern border than at any point during the obama years. people (including jay ambrose) really need to look at the data before running their mouths.

Lots of different opinions about THE wall and how affective it would be. IMO Trump did more with his rhetoric, (lies to many) in keeping the illegals to a "minimum." People in Honduras have televisions sets and did watch Donald Trump make periodic visits to his "wall." Crazy Donald's tactics helped keep the numbers down it made them unsure how the journey would end causing many to put the trip off. We now know just talking about a wall was quite effective in suppressing the numbers. The ball is at the other end of the court and all Biden can do is say "don't come."