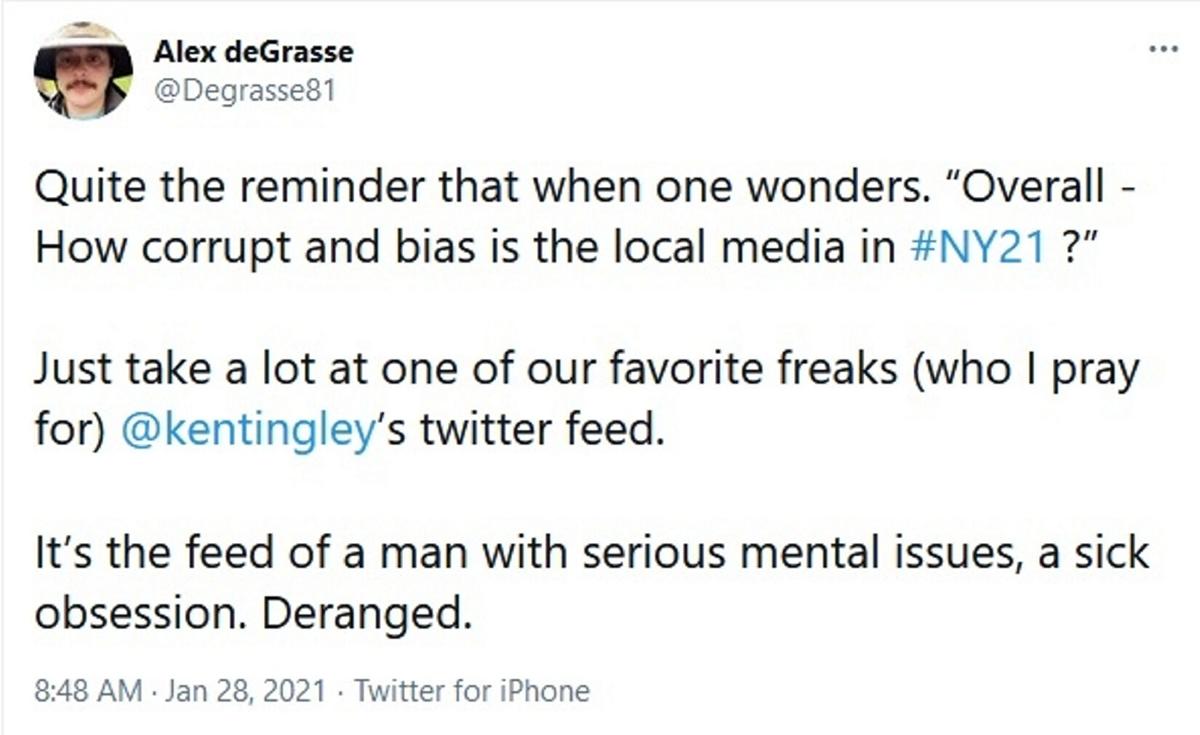 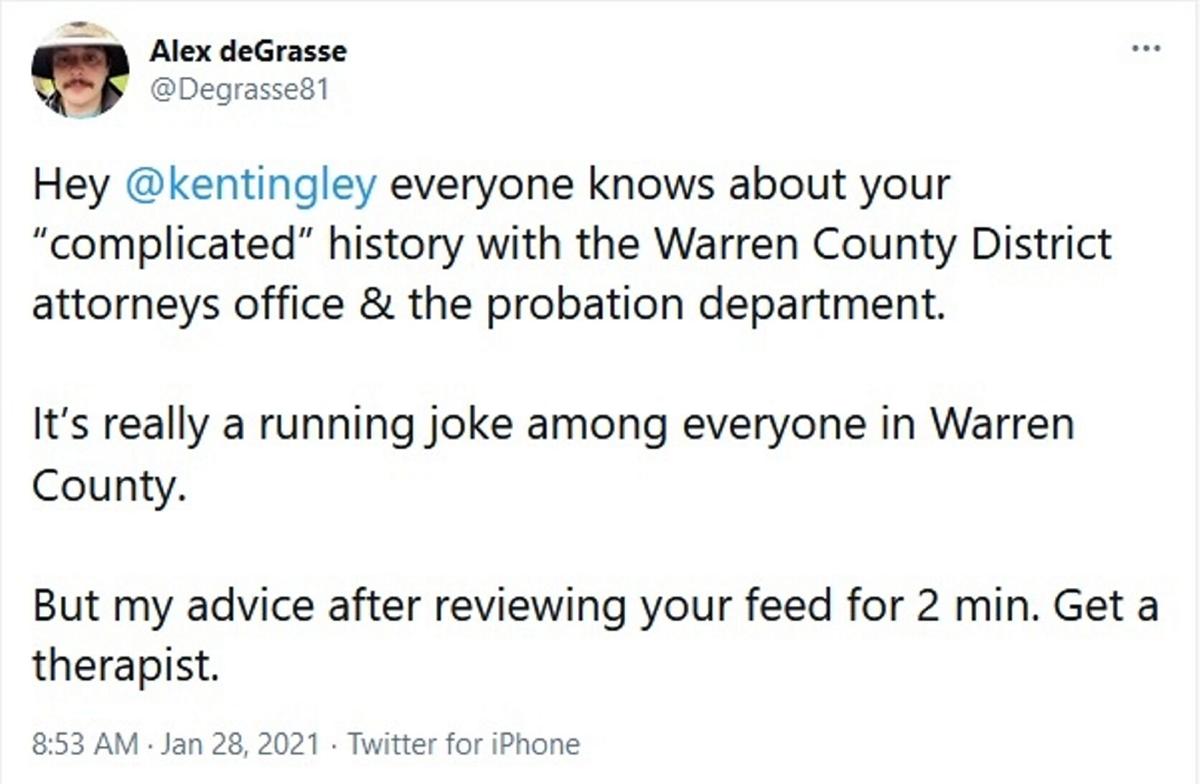 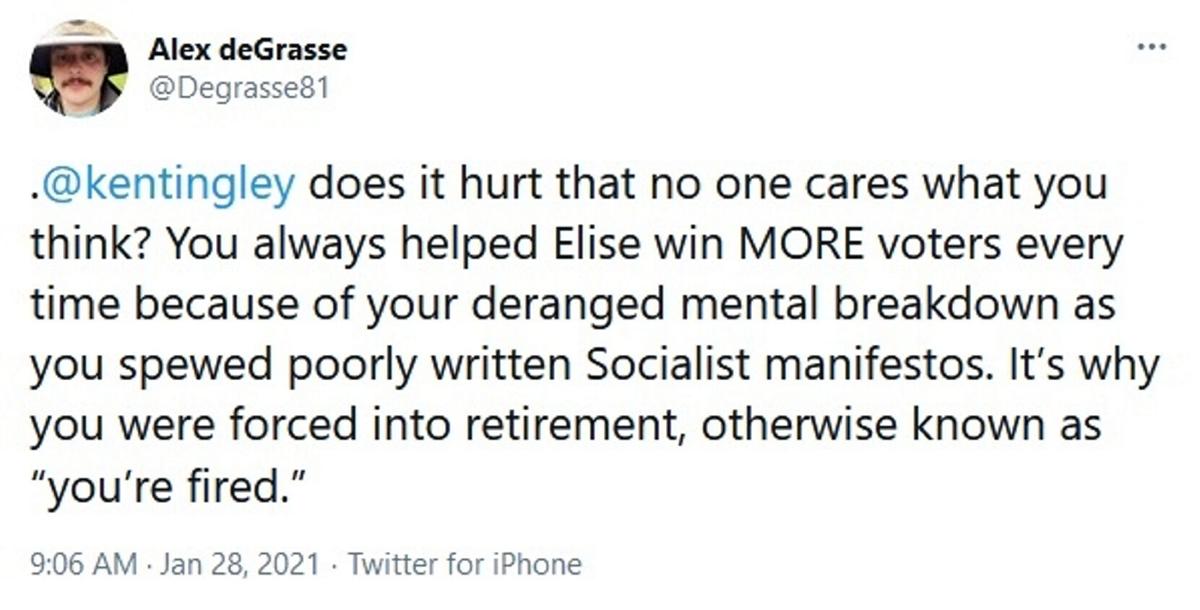 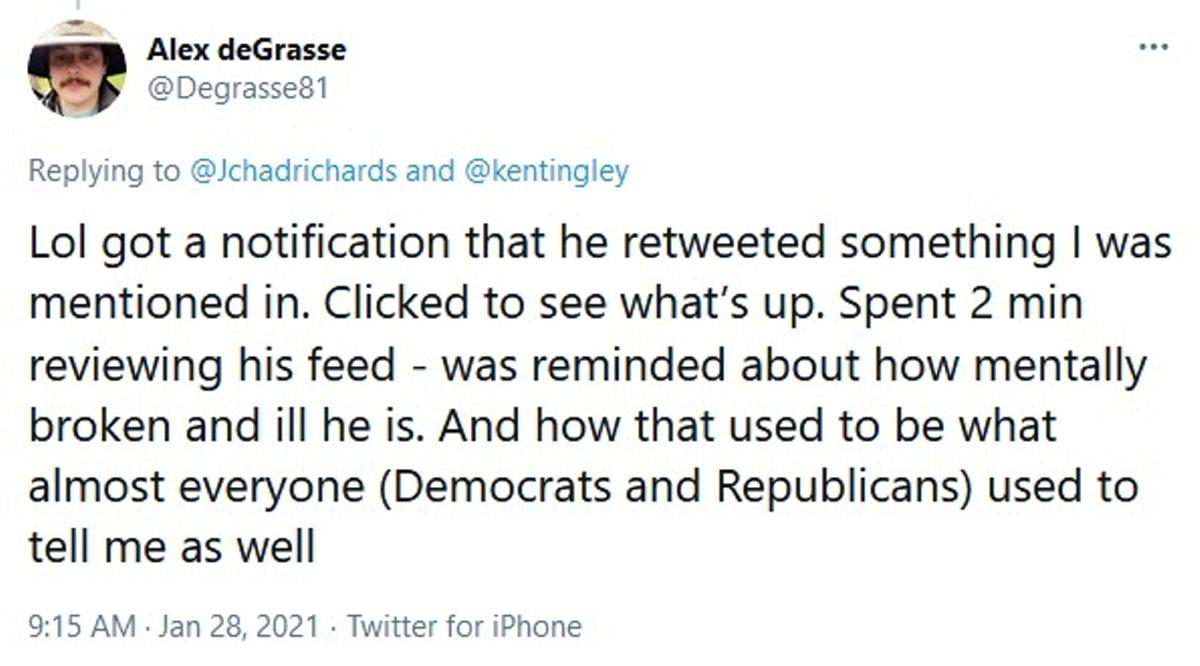 This fact raises an interesting question: How many decent people are working on behalf of U.S. Rep. Elise Stefanik’s perpetual re-election quest? The evidence suggests a frightfully small list.

Alex deGrasse, Stefanik’s senior adviser, made a journalist’s perceived mental condition the focus of his mockery last week. Ken Tingley, former editor of the Post-Star in Glens Falls, is no fan of Stefanik’s and isn’t shy about expressing his sentiments. So deGrasse took to Twitter on Thursday to declare that emotional deficiencies have led Tingley to oppose Stefanik over the years, not her reprehensible behavior.

“Quite the reminder that when one wonders. ‘Overall — How corrupt and bias is the local media in -NY21?’ Just take a lot at one of our favorite freaks (who I pray for) @kentingley’s twitter feed. It’s the feed of a man with serious mental issues, a sick obsession. Deranged.” (8:48 a.m.)

Yes, deGrasse sounds so sincere in this tweet when he claims to “pray” for Tingley — you know, the “freak.”

“Hey @kentingley everyone knows about your ‘complicated’ history with the Warren County District attorneys office & the probation department. It’s really a running joke among everyone in Warren County. But my advice after reviewing your feed for 2 min. Get a therapist.” (8:53 a.m.)

Nice use of unsubstantiated innuendo.

“@kentingley does it hurt that no one cares what you think? You always helped Elise win MORE voters every time because of your deranged mental breakdown as you spewed poorly written Socialist manifestos. It’s why you were forced into retirement, otherwise known as ‘you’re fired.’” (9:06 a.m.)

Here, deGrasse demonstrates the extent to which “no one cares” what Tingley thinks by spending a good deal of time sending out several tweets in response. Just imagine how many posts deGrasse would have fired off if he actually cared about what appears on Tingley’s Twitter feed. Let’s be honest: If no one cared what Tingley thinks, why would deGrasse be so desperate to undermine what he says?

“Lol got a notification that he retweeted something I was mentioned in. Clicked to see what’s up. Spent 2 min reviewing his feed — was reminded about how mentally broken and ill he is. And how that used to be what almost everyone (Democrats and Republicans) used to tell me as well” (9:15 a.m.)

Wow! The empathy just oozes from deGrasse’s keyboard, doesn’t it?

An individual’s mental health should not be at issue when assessing criticism he or she has leveled. Tingley raised valid concerns over Stefanik’s conduct. So for deGrasse to try to mask the controversies that have plagued her time in office by invoking mental instability is reckless and deplorable.

What would be worse? Demeaning someone who has a mental health problem, or glibly tossing that assertion around to score political points and deflect criticism?

Treating mental health so derisively diminishes its seriousness. It also reinforces the stigma against problems from which people suffer, thus dissuading them from seeking the help they need. Stefanik and deGrasse must answer for these dreadful comments, but I won’t hold my breath that they will.

I can’t conceive of another elected official in Northern New York who would tolerate a representative exploiting the issue of mental health to gain an edge over opponents. Stefanik knows about deGrasse’s appalling tweets, and she approves of them.

In defending his egregious actions, deGrasse would likely claim that his tweets represent his personal opinion and aren’t official statements from Stefanik’s office. This is a load of bunk, and here’s why.

Stefanik pays deGrasse to help boost her image with supporters. His tweets are frequently made on her behalf, so they’re part of the game she plays to blunt any honest criticism.

And Stefanik sometimes replies to his tweets, so she uses his posts to maintain her brand. If she had qualms about any of deGrasse’s comments, they’d be removed immediately.

On Thursday, deGrasse sent two tweets about correspondence that Stefanik’s office possesses from the Post-Star. In the first tweet, he wrote that “we are sitting on multiple emails …” (9:25 p.m.); in the other one, he wrote, “We will release these unethical emails. Some of which were leaked. Some of which were accidentally sent to us” (9:36 a.m.).

Who exactly does deGrasse mean by “we” and “us”? It’s obvious he’s including himself as a part of Stefanik’s congressional team and using his personal Twitter account to do so.

So in publicly revealing the office’s pending strategy, deGrasse is officially speaking for her. He earns his living as an adviser by ensuring Stefanik continues to earn her living as an elected official.

It’s incredibly sad that Stefanik has sunk to this level to maintain her popularity among supporters. Both she and deGrasse have made it clear that keeping her poll numbers as high as possible is their top priority — at any cost. Repeatedly being re-elected is the primary objective; it’s how she maintains her power.

This is why she cozied up to Donald Trump after more than a year into his presidency. She recognized how strong his appeal was among many north country Republicans, so she adopted his horrendous tactics of spreading lies and childish name-calling.

Just like her icon, Stefanik wallowed in falsehoods about the Nov. 3 general election. This helped feed the radical fringe within the GOP, which resulted in the Jan. 6 assault on the U.S. Capitol.

The violence left five dead, including U.S. Capitol Police Officer Brian Sicknick. And two other officers with the department who responded to the attack, Howard Liebengood and Jeffrey Smith, have since committed suicide.

Given this tragic turn of events, you’d expect Stefanik and deGrasse to treat the issue of mental health with a tad more sensitivity. But they view it as an effective weapon to denounce opponents and avoid accountability. Trump regularly engaged in cruelty to appease voters, and it’s disheartening to see Stefanik authorize such behavior against one of her constituents.

Jerry Moore is the editorial page editor for the Watertown Daily Times. Readers may call him at 315-661-2369 or send emails to jmoore@wdt.net. They also may follow him on Twitter: @WDT_OpEd.

I think rep Stefanik knows she cannot win her congressional seat with the votes around Watertown, NY. She has been doing well in other areas of her district and will most likely continue to do so. Go Elise and to Liz Farmer "Go Elise" means win your election in 2022.

Elise won Jefferson Co. +28. “ she cannot win her congressional seat with the votes around Watertown, NY” ??

That's hard to believe if you go by the rhetoric in the Times Stefanik should be afraid to walk the streets of Watertown. You're pretty good on numbers so I guess that fluke is so.

Jerry, your editorials and hatred for elise stefanik (and any Republican holding office basically) is sad and sickening!!! I dont know why I continue to be a paid subscriber to read such hatred. Just another example of media outlets dividing our country. Ohhh and in case you didnt know it Jerry, Elise is very popular in this district. I and many other are hoping she runs for governor or and tries to make NYS great again!!!!

good post. I don't like staffers and politicians partaking in the name calling. This was my major issue with Trump. He acted like a 4 year old. However, the MASSIVE attack on the right, from the main stream is sickening. So it isn't surprising that after being called every name in the book if you support someone like stefanik (i.e. russian, sexist, homophobe, racist, seditionist, hater, anti-martian, etc. etc. etc.) I guess this is kind of expected. So although I don't always side with Jerry, I can see his point. But, how many names can you call someone (especially when they aren't true) until someone pushes back. This is the WHOLE fault of CNN, MSNBC, twitter, etc. I mean, look on here. The times allows posters on here daily to call people names and threaten them (see the rockloper person). It's quite sad

it is amazing that the right can't handle basic criticism of stefanik. they just want propaganda that affirms their pre-existing views.

What a powerful editorial. It is right to the point of how low Elise Stefanik has gone and is willing to go. It is not hateful as some would try to deflect this right-on criticismb but truthful and illuminating.

If you say so. It must be difficult living in a deep red area of NY for you. That would explain the vitriol.

djp29, are you indifferent to, or tolerant of, tweets that publicly, and for political expediency, shame and bully a person inflicted with a mental illness? Or do such tweets run counter to your values and convictions? What's your personal take on DeGrasse's tweets?