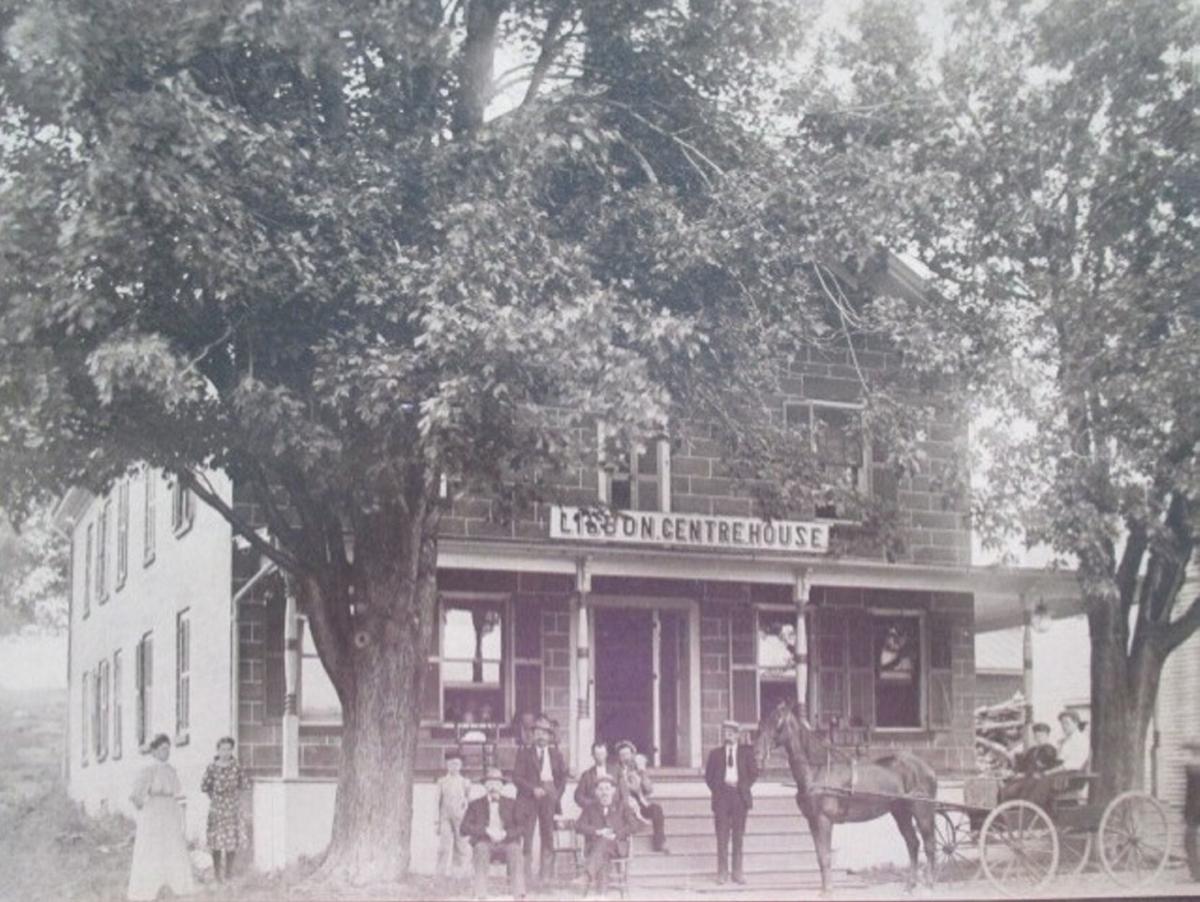 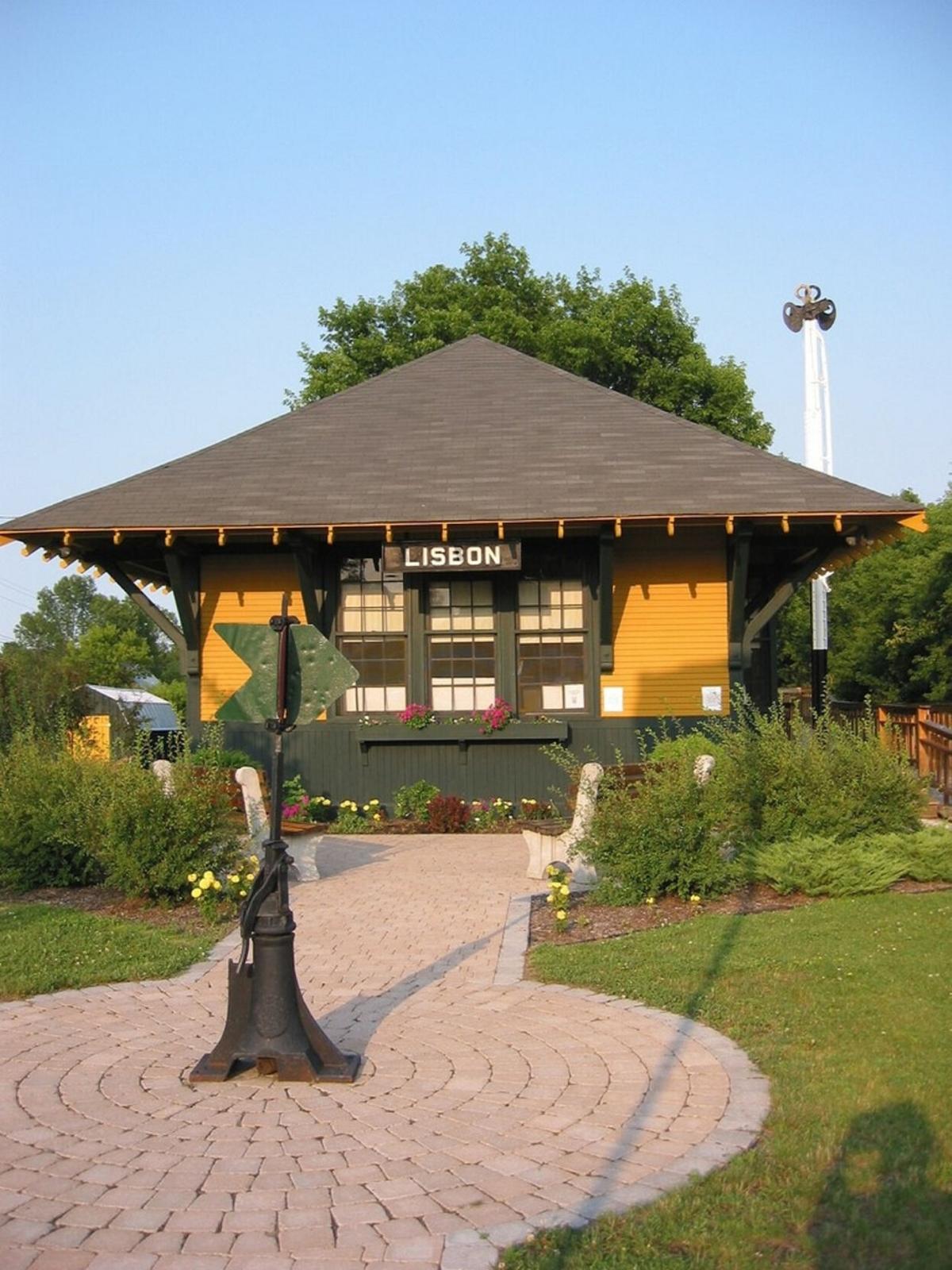 A photograph of the current Lisbon Depot Museum. Submitted photo 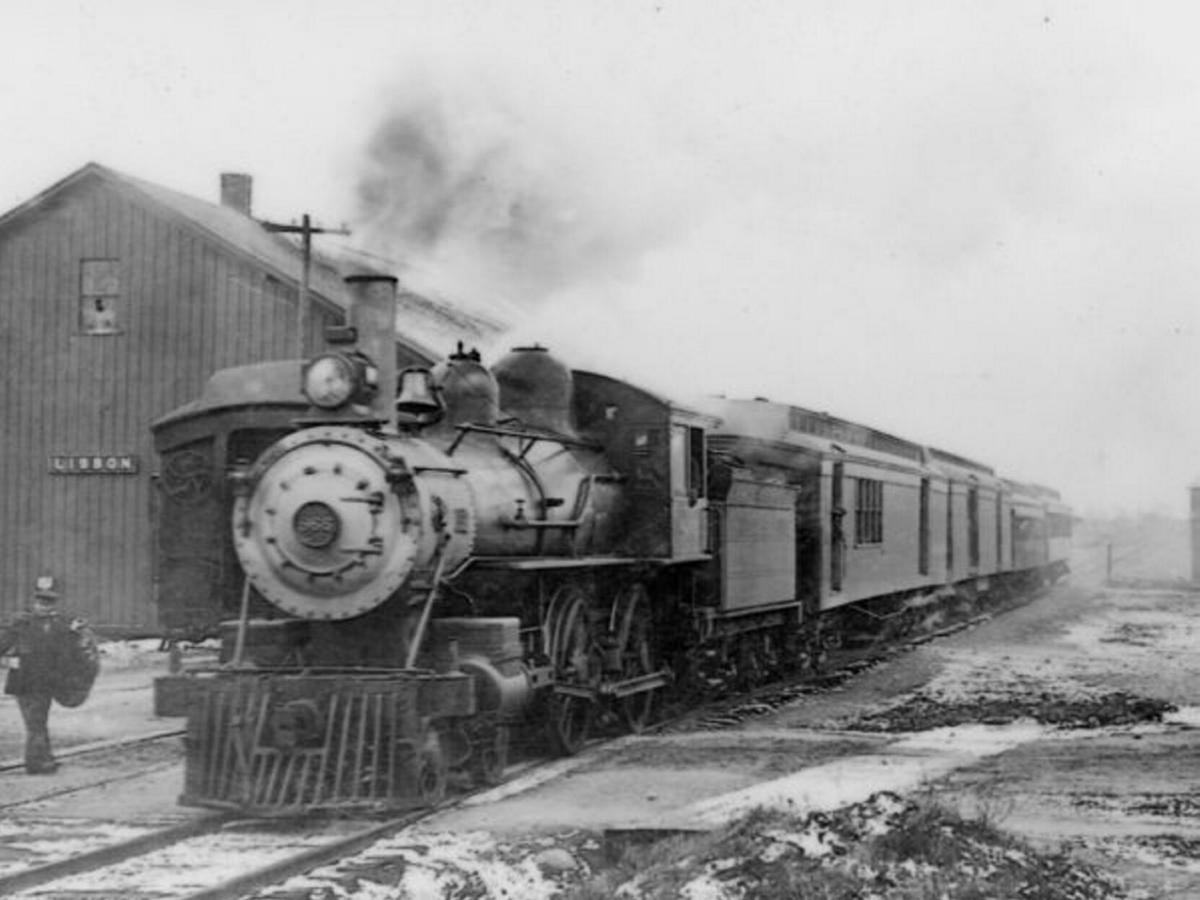 A photograph of the current Lisbon Depot Museum. Submitted photo

Lisbon, as the town was called by the mid 1800s, was centrally located at what today most know as Red Mills. By the late 1840s that was about to change. The tiny hamlet of Lisbon Centre grew up as a result of the coming of the age of the railroad to the North Country.

The first railroad to come into the area was the Northern Railroad. Samuel Wells built a small boarding house for the workers building that railroad. In 1848 he built the Lisbon Centre House. It was a large stone building that depended on the railroad workers and travelers. It served them until the railroad’s passenger service went out of existence.( At that point, the building known as the Lisbon Centre House went out of business. It became Mayne’s Feed Mill and was later owned by the Aldrich family. It eventually ended up vacant and that beautiful stone hotel was demolished by a controlled burn in 1970 by the Lisbon Fire Department.

Later in the year 1848, the Northern Railroad company constructed the depot across from the Lisbon Centre House. Both buildings were in the center of the small but growing hamlet. A store was built nearby and as business grew more shops, a blacksmith, a post office, and homes were built. The community was soon large enough to be named and the name Lisbon Centre was chosen.

The railroad company placed Joseph Robinson in charge of the depot. Joseph, his wife Drusilla, and their son lived in the back of the station and ran a mercantile (grocery) store while Joseph served as the station agent. Joseph handled the duties of station agent under three railroad companies. The Northern Railroad, which was completed in 1850 and continued to 1858. Then it was the Ogdensburg Railroad 1858- 1864 and the third was the Ogdensburg and Lake Champlain Railroad from 1864-1901. It was later named the Rutland Railroad and continued until 1961. The first depot was a large, plain wooden building. It served as living quarters for the Robinson family, the mercantile and the railroad freight transportation business. For over 100 years the railroad also provided passenger service. (1849-1953) Mr. Robinson died in 1888 serving all that time at the Lisbon Depot.

The original depot burned in 1925 and was rebuilt again. On May1, 1930, a fire broke out at the C.B. Wright feed store and burned down the station completely. It also burned the freight house, three freight cars, the section house, and the cattle yards. The station agent, William Duffy, set up a temporary office in a railroad car parked on a section of track not being used. When the current depot was completed and opened in 1931, he moved into it.

The new station handled a substantial amount of merchandise. Feed and grain was delivered to Carragher’s Mill, butter and milk products from the Sheffield Farms Creamery, coal, automobiles, and farm machinery and even homes from the Sears and Montgomery Wards catalogs arrived via rail to Lisbon Centre. Goods were also transported out of Lisbon on the train. Poultry Day was large, well-attended event each year. Poultry buyers would arrive in town to buy entire flocks and ship them to New York City. Before the invention of the refrigerator car, the birds were delivered live. Later they were harvested and prepared, mostly for holiday deliveries. Young girls would sometimes put notes with their addresses inside the birds and often would receive a letter in return.

This new station soon earned a reputation as being one of the cleanest and safest stations along the Rutland Railroad line. This was under the last station agent’s care, Milton King Sr. He served from 1941 to the day the railroad closed its doors in 1963.

The depot was used by the U.S. Army in 1943 during its war maneuvers in the area. Soldiers were transported into and out of the area on the trains. They practiced standing guard at the station in case the enemy attempted to use the rail systems. During the 1950s as the Seaway was being constructed, the station had so much business with supplies arriving by trains that a switch engine had to be built in Ogdensburg.

The Rutland Railroad fell into financial troubles and had to close in 1961 so the depot was closed as well. Milton King Senior locked the doors on the depot’s many years of rail service and the career he had faithfully served for many years. The depot was not used for many years. For a while it was used as a teen center and then as a storage building for Martin’s Feed Store. The Ogdensburg Bridge and Port Authority owned the building and in 1984 approved the lease of the depot for a Historical Society. The town leased the depot for $100 annually until 1991 when it purchased it for $6,500.

The application stated “The Lisbon Railroad Depot is architecturally and historically significant as a highly intact example of an early 20th century passenger/freight depot which is representative of the significant role the railroad played in the historic growth and development of Lisbon.” The committee was able to celebrate this occasion at the Bicentennial celebration of the town in August 2001.

Today, the Lisbon Depot Museum is much the same as it was when it was rebuilt 90 years ago. It has the original floor plan, passenger benches, station agent desk, windows, and freight room. Modern amenities had to be added along with a handicap ramp. Exhibits and displays to showcase local history and artifacts are set up each year for the public to view. Programs for school age children, concerts and even a Vermont Rail System locomotive is parked on occasion for tours.

The museum is run by volunteers and relies primarily on donations to maintain the place. The depot may have a different use from its original intention, but it is still a significant building serving the citizens of Lisbon Centre.

Please stop by and experience it for yourself.