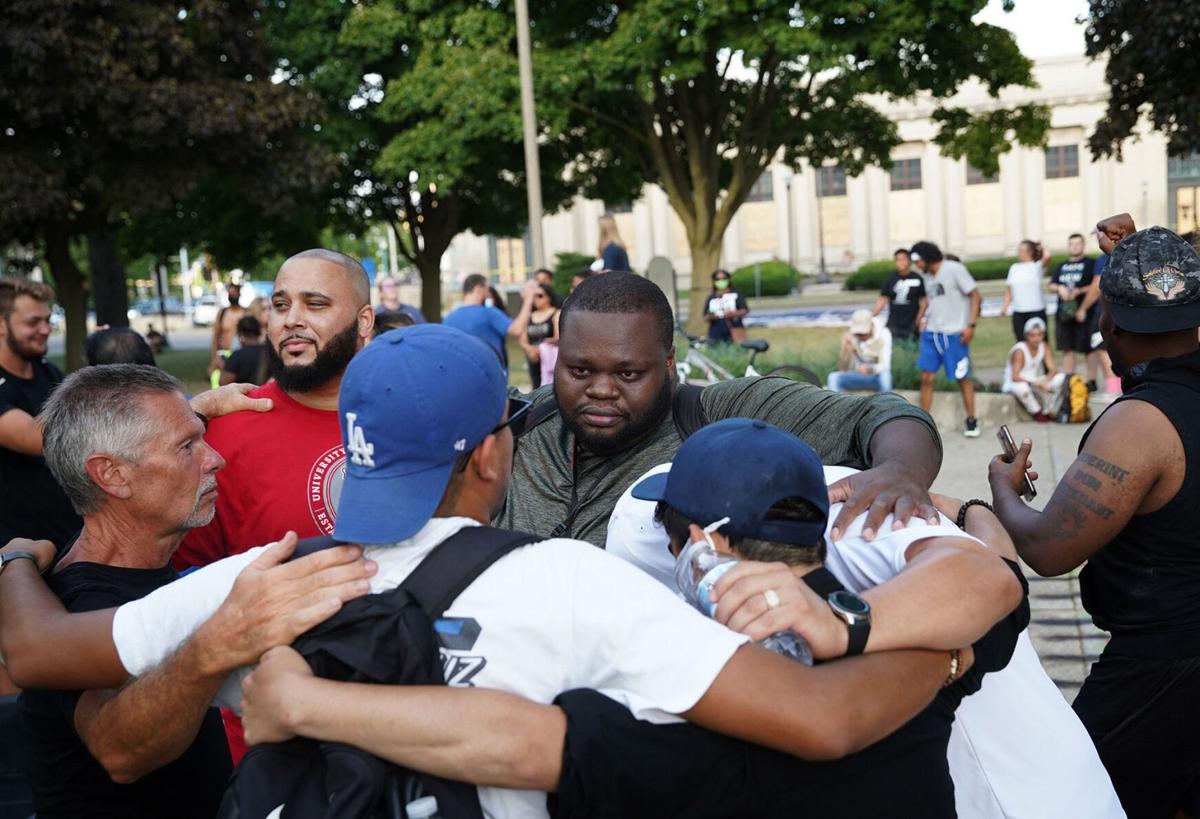 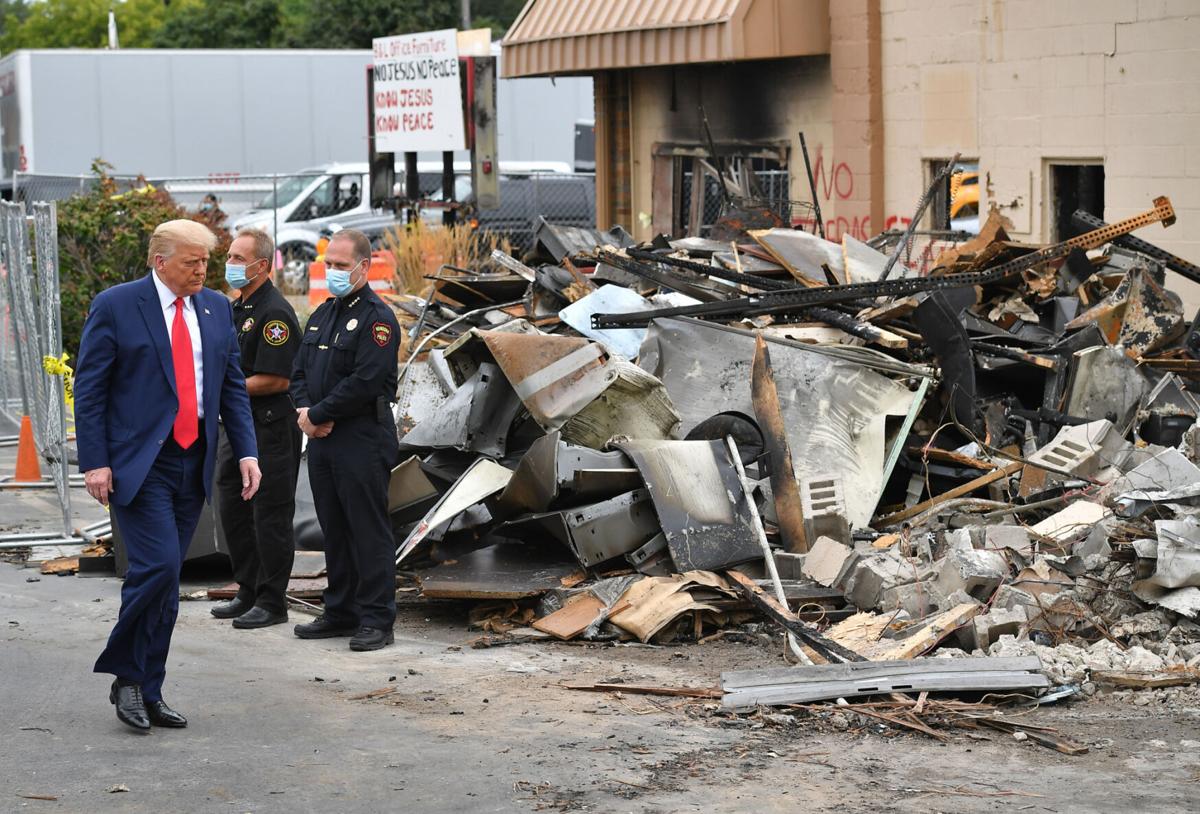 US President Donald Trump tours an area affected by civil unrest in Kenosha, Wisconsin on September 1, 2020. - Trump visited Kenosha, the Wisconsin city at the center of a raging US debate over racism, despite pleas to stay away and claims he is dangerously fanning tensions as a reelection ploy. (MANDEL NGAN/AFP via Getty Images)/TNS

US President Donald Trump tours an area affected by civil unrest in Kenosha, Wisconsin on September 1, 2020. - Trump visited Kenosha, the Wisconsin city at the center of a raging US debate over racism, despite pleas to stay away and claims he is dangerously fanning tensions as a reelection ploy. (MANDEL NGAN/AFP via Getty Images)/TNS

Kyle Rittenhouse is not a hero.

Granted, many on the right are working overtime to paint him as such. “He’s a good kid,” his attorney, John Pierce, told Fox “News” last week. “He’s a patriot,” a man who declined to give his name told Politico. “He’s a hero,” a man named Alan Endries said. But he’s not.

And the concocted tale of how the 17-year-old boy came to be on the streets of Kenosha, Wis., during a civil disturbance, how he shot three people, killing two, simply doesn’t pass the smell test. Who arms themselves with an AR-15-style rifle, leaves home and drives to another state to defend a business belonging to somebody else, a stranger to whom he has no connection? We’re asked to believe Rittenhouse and other members of a right-wing street gang styling itself a “militia” gathered in Kenosha from a sense of public spiritedness? Please. For a bigger load of equine ordure, you’d have to visit a stable. No, their purpose was clear as an angel’s conscience. They took to the streets looking for trouble. And Rittenhouse found it.

Here’s what happened, according to timelines pieced together by ABC News and The New York Times from court documents and bystander video: Protesters angered by the Aug. 23 shooting of a black man named Jacob Blake seven times in the back by a police officer took to the streets the night of Aug. 25. Rittenhouse and the “militia” were assembled at a car dealer where video shows they were quite chummy with police, who offered water and gratitude. “We appreciate you guys,” says one officer. “We really do.”

Shortly before midnight, someone, for some reason, fires a gun. Rittenhouse is seen running across a parking lot, chased by a shirtless man, whom he apparently shoots. He runs, returns, then walks away talking on a cellphone. “I just killed somebody,” he says. Moments later, he is fleeing down the street, chased by bystanders who seem to be trying to apprehend him. He stumbles and falls and while on the ground shoots two more people, one of whom reportedly had a handgun.

He walks toward police vehicles, hands up, rifle slung across his torso, as behind him, witnesses shout to the cops that he just shot people. The cops ignore him and he goes home, where he is arrested the following morning. Apparently, this armed white boy was judged to be no threat, despite all the people yelling that he was. Tucker Carlson would later rationalize all this: “How shocked are we that 17-year-olds with rifles decided they had to maintain order when no one else would?”

To recap: Before the shooting, police gave him water and attaboys. After the shooting, they let him walk right by. And Tucker Carlson is making excuses for him.

The imagination grinds like an 18-wheeler going uphill trying to conceive of an armed 17-year-old Black boy being treated with similar deference. Or even an unarmed one, like Trayvon Martin. Take it as an inducement to reconsider how we construct our narratives of innocence — and guilt. Or not.

After all, just days later, Donald Trump’s personal lawyer, William Barr (in his day job, he doubles as U.S. attorney general), opined how there “appears” to be a phenomenon where Black people “feel” they’re mistreated by police. “I don’t think that that necessarily reflects some deep-seated racism,” he sniffed.

And so it goes. We live a double standard some people call justice. Examples of its unfairness are abundant, yet abundantly denied. So beg pardon, but no, this vigilante is not a hero.

Leonard Pitts Jr., winner of the 2004 Pulitzer Prize for commentary, is a columnist for the Miami Herald, 3511 N.W. 91 Avenue, Doral, Fla. 33172. Readers may write to him via email at lpitts@miamiherald.com.

A maladjusted teenage cop-wannabe=a recipe for disaster. By now it's probably dawned on him that what he did was totally stupid.

Rittenhouse should be put to death. The Republican party is already there!

This republican nightmare has to end.

Do you agree with the decision by the Big Ten to resume its football season starting Oct. 24?