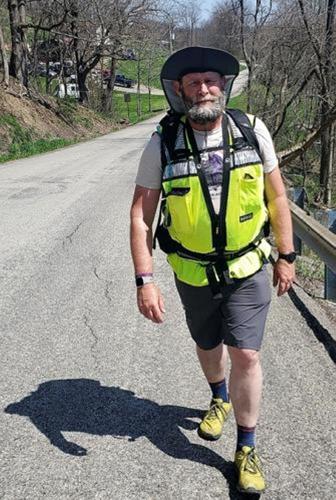 Kenneth J. Mintz is pictured April 24 during his benefit walk across the country. He entered Ohio from West Virginia that day. Facebook/Kenny Walks Across America

Kenneth J. Mintz is pictured April 24 during his benefit walk across the country. He entered Ohio from West Virginia that day. Facebook/Kenny Walks Across America

A veteran from Sackets Harbor has planted his footprint inside his heart.

Kenneth J. Mintz served in the U.S. Army for 34 years, nine of them at Fort Drum. He retired last year as a colonel.

He arrived in Washington, D.C., in early April to begin a 3,000-mile journey across the country. He wants to raise awareness of and money for three causes that are very dear to him.

The first cause is the Pancreatic Cancer Action Network. His mother died from the disease in March 2020.

His second cause, the Johnny Mac Soldiers Fund, awards scholarships to veterans and miliary family members. It has provided $25 milliion in scholarships over the past eight years. There are about 3,500 Johnny Mac Scholars attending schools throughout the nation.

Mintz’s final cause is Operation Resiliency. This organization works with veterans to help them improve their mental health and avoid suicides.

Mintz understands that his journey, called Kenny Walks Across America, will result in more than just additional funding for these causes. It will be a time of serious self-reflection. Interviewed recently by the Watertown Daily Times, he spoke of how his excursion reminds him of the adventures outlined in the “Lord of the Rings” novels.

“Obviously, a big part of the story is the journey they’re on,” Mintz said of the characters in the books, according to a Times story published Thursday. “It’s a difficult mission set before them. I think human beings in particular feel an affinity for this idea of a journey and a challenge, where you are going off to face the unknown. I’ve always loved the metaphor of a journey.”

One part of J.R.R. Tolkein narrative really resonated with him.

“[Mintz] recalled one particular scene in the third film/novel when the Hobbits return to Middle Earth after saving it from destruction. At a tavern, they reflect upon their bonds of friendship. And, as they survey their community, they realize they would never fit in like they did before, being irrevocably changed by their struggles,” the article reported. “When Mr. Mintz watches the scene, he also feels he’s ‘a stranger among the Hobbits.’ But as he walks these days on his own adventure, strangers have become friends. His plotted path is mostly through rural areas and small towns.”

Mintz’s journey will take him about seven months to complete. His walk has already began attracting attention from admirers. It’s a unique way to help groups promoting the causes that mean so much to him.

“To me, life is out in front of us and life’s for living,” he said in the Times story. “And I don’t want to really look back. I want to look forward. The journey here is part of that. Obviously, there’s a lot of self-discovery that’s going to come out of this, too. I don’t really know what’s going to happen. But it’s been pretty amazing so far.”

We applaud Mintz for deciding to shed light on organizations doing wonderful work. We hope people contribute to these groups and help them carry out their worthy missions.

How old is the vehicle you drive the most?