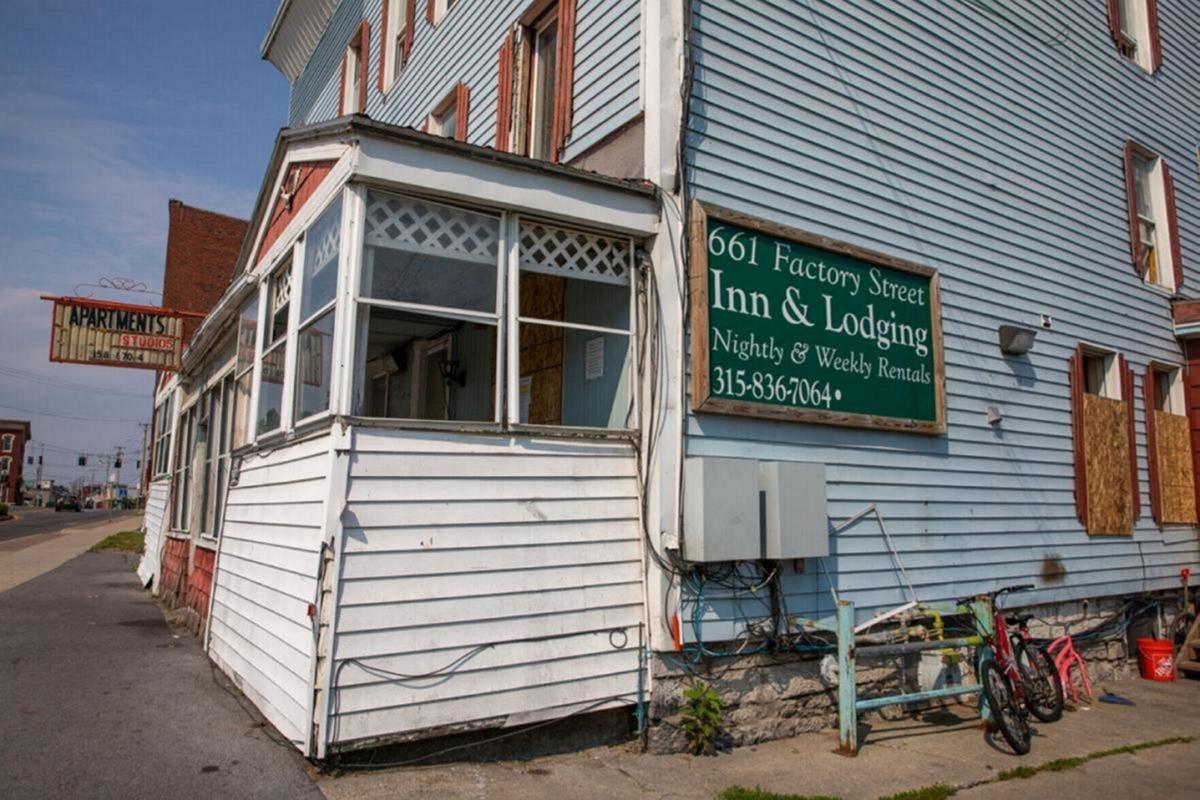 Notices were posted on the windows and doors of 661 Factory St. in Watertown after it was condemned Aug. 8. Kara Dry/Watertown Daily Times

Community representatives came up with several lists of resources while discussing homelessness in the region during an Oct. 20 housing summit at The Arc Jefferson/St. Lawrence in Watertown. Rachel Burt/Watertown Daily Times

Notices were posted on the windows and doors of 661 Factory St. in Watertown after it was condemned Aug. 8. Kara Dry/Watertown Daily Times

Community representatives came up with several lists of resources while discussing homelessness in the region during an Oct. 20 housing summit at The Arc Jefferson/St. Lawrence in Watertown. Rachel Burt/Watertown Daily Times

The closure earlier this year of 661 Factory Street Inn & Lodging in Watertown exposed the problem of people who need affordable housing. Thankfully, authorities from the region recently gathered together to discuss the issue and see if they could come up with some solutions.

On Aug. 8, the Code Enforcement Department condemned 661 Factory Street Inn & Lodging on the city’s north side. The building’s fire alarm system wasn’t working properly, and other sanitary and structural issues were cited with the 25-unit structure.

This left dozens of people without anywhere to live. Some of them camped out in tents near the apartment building on Factory Street.

Residents donated food and other items to help those who had no shelter. This attracted homeless individuals from other parts of the city as well.

Tenants said they were told by the landlord that the problems would be addressed and that they’d be able to return to their apartments on Aug. 10. But sadly, the complex never reopened. The building was put on the real estate market in September.

661 Factory Street Inn & Lodging catered to low-income tenants and was often used by government agencies to house individuals needing social services on a temporary basis. The problem with helping people in the region who fall into this category was exacerbated by the destruction of the Rainbow Motel last year and the recent closure of other local apartment buildings.

The incident at 661 Factory St. showed how complicated homelessness is in the north country. A failed fire alarm system immediately displaced about 40 people. It’s rare that food and shelter need to be found for this many people on such short notice.

On this page, we urge officials to address the concerns raised by the building’s closure. Government and social service representatives held a housing summit Oct. 20 to examine the depth of homelessness.

“The discussion was guided by Richard L. Halpin, longtime director of the Center for Community Studies at Jefferson Community College and an experienced strategic planning facilitator. Attendees took inventory of existing programming, identified gaps in services, and made plans for next steps,” according to a story published Oct. 20 by the Watertown Daily Times. “The group looked at the strengths and resources already out in the community as well as gaps in services. Those gathered hope this is one of many talks to come. It was decided that they’ll create a steering committee and smaller groups to tackle specific issues that pertain to homelessness and bring issues and solutions back to the group again for another discussion later on. Participants also discussed the apartment building at 661 Factory St. in the city, where residents were displaced and left to live in a makeshift tent city this summer.”

People who took part in the event found it helpful to meet others from local organizations and learn about the programs they offer. As representatives follow up on this summit, they’ll all have a broader understanding of what services may be lacking. This will guide policymakers in making decisions down the road.

The closure of 661 Factory Street Inn & Lodging shocked many people about how significant this problem is in Northern New York. But the fact is that people remain homeless every day here. We commend all those who participated in the Oct. 20 event and encourage them to continue with this work so that this sad reality may be confronted.

Build it and they will come. Shelter should be available for all, but it shouldn't be the responsibility of local governments. What you get then is a race to the bottom. The problem transcends local areas.