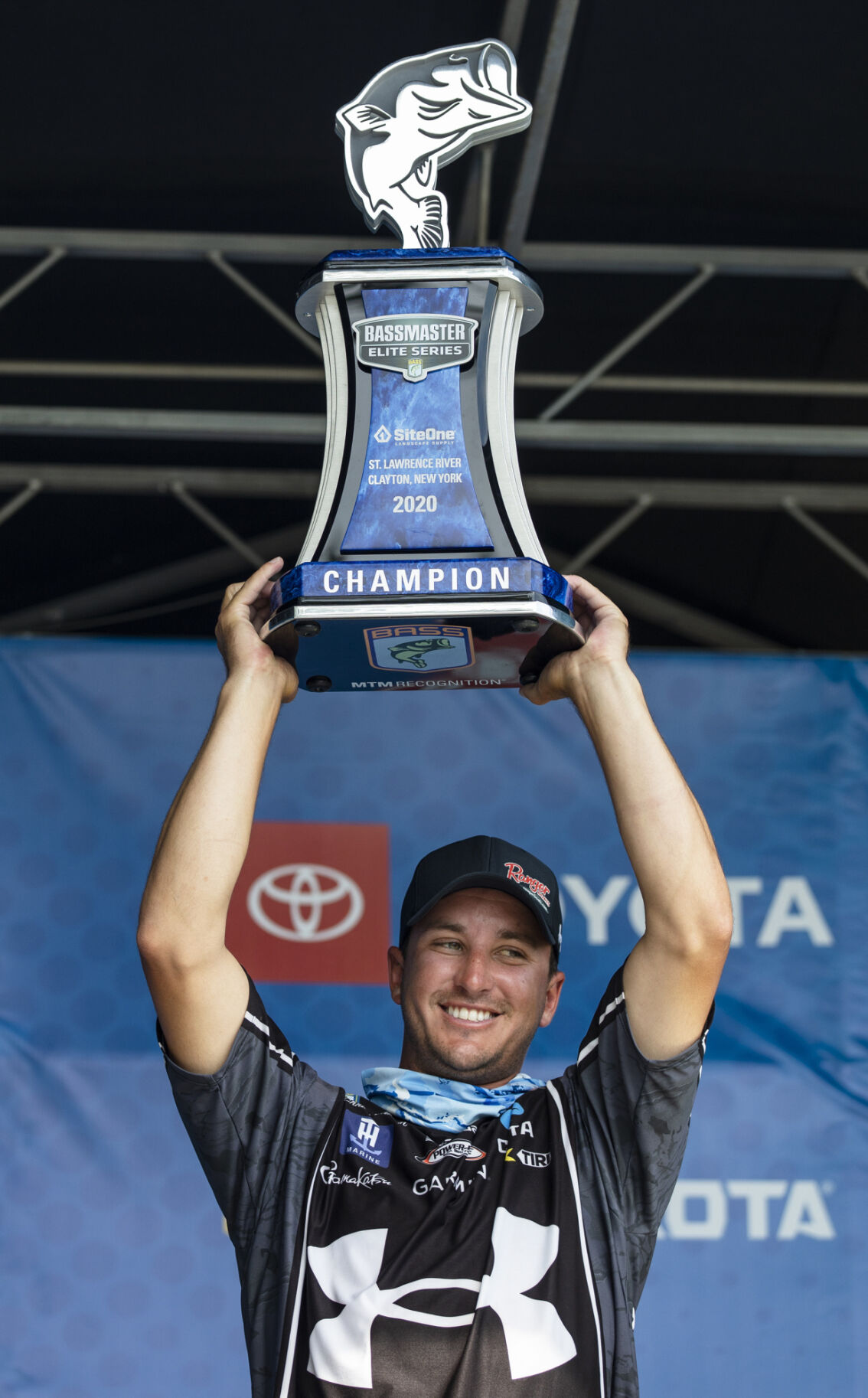 Chris Johnston of Peterborough, Ontario, holds the Bassmaster Elite Series championship trophy above his head July 26 as he becomes the first Canadian to win this tournament. This year’s event was held in Clayton along the St. Lawrence River. Sydney Schaefer/Watertown Daily Times 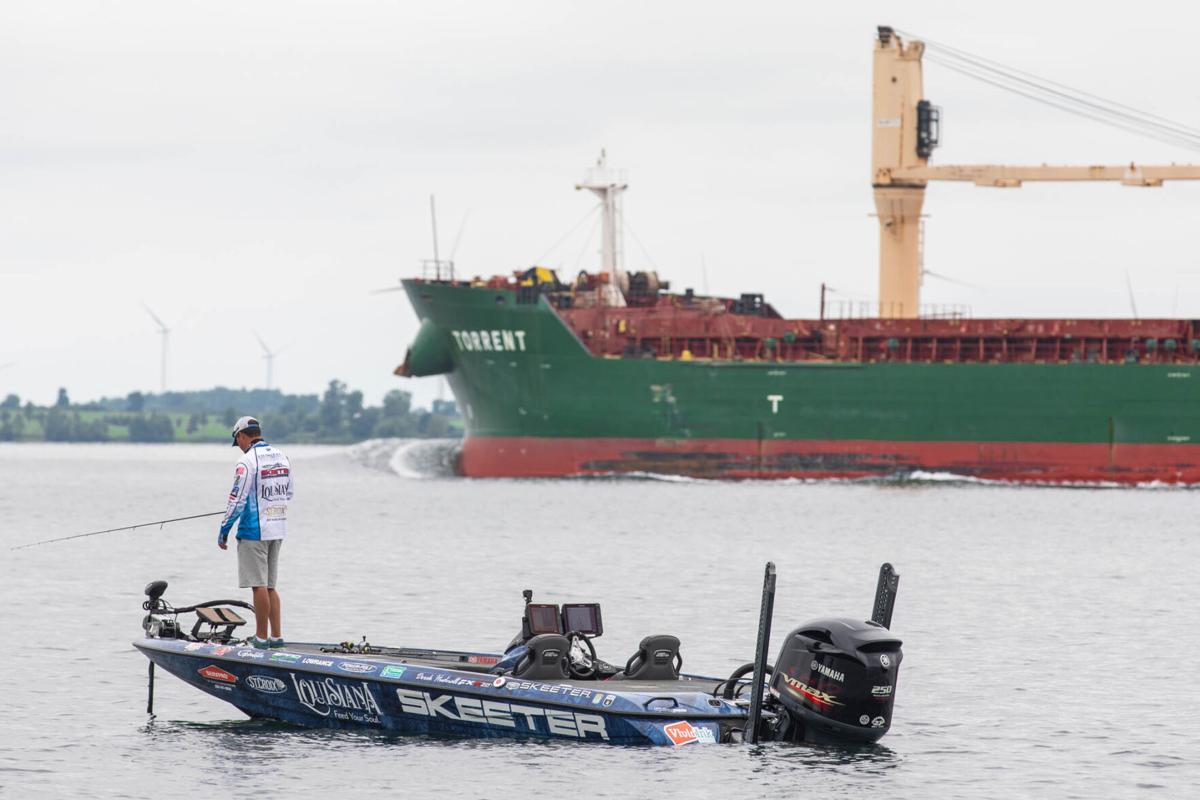 Derek Hudnall of Baton Rouge, La., fishes in the St. Lawrence River near Carleton Island as the bulk carrier Torrent, bound for Toronto, Ontario, passes in the background the morning of July 23. Mr. Hudnall competed in the Bassmaster Elite Series in Clayton. Sydney Schaefer/Watertown Daily Times

Chris Johnston of Peterborough, Ontario, holds the Bassmaster Elite Series championship trophy above his head July 26 as he becomes the first Canadian to win this tournament. This year’s event was held in Clayton along the St. Lawrence River. Sydney Schaefer/Watertown Daily Times

Derek Hudnall of Baton Rouge, La., fishes in the St. Lawrence River near Carleton Island as the bulk carrier Torrent, bound for Toronto, Ontario, passes in the background the morning of July 23. Mr. Hudnall competed in the Bassmaster Elite Series in Clayton. Sydney Schaefer/Watertown Daily Times

The Thousand Islands region took center stage last month as Clayton hosted the most prominent fishing event of the season.

The north country benefited nicely from the Bassmaster Elite Series even as the novel coronavirus pandemic prohibited the huge crowds normally associated with it. The Clayton Chamber of Commerce reported that the region took in about $250,000 from the four-day tournament.

Organizers of the Bassmaster Elite Series initially planned to hold it in Waddington, which had staged it five times since 2013. But representatives of the St. Lawrence Department of Public Health didn’t believe the stipulated safety measures were adequate. Their counterparts in Jefferson County found these procedures all adhered to state standards, so the tournament was switched from Waddington to Clayton.

This mattered little to the 86 anglers who made their way to Northern New York from July 23 to 26. They reiterated how much they love fishing on the St. Lawrence River. This will reap a rich harvest of tourists down the road.

“Chris Bogenshutz, president of the Clayton chamber’s executive committee, said the $250,000 is from the 86 anglers directly, including their purchases of food, lodging, gas and other incidentals. BASS, the organization responsible for the tournaments, said [more than] 4.3 million people tuned into the televised program on ESPN2 and projected [more than] 108.3 million people saw newspaper, TV and radio coverage of the event. Mr. Bogenshutz said he’s already heard from business owners in the region that visitors are coming to the Thousand Islands after seeing the event on TV,” according to a story published Aug. 6 in the Watertown Daily Times. “Scott A. Gray, chairman of the Jefferson County Board of Legislators, said during a board meeting on July 28 that the village of Clayton and Jefferson County are both interested in hosting future Bassmaster events. He said BASS is also interested after some anglers lauded the region for having ‘the best fishing in the world.’ … BASS is in a contract with the town of Waddington … for at least one more year. Mr. Gray and Mr. Bogenshutz both said they’re interested in bringing either the professional or the open versions of the tournament to Clayton once negotiations reopen.”

One advantage to moving the tournament to Clayton is this allowed participants to fish in Lake Ontario, which many anglers said they preferred. The largest fish caught during the event came from Lake Ontario, making Clayton a welcome host site.

Many people expressed concerns about having Clayton host the event this year. New cases of the coronavirus had been confirmed by health professionals just prior to the tournament, and some worried that bringing people from other states into the area could exacerbate the problem.

Authorities with the St. Lawrence Department of Public Health were counting on a Bassmaster event to take place in Cayuga Lake at Union Springs in the Fingers Lakes region in mid-July. This would have provided something of a buffer.

Had that event gone off as planned, participants would have gone through two rounds of testing before they came to Waddington. However, this tournament was canceled.

Losing the Cayuga Lake event resulted in anglers coming to New York state for the first time July 23. St. Lawrence County has seen more cases of coronavirus infection than any other county in the north country control room area, and there would have been no way to determine their health status before anglers arrived.

BASS arranged to have rapid tests conducted on anglers; this gave results in about 15 minutes. While St. Lawrence County officials were leery of relying on this testing method, Jefferson County officials believed it would prove safe.

And from what we can tell at this point, they were correct. The anglers followed a strict routine of isolation and social distancing, and the event didn’t appear to cause problems with the region’s infection rate.

This demonstrated that a popular event could be carried off during a health care crisis. We look forward to the Bassmaster Elite Series returning to the north country next year with the numerous fans in tow.