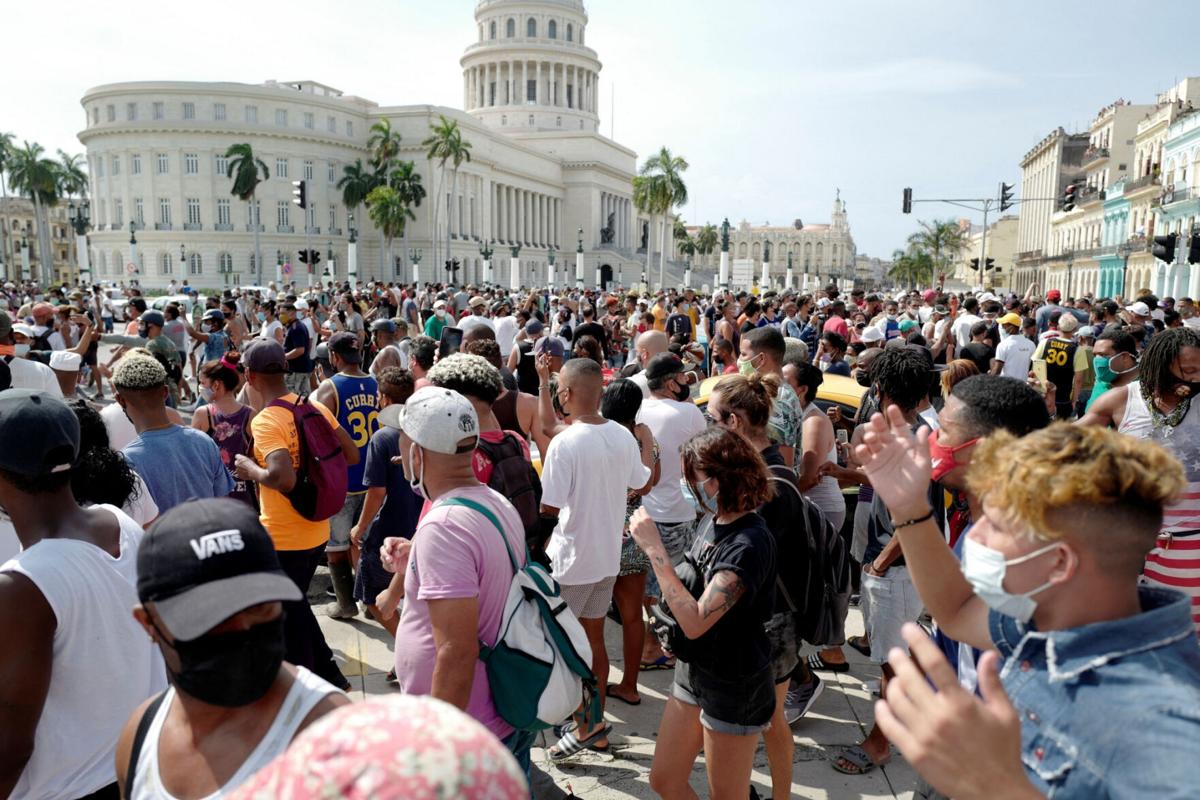 People take part in a July 11 demonstration against the government of Cuban President Miguel Diaz-Canel in Havana. Thousands of Cubans took part in rare protests that day against the communist government. Adalberto Roque/AFP via Getty Images/Tribune News Service 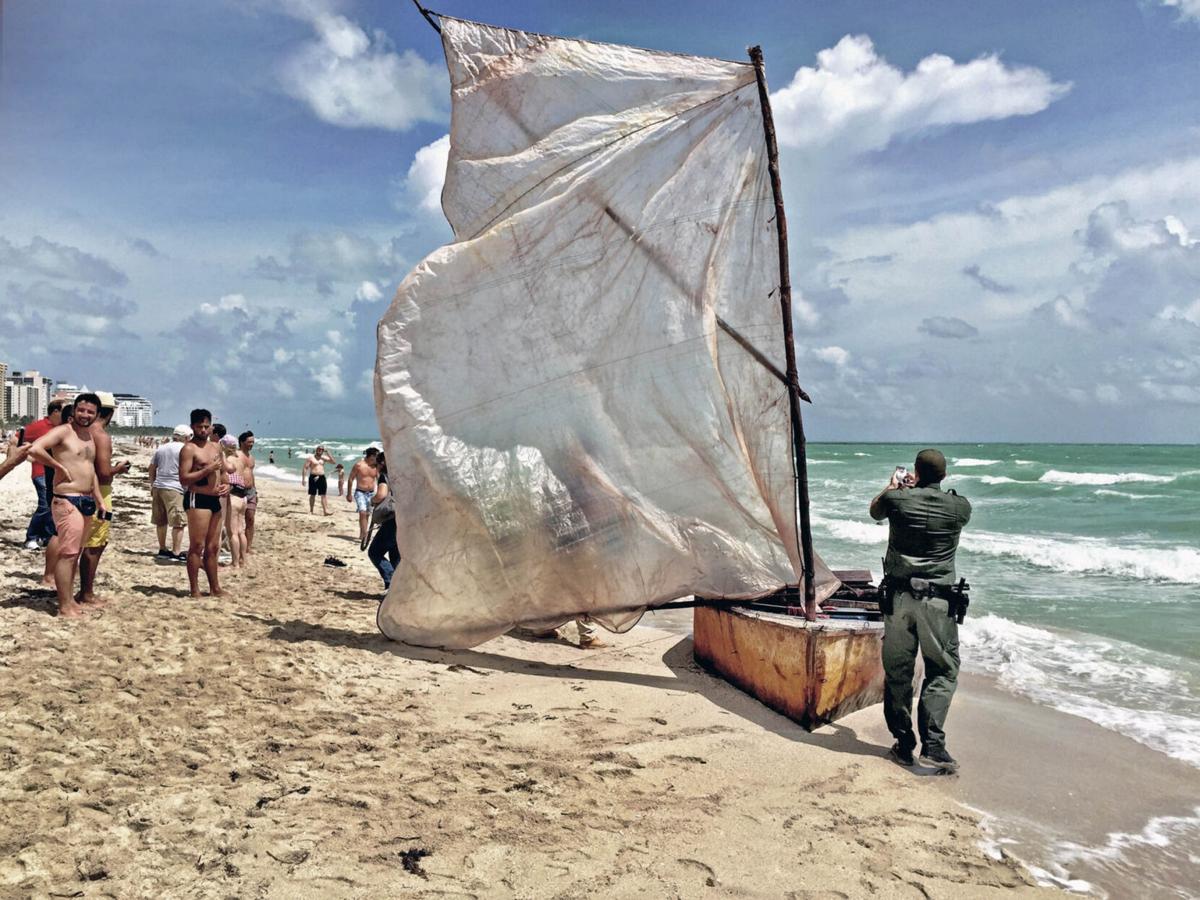 A U.S. Border Patrol agent photographs a boat with a makeshift sail that a group of Cuban migrants used to make landfall on Miami Beach on Sept. 15, 2015. C.M. Guerrero/El Nuevo Herald/Tribune News Service

People take part in a July 11 demonstration against the government of Cuban President Miguel Diaz-Canel in Havana. Thousands of Cubans took part in rare protests that day against the communist government. Adalberto Roque/AFP via Getty Images/Tribune News Service

A U.S. Border Patrol agent photographs a boat with a makeshift sail that a group of Cuban migrants used to make landfall on Miami Beach on Sept. 15, 2015. C.M. Guerrero/El Nuevo Herald/Tribune News Service

Under specific conditions, foreigners may remain in the United States permanently through refugee or asylum status by presenting a legitimate case of potential harm if they return to their home countries.

Decisions concerning who gets to stay here are sometimes muddied by our various immigration policies. Authorities must ascertain who has a genuine case as a refugee and who doesn’t.

“Under the Immigration and Nationality Act, a refugee is an alien who, generally, has experienced past persecution or has a well-founded fear of persecution on account of race, religion, nationality, membership in a particular social group or political opinion,” according to information from the U.S. Department of State. “Individuals who meet this definition may be considered for either refugee status under Section 207 of the INA if they are outside the United States, or asylum status under Section 208 of the INA, if they are already in the United States. Since the passage of the Refugee Act in 1980, which incorporated this definition of refugee into the INA, the United States has admitted more than 3.1 million refugees.”

Of course, neither the federal government nor state and municipal governments have unlimited resources to welcome as many immigrants into the country as can cross a border. Managing the different policies affecting this process can be complicated.

But given the dire situation many people from other parts of the world confront, welcoming refugees here remains a priority. Time and again, we’ve witnessed the horrors of what happens to certain groups of people denied entry someplace on humanitarian grounds. U.S. society is sustained and repeatedly rejuvenated by new generations of immigrants; this is one of the noblest aspects of our history.

Recent demonstrations in Cuba indicate that a growing number of people there desire more freedom. They protested against a shortage of food and medicine as well as the government’s response to the novel coronavirus pandemic.

This is a major development, and it should be a welcome sign of potential change within this oppressed nation. The communist regime of Fidel Castro and his brother Raúl has dominated Cuba with an iron fist for more than 60 years. This has been the largest uprising there in 27 years.

The United States previously allowed Cubans to apply for refugee status if they arrived on U.S. soil by any means. This included by boat if they weren’t turned back by U.S. forces before reaching U.S. territorial waters.

But the Obama administration ended this policy in 2017; no Cubans would be allowed to remain in the United States if they arrived by boat — even if they made it to U.S. soil. This meant that Cubans had to get here either on foot or via airplane.

That can be incredibly difficult. The closest country to Cuba other than the United States is Mexico; it’s about 140 miles from the western tip of Cuba to Cancun. Cuban refugees would then need to make it all the way to our southern border by land or fly here if they could.

On the other hand, it’s about 90 miles from Havana to the Floridian island of Key West by water. Traveling by boat is perilous. But for many Cubans, it’s their only option for getting to the United States and improving their lives.

The federal government should restore what was called the Wet Feet/Dry Feet policy of permitting Cubans to seek asylum. This could put the right kind of pressure on officials in Cuba to give their citizens more freedom.

We have long cast our nation as a beacon of liberty to the rest of the world. With a tyrannical government less than 100 from our shores, we must allow that beacon to shine brighter and help those suffering under its grip.

How about no carve outs? One consistent refugee policy. Among other standardizations. Any time you have a complicated quilt of special carve outs you know there's corruption involved.

It's different this time.

Today's generation of Cuban dissidents won't be fleeing Cuba in search of asylum. They'll remain in Cuba, fighting for rights and opportunities to prosper.

Obama stopped the policy because he knew Cubans tend to vote Republican. Ergo Biden, it ain’t gonna happen. The people need to fight for their freedom without the help from Biden. Really unfortunate.