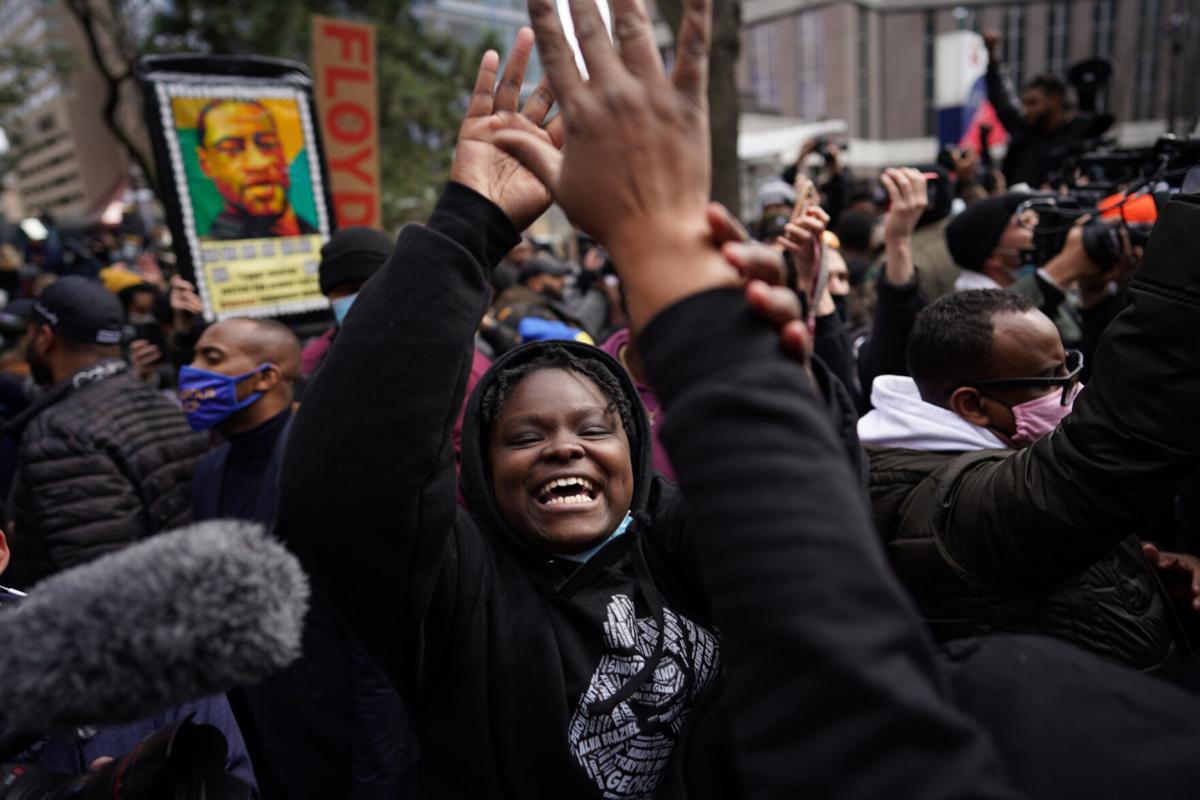 People at the Hennepin County Government Center in Minneapolis react Tuesday to the news of a guilty verdict in the trial of former police officer Derek Chauvin in the killing of George Floyd. Jeff Wheeler/Minneapolis Star Tribune/Tribune News Service 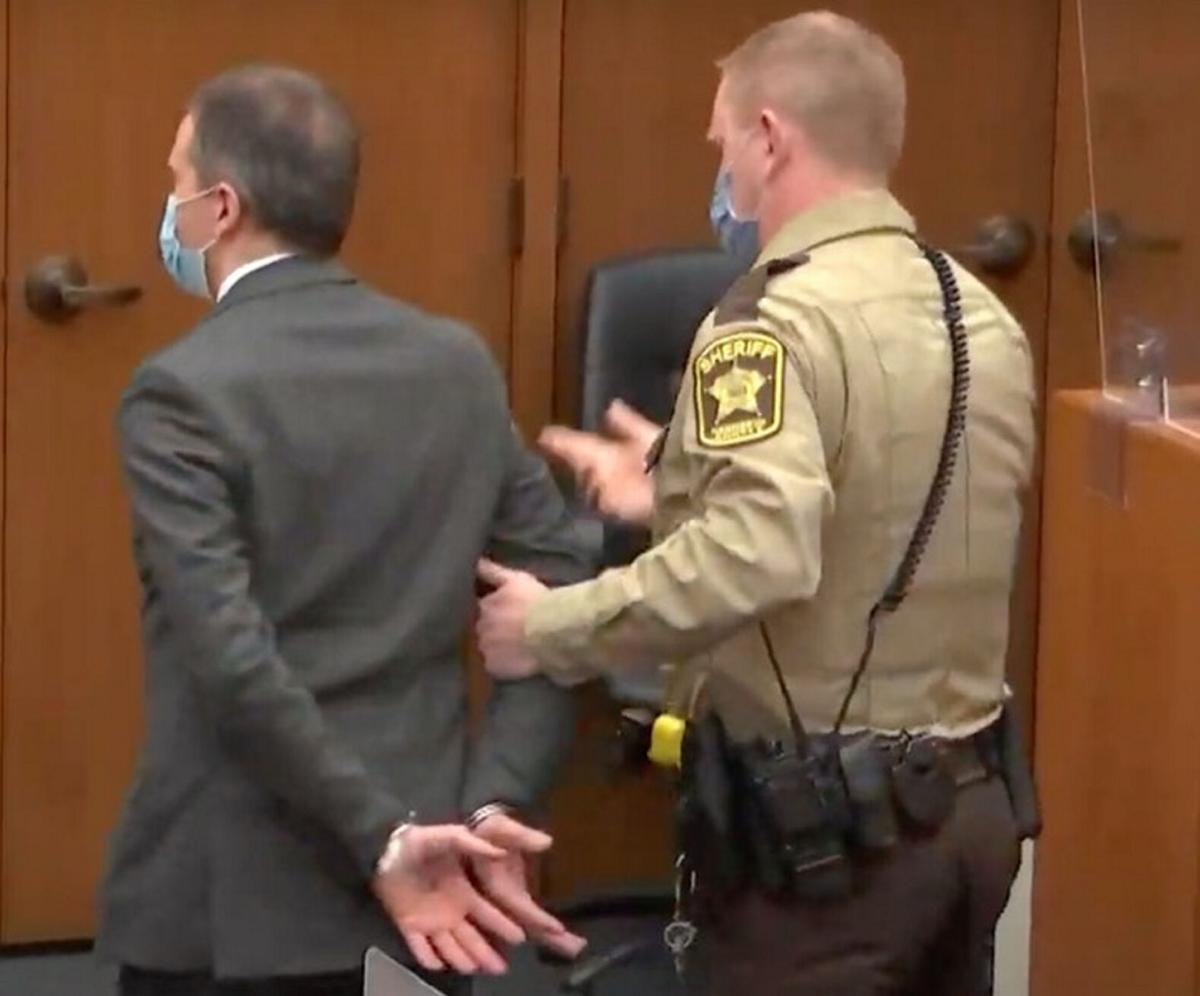 Derek Chauvin is placed in custody Tuesday at the Hennepin County Courthouse in Minneapolis after his guilty verdict was announced, in an image from Court TV. Chauvin was charged in the May 25 death of George Floyd. Court TV/Pool/Tribune News Service

People at the Hennepin County Government Center in Minneapolis react Tuesday to the news of a guilty verdict in the trial of former police officer Derek Chauvin in the killing of George Floyd. Jeff Wheeler/Minneapolis Star Tribune/Tribune News Service

Derek Chauvin is placed in custody Tuesday at the Hennepin County Courthouse in Minneapolis after his guilty verdict was announced, in an image from Court TV. Chauvin was charged in the May 25 death of George Floyd. Court TV/Pool/Tribune News Service

George Floyd’s death on May 25 in Minneapolis exposed additional divisions in our society.

The tragedy confirmed long-held sentiments that criminal justice is not administered fairly when it comes to race. It further deepened many people’s conviction that some policing procedures are seriously flawed and need reforming.

This incident raised questions about the value of public protests when they result in violence and vandalism. How should we hold individuals accountable if we believe their harsh rhetoric has possibly led to others being victimized?

Most importantly, the story of what happened to Floyd challenged our assumptions of whether police officers will face the consequences of their actions when they cause someone’s death. We’re again left to ask how to best ensure public safety without such a great risk of fatalities.

As an officer with the Minneapolis Police Department, Derek Chauvin had Floyd pinned to the ground and handcuffed. He held his knee on Floyd’s neck for more than 9 minutes.

Investigators had determined that this caused Floyd’s death. Chauvin was dismissed by the department shortly thereafter.

The guilty verdict brought a sense of relief to many Americans. They expressed concern that the death of another unarmed Black man by police would again be swept under the rug.

Protesters participated in numerous demonstrations across the country since May 25, some of which grew violent. Activists demanded that action finally be taken on the many cases of police brutality they’ve documented over the years.

Gov. Andrew M. Cuomo directed municipal police departments throughout the state to develop a policing reform plan. Let’s hope that at least some of them took this task seriously and devised ways to modify public safety strategies. Police officers need to be able to protect themselves from dangerous suspects, but all citizens deserve to believe they’ll be safe when encountering law enforcement agents.

This incident also encouraged some communities to consider ways to relieve police officers of the burden of responding to virtually every call for assistance. Reinvesting in a broader range of social services may resolve some of the issues that officers aren’t necessarily trained to address.

We must continue to examine disparities in how criminal justice is dispensed among people of differing demographics. Black and Hispanic people often find themselves prosecuted much more frequently for certain crimes than whites do, despite the fact that all groups engage in these acts in proportionally similar numbers.

Floyd’s death last year once again compelled us to focus on the stain of racism in our society and how it affects all our lives. How can we reduce inherent bias in the decision-making process on the part of representatives of the government?

Chauvin’s guilty verdict won’t bring Floyd back to life. But hopefully it will serve as a turning point for holding law enforcement agents more accountable for their actions. Let’s dedicate ourselves to enhancing public safety in ways that leave police officers and the people they encounter better protected.

He was convicted only because the police cut him loose. They threw him under the bus because he threw them under the bus first. He was wrong because he committed his murder in light of day, knowing cameras were watching. That's absolutely unacceptable behavior.