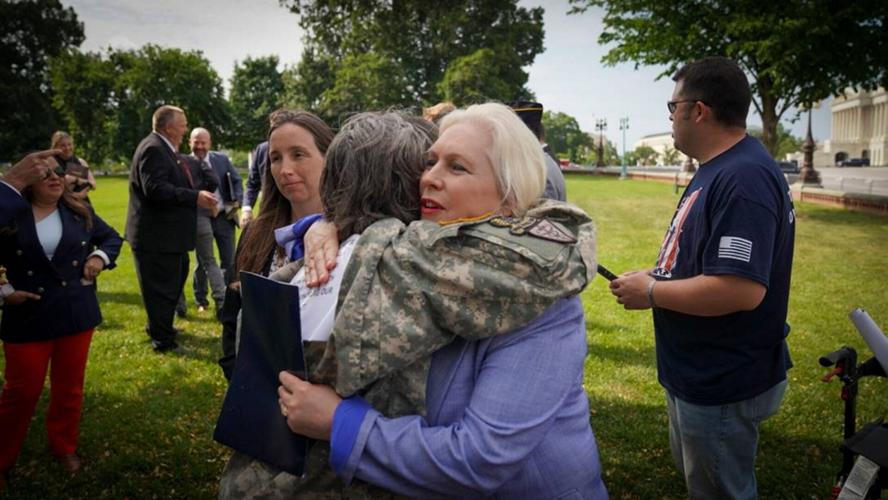 U.S. Sen. Kirsten E. Gillibrand, second from right, hugs Susan Zeier in response to news that the U.S. Senate on Thursday passed the Sgt. First Class Heath Robinson Honoring Our PACT Act. Zeier is the mother-in-law of the late Heath Robinson, an Ohio veteran who died in 2020 at the age of 39 from lung disease resulting from his exposure to toxic material in burn pits. Photo courtesy of the office of U.S. Sen. Kirsten E. Gillibrand 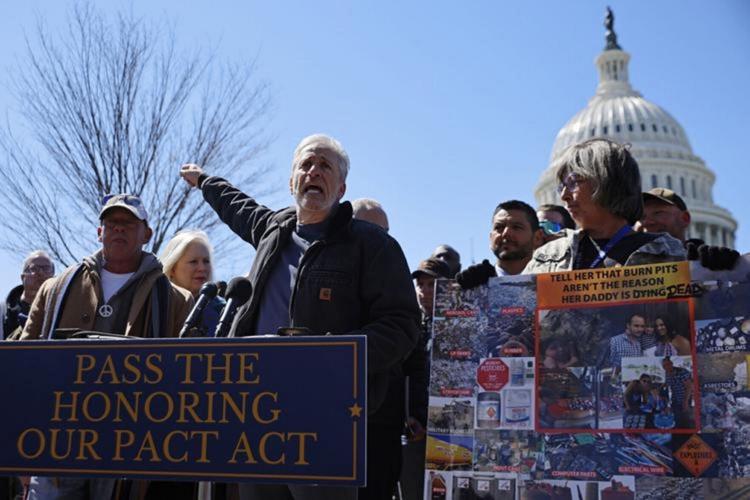 U.S. Sen. Kirsten E. Gillibrand, second from right, hugs Susan Zeier in response to news that the U.S. Senate on Thursday passed the Sgt. First Class Heath Robinson Honoring Our PACT Act. Zeier is the mother-in-law of the late Heath Robinson, an Ohio veteran who died in 2020 at the age of 39 from lung disease resulting from his exposure to toxic material in burn pits. Photo courtesy of the office of U.S. Sen. Kirsten E. Gillibrand

One big obstacle has been removed for military veterans seeking to obtain treatment from illnesses they believe resulted by exposure to toxic material when they were deployed abroad.

The U.S. Senate on Thursday passed a bill to expand health care benefits to veterans suffering from conditions caused by what they breathed in from burn pits while on military posts in Afghanistan and Iraq. The legislation would reduce the red tape many veterans have encountered in filing claims.

“The bill eases and expands access to health services and disability benefits for veterans who were exposed to toxic smoke from the U.S. military’s use of burn pits on foreign bases until the mid-2010s. If enacted into law, the bill would cost an estimated $180 billion over the first four years,” according to a story from Reuters published Friday. “It would benefit nearly 3.5 million veterans who developed cancer and other illnesses after being exposed to fumes from pits that sometimes were as large as a football field. The pits were used to burn waste including plastic tires, batteries, explosives, human feces and chemicals.”

U.S. Sen. Kirsten E. Gillibrand, D-N.Y., has been a strong proponent of this bill. Last year, she introduced legislation with U.S. Sen. Marco A. Rubio, R-Fla., to address the issue. Gillibrand released this statement last week:

“Our servicemembers and their families give everything for our country. And as a nation, we promise to care for them when they come home. At last, we are honoring that promise and paying the price we owe them for our freedoms, our values and our safety. Today’s Senate passage of the Sgt. First Class Heath Robinson Honoring Our PACT Act is an enormous victory for the service members, veterans and their families who have been fighting for years to get the health care and benefits they have earned. By establishing a presumptive service connection for veterans exposed to burn pits and other toxins, this legislation will finally ensure our nation’s finest will no longer be forced to jump through unnecessary hoops or carry the burden of toxic exposure alone. I am proud that my bill, the Presumptive Benefits for War Fighters Exposed to Burn Pits and Other Toxins Act, formed the centerpiece of this bill.”

Burn pits have been used near military facilities in Afghanistan and Iraq to dispose of numerous items. According to the U.S. Department of Veterans Affairs, these have included chemicals, paint, medical and human waste; metal and aluminum cans; munitions and unexploded ordnance; petroleum and lubricant products; and plastics, rubber, wood and food waste.

These materials were burned in open pits when safer options were not readily available. Many veterans developed serious conditions, such as various forms of cancer and respiratory illnesses, after being exposed to the smoke produced by the fires. U.S. Sen. Charles E. Schumer said that about 80% of the claims filed have been rejected by the U.S. Department of Veterans Affairs.

Ryan G. Mason, a Carthage native and U.S. Army sergeant, died Jan. 28, 2021, at 36 of esophageal cancer. He was exposed to burn pits while serving in Iraq. President Joseph R. Biden Jr. believes that the brain cancer that took the life of his son Beau resulted from his exposure to burn pits.

We commend Gillibrand and all those who have been promoting this bill. We hope it passes through the U.S. House of Representatives and arrives soon on Biden’s desk for his signature.