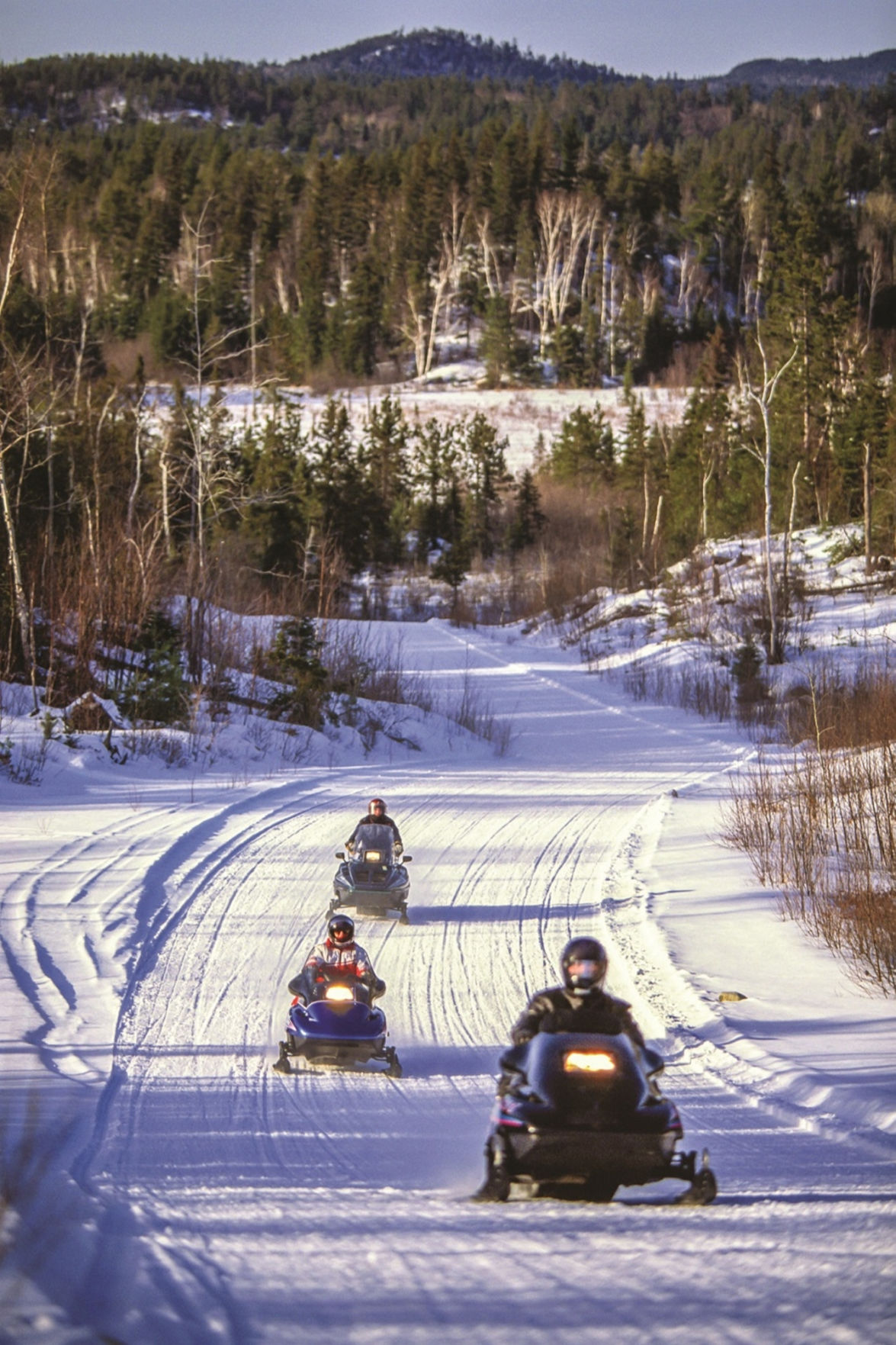 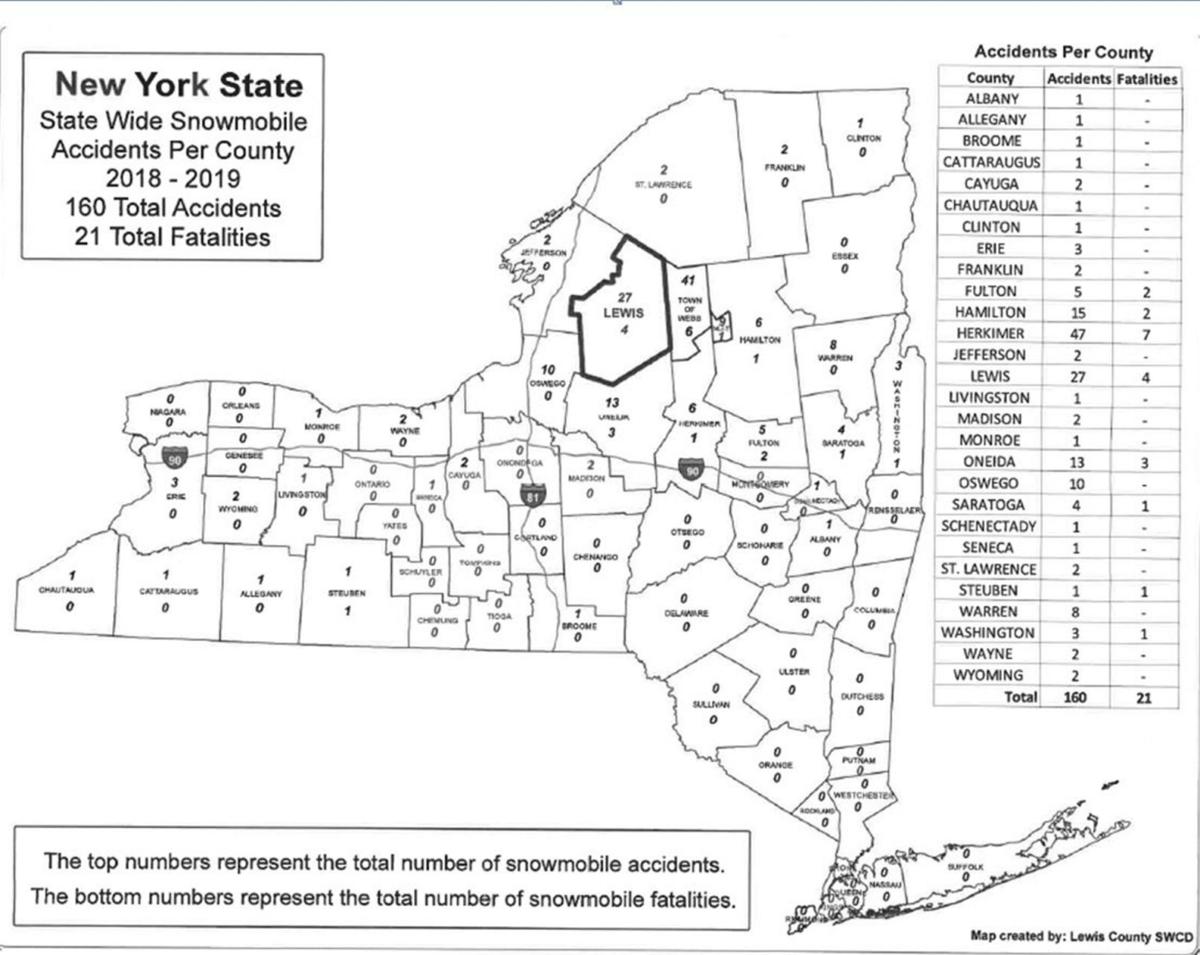 Snowmobile accident and fatality statistics for the 2018-2019 season were provided to law enforcement officials at the annual meeting, held this year in Constableville, by the state Office of Parks, Recreation and Historical Preservation. Photo provided

Snowmobile accident and fatality statistics for the 2018-2019 season were provided to law enforcement officials at the annual meeting, held this year in Constableville, by the state Office of Parks, Recreation and Historical Preservation. Photo provided

Lewis County’s reputation as a popular region for snowmobilers certainly has its advantages.

Tug Hill has plenty of good snow during the colder months and lures numerous recreational riders. This points an exclamation point on the area as a nice tourist destination. And this means that local businesses attract more customers.

But unfortunately, this status has its downsides as well. Lewis County ranked second in the state with the most number of snowmobile accidents during the 2018-19 season.

This information was compiled by the state Office of Parks, Recreation and Historical Preservation. Nicole Unser, snowmobile unit director for the department, provided these statistics to municipal and state law enforcement agencies during a Dec. 11 meeting in Constableville.

It’s well known that the snow that accumulates along the local snowmobile trails is what brings in many recreational riders. This poses challenges to authorities when it comes to enhancing public safety.

“Across the state, over half of the accidents involved sledders colliding with ‘fixed objects,’ including trees, rocks, embankments, ditches and a dock, most often caused by travelling at unsafe speeds,” according to a story published Dec. 18 by the Watertown Daily Times. “It was noted by the Parks and Recreation team that alcohol was likely to have been a factor in more than the 21 accidents the statistics indicated because many accidents aren’t reported until the following day when the drivers have sobered up. Speeding was the primary cause of 16 of the 21 fatalities statewide, too; however, alcohol played a role in eight of those accidents.

“Thin ice, reckless driving, failure to yield right of way, debris and failure to negotiate a turn each caused one death,” the article reported. “The majority of snowmobile accidents statewide, 43 percent, happened between noon and 6 p.m. but 54 percent of fatal accidents took place between 6 p.m. and midnight.”

Attracting more people to use local snowmobile trails offers real benefits to Lewis County. This exposes these individuals to the many recreational treasures located here in Northern New York.

But gaining a reputation for having one of the highest numbers of snowmobile accidents does not serve this region any good. And if alcohol is identified as a major contributor to these accidents, this has the potential of putting liquor establishments in this area in a bad light — even if they don’t deserve it.

Snowmobile enthusiasts from the region are urged to make use of the information available on accidents occurring here. They should carefully review where and when accidents are happening to determine if any measures can be taken to reduce problems. They know the trails better than anyone else, so their input on preventing accidents would be quite valuable.

Having people from this region become involved would show their genuine concern in addressing this issue. If the numbers of accidents and deaths in Lewis County rise over the next few seasons, state officials may feel the need to take matters into their own hands. It would be better if local snowmobilers worked on some possible solutions before it comes to this.

Only males have the need to run high speed .... check the stats... that's why any vehicle insurance for young males is so much higher...duh...

Let's see...snowmobiles that go 100+ MPH... on trails running through woods lined by trees designed for 20 MPH...driven by males trying to be first to the next bar..zero protection other than a helmet.. at night...carrying a passenger.. what could possibly go wrong.. ..