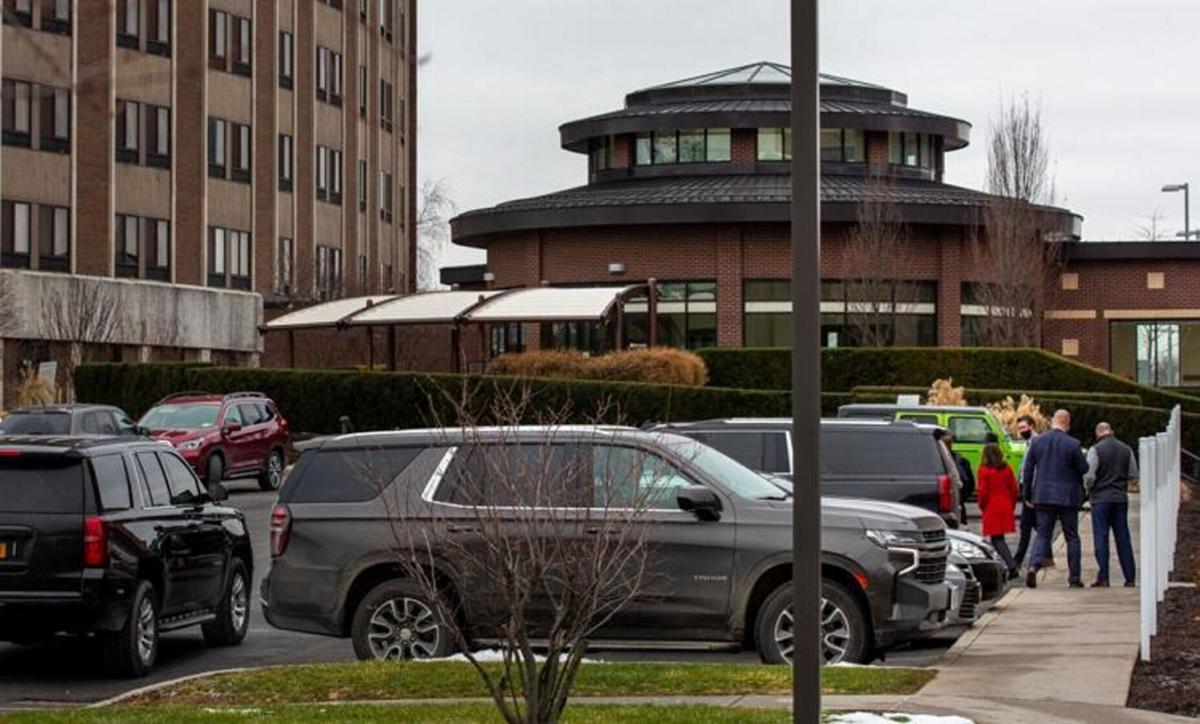 This was about as close as journalists from local news organizations were allowed to get to Kathy Hochul on Wednesday during her first visit to Watertown as governor when she stopped at Samaritan Medical Center. Kara Dry/Watertown Daily Times 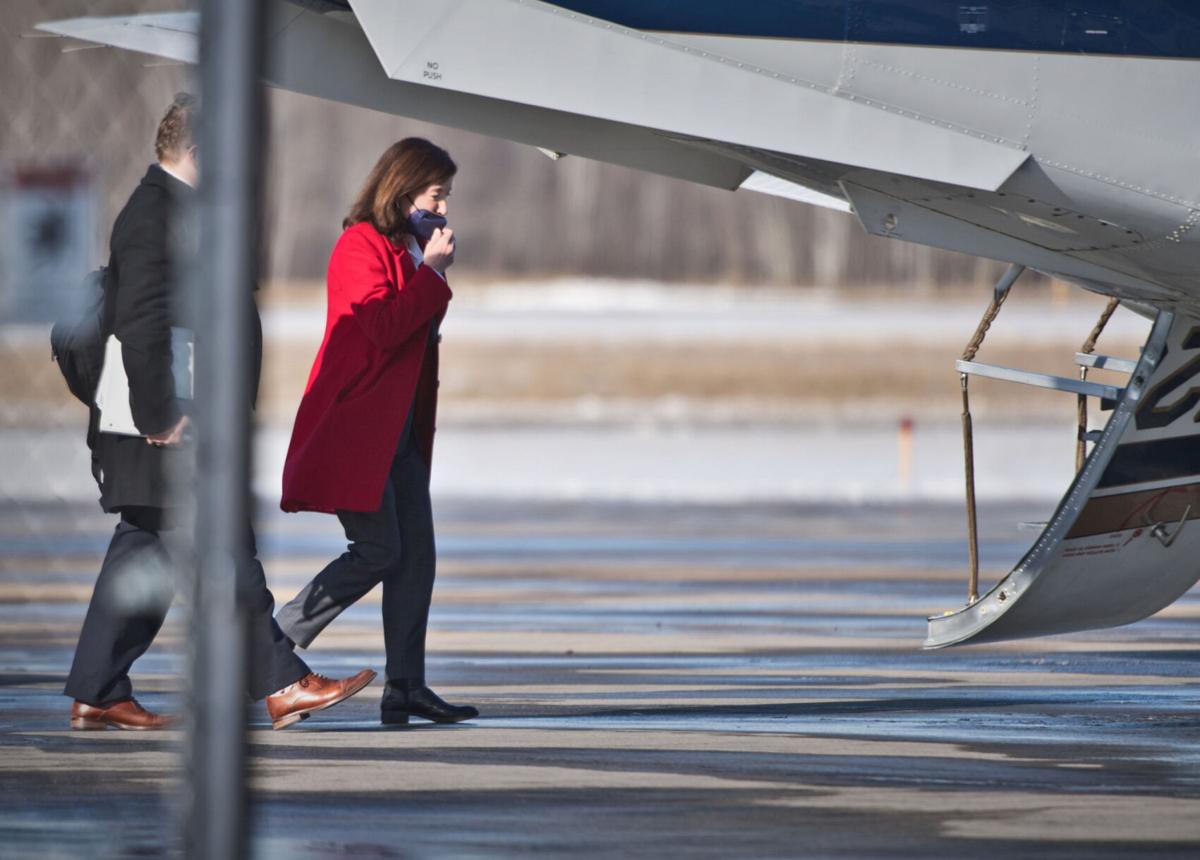 This was about as close as journalists from local news organizations were allowed to get to Kathy Hochul on Wednesday during her first visit to Watertown as governor when she stopped at Samaritan Medical Center. Kara Dry/Watertown Daily Times

When politicians start talking about how transparent they’ll be once in office, you can bet they won’t be all that transparent.

Kathy Hochul pledged to usher in a “new era of transparency” when she became governor in August. But recent events cast doubts on this assertion.

In her first visit to our region as governor, Hochul excluded members of the news media from her Wednesday meetings with health care workers at Canton-Potsdam Hospital in Potsdam and Samaritan Medical Center in Watertown. She also opted not to hold any press briefings while here, so reporters were unable to ask her questions about what people were telling her about the novel coronavirus pandemic.

“The events were closed to the press for taking photos or asking Gov. Hochul questions,” according to a story published Thursday by the Watertown Daily Times. “Representatives with her office cited a lack of time and a tight travel schedule.”

This tight travel schedule was made possible on a private plane — it’s not like she had to wait for a connecting flight at Hancock International Airport in Syracuse. We find it difficult to believe she couldn’t have taken questions from reporters while visiting at least one of these two hospitals.

Hochul somehow found time in her tight schedule to hold a news conference at Clinton Community College in Plattsburgh. She took a tour of the pop-up vaccination clinic held that day, hosted by the state Department of Health and SOMOS Vaccinations at the college, an article published Wednesday by the Press-Republican reported.

The Watertown Daily Times asked why her local visits were closed to the press: “Wednesday’s briefing in Plattsburgh was live-streamed and the governor took questions from reporters via videoconference on Monday, representatives with Hochul’s office said,” according to our story.

Live-stream and videoconference events are certainly helpful to journalists in covering government meetings remotely. During this health care crisis, it’s been crucial to have alternative methods of viewing such gatherings.

But neither option benefited us this week.

We couldn’t ask Hochul questions on Monday about what health care workers told her when she was here two days later. And being able to watch her live in Plattsburgh is fine, except that we weren’t there to question her about her time in Potsdam and Watertown.

This pandemic, which has gone on for nearly two years, continues to perplex government authorities, public health officials, medical personnel and residents of New York state. Many of us are very concerned about the latest developments and how they’ll affect our well-being.

So people have questions about what state government is doing to address these issues. Those of us in the news industry take on the role of posing these questions to our elected officials as often as we can.

In this sense, Hochul dismissed the fears of local residents by not allowing us to do our job. She should subject herself to the scrutiny of the press — this is part of her job as someone who holds public office.

When we believe it’s necessary, we’re going to pose challenging questions and criticize her for mistakes. This governor shouldn’t expect to get a pass.

However, Hochul need not take additional jabs from us for excluding journalists from local events. Her being here is definitely newsworthy, but we can’t report on what’s going on if she keeps us on the other side of closed doors. Do we have to remind her of how cloaking Executive Chamber operations in secrecy helped end the career of former Gov. Andrew Cuomo?

If she truly believes in transparency, Hochul must take the concerns of local residents seriously by making herself available to reporters when she visits our communities. Otherwise, her promises of open government will sound as hollow as those of her predecessor and her colleagues in Albany.

During a life and death crisis, leaders handle the inundation and multiplicity of serious concerns by strategically planning their time in ways that foster the achievement of critical knowledge, aims and goals. In doing so, leaders assuage the fears and concerns of a mature and intelligent public.

Your so-very-very-important Q&A is her and my trite.

Hmmm, a democrat who’s not transparent, who would have predicted that? You get the government you elect. Enjoy and don’t forget to vote for her again.

I applaud your efforts to encourage the Governor to meet directly with the press. Will you kindly hold Rep. Elise Stefanik to the same standard? She stood on the House floor on the evening of January 6th and lied about four states' election results. For example, she claimed the PA Supreme Court "unilaterally and unconstitutionally" eliminated signature verification in the election. In actuality, the court noted signature verification was not in state election law and stated it was not their role to add it. She lied about election procedures in Wisconsin, Michigan, and Georgia as well. Yet when NPR's Brian Mann asked to interview her about these claims, she refused. Of course she did. How would she respond when he presented her with evidence counter to her claims? Perhaps the Watertown Daily Times could investigage the veracity of her January 6 claims a year later and request an interview on them.

Seems like a bad optic to exclude the press. On the other hand, as long as Republicans trash talk vaccines and masks in setting of a pandemic, killing off thousands of their own supporters, the weak and infirm, I’ll be voting for her. What is “real” news today? Elise Stefanic’s lack of leadership encouraging people to get the jab & failure to lead & denounce the antivax radicals in the GOP.

In my opinion Houchul came to do her job. Her goal was to meet with the hosptial staff and other officials it was NOT to do a photo op. That is refreshing.

If the newspapers feeling are hurt by that then ell too bad. If the paper has questions they can send them to her or ask the officials what was said.

folks in NY you are getting played, badly. Comical how pathetic y’all vote.

To the Watertwon Times editorial writer: Show us where you are critical of Elise Stefanik for using the same, and even more severe tactics with media our so-called representive takes with media she doesn't like and labels left wing radicals when she knows that is not true.