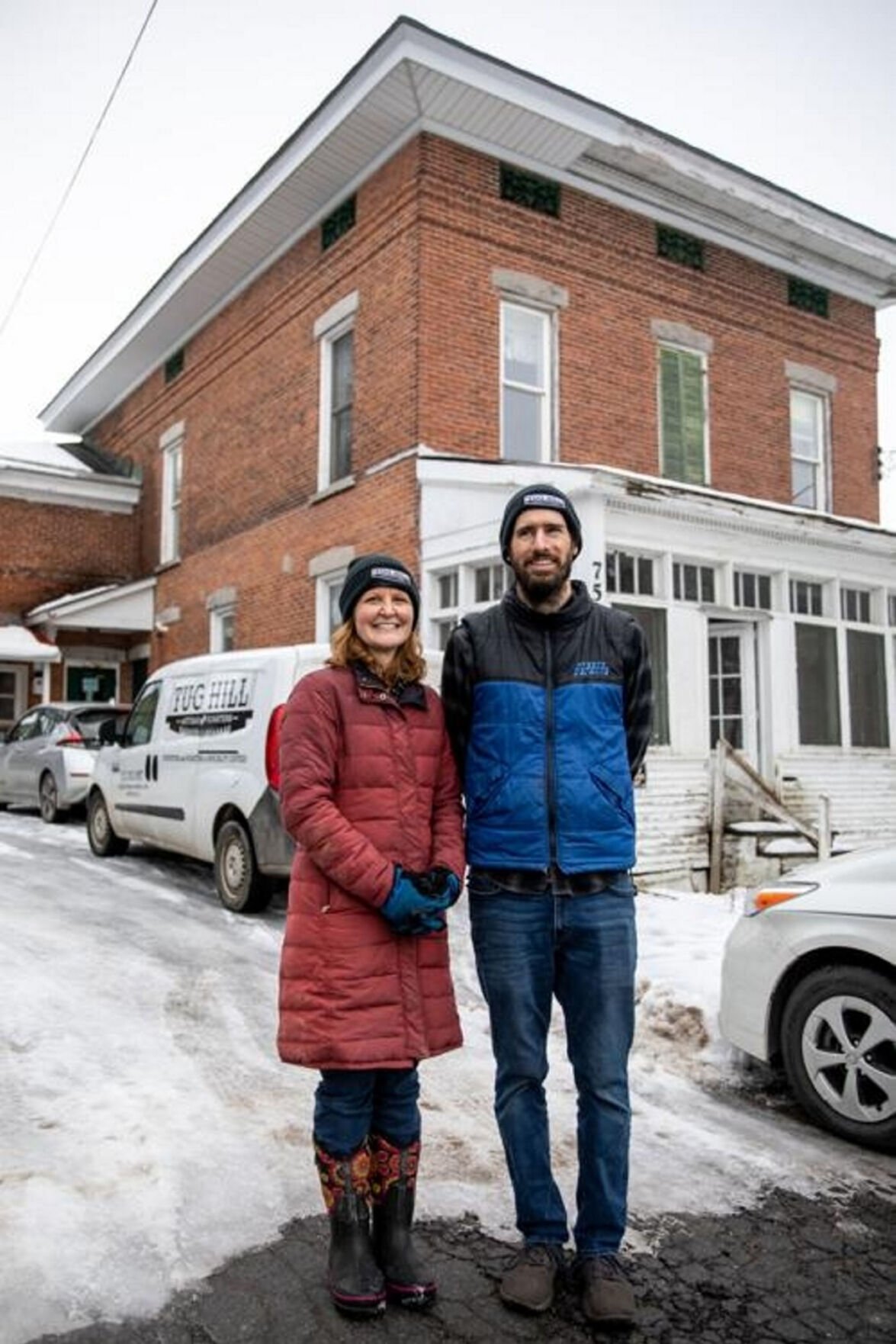 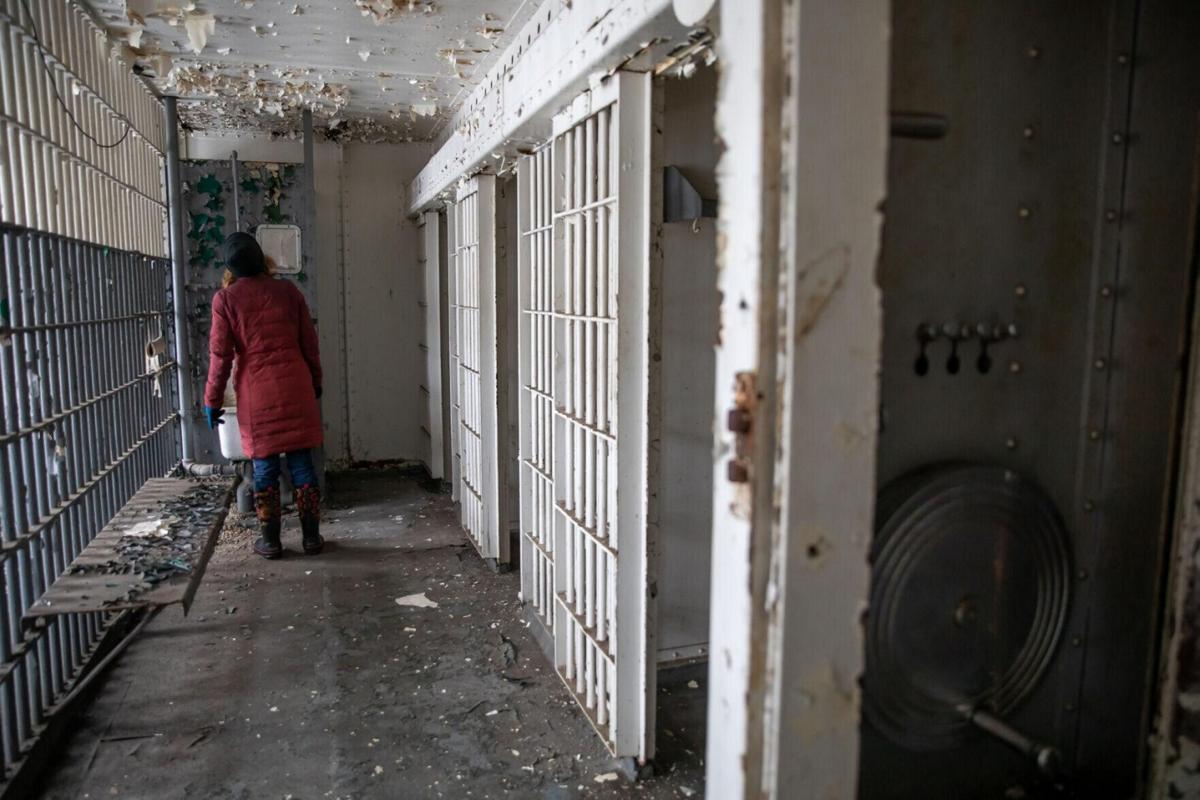 Vanessa Gilbert, co-owner of Tug Hill Artisan Roasters, looks around one of the cell blocks at the old Lewis County jail at 7514 S. State St. in Lowville, which she and her husband and co-owner, Scott Gilbert, purchased for their growing business. Kara Dry/Watertown Daily Times

Vanessa Gilbert, co-owner of Tug Hill Artisan Roasters, looks around one of the cell blocks at the old Lewis County jail at 7514 S. State St. in Lowville, which she and her husband and co-owner, Scott Gilbert, purchased for their growing business. Kara Dry/Watertown Daily Times

A lockup facility isn’t necessarily what would come to most people’s minds when asked where they would like to meet for coffee.

But Vanessa and Scott Gilbert see the potential of “the old jail” in Lewis County that many individuals wouldn’t consider. Their business, Tug Hill Artisan Roasters, needs a bigger space in which to operate. And the structure housing the former jail and sheriff’s office seems to fit the bill.

“It’s very much both of our [dream],” Vanessa Gilbert said in a story published Monday by the Watertown Daily Times. “We need more space. Our place is tiny, so three years ago we kind of started keeping our eyes open and it became more and more serious because it’s more and more of a need.”

The Gilberts began Tug Hill Artisan Roasters in 2017 “roasting the coffee beans in a shed placed on land in Castorland owned by Mr. Gilbert’s brother and then-business partner,” the article reported. Their plan is to purchase a brick-and-mortar store and open a café.

“It’s the next step in the logical progression if, as a business, (we) want to grow,” Scott Gilbert said in the story. “When we started the business, we kind of set it as a goal to have a café, like a flagship operation, within three years. So taking that into consideration, we’re really far behind. That said, I think it’s important to do it right. I hope that we can offer really great services to the community.”

The former jail and sheriff’s office at 7514 S. State St. in Lowville will need quite a bit of work. The structure was bought in 2011 by Northern New York Transitional Living Services, but the organization was unable to follow through on its renovation plans. So it has been vacant for the past decade.

The building has lead paint and asbestos, which will need to be removed before it can be converted into a café. Tug Hill Artisan Roasters is eligible for a state grant through the Homes and Community Renewal program. This would pay for such a removal project.

“As the interior of the building gets cleaned of dangerous substances, the Gilberts are hoping to be able to rescue some of the architectural history like tin ceilings, large windows and hard wood craftsmanship while also using resources at their disposal to make their business more user-friendly, including adding an elevator also covered by the grant, so the entire building is usable again but this time for everyone, including those who can’t make it up the stairs,” according to the story. “The front half of the brick building, the county sheriff’s residence, was constructed in 1864 with a small jail built onto the back. However, the jail section was replaced with what now stands holding 12 jail cells made of steel in 1931. The difference in sounds between the two structures, from the softening of wood details and carpeted floors to the cold clang and echoes of steel girders, metal walls and ceilings, make it clear where the old sheriff’s residence left off and the newer old jail took over. The sheriff’s residence eventually became the sheriff’s office, an area which has been repurposed a number of times since the current Public Safety Building was constructed in the late 1980s: addiction services, records storage, the county Highway Department and the Office for the Aging.”

This is an excellent idea, one that creates a new business while preserving local history.

The Gilberts are exhibiting an entrepreneurial spirit that makes our north country economy thrive, and we wish them well with their plans.