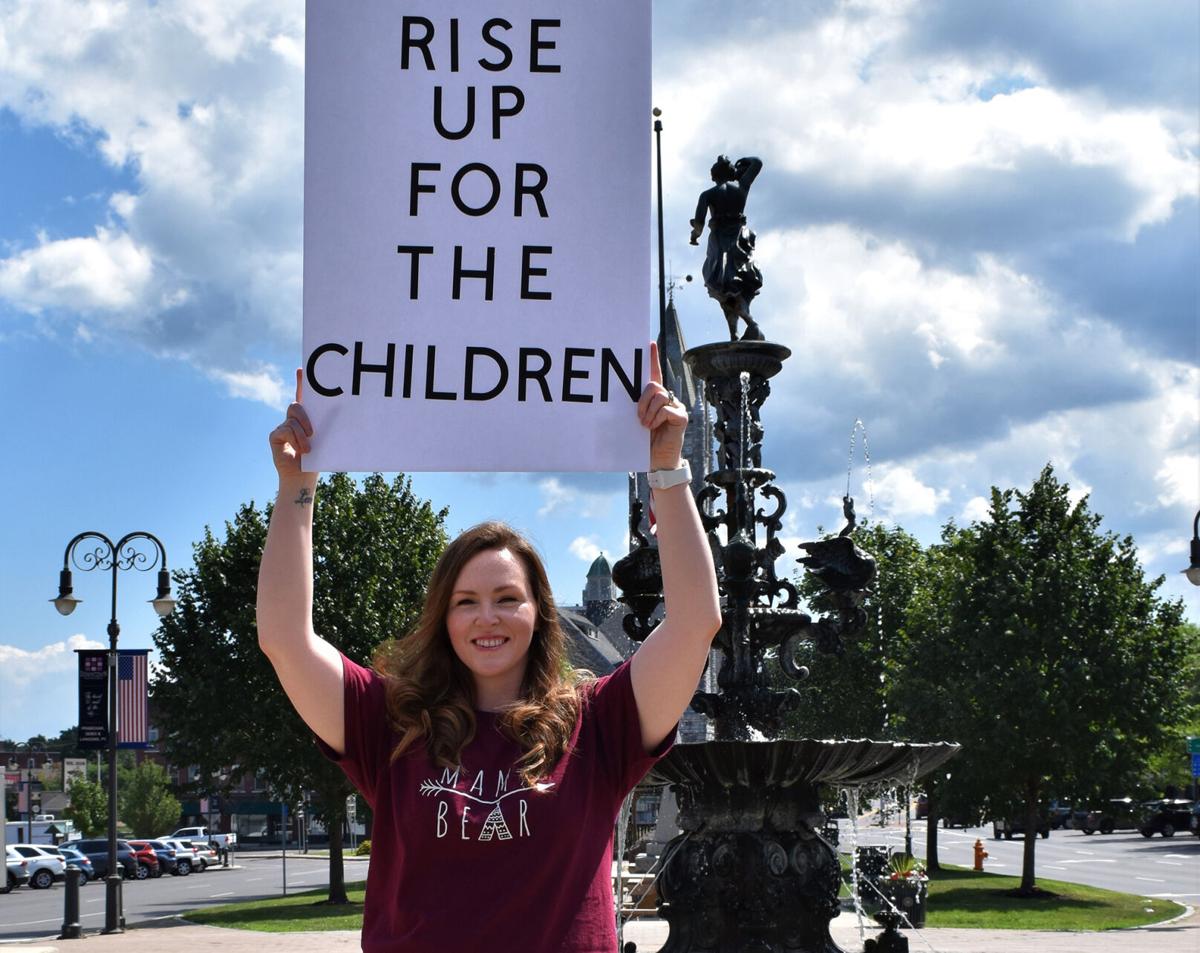 Jessica Corson holds a sign Aug. 15 at the Stand Up for the Children march in Watertown’s Public Square. Rachel Burt/Watertown Daily Times 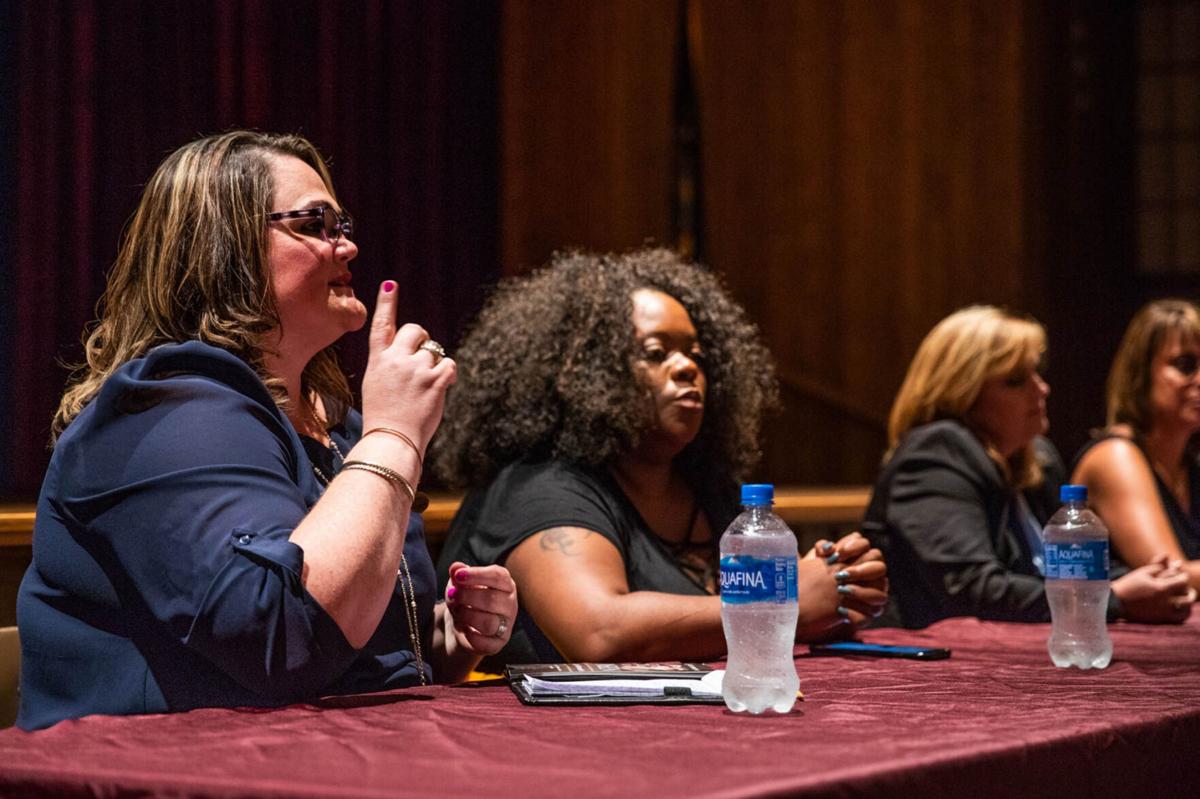 Victoria J. Recor, left, mother of a sex trafficking victim, speaks during a panel discussion event about sex trafficking at the Sturtz Theater at Jefferson Community College held in September 2018. The panel was part of a series of community events to bring awareness and education about the intersection of the opioid epidemic and sex trafficking in the north country. Sydney Schaefer/Watertown Daily Times

Jessica Corson holds a sign Aug. 15 at the Stand Up for the Children march in Watertown’s Public Square. Rachel Burt/Watertown Daily Times

Victoria J. Recor, left, mother of a sex trafficking victim, speaks during a panel discussion event about sex trafficking at the Sturtz Theater at Jefferson Community College held in September 2018. The panel was part of a series of community events to bring awareness and education about the intersection of the opioid epidemic and sex trafficking in the north country. Sydney Schaefer/Watertown Daily Times

Many people who become ensnared in human trafficking don’t realize they’ve been targeted by a predator until it’s too late.

Ashleigh Carlin, who moved to Fort Drum about a month ago, believes she could have fallen victim to this tragedy when she was living in Seattle. She was seven months pregnant when a man approached her at Pike’s Place Market.

The man struck up a conversation and asked some questions about her condition. Believing the individual was just being friendly, she naively answered his inquiries.

Fortunately, she sensed this was a risky situation when he asked her if she was at the market with family members or if she was alone. She said she was there with family, pointed to a random person and walked away.

Ms. Carlin doesn’t know if she was being set up, but she followed her instincts and slipped away. She discussed this incident in a story published Aug. 15 by the Watertown Daily Times.

“I guess I just wasn’t being vigilant enough,” she said. “I was like, ‘Oh my gosh, what have I been doing this whole time?’ … I’ve been feeding into everything he’s been asking me.”

July 30 was National Child Trafficking Day. Wanting to increase awareness of this horrendous problem, Jessica Corson helped organize the Stand Up for Children March held Aug. 15 in Watertown. Family members and friends gathered in Public Square last week and displayed signs calling attention to this cause.

“I wanted to bring it to our small little part of the world to raise awareness,” said Ms. Corson, who is the spouse of a Fort Drum soldier. “I don’t think enough people could possibly know about it.

“There are children every day who are getting sold into sex slavery,” she said. “It’s alarming numbers. It’s horrendous to think about what they go through. If you were to put your child’s face on that child, you would be out here.”

It’s tempting to believe that Northern New York is immune from the appalling reality of human trafficking. But documented accounts demonstrate that it has occurred here.

Victoria J. Recor starting working with the Alliance for Better Communities after her 15-year-old daughter was lured into sexual slavery while attending Watertown High School in 2015. A July 13, 2018, article in the Watertown Daily Times reported that her daughter never fully recovered after becoming addicted to drugs.

In November, Holly Austin Gibbs offered a presentation at Hilton Garden Inn in Watertown about her experience being trapped in child sex trafficking. At the age of 14 in 1992, she believed a man she met at a mall in Tuckerton, N.J., would lead her to a life of adventure.

Instead, the man turned Mrs. Gibbs into a sexual pawn. She eventually escaped this nightmare and became the director of the Human Trafficking Response Program of Dignity Health in San Francisco.

Her compelling story was chronicled in Nov. 9 in the Watertown Daily Times. The event she spoke at was hosted by the Alliance for Better Communities and the Child Advocacy Center of Northern New York, and it was sponsored by the Jefferson County District Attorney’s Office.

It’s painful to reflect on the horrors that children endure, some for years on end. But it’s important for us to speak about this issue and do what we can to thwart human trafficking. We commend all these individuals for sharing their stories and making us more aware of the plague right here in our communities.

Among the people and agencies that have spread human trafficking awareness in our area are the Sisters of St. Joseph, Watertown.

The sisters have provided human trafficking presentations at the motherhouse on Washington St., and have collaborated with area agencies on awareness programs.