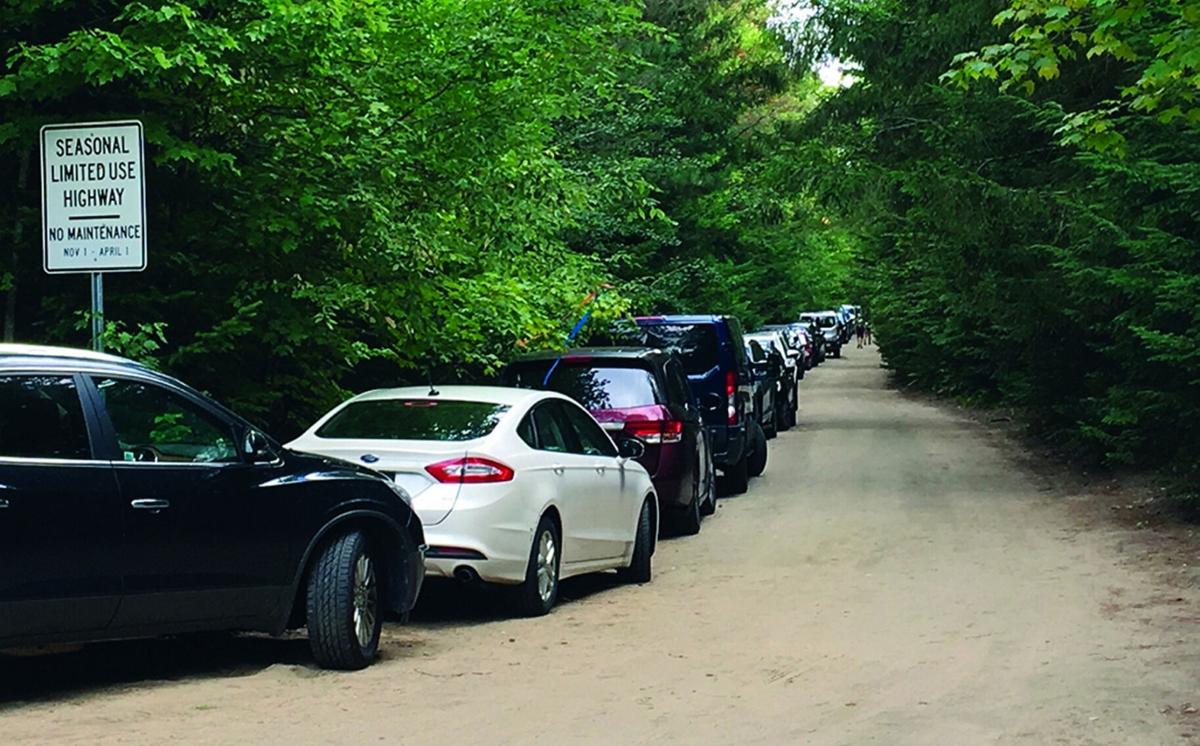 An overflow of parked vehicles is seen in May at a trailhead for the Forest Preserve in the High Peaks Wilderness Area. Photo by Nancie Battaglia 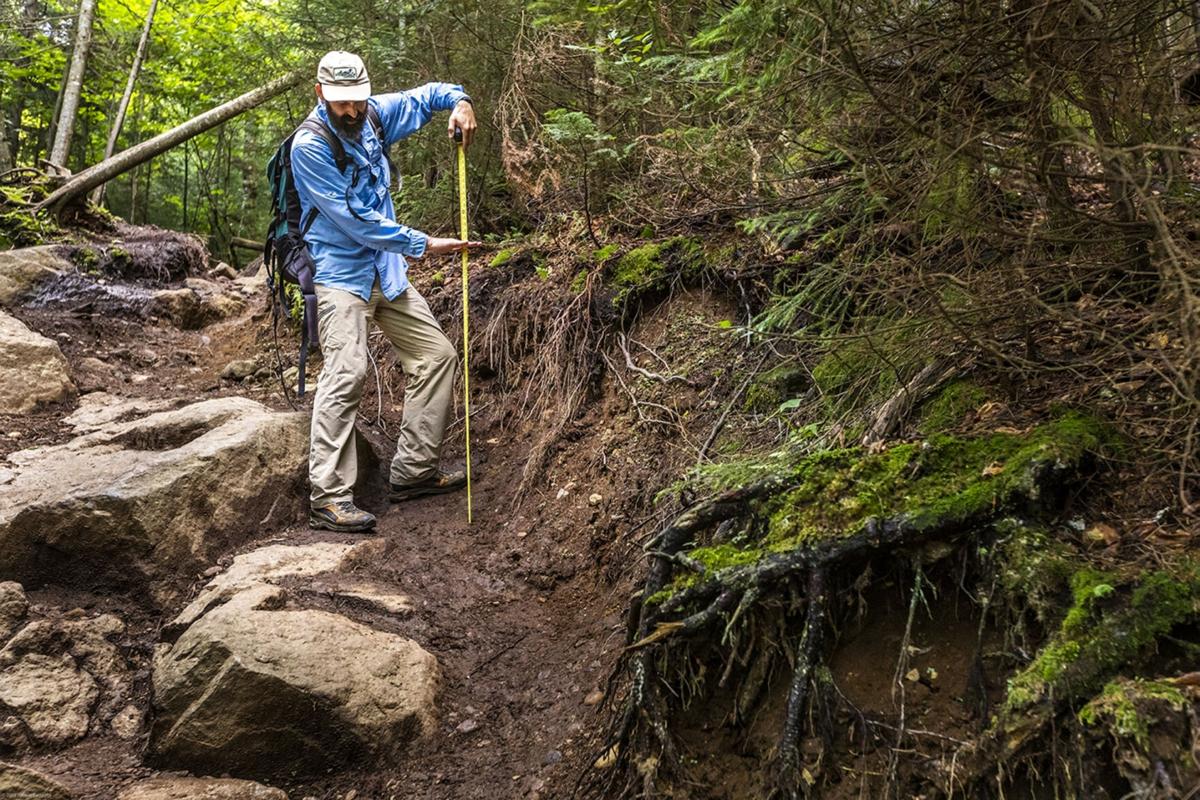 An overflow of parked vehicles is seen in May at a trailhead for the Forest Preserve in the High Peaks Wilderness Area. Photo by Nancie Battaglia

For more than 20 years, the Adirondack Council has warned of the dangers of overuse of the Forest Preserve within the High Peaks Wilderness Area.

“More and more people are looking to spend time recreating on our public lands. And this trend, coupled with major funding for tourism campaigns, has led to a huge surge of visitors in the Adirondack Park,” according to information under the heading “Overuse in the Adirondack Park” on the Adirondack Council’s website. “In 2017, 12.4 million people visited the Adirondacks. That’s almost 500,000 more people than 2016. This has been reflected in the numbers of people visiting our wildlands. According to a regional tourism survey by the Regional Office of Sustainable Tourism, 72 percent of day trippers come to the Adirondacks for a wide variety of outdoor activities. Of those people, 85 percent come for hiking, making it the most popular outdoor activity in the Adirondack Park. Most of these people are concentrated in key regions with accessible points to Wilderness areas and nearby amenities, such as the Old Forge, Lake George, Lake Placid, and Keene communities. So much so that the Eastern High Peaks Wilderness Area near Lake Placid has been designated as a Leave No Trace Hot Spot for 2019.”

The Adirondack Council’s report highlighted the adverse effects of overuse. These include trail damage and erosion, damage to vegetation, clean water polluted, wildlife impacts, hiker safety and a sense of solitude loss.

It’s no surprise that the novel coronavirus pandemic has exacerbated these problems. Living under lockdown mandates for several months made many New Yorkers eager to get out of the house and spend time outdoors.

“Hiker traffic in the Adirondack Park has reached historic levels — including many new visitors looking to get outdoors this summer following months of stay-at-home recommendations amid the coronavirus pandemic,” a story published Aug. 27 by the Adirondack Daily Enterprise reported. “Faced with that, the [state Department of Environmental Conservation] set up three new information stations in Lake Placid, Keene Valley and North Hudson this month. The state also started sending out 511 alerts about trailhead parking along state Route 73.”

Along with its warnings about overuse, the Adirondack Council has proposed that the state implement a user permit system. This would control the number of people using the Forest Preserve on any one day.

“What we are proposing is relatively simple. Everyone goes to the trails of the High Peaks in a vehicle. We would like the state to delineate and number the parking spaces at the trailheads to the most sensitive locations,” John Sheehan, director of communications for the Adirondack Council, wrote in an email. “It could then use a simple web or cellphone-based application to allow people to reserve a space. The state has a reservation system in place for campgrounds inside and outside of the park, run by Reserve America. It could serve as a model too, although there is a fee for that one because Reserve America is a private company. We’d prefer that there be no fee.”

DEC Commissioner Basil Seggos, however, has been reluctant to implement a user permit system. He said this should be a measure of last resort. But this idea isn’t without precedent.

Mr. Sheehan pointed out that the state has a no-fee user permit system for the Blue Hill section of Catskills Park. In addition, people who wish to use the state’s island campsites at Lake George must first get a permit. And parking spots at Stillwater Reservoir near Beaver River need to be reserved, he said.

Environmental groups that have studied the problem of overuse in the Forest Preserve have identified the same concerns expressed by the Adirondack Council, Mr. Sheehan said. These include the Leave No Trace Center for Outdoor Ethics as well as the DEC’s High Peaks Strategic Planning Advisory Group.

The state should establish a user permit system, at least on a pilot basis, for the Forest Preserve. Give it some time to see if usage can be better managed.

This could complement other actions by the state to restore overused areas and educate people on better practices. It’s worth a try to ensure these recreational areas remain in their best condition for future generations.

Permits today and other restrictions later. These are public lands and should have open, unrestricted access. After all, we all “own” it. If parking is an issue, build parking lots, but don’t regulate access. We are choking on regulations as it is. Enough already!

I am in favor of a permit system. On certain peaks (Giant/RPR, Cascade/Porter, the whole bunch accessed by ADK Loj Road), there is so much usage that no amount of maintenance can keep up. Also, the experience is completely altered. Permits have precedence in other places and should only be used on certain trailheads. For instance, limit access to Marcy by ADK, but no limits from Tahawus, which is farther and harder. Limit Giant from Keene Valley but allow from RPR. Then, with reasonable maintenance, the trails will recover. I would be willing to sign up well in advance and risk bad weather in order to secure a "wild" experience on a trail with fewer 50' long mud holes.

A fee and permit to hike is going to discourage a lot of hikers. There’s not much left in New York State that you can do without having to pay for it, and this will just cause more people to stay home. It’s state land and free to use for all and any. if you’re going to charge or apply permits to hike free land, then it is no longer free and the park will be used as a money making scheme by the state. There’s another way to solve this. It called maintenance. Overcrowding at a few high peaks should not lead to the overhaul of a free and accessible park system.

The editorial points out that the Adirondack Council would like any user permit system not to include a fee, and this can be done. The proposal merely requires people to use a program through the internet or a smartphone app to register for a parking space for a particular day. That’s it. Most state campsites require people to get use permits beforehand, so this has plenty of precedent. Thank you for your input.