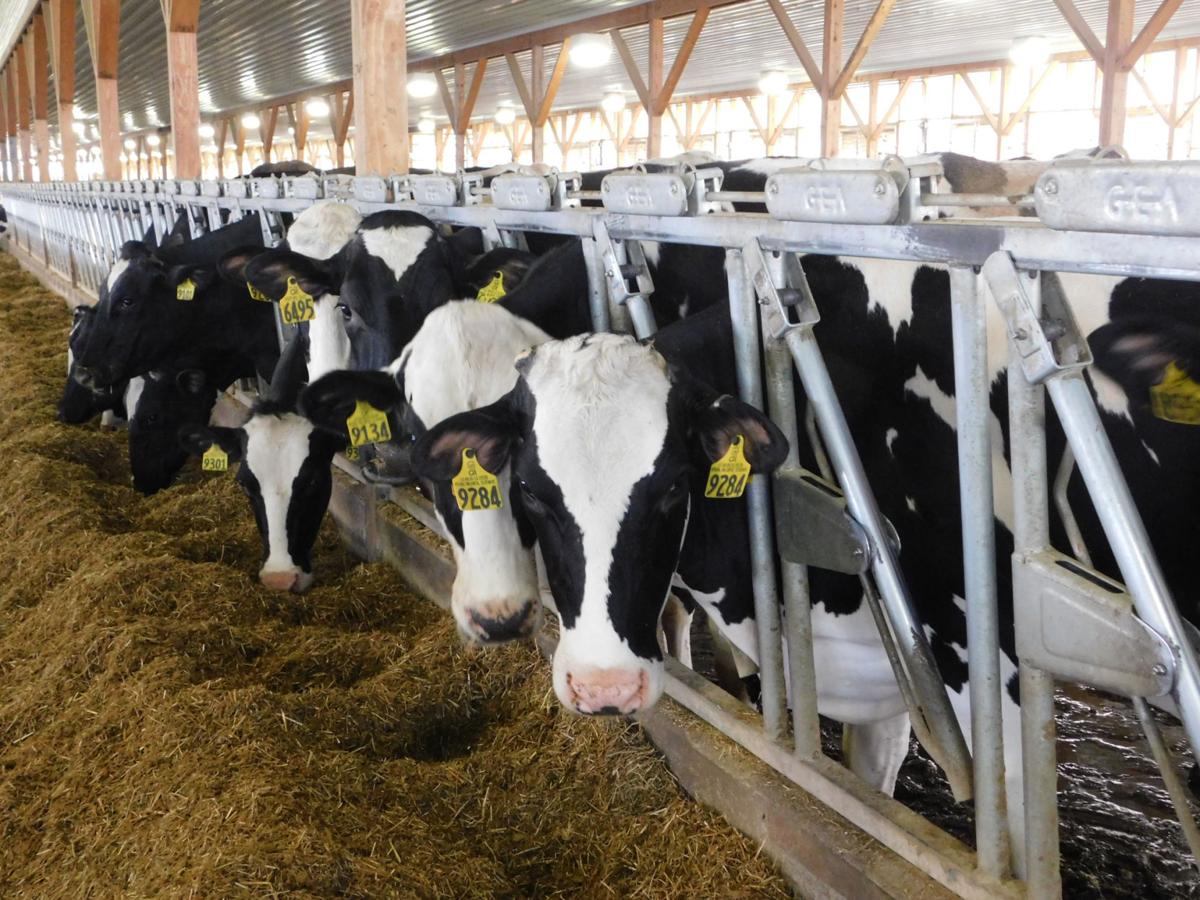 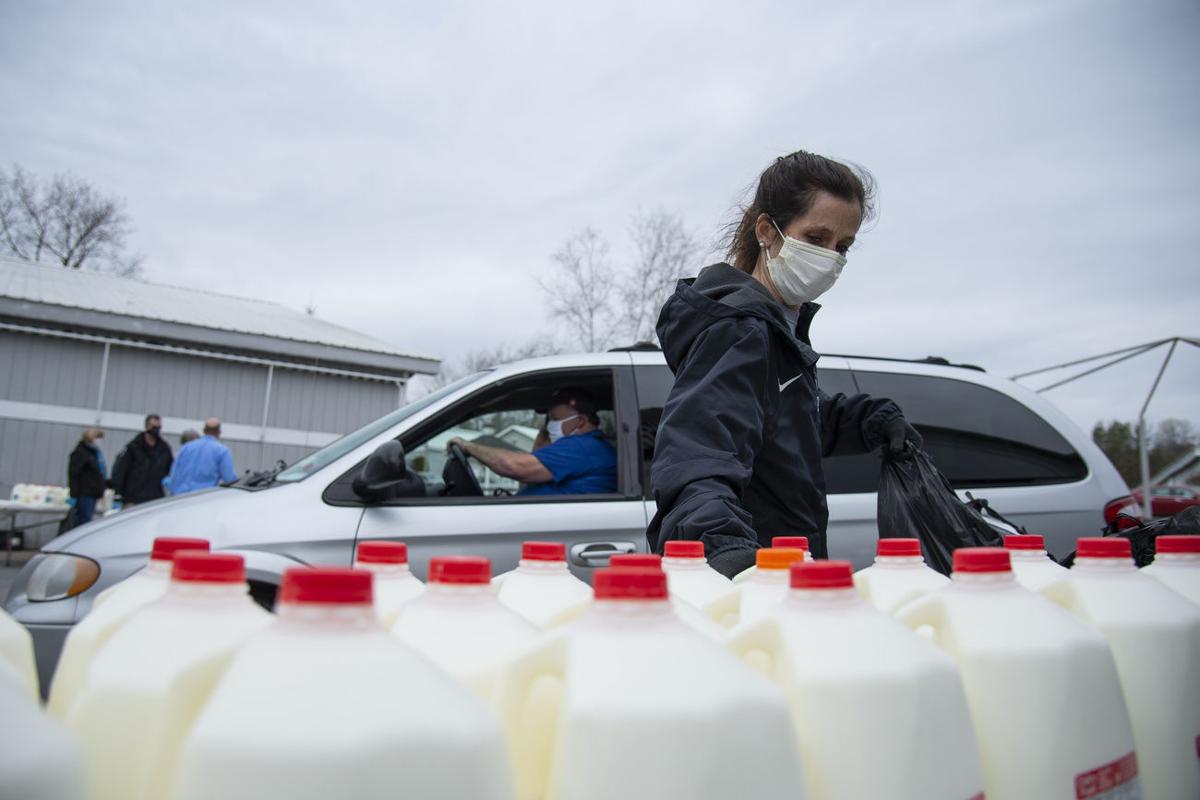 Christy Cole reaches for another gallon of milk to hand out April 24 during a Dairy Drive event at the Lewis County Fairgrounds in Lowville, Lewis County. Emil Lippe/Watertown Daily Times

Christy Cole reaches for another gallon of milk to hand out April 24 during a Dairy Drive event at the Lewis County Fairgrounds in Lowville, Lewis County. Emil Lippe/Watertown Daily Times

After enduring several years of decreasing prices for their products on the commodities market, they were looking forward to a modest improvement this year. Perhaps things were finally going to turn around for them.

“After years of suffering low milk prices and slogging through negative trends, 2020 was meant to be the light on the horizon for area dairy farmers. They were seeking a beacon of hope and positivity, a small promise for a better tomorrow,” according to a story published April 25 by the Watertown Daily Times. “Rising all-milk prices — up $4.30 from the year prior — meant that, for the first time in a half decade, farmers would finally turn a small profit on their milk, not merely break even or, as had typically been the case, lose a large percentage on every dollar. As farmers geared up their soils for spring plantings, the latest dairy market report from the National Milk Producers Federation highlighted ‘positive growth,’ citing the continued improvement of dairy exports and a national increase in demand for milk and butter products.”

But then a horrible public health crisis first identified in China turned into a global catastrophe. The novel coronavirus pandemic has left hundreds of thousands of people dead and many others seriously ill.

Controlling the spread of the virus has compelled governments to close non-essential businesses and impose stay-at-home orders. Commercial activity throughout the United States has slowed considerably.

Schools across the country have closed. Many restaurants have either shut down or severely decreased their business.

Most of the milk, butter and cheese orders that dairy farmers had hoped to pick up through these markets will go unfulfilled. Vast quantities of the milk they produce each day must be dumped.

“Estimates suggest that about half of all butter and cheese is sold through restaurants when they’re fully operational, while 7 percent of fluid milk goes to area schools,” the Times article reported. “Now, with the closures that have forced some diners and establishments to shutter their doors, and still others to serve modified takeout only menus, ‘The orders from these entities are fractions of the typical volumes that flow through those channels,’ Smith Kryzsiak wrote. Now, area farmers are left with as much as 72,000 pounds of milk per day — a full tractor-trailer load — that may soon have no place to go.”

On April 27, Gov. Andrew M. Cuomo announced a new program called the Nourish New York Initiative. Dairy products will be purchased by the New York government from farmers and distributed to food banks across the state.

This will certainly help, and it’s good that such a program was created to serve these joint needs. About $25 million has been allocated for this measure.

But this obviously won’t be the lifesaver that dairy farmers require. It’s not as if they can shut down their operations and wait for lockdown orders to be lifted. They must either dump the milk they produce every day or start getting rid of their cows.

We stand to lose many of the remaining family farms we left. Authorities should consider the consequences of crippling a vital part of our food supply. Bold ideas are needed to ensure farmers have access to sufficient funding to keep going.

Of course, the best solution is to get food industry markets moving again. This will give dairy producers the boost they need to get back on track.

There are two sides to the supply line, consumer and commercial. Farmers are dumping milk, smashing eggs, plowing fields under because of the lack of demand on the commercial side do to the shuttering of restaurants. Thanks, Cuomo...

You missed it. That should be: Thanks Loser Trump.

People are still eating. It's ridiculous to throw away food. But then again I dare say farmers were enthralled with tRump so there ya have it folks.

Well let's see. Rather than shoot them, many of the big boys are dumping their piglets cheaply. You can buy all the piglets you can find for $50 a pop and it may go even lower. Meat shortages are already showing up because of the virus. The price of pork should rise above its cheap price offering of yesterday. Can you say "Danish Ham"? Diversify, diversify, diversify. Well at least into pork! [beam] Think of the opportunities this could bring on a local level. At the very least, why dump it down the drain when you could spread it over your fields. Many farmers lime their fields in the spring and summer - why not use your milk.

RE: "Down the drain: Dairy producers are forced to dump milk as markets dry up"

Except the fact that nobody is forcing farmers to dump milk. They are making that choice themselves. Restaurants are not forced to throw away perishable inventory either.

Nobody is forced to let crops rot in the fields either.

There are other options -- ways to make that food available to those who need it.

Many have found that way. Wouldn't it be better to donate than dump?

Cuomo has come up with a way for farmers to even recoup some of their losses.

Rven donating can have unexpected returns.

Brilliant! No one is forcing farmers to produce the food either. All we need to do is go to the grocery store, right? Who needs farmers? Even if they produce the food and can't sell it then they should just give it away to those who need it. After all it costs very little to produce, harvest and distribute food and farmers are all rich so they can afford to work all day for nothing.

It's so cool when someone doesn't even read the piece and then makes an off the wall reply!