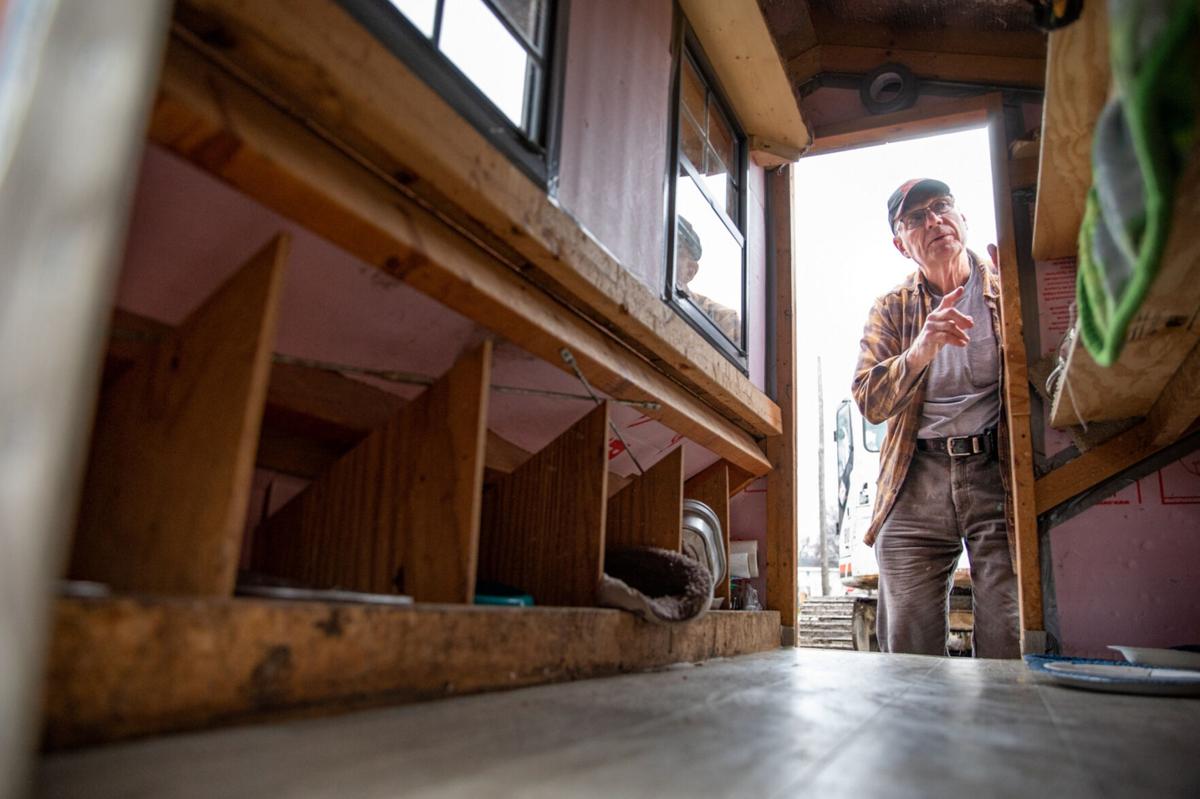 Mike Manning points out shelves of beds he installed in a repurposed chicken coop for a colony of stray cats in a vacant lot on Burlington Street, which he and Toni Soluri maintain daily in Watertown. Kara Dry/Watertown Daily Times 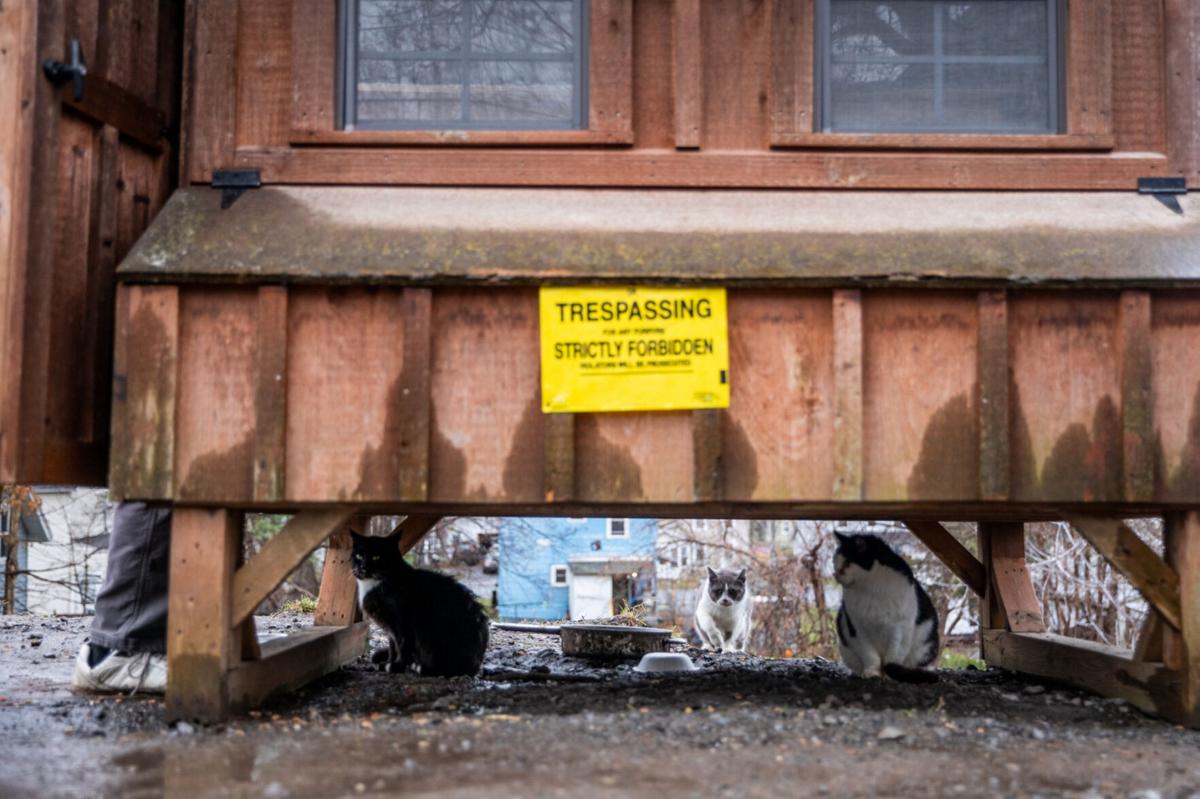 Mike Manning, with the morning shift, and Toni Soluri, in the evening, maintain a repurposed chicken coop every day providing food, water and shelter to a colony of stray cats living in a vacant lot on Burlington Street in Watertown. Kara Dry/Watertown Daily Times

Mike Manning points out shelves of beds he installed in a repurposed chicken coop for a colony of stray cats in a vacant lot on Burlington Street, which he and Toni Soluri maintain daily in Watertown. Kara Dry/Watertown Daily Times

Mike Manning, with the morning shift, and Toni Soluri, in the evening, maintain a repurposed chicken coop every day providing food, water and shelter to a colony of stray cats living in a vacant lot on Burlington Street in Watertown. Kara Dry/Watertown Daily Times

In a year of such horrible news, it’s inspiring to read about how people in the north country continue to do what they can to help those in need.

Watertown resident Mike Manning is one of these kind souls. For about two decades, he’s been serving his brand of humanitarianism — one saucer of food at a time!

Mr. Manning tends to a colony of cats at his home on Burlington Street. For more than 20 years, the Vietnam veteran has brought food and bedding to a lot adjacent to his residence where the cats live.

He previously made use of two huts and some cages. But now he has them sleep in an old chicken coup, which he fixed up for them.

“Without favor, Mr. Manning, 72, has trekked food and bedding out to his colony of cats every morning for two decades. At this point, the cats know his car, but especially his whistle, and all he has to do is tweet out once and they’ll come running,” according to a story published Dec. 1 by the Watertown Daily Times. “Mr. Manning and his wife, Sylvia, are both retired. He was in the Navy and was injured in Vietnam. She’s had pneumonia three times and shouldn’t necessarily be around cats too much, but she knows how much her husband loves them.”

The Mannings have help in caring for the cats from Toni Soluri, a friend. She feeds the cats at night while the Mannings do so during the day.

“Mr. Manning has trapped and fixed at least a dozen cats in recent years, costing $85 each. They spend $5 every three days on a rotisserie chicken, more on bedding and far more on wet food. The colony has gotten larger in recent years, which they suspect to be a result of people dropping off their unwanted cats,” the article reported. “They’ve never asked for help. But they recently ended up conceding to the idea of accepting donations of cat food or bedding.”

Alicia Hinkal, a former daughter-in-law who remains close to the family, posted a notice on her Facebook timeline about what the Mannings are doing. She asked people to help them out, and support started pouring in.

“The post caught traction and was shared more than 600 times. Ms. Hinkal said she’s gotten messages from people in Alabama, Illinois and Malone, Franklin County, all saying they sent food to the Mannings,” according to the story. “Already, at least 30 donors have dropped off food at the Mannings’ doorstep.”

This has become a ministry for Mr. Manning.

“He’s had some go to the animal shelter for adoption, but he would like to see more of it, especially ahead of the winter,” the article reported. “But either way, Mr. Manning is going to continue as the colony’s protector. It’s given him a purpose, and in being involved with them, he said he actually sees the appreciation they have for him.”

Mr. Manning reminds people of the need for pet control, and he’s correct. Rather than see animals breed multiple times, creating litters that owners can’t handle, the best option is for them to be spayed or neutered. This ensures more cats don’t become strays and suffer from the harsh conditions outside.

But for the cats he has devoted his life to, Mr. Manning is a saint. We commend him for his commitment to providing these cats with what they need to survive and laud everyone who helps him carry out this mission.