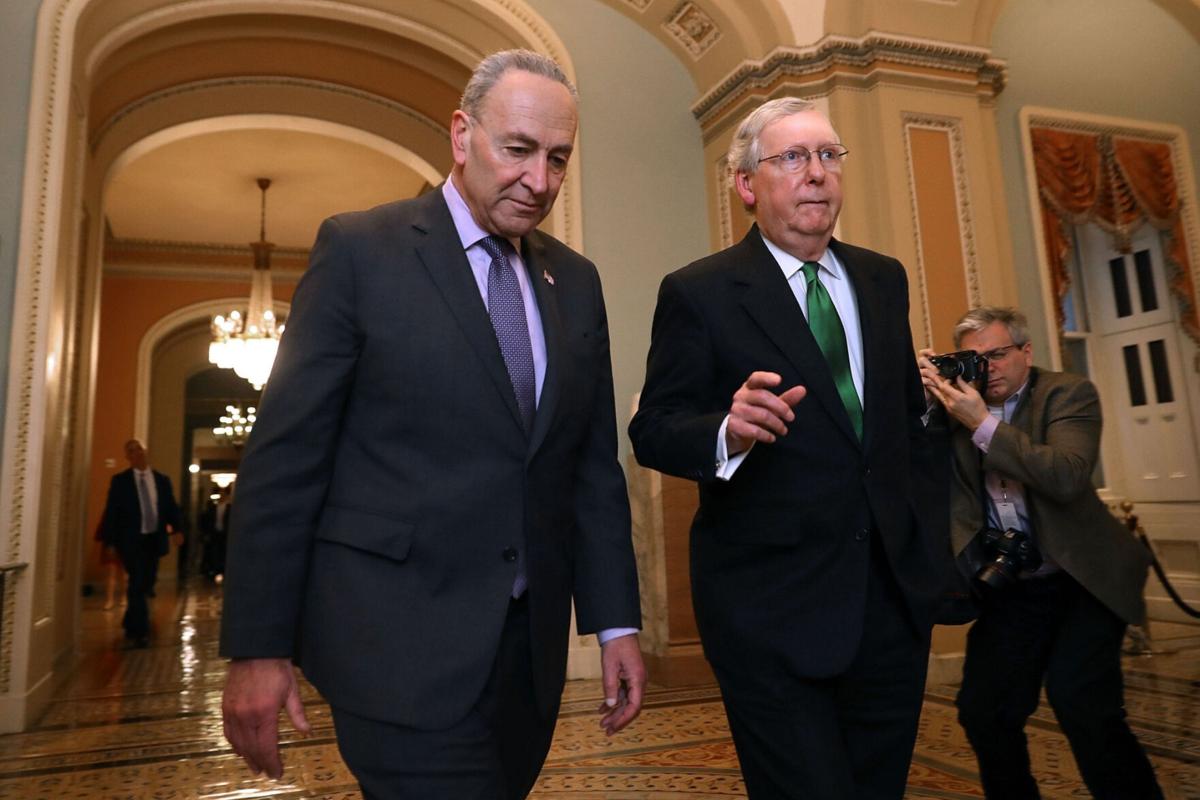 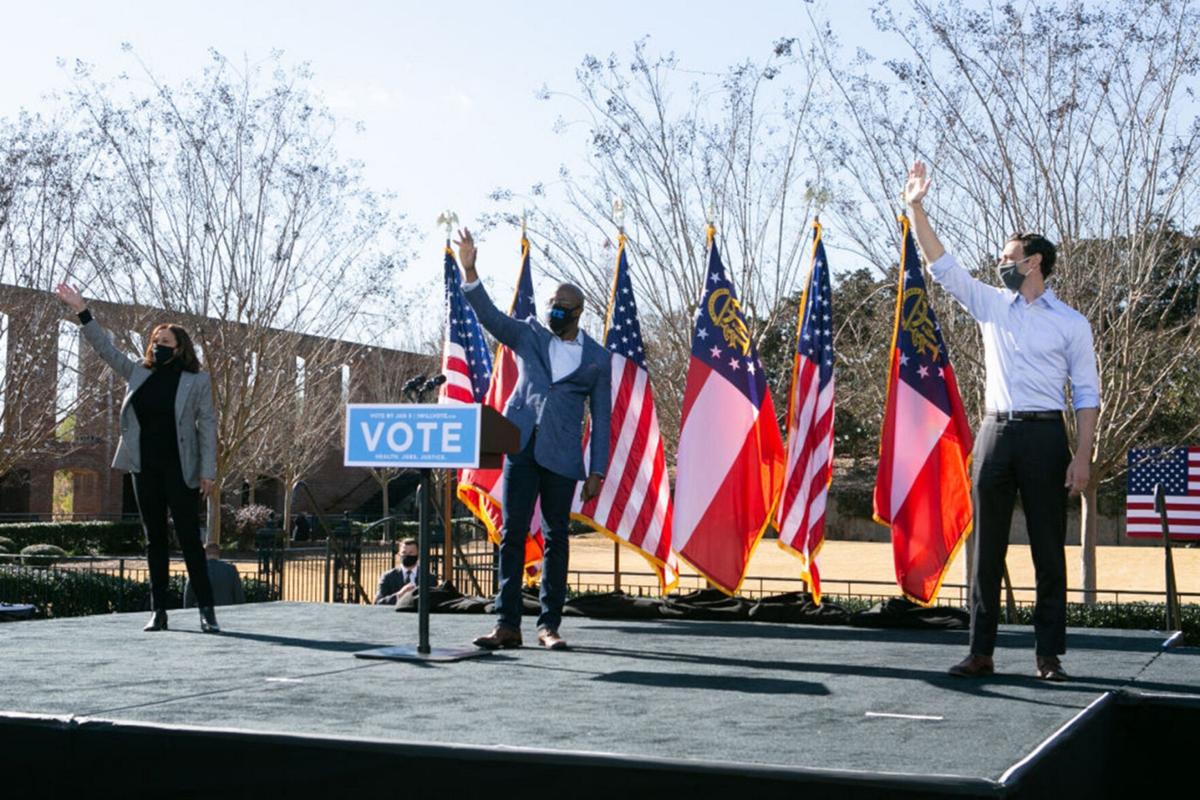 A few hours after being sworn into her new position Wednesday, Vice President Kamala Harris administered the oath of office to three new Democratic members of the U.S. Senate.

Jon Ossoff and Raphael Warnock won runoff elections Jan. 5 in Georgia. And Alex Padilla was appointed to succeed Harris as one of California’s two senators.

The victories that Ossoff and Warnock secured left the Senate with a 50/50 split between Democrats and Republicans. But the Nov. 3 election of President Joe Biden has given the Democrats the advantage.

The vice president casts a ballot in the case of a tie. And, well, we have to believe that Harris will come down on the side of her declared political party more often than not!

Harris became the first woman and person of color to become vice president. She is blazing a trail in public service for many other people who will follow in her footsteps in the years ahead.

With the scales tipped in the Senate in favor of Democrats, other changes occurred. U.S. Sen. Mitch McConnell, R-Ky., lost his title as Senate majority leader. This honor now goes to U.S. Sen. Charles Schumer, D-N.Y.

Schumer’s ascension to this position is excellent news for New York. He will exert more control over legislation moving through the Senate. This way, he’ll be able to ensure our state won’t be on the short end of bills up for consideration.

Democrats now control the Oval Office, U.S. House of Representatives and Senate. They’ll have at least the first two years of Biden’s initial term to pass meaningful legislation, although the filibuster will allow Republicans to block some measures being pursued.

This should result in breaking the deadlock — to some extent — that’s crippled Congress for much of the past decade. Many initiatives have sat dormant for too long because the two parties have been more interested in being the loyal opposition on Capitol Hill than achieving anything worthwhile.

Schumer needs to use his time in this position wisely. There are obviously items that Democrats want to move on: immigration reform, economic relief, the environment, gun control and health care. Bills proposed for each of these will have to be evaluated on their own merit.

The Republicans won’t be able to threaten a filibuster in all instances. For example, it cannot be used to prevent Biden from appointing judges to the federal bench.

But it could be used against many other issues the Democrats want to push. They would need at least 60 votes to override a potential filibuster. That’s a tall order as it will require persuading at least 10 Republican senators to side with them.

This has led to discussions about possibly doing away with the filibuster. While not taking a definite stand, both Biden and Schumer have indicated they’re willing to consider eliminating it.

Doing so may get the Democrats what they want in the short term, but it could come back to haunt the down the road. If Republicans regain control of the Senate in 2022, the Democrats won’t have the filibuster to block legislation they oppose if they get rid of it now.

Schumer and his colleagues must find ways to work more cooperatively with Republicans to move effective bills through the process. One-party rule has severely impaired operations on the state level in Albany, and a Democratic Congress should not merely become a rubber stamp for Biden. The give and take inherent in our system of government has to return to Capitol Hill, with all sides coming away with something of value.

Our government on both sides of the aisle is "hamstrung" or limited in what they are able to do in the coming future. Especially if the 1.9 trillion aid package goes through. The pandemic has put the nation in deep, deep debt there is very little money if any for domestic programs. Right out of the chute Biden is trying to do away with what he feels are unnecessary "evils" like the wall and oil exploration in North Dakota. No congressional support needed there. Biden will hit a wall when he tackles his first annual federal budget we are going to see how bad things are for congress will not be kind to this new president who came from their ranks.

Currently the Republicans are holding up functioning with a demand that Democrats promise not to nix the filibuster. The power sharing agreement has to be worked out so committees can have chairs, and they won't do it until they get what they want. So despite all the crises, it will be hard to act. And this is exactly why the filibuster MUST Go. Schumer should stick to his guns and not give that promise. Let them do their worst. Victory is inevitable, don't sell the long term for the short term.

“holding up functioning” like the democrats did for 4 years? Getting rid of the filibuster isn’t going to happen. Both McConnell and Schumer support maintaining the 60-vote threshold.

Hard to claim democrats held up much for Trump... he moved on a lot of his campaign promises ... and had success.. He would have been re-elected except for his lies...character.. which feed into the media.. As Christ Christi so notably said.. "I think the last eight weeks has been the worst behavior that I have seen by this president in the four years"...

The democrats spent 4 years dividing and now they want unity and to work together!!! Sickening