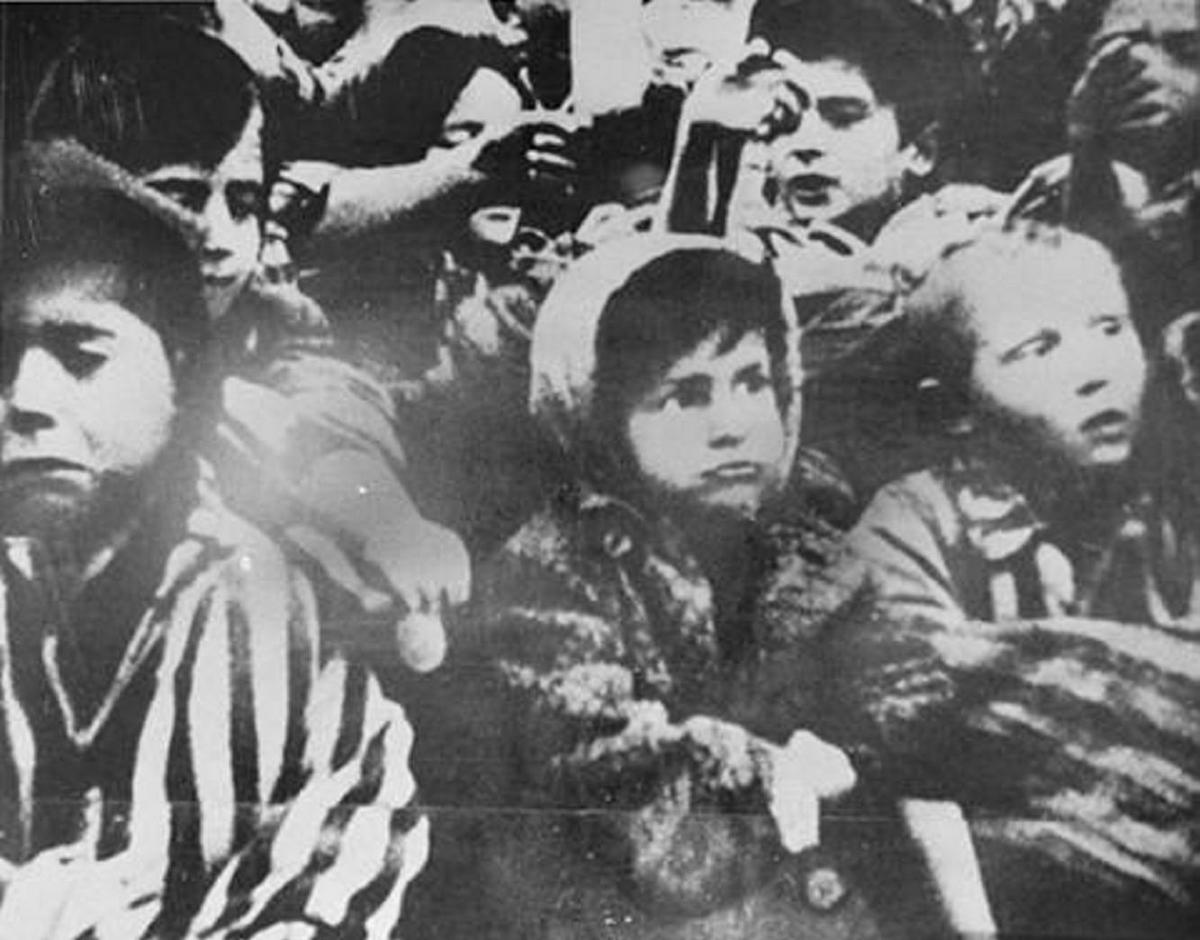 Children who survived their imprisonment at the Auschwitz concentration camp are photographed by Soviet soldiers days after their liberation in January 1945. Photo from United States Holocaust Memorial Museum, courtesy of Yad Vashem 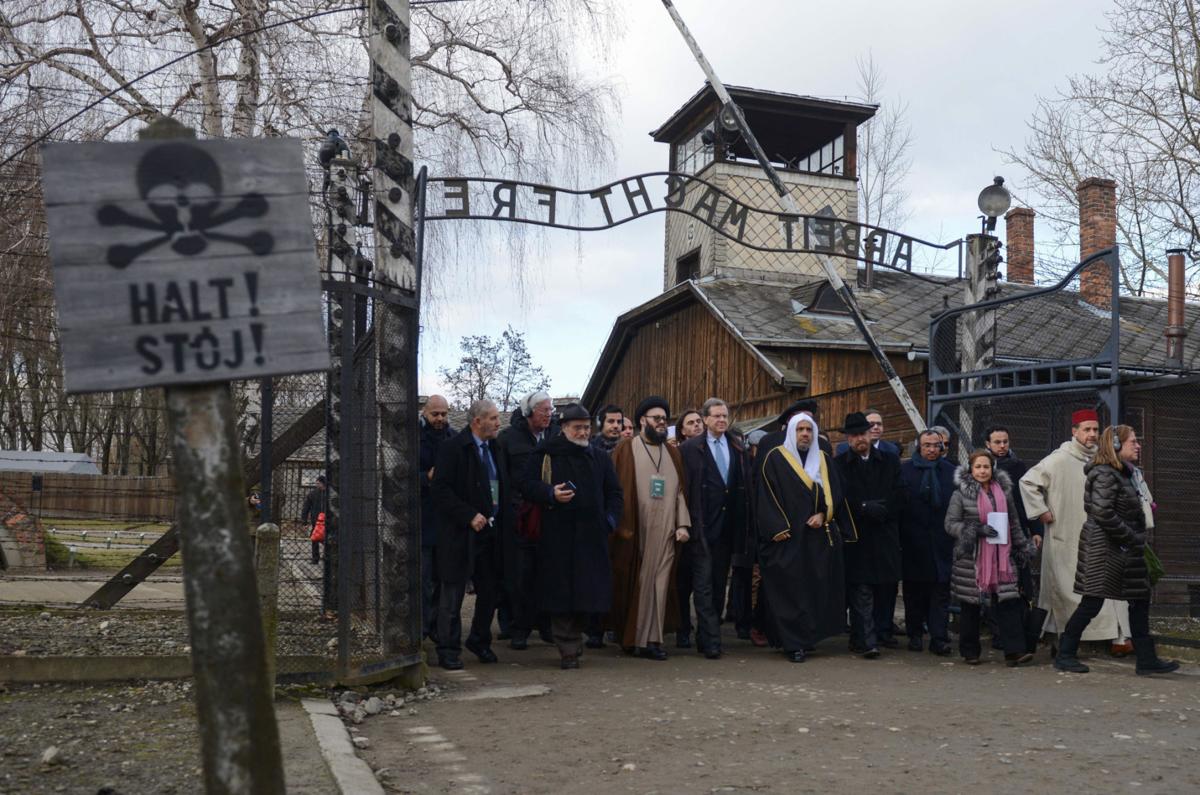 Representatives of the Muslim World League and American Jewish Committee visit Auschwitz last week to commemorate the 75 years since the concentration camp’s liberation during World War II. The Nazis killed more than 1.1 million people at the death camp, most of them Jews. Bartosz Siedlik/AFP via Getty Images/Tribune News Service

Children who survived their imprisonment at the Auschwitz concentration camp are photographed by Soviet soldiers days after their liberation in January 1945. Photo from United States Holocaust Memorial Museum, courtesy of Yad Vashem

Representatives of the Muslim World League and American Jewish Committee visit Auschwitz last week to commemorate the 75 years since the concentration camp’s liberation during World War II. The Nazis killed more than 1.1 million people at the death camp, most of them Jews. Bartosz Siedlik/AFP via Getty Images/Tribune News Service

As Allied troops pressed on to bring World War II to an end, some of them came upon scenes of pure depravity.

Soviet soldiers took possession of Majdanek near Lublin, Poland, the first Nazi concentration camp to be liberated. German troops who staffed the camp tried to destroy evidence of its gruesome functions. But the gas chambers were left intact.

This discovery gave a wider view of what the Germans had attempted to accomplish: annihilate the Jews of Europe. Many people throughout the world had heard of the oppression that Nazis had subjected Jewish individuals to in Germany and the other countries they controlled during the war.

But fewer knew about the series of death camps the Nazis had operated. Those who liberated the prisons often had difficult grasping what to make of them.

The Holocaust, which is how we describe this unfathomable experience, claimed the lives of 11 million people — 6 million of them Jews. More than seven decades after the end of the war, we still grapple with how to process what transpired.

Auschwitz was actually a complex of three camps in Poland: Auschwitz I near Oswiecim, Auschwitz-Birkenau at Brzezinka and Auschwitz III near Monowice. The Soviet army entered the three facilities and freed more than 6,000 prisoners.

The Russians eventually liberated other death camps that year: Gross-Rosen in February, Sachsenhausen and Ravensbrueck in April and Stutthof in May. U.S. troops freed prisoners from camps in German at Buchenwald, Dora-Mittelbau, Flossenbuerg and Dachau in April and Mauthausen in May. British troops liberated camps in Germany at Bergen-Belsen and Neuengamme in April.

This is how Bill Barrett, a journalist with the U.S. Army, described what he saw at Dachau: “There were about a dozen bodies in the dirty boxcar, men and women alike. They had gone without food so long that their dead wrists were broomsticks tipped with claws. These were the victims of a deliberate starvation diet …”

Events marking the 75th anniversary of the liberation of Auschwitz have been held this week. They are a sober reminder of atrocities that elude comprehension and any sense of decency.

“They wore scarves emblazoned with their prisoner numbers, the same ones tattooed on their arms. Many were frail, walking only with the support of friends or relatives. And as they slowly made their way, one by one, to what had been the wall of death, where thousands of prisoners were lined up for summary execution, it was a vivid reminder that before long the last eyewitnesses to the crimes that took place in Auschwitz will be gone,” according to a story published Monday by the New York Times. “The ceremony at Auschwitz culminated a week of events around the world, including a commemoration in Jerusalem attended by dozens of world leaders, who urged collective vigilance against a resurgence of anti-Semitism worldwide. Fifteen years ago, some 1,500 survivors attended the anniversary event. This year, there were about 200, and, for many, it is likely to be their last visit.”

To their credit, many Germans have confronted their nation’s culpability in spreading the rapid anti-Semitism that resulted in the Holocaust. The history of the Third Reich and its barbaric goals are featured prominently in German society.

But repeated acts of hatred against Jewish people around the world reveal an ideology that won’t die.

U.S. Rep. Elise M. Stefanik, R-Schuylerville, guided the Never Again Education Act through to passage this week in the U.S. House of Representatives. If signed into law, the legislation will help teachers access resources to enhance classroom lessons on the Holocaust.

Such efforts are vital if we are to ensure nothing like this occurs in the future. Let’s use this time to recommit ourselves to building a world of love, compassion and understanding.

What's really appalling is that the holocaust wasn't that exceptional. Human history is littered with such mass murders and genocides. Almost every nation is built on bones. A world without such horrors doesn't require a step back, it constitutes progress into something totally new. And long overdue. If we can keep it.

How frequently do you follow the latest coronavirus news?