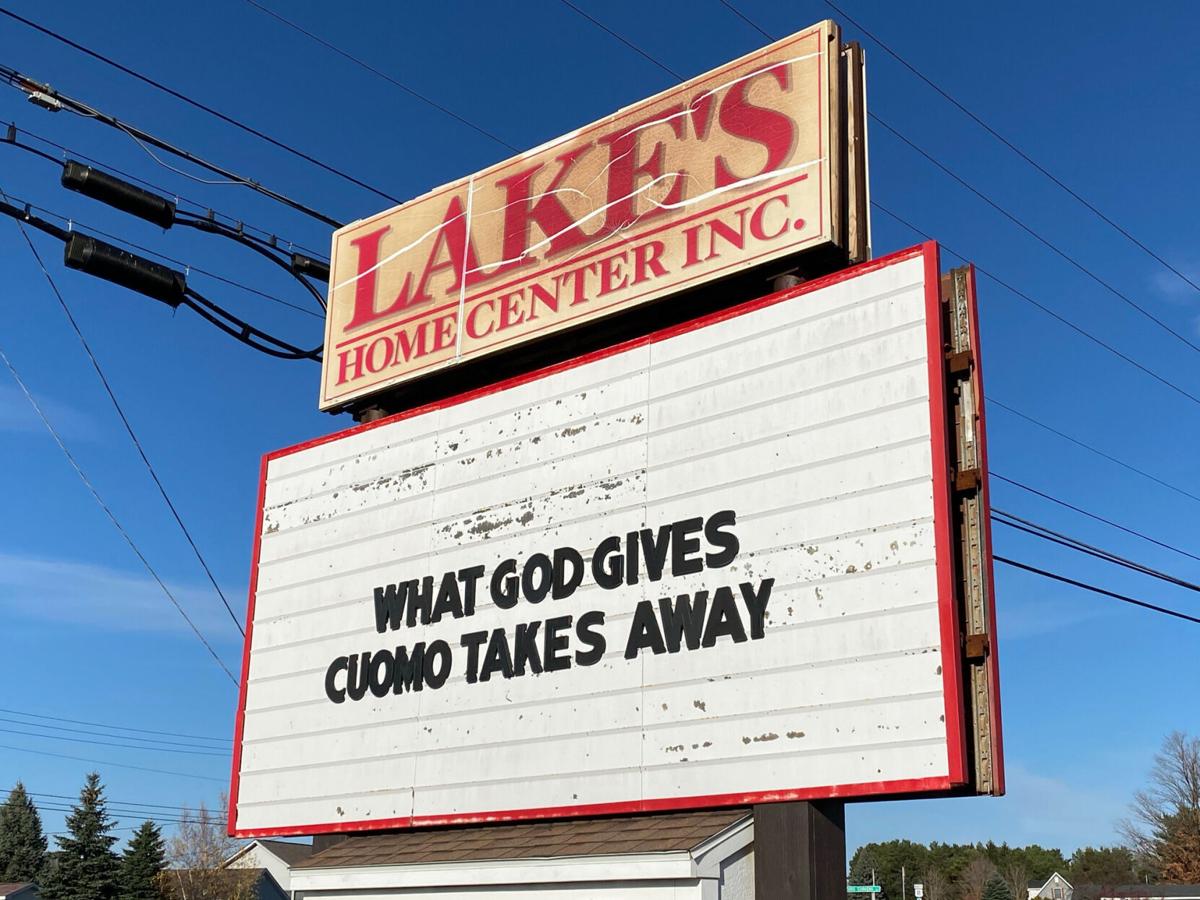 The owners of Lake’s Home Center in Calcium communicate their thoughts about the climate for businesses in New York via a marquee on Route 11. Sydney Schaefer/Watertown Daily Times 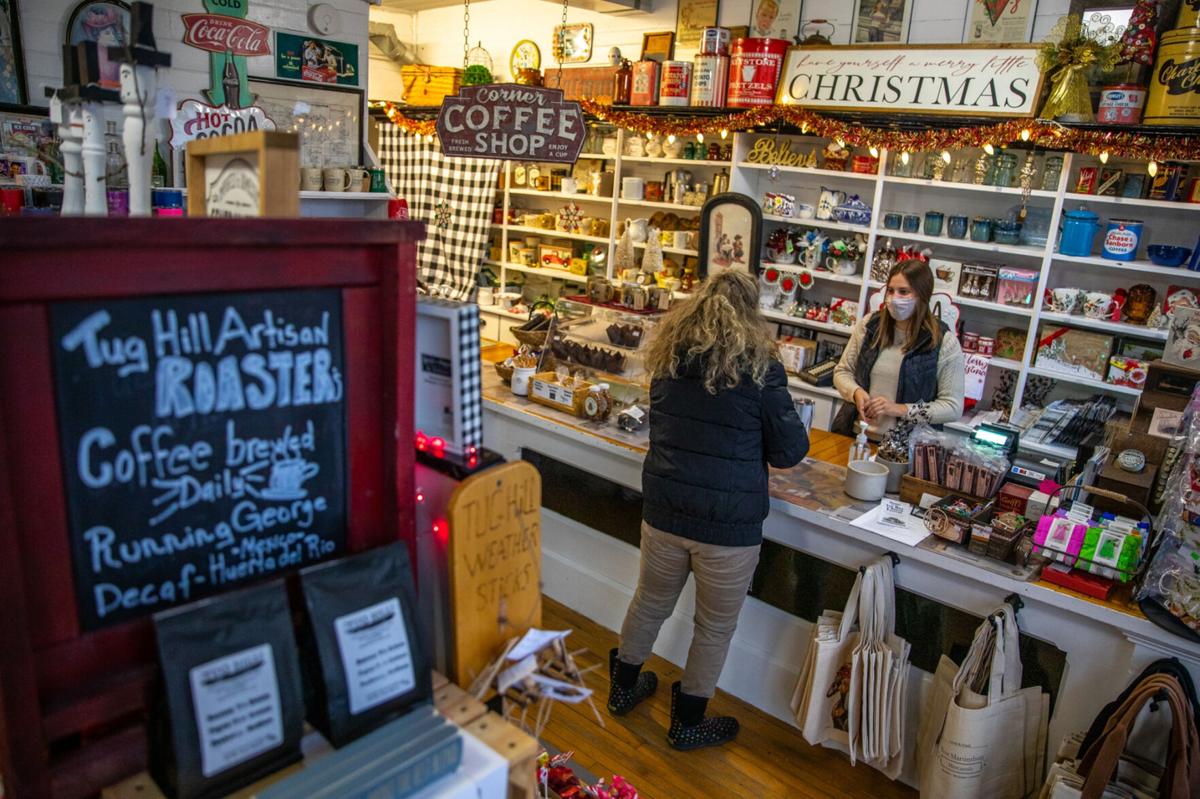 The owners of Lake’s Home Center in Calcium communicate their thoughts about the climate for businesses in New York via a marquee on Route 11. Sydney Schaefer/Watertown Daily Times

Many businesses throughout New York were severely hurt by the novel coronavirus pandemic.

On this page, we raised concerns early in the pandemic about how Mr. Cuomo was treating businesses in all regions of the state. Not every area was just like New York City, which experienced the worse problems at the start of the health care crisis. Forcing all other regions to follow the same rules didn’t make sense.

Mr. Cuomo eventually adopted a more flexible strategy for enforcing coronavirus regulations, and we approved of this new approach. Areas with better metrics were allowed more leeway as to how their businesses operated.

The overall effect on virtually all business, though, has been harsh. It’s been a dismal year for them. And their workers have been hit as a result, with many losing their jobs or having their hours cut.

If there was ever a year where New York officials should ease back on their nanny state demands of companies, it’s 2020. Their normal business-as-usual mindset of micromanaging companies didn’t work well in better times, and there’s no way it would do any good this year.

However, common sense is not often the modus operandi of state officials when dealing with companies. They will exact their pound of flesh regardless of the consequences for small shops and large firms along with their employees.

While disappointing, it was not surprising to discover that increases in the state’s minimum wages will be carried out as planned. This will hurt companies at the end of a year they’d like to forget.

“On Wednesday, the state Department of Labor announced the planned increases to the minimum wage for workers in upstate New York, Long Island and Westchester County will be moving forward, despite calls to pause. In upstate New York, the minimum wage will increase by 70 cents on Dec. 31, from $11.80 per hour to $12.50. In Long Island and Westchester County, the minimum wage will increase by $1, from $13 per hour to $14 per hour. In New York City, employers with more than 10 employees had their minimum wage increased to $15 by the end of 2018, and those with fewer than 10 employees had it set to $15 at the end of 2019,” according to a story published Thursday by the Watertown Daily Times. “While Long Island and Westchester County are set to reach the $15 per hour mark by December 2021, increases for the rest of the state do not have set timeframes to achieve that mark. According to the Department of Labor, increases for upstate are decided based on an annual review of the increase’s impact on local economies.”

State Sen. Patricia A. Ritchie, R-Heuvelton, was one of 11 Senate Republicans to sign a letter asking Mr. Cuomo to at least postpone the wage increases. But this request was ignored.

We certainly recognize that most workers need to earn higher incomes to make ends meet. But if their companies cut staffs or close their doors, they’ll be directly hurt as a result. Numerous workers are now working remotely from home permanently due to the pandemic. This means more firms can move out of New York and relocate in states with fewer financial hurdles.

Companies require time to recover from this pandemic. Compelling them to raise wages now is a recipe for disaster.

They fight against minimum wage increases before a pandemic, during it, and after it. There isn't a time they don't fight against them.

When the pandemic is over, and states and cities across the country return to non-pandemic matters, leaders will resume passing minimum wage increases with even greater passion and expediency than before. GOP business defenders can continue their fight against them, ignoring the will of 3/4 of Americans (Democrats and Republicans) who support them, and stunning them with their brutish and pitiless business-first ideology at the expense of struggling working-class Americans and their families. Blather on. Noise. No one is listening.

Call us ontologically changed by the pandemic (if not before).

The "sweaters" you people wear are musty, old, prickly, and full of holes.

If a business is being hurt by the pandemic, then it has fewer employees because it's doing less business. In effect, it's smaller (though proportioned differently since some things don't scale as easily as workforce). That has nothing to do with paying employees less per employee. You might still complain about that, but bringing in a third party (COVID) is not germane.

Obviously you never ran a business or got a degree in economics.

Ignorance of the law (of economics) is no excuse. You sir, don't know what you're taking about. Much of the economics of running a business has to do with volume of sales and revenue. Anyrhing that interferes with that volume can ruin the business in a hurry.

Not following this logic RDS...your costs just went up..not just salaries but costs linked with salaries.... the status of small businesses is too fragile to add any additional expenses until Covid is under control...

A business that can only survive by paying extremely low wages relies on low wages regardless of other conditions like the pandemic. Raising the minimum wage weans consumers off of consuming what such businesses sell. Taco Bell has lines out to the street. They'll be able to raise their prices to cover higher wages, or just take a lower profit on all that volume. A nail salon that is halfway closed and unable to survive without paying very low wages is selling cheap labor, not tasty tacos. If it cuts to one chair instead of three, then that means it's now a smaller nail salon. It's problem is that it pays rent on too big a space (which it needs because of COVID), not that it pays its one remaining nail tech more. If it isn't so in demand why can't it raise its prices to cover that difference? Because the only reason people go there is because prices are so low? The rent on the big space it can't fully use is what puts it out of business, not the higher rates it has to pay it's best tech. Covid isn't the problem, the business model is the problem.