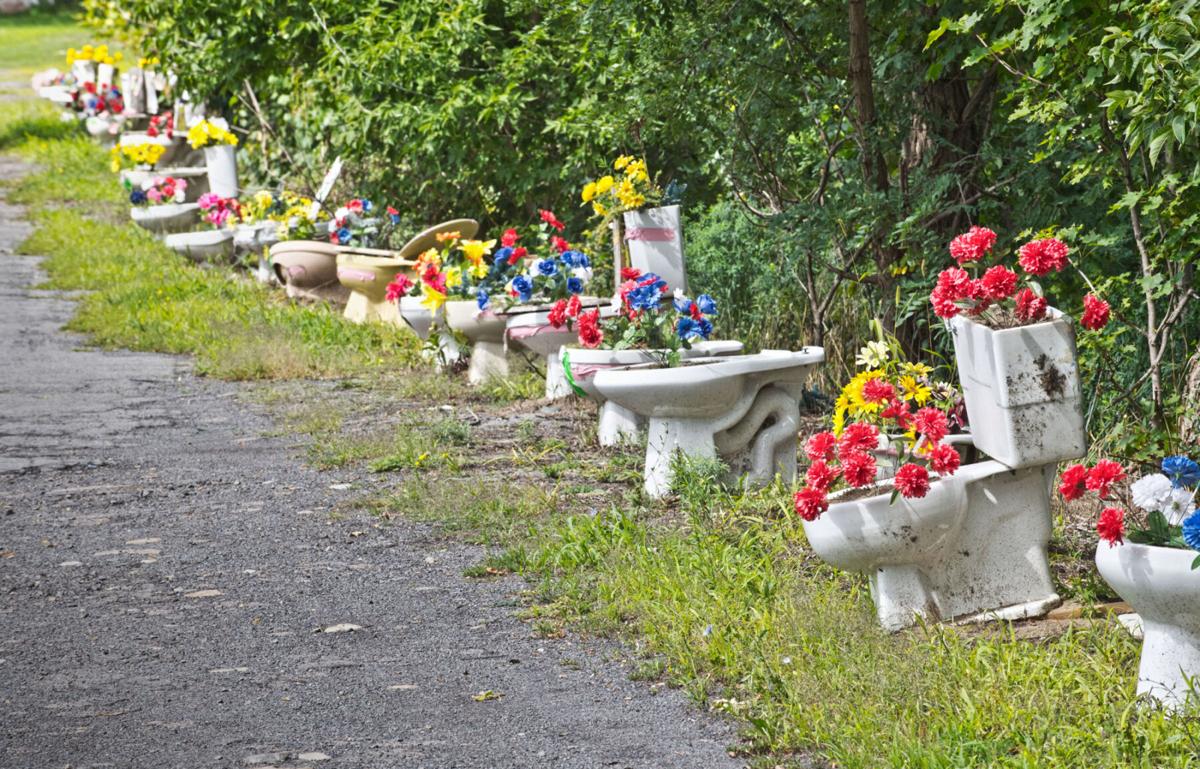 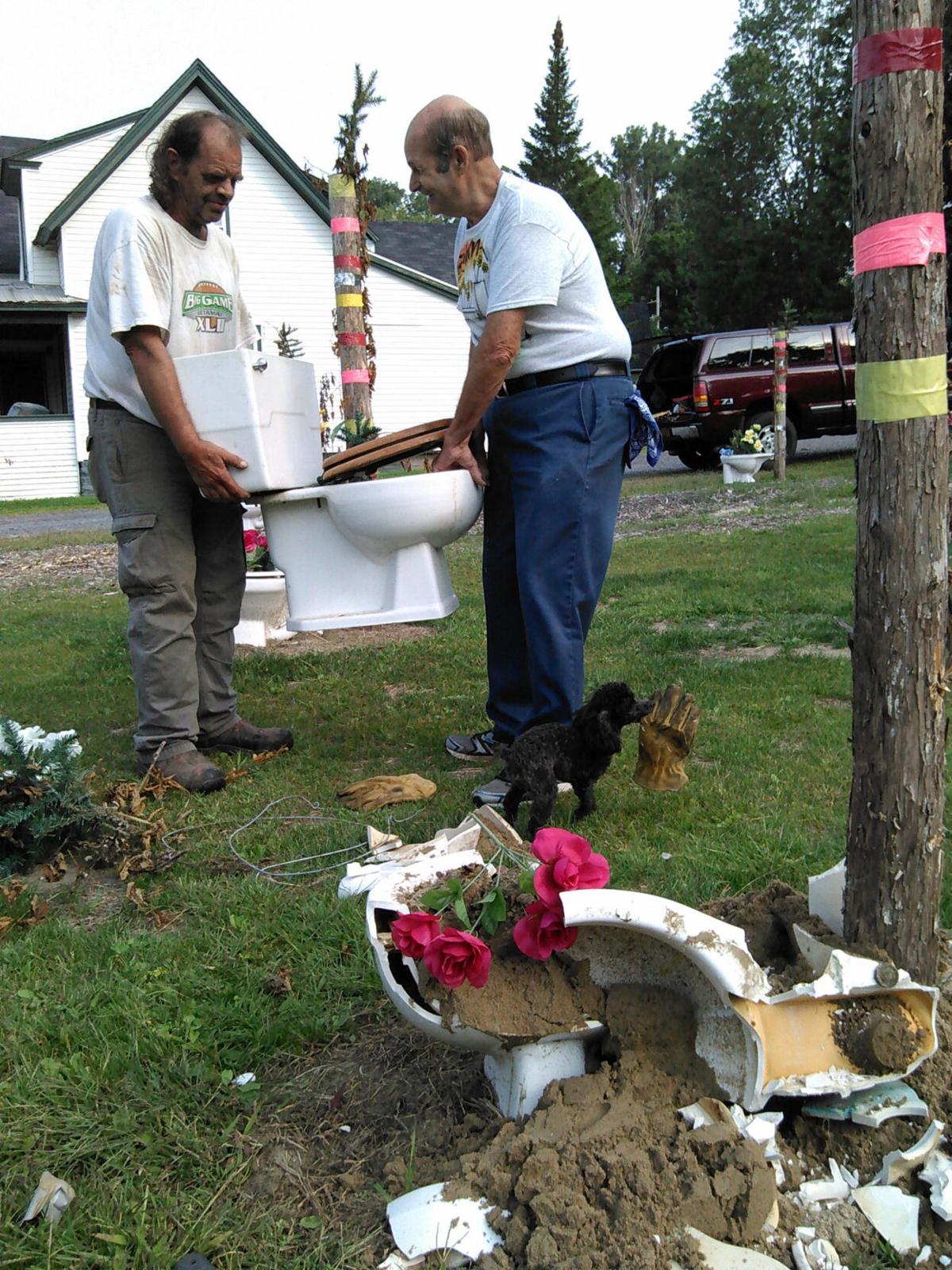 Frederick J. Robar Sr., right, and Joseph Charleson carry a new toilet to replace one that was damaged at his Potsdam property in 2015. Watertown Daily Times

Frederick J. Robar Sr., right, and Joseph Charleson carry a new toilet to replace one that was damaged at his Potsdam property in 2015. Watertown Daily Times

For years, the village of Potsdam has been trying to compel Frederick J. Robar Sr. to conceal from public view the toilet gardens he has displayed on his properties.

Needless to say, officials have not succeeded. Mr. Robar has confronted them every step of the way, and he’s racked up some important victories.

“Mr. Robar popped onto the village’s radar in 2004 when he asked to get a zone change at his property on 82-84 Market St. so he could sell it to a buyer who would put in a Dunkin’ Donuts. When the village denied his request, he set up what is referred to now as a toilet garden. Since then, he and the village have butted heads twice inconclusively and unsuccessfully in the village court system,” a June 30 article in the Times reported. “In 2008, the village issued Mr. Robar an appearance ticket for a code violation. Mr. Robar argued that the toilet gardens are art and it’s his First Amendment right to have them. The case was dismissed because code enforcement officer John F. Hill failed to bring documents to the court. In 2010 the village tried again, but after the presiding judge resigned amid cocaine-use allegations, the case was dropped and the village decided not to pursue it.”

In early December 2018, members of the Potsdam Village Board of Trustees passed a junk storage law. The statute specified what constitutes junk, describing it as anything worn out and of little or no value. It also specifies that this can describe broken-down motor vehicles (including motorcycles and trailers) or motor vehicles that have been unused for six months, household appliances, furniture, garbage or bathroom fixtures such bathtubs, sinks or toilets!

Village Administrator Gregory O. Thompson said board members had no intention of targeting Mr. Robar by passing the junk storage law. He said previous laws pertaining to outside junk had not done enough.

“They weren’t very specific,” Mr. Thompson said in a story published Dec. 4, 2018, by the Watertown Daily Times. “They didn’t give code enforcement enough enforcement capabilities, so we talked to our attorney and said, ‘How do we fix this,’ and this is what we came up with.”

And, indeed, the village has issued tickets to other residents for violating the law. But it’s difficult accepting officials didn’t have Mr. Robar’s displays in mind when they passed this statute.

Mr. Robar has contended that his toilet gardens represent his artistic expression as well as a form of protest. After being cited by the village for the toilets on his seven properties (10 Pine St., 79 Maple St., 81-83 Maple St., 85 Maple St., 87 Maple St., 82 Market St. and 84 Market St.), Mr. Robar filed a federal lawsuit claiming that his rights under the First and 14th Amendments as well as the Visual Artists Rights Act of 1990 were being violated. He’s seeking $7 million in damages.

The village filed a motion this week to have the case dismissed.

“It is clear that the [junk storage law] does not prohibit plaintiff from politically protesting or moving his ‘junk’ to another location on his properties or with conditions (such as screening) at the location where the ‘junk’ is currently placed,” the village’s response reads. “Thus, the JSL simply has an incidental effect on the way plaintiff desires to express his discourse with the village denying his SUP application more than fifteen (15) years ago but does not prevent it. Clearly, the legislative intent of the JSL is to protect the health and safety of the public as well as to preserve the character of the village, maintain the village’s appearance at the highest level and to preserve property values.”

So the village admits that officials are most concerned about how Mr. Robar’s toilet gardens look! If they were worried about health and safety issues stemming from such items being left out in the open, wouldn’t they still be problems if his toilets were moved “to another location on his properties”? Are they only health and safety risks when residents can see them?

The village does not have a good track record when it comes to challenging Mr. Robar, and this lawsuit seems headed in the same direction. Officials should accept that the toilet gardens are here to stay and drop their opposition before it costs even more money.

"People care much more for how things look than how things are." (An author)

How things are in Potsdam matter more than how things look.

When Potsdam folks are tolerant, open-minded, patient, and respectful of the rights of others, they will pale into insignificance the appearance of toilets.

Prep yourself for the abandoned vehicles and trash cans with graffiti on front lawns and called "art"... The good news is your taxes should go down when property values drop... more St Lawrence Country chaos...