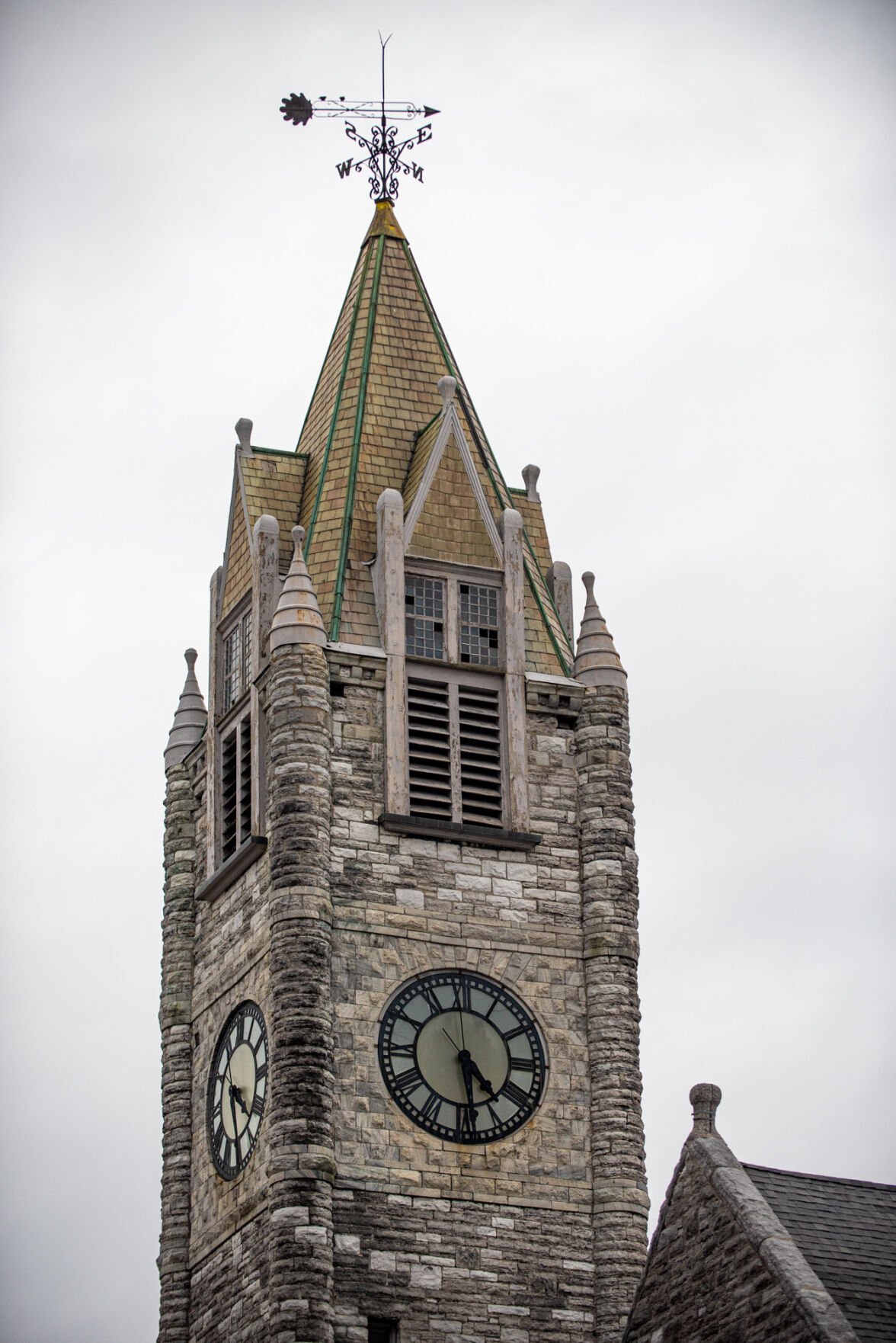 Steven S. Massaro, a local mechanic with more than 40 years of experience, donated his time and expertise to bring the clocktower at First Baptist Church in Watertown back into working order. Kara Dry/Watertown Daily Times 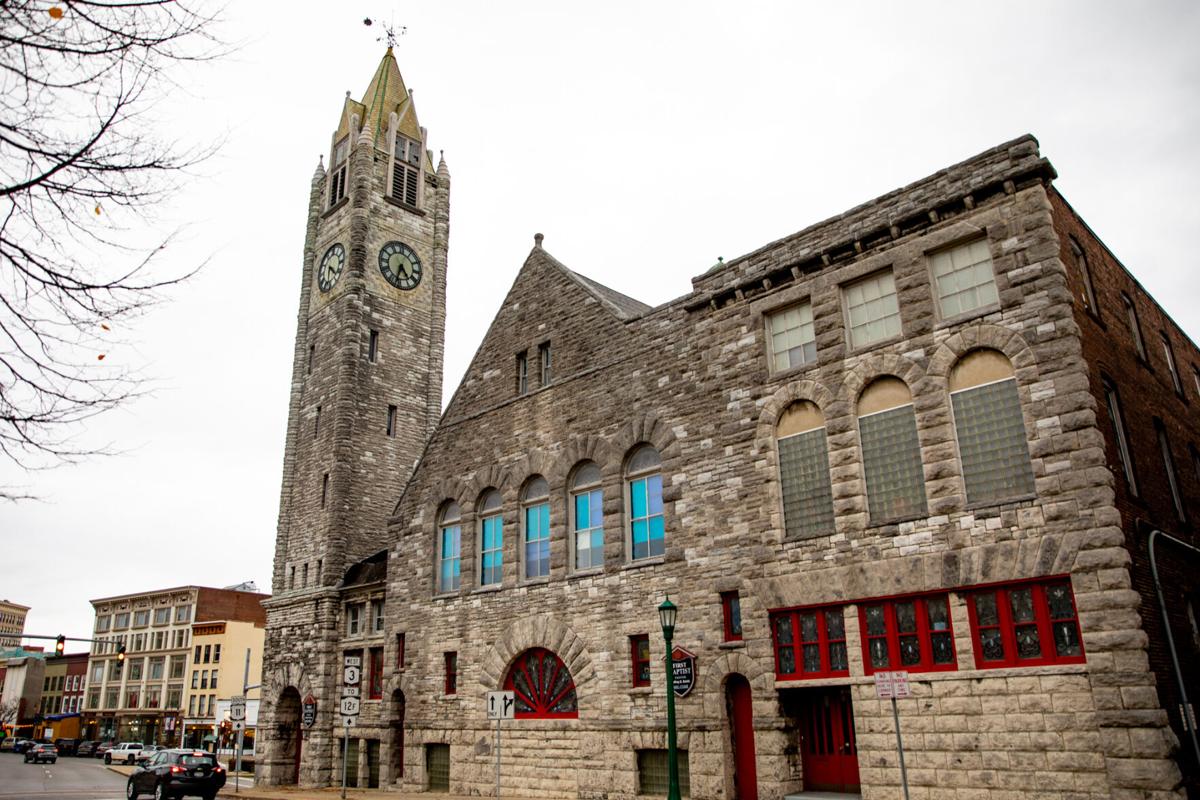 A centerpiece of Watertown’s Public Square, bells in the clocktower at First Baptist Church in Watertown ring every half-hour thanks to recent repairs. Kara Dry/Watertown Daily Times

Steven S. Massaro, a local mechanic with more than 40 years of experience, donated his time and expertise to bring the clocktower at First Baptist Church in Watertown back into working order. Kara Dry/Watertown Daily Times

A centerpiece of Watertown’s Public Square, bells in the clocktower at First Baptist Church in Watertown ring every half-hour thanks to recent repairs. Kara Dry/Watertown Daily Times

When looking eastward upon Public Square, it’s usually the first structure people notice. It incorporates the beautiful limestone and marble used to construct the church at State and Mill streets in 1891.

The tower was a daunting sight in Watertown during the late 19th century. However, the clock and bells weren’t added to it for another decade.

Other buildings have come and gone in the city’s downtown. The tower, though, was a comforting symbol of stability and tradition.

But for the past several years, First Baptist Church has been missing something vital: the sound of its bells. While the tower has filled the sky with its majestic stature, the muted bells have not filled the air with their glorious ringing. In addition, the clock was not functioning as it should.

This portion of Watertown was incomplete.

Thankfully, Steven S. Massaro has taken on the task of restoring the clock and bells to working order. Watertown has owned these fixtures for decades, and the City Council approved his proposal to repair them two months ago. The church’s trustees also gave the plan their blessing.

Mr. Massaro is a mechanic with more than 40 years of experience. The clock and bells were previously maintained by an employee of Knowlton Technologies. But the city terminated its contract with the firm due to concerns that the tower was unsafe for people to enter.

Getting the clock and bells operating again has been complicated.

“Mr. Massaro said when he first saw the clock shortly before the council voted to allow him to work on it, it was non-functioning. The first major issue Mr. Massaro identified was that the linkage between the clock and its bells was missing,” according to a story published Oct. 29 by the Watertown Daily Times. “He said once he repaired that linkage, the bells immediately started ringing, although not at the proper times. … The solution to that issue was to reset the time on the clock, to bring it back into line with standard time. But Mr. Massaro said it isn’t very simple to reset the clock. It’s an E. Howard & Co. clock, initially designed in the 19th century to be mechanically driven with pendulums and weights. Originally installed in 1901, Mr. Massaro said the clock machinery has been worked on and changed a number of times, and the clock is now electrically operated. With the age of the clock’s mechanics, the large amount of work that’s been done on it in the 119 years since it was installed and without any of the original documentation available, Mr. Massaro said changing the clock’s set time wasn’t a viable option. Instead, he simply turned it off.”

Mr. Massaro has managed to get the clock and bells functioning properly. However, this is just the beginning.

“So now the clock strikes noon at noon, but Mr. Massaro said there’s more work to be done. The hands on all four faces currently suffer from something called ‘hysteresis,’ where the degradation of the gears that drive the hands has [led] each face to show a slightly different time,” the article reported. “It also needs a number of new bearings, axles and gears. The clock also requires a significant amount of regular maintenance, which Mr. Massaro said he’s taking on himself. Every week, … he climbs the numerous flights of stairs to get to the clock’s mechanicals and oils up all the gears and pulleys. He said with good service, the clock could easily last another century.”

It’s wonderful that Mr. Massaro has agreed to carry out this mission. But the church building and tower also need restoration work, which will require substantial money. We encourage residents to help members of the congregation devise a plan for a restoration project and identify sufficient funding.

One prayer has already been answered for First Baptist Church. Let’s all hope that the community comes through with another miracle.

I'm really glad the clock is working. Now, follow with your eyes as we work our way down the bell tower. There are some doors at the bottom. Walk through those doors with an open mind and heart and you will truly find "music to your ears".

How much do you plan to spend on gifts for the holidays this year?