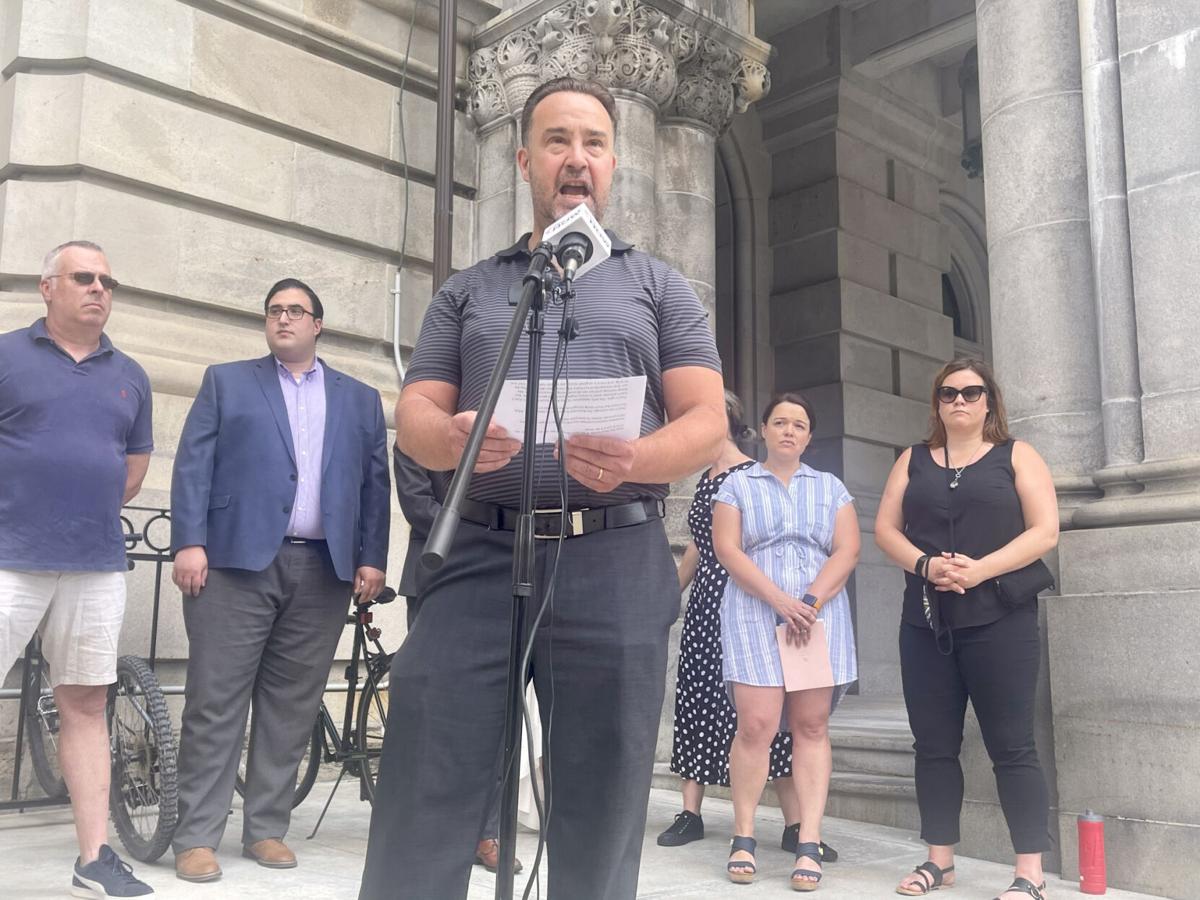 Jason Gough, a survivor of childhood sexual abuse, advocates in front of the state Capitol in June for the Assembly to pass the Adult Survivors Act before session ended. Kate Lisa/Watertown Daily Times 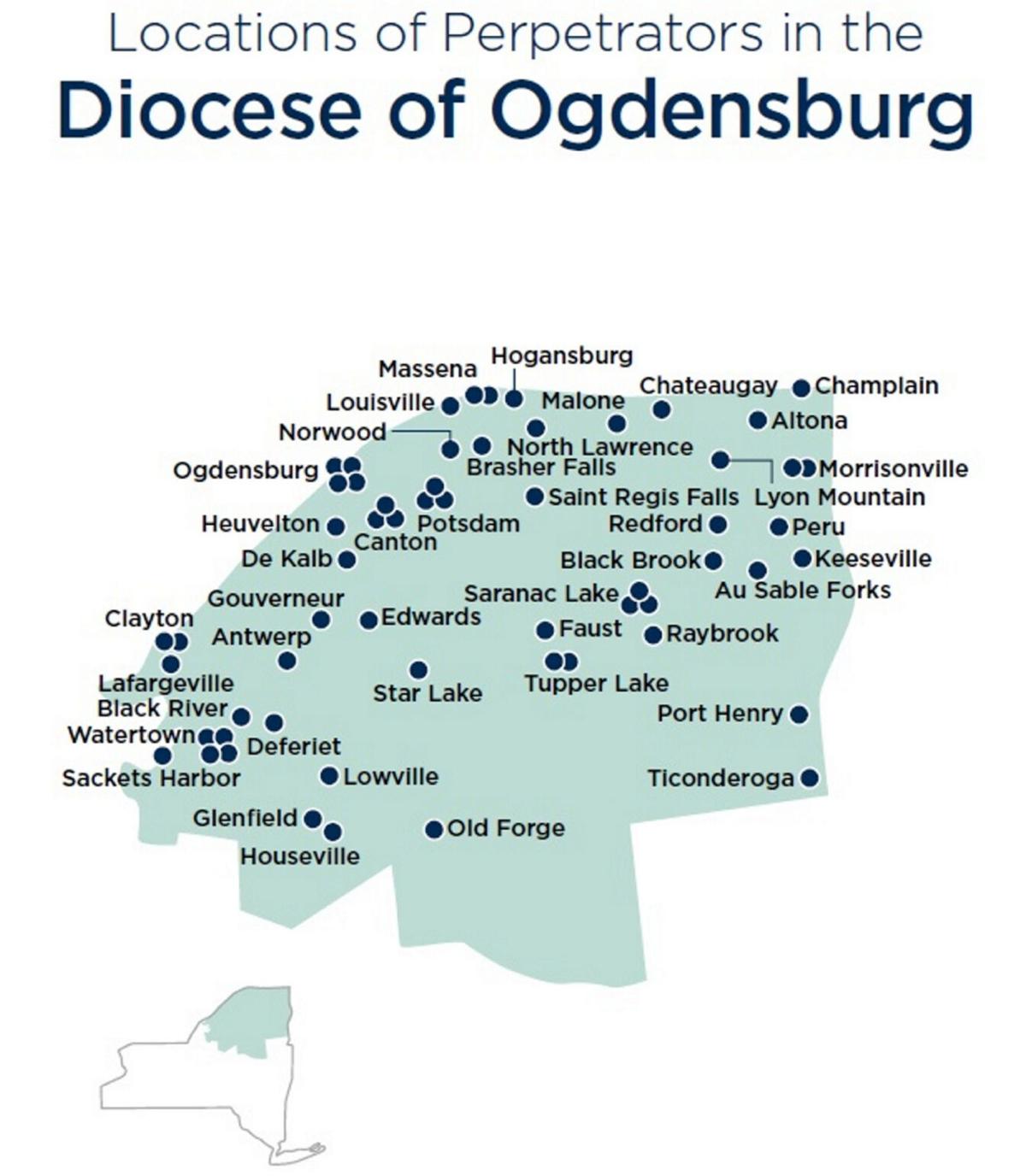 The names of priests associated with the Roman Catholic Diocese of Ogdensburg who are accused of sexually abusing children were made public in 2018 by a law firm representing victims of child abuse. Submitted photo

Jason Gough, a survivor of childhood sexual abuse, advocates in front of the state Capitol in June for the Assembly to pass the Adult Survivors Act before session ended. Kate Lisa/Watertown Daily Times

The names of priests associated with the Roman Catholic Diocese of Ogdensburg who are accused of sexually abusing children were made public in 2018 by a law firm representing victims of child abuse. Submitted photo

Since state legislators passed the Child Victims Act two years ago, more than 9,000 lawsuits were registered in New York’s e-filing system against sexual predators and organizations accused of enabling them.

The law in part gave people who endured sexual abuse as children an opportunity to file claims against their perpetrators long after the statute of limitations expired. It also offered prosecutors more time to seek criminal indictments against suspects.

This act provided a window of one year to take civil action. But this was extended by a year in 2020 due to the novel coronavirus pandemic. The health care crisis affected the ability of the court system to process claims.

The deadline for civil action expired Friday. The number of cases filed showed this was the right move on the part of the state Legislature.

“More than half of the total civil claims allege sexual abuse by priests and other clergy affiliated with or employed by every diocese network in the state: Ogdensburg, Syracuse, Rochester, Buffalo, Albany, Brooklyn, Rockville Centre and the Archdiocese of New York. Other cases involve the Boy Scouts of America, teachers, coaches and school districts,” according to a story published July 30 by the Watertown Daily Times. “Law firms across the state have strengthened efforts to assist victims, most having come forward after decades and others pursuing litigation in cases from the 2000s.

“[The New York City office of Jeff Anderson & Associates] developed an online Child Victims Act dashboard that tracks case filings involving Catholic institutions by diocese. Across the roughly 3,300 cases that name a diocese, about 1,700 perpetrators are accused,” the article reported. “As of May 31, according to the dashboard, 87 cases involving 46 alleged perpetrators have been filed against the Diocese of Ogdensburg, which covers all of St. Lawrence, Franklin, Clinton, Jefferson, Lewis and Essex counties, and parts of Herkimer and Hamilton counties. The diocese operates 99 parishes, nine schools and nearly 30 programs, according to its website.”

A similar piece of legislation being considered in Albany would have opened a window for people who have been sexually abused as adults to files lawsuits as well. While it passed unanimously this year in the state Senate, it failed to advance in the Assembly.

“The Adult Survivors Act — modeled after the Child Victims Act — would allow New Yorkers who suffered sexual abuse after the age of 18 to file civil lawsuits against their abusers for one year, regardless if statutes of limitations on legal claims have expired. Adult sexual abuse is common in the modeling and acting industries — such as convicted rapist and former film producer Harvey Weinstein — and in the athletic world, as stories of abuse mount from Olympic trainers and coaches, doctors and many others,” according to a story published Wednesday by the Watertown Daily Times. “The bill died in the Assembly Judiciary Committee. Lawmakers and advocates have struggled to get a clear answer about the reason the bill did not pass in the Assembly before session ended June 10.”

The public response to the Child Victims Act showed that passing this law was essential. Creating a companion law for adults is just as important, and legislators need to move on this proposal as soon as possible.

Survivors, advocates and members of the public are looking for two things right now- passage of the Adult Survivors Act and the final report on the AG's investigation into the nine Catholic dioceses in NY. Why are both delayed?