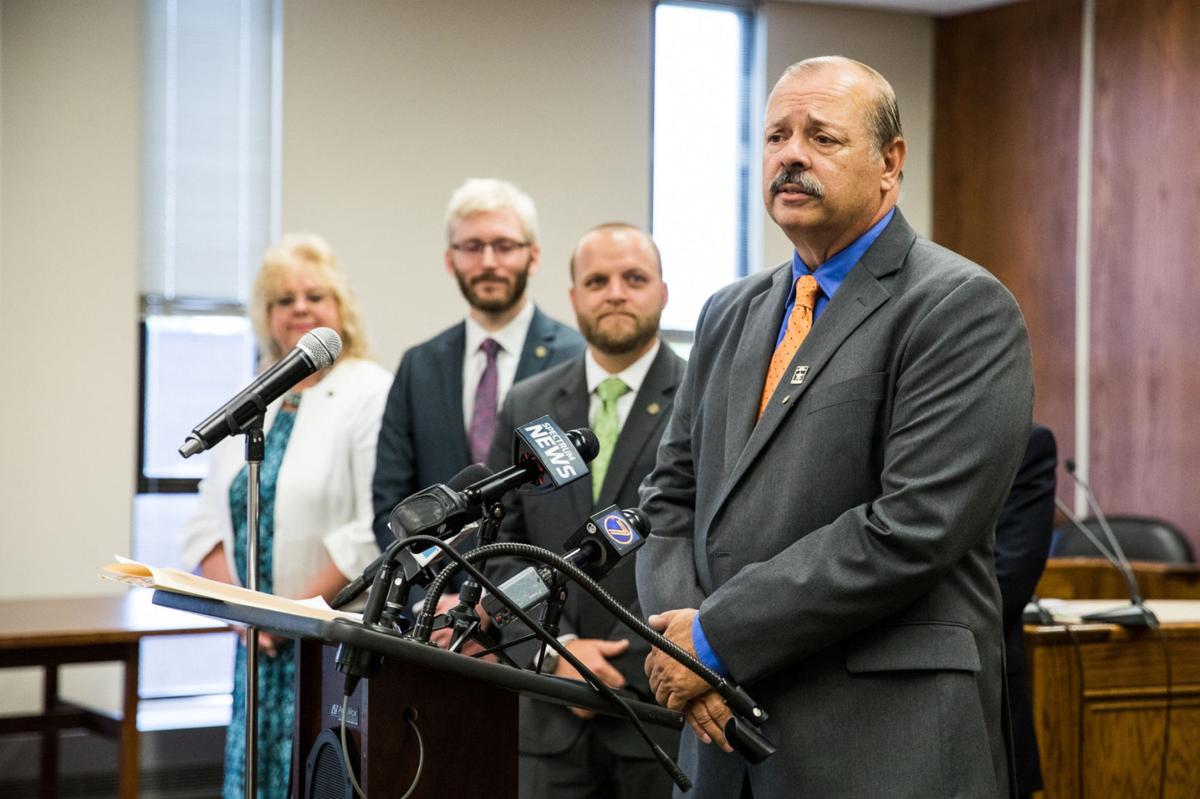 Richard M. Finn, right, speaks at a news conference in July 2018 after members of the Watertown City Council announced his selection as the new city manager. Sydney Schaefer/Watertown Daily Times

Richard M. Finn, right, speaks at a news conference in July 2018 after members of the Watertown City Council announced his selection as the new city manager. Sydney Schaefer/Watertown Daily Times

Shortly after Richard M. Finn was named Watertown’s new city manager nearly two years ago, a blog called Geneva Believer made some uncomplimentary remarks about him.

A story published July 14, 2018, by the Watertown Daily Times reported the following: “Numerous former employees accused Mr. Finn of ‘bullying’ and ‘harassment,’ and being ‘belligerent,’ ‘disrespectful,’ ‘unprofessional,’ ‘a dictator’ and ‘liar,’ according to the blog. Many of those employees complained of mistreatment and being retaliated against, forcing them to leave their jobs.”

Mr. Finn was a finalist for the city manager’s job in Geneva when he was offered this spot in Watertown. The Geneva Believer blog said he had left previous positions “following accusations of harassment, discrimination, misconduct and racism during his career,” the Times story reported.

When asked by the newspaper about the disparaging comments, Mr. Finn said the blogger — Geneva resident Jim Meaney — was lashing out because he wanted someone else to take over the job in that community. Mr. Finn then displayed one of the many flaws with his management style by stating: “I think I’m sort of a victim.”

Wow! He’s been repeatedly accused of demeaning and belittling his subordinates, but he’s the one being victimized? We can now see the price that Watertown paid for his arrogance.

There have been other assertions. An April 18, 2002, story in the Washington Post said that he reportedly told a Takoma, Md., resident that he’d seek to have her children taken away from her if she didn’t leave her home, which was scheduled to be razed. These accounts show a disturbing pattern that city officials should have taken more seriously.

Mr. Finn resigned as city manager Friday from his $122,210-a-year position. His departure closes a sad chapter in the city’s history. City Council members last week reviewed an investigation completed by the Glenville-based Public Sector HR Consultants into a complaint filed against him by city Parks and Recreation Superintendent Erin E. Gardner.

She accused him of creating a hostile work environment. According to a Nov. 8 article by the Times, she “submitted reports of a series of incidents involving Mr. Finn and witnesses who could verify the alleged occurrences.”

Similar assertions made by Mr. Finn’s former subordinates in previous communities were available to council members when they hired him in mid-July 2018. They said he was forthcoming about some of the allegations against him when they interviewed him.

But they acknowledged that some of the claims that came to light surprised them, meaning Mr. Finn didn’t reveal everything to them out there. They defended their decision to select him before unanimously voting to approve his appointment a few days later. So they were aware of the controversies surrounding his previous positions but brought him on board anyway.

In sifting through a candidate’s background, hiring managers find it difficult separating facts from rumors. They want to give these people the benefit of a doubt but don’t always know where to draw the line.

Unfortunately, the report into Ms. Gardner’s complaint will likely never see the light of day. It’s true that it deals with Mr. Finn’s employment history with the city, and much of this information is considered confidential.

However, this can create obstacles for future employers in determining an individual’s credentials for a vacant position. Members of the Watertown City Council persuaded themselves in 2018 that they need not worry about the allegations concerning Mr. Finn. They were wrong to do so.

How certain can council members now be about pending candidates for the city manager’s job? What assurances will other municipalities have in Mr. Finn’s qualifications for any open positions they offer?

There must be some accommodation for public bodies to access pertinent information about candidates for key spots. Good governance depends on appointing the right people, and obtaining a fuller picture of a candidate’s past is critical to accomplishing this goal.

In the meantime, city officials must use available resources to vet potential employees — and this is where community journalism shows its value. News reports may well detail troubling instances in a candidate’s past, and authorities shouldn’t ignore this information.

I don't see this as the end of a sad chapter. I see it as the beginning of a long, sad, chapter. Anti-media sentiment, media disrespect, "fake news," institutional distress in the newspaper industry, the inclination of people to rely on news that they are ideologically in sync with (tribalism), etc.-- all of these and more have eroded our long held respect for, dependence on, and trust in reliable journalism. Today we are free to blow it off, ignore it, disagree with it, etc. That it's reliable no longer means we must perceive it as so. When we don't, no one holds us accountable. Today, the public domain has relegated reliable news to weak news. That its weakness opens the door to poor decisions and corruption and weakens democracy are dangers we are unwilling to face... that is until reliable journalism is gone. Much is written on how the absence of reliable journalism imperils communities and people.

I ask that city council members to read it.

I wonder what was the discussion among Watertown City Council that resulted in ignoring serious problems with Mr. Finn and resulted in the unanimous vote to hire him. I suspect there was a very high level of rationalization, which always results in poor decisions and more cost for the City of Watertown.